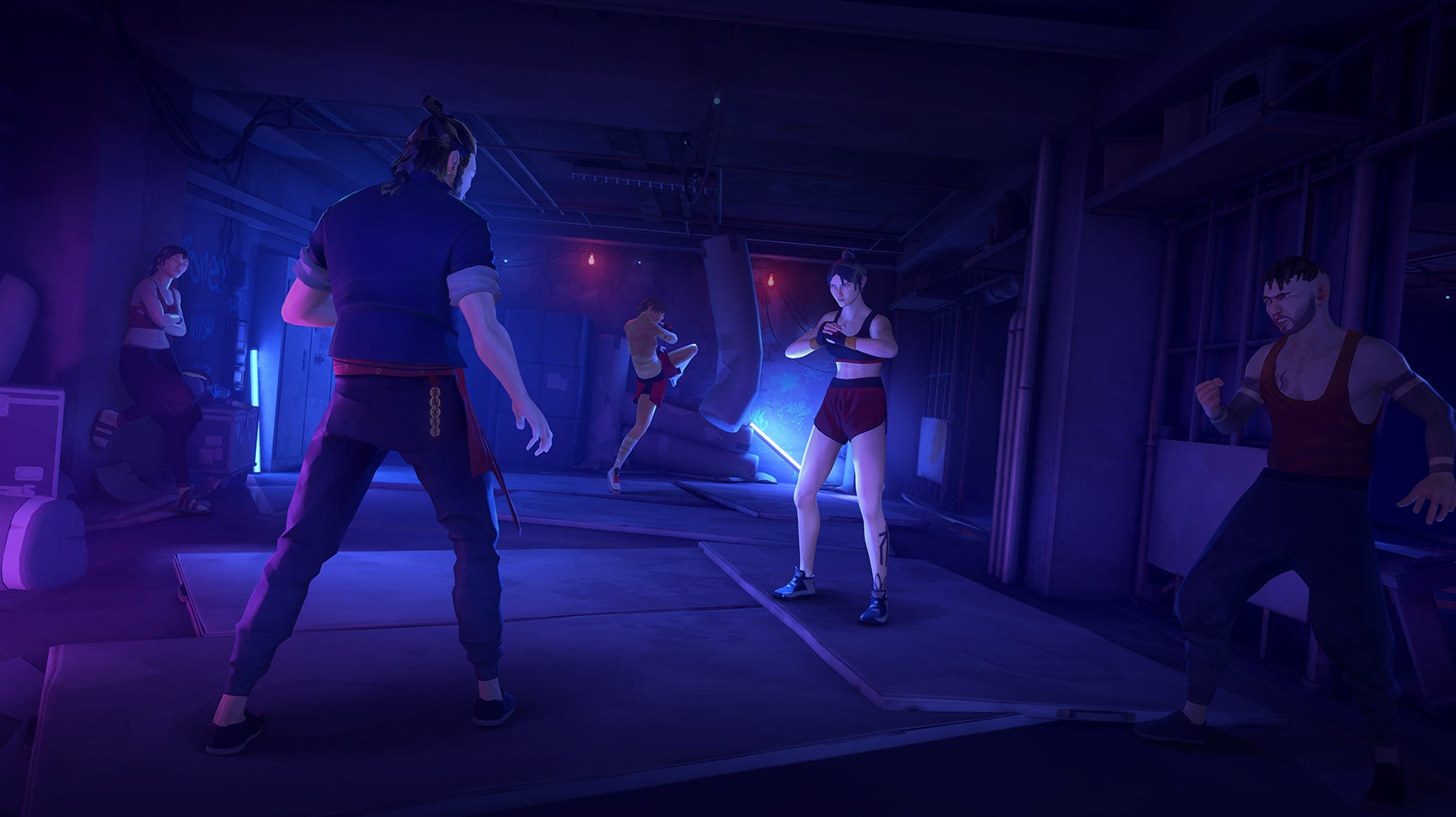 You open the door and immediately throw an empty bottle at a goon SMASH before turning your attention to another running around the corner. With a flurry of punches and a final kick BAM BAM POW you send him hurtling to a fighting pit below. More punches THWACK SMACK and the enemies are downed, the screen splashes a sudden scarlet and you move on in your relentless pursuit.

Sifu, out next year on PlayStation and PC, is an incredibly stylish take on kung-fu. Developer Sloclap experimented with hand-to-hand combat with its previous game Absolver, so a kung-fu game seems like a natural progression.

The focus is solely on combat with little story given, at least in the short section of the game for this preview. It takes place in a private members club, all shadows and paper lanterns with splashes of purples and pinks. Beforehand you can explore your Wuguan, accessed between missions, to level up abilities at the (literal) skill tree, practice combos in the training room, and view a board covered in notes and cuttings that hints at a larger web of conspiracy you’ll, presumably, be tasked with unravelling in the full game.

For now it’s a linear path through the club. There are no puzzles to solve, no story objects to collect. Just punch, kick, smash through groups of enemies.

There’s enjoyment in that purity of vision. Sifu harks back to 90s beat ’em ups, hurtling through urban environments, smacking through waves of thugs, using improvised weapons around you. Though set in a contemporary Chinese city, the influence of classic kung-fu cinema in its set up, martial arts and framing is strong and adds a retro feel. It’s familiar, with a modern twist.

Thankfully, combat is satisfying. Alternating between light and heavy attacks, you dance from thug to thug in a flurry of punches and kicks. Positioning is important as it’s easy to get surrounded and overwhelmed by enemies. Dodges need to be carefully directed into clear space, enemies fire back with unblockable moves, and a focus ability allows you to, sparingly, slow time and smack a goon right in the eye.

Once it clicks, it’s easy to feel like a kung-fu master as the dull THUD THUD THUD of hands against cloth create a percussive rhythm accompanying the techno soundtrack. After enough attacks the enemy’s stance will be broken, allowing for a stylish finisher that’s framed cinematically for that extra flourish. It’s just a shame that the up-close third person camera sometimes struggles to frame the rest of the action and, without a true lock-on, can leave you staring at walls.

A miniboss battle is a real test of your parrying timing, although there’s not quite enough visual feedback on this manoeuvre to make it feel totally satisfying. It’s a battle of repeated patterns that can frustrate compared with the simpler enemies.

The real twist of Sifu, though, is its death mechanic. You begin aged 20, a young martial artist with energy to spare but a lack of power. Due to a magical pendant, each death instantly revives and ages you towards becoming a powerful master. Die once and you’ll age one year; die twice and you’ll age a further two years; and so on. It’s possible to reset the death counter at shrines and by defeating specific enemies, but eventually you’ll die permanently and be forced to restart the current level.

In practice, this is just a clever twist on the old coin-op continue system. Chuck in another coin and have another go, albeit with a character who’s visibly aged and has reduced health in exchange for extra punching power. It’s a fun twist on difficulty – the game won’t have difficulty settings when it releases – though in the final game each chapter resets your death counter but not your age. And with no way to turn back the clock, those looking for an extra challenge can certainly attempt to finish the game without dying.

This preview build wasn’t quite long enough to push the boundaries of the mechanic, and many upgrades were locked out – gathered points and experience can be spent on new moves and abilities adding further depth to combat. But there are certainly some intriguing ideas here, plus a beautifully stylised aesthetic that could well elevate this tightly-focused combat game into something special.