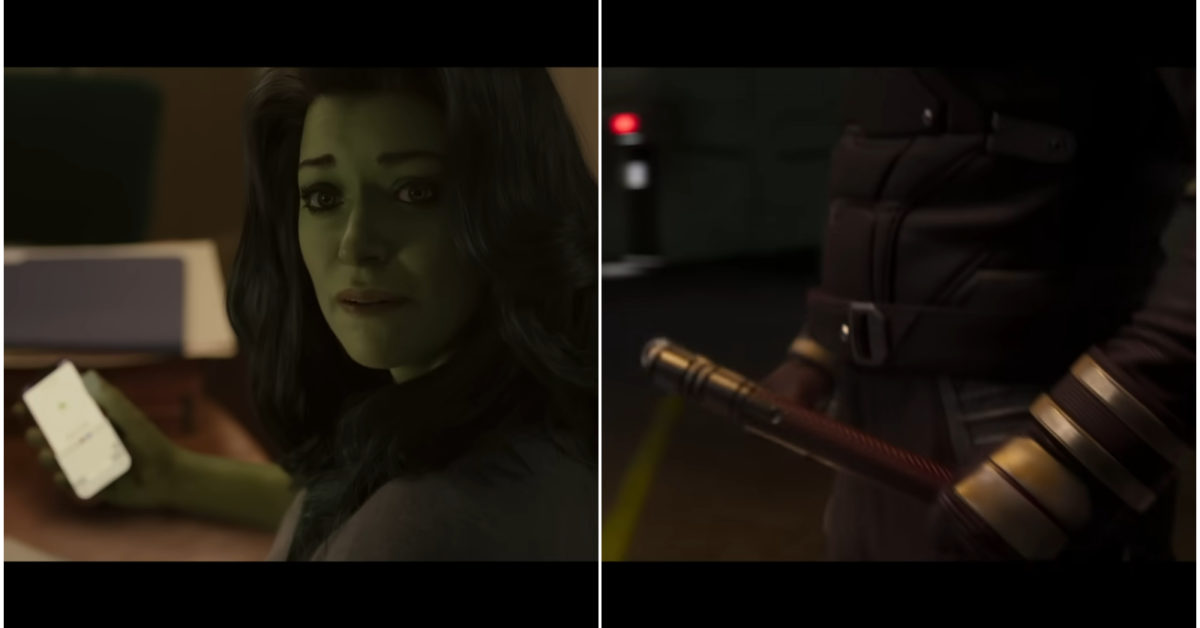 By now, you’ve seen the trailer or you’ve seen it on social media. Charlie Cox‘s Matt Murdock/Daredevil is part of the cast of Marvel Studios & Disney+’s Tatiana Maslany-starring She-Hulk: Attorney at Law. And one person who couldn’t be more thrilled is director/executive producer Kat Coiro, especially now that the news is officially out. “Can I tell you how excited I was when the audience was able to see that and I realized that I did not have to keep that secret anymore? [laughing]” Coiro revealed during a recent interview with EW. “Yes, Daredevil is in the show. I mean, how can you have a legal comedy and not have Daredevil come into it?” An excellent point that begs the question. So how do Murdock and his crime-fighting alter-ego factor into the series?

Though in typical Marvel Studios fashion, the spoiler alerts are everywhere, so there’s not much Coiro could offer when it comes to hard specifics regarding how Jennifer (Maslany) and Murdock meet or how many episodes that “The Man Without Fear” will be appearing in. But as two legal eagles who moonlight as heroes, there is a dynamic that Murdock and Walters will share. “They match each other’s wits, is what I can say. I am definitely excited for Daredevil to make his appearance because I think he’s going to be a crowd favorite. But I can’t tell you anything else about that. The Marvel police is a real thing, and I don’t want to get arrested by them,” Coiro shared. Now here’s a look at what’s ahead Marvel Studios & Disney+’s Tatiana Maslany-starring She-Hulk: Attorney at Law:

Now here’s a look back at the two official trailers previously released along with a series overview, with Disney+’s She-Hulk: Attorney at Law premiering on August 17th:

“She-Hulk: Attorney at Law” follows Jennifer Walters as she navigates the complicated life of a single, 30-something attorney who also happens to be a green 6-foot-7-inch superpowered hulk.

In a recent interview with Collider, Emmy-winning head writer Jessica Gao (Rick and Morty) explained how pleasantly surprised they were by just how much of Cox’s Murdock/Daredevil they could use. “I don’t think we ever, in a million years, thought that we would be allowed to use them, because we didn’t know what the status was of the character. And then, I can’t remember how, we got wind that he was coming back and that it was Charlie Cox, and we were like, ‘Wait, does that I mean we can use him? Are we allowed?’ And when they told us yeah, I mean, we couldn’t believe it, we thought we were being pranked,” Gao explained. “We just kept writing him in, and we kept rolling with the story just thinking like, ‘Okay, any moment now they’re going to tell us we can’t use them. They made a mistake. They actually don’t have the rights.’ But it just kept [becoming] more and more real. And it was so hard to keep that secret!”

It was understandable why Gao would find it hard to believe that the series could use Cox as much as they did. Marvel Studios like to keep strict control over which characters get used and where, always keeping in mind the “bigger picture” of the MCU. “Because everything in the MCU is so interconnected, you just had to know that everything you want to do, there are borders to it, and you have to figure out what the borders are before you can really make any hard decisions,” Gao revealed. “So, you know, sometimes we’d come up with like an idea or a character we wanted to use, but you have to kind of stop and ask to make sure that it wasn’t already been used, or there wasn’t already another plan. And half the time that happened, and you kind of had to scrap everything and start over.”

The Internet Is In Loaf With Fidough, Pokémon Scarlet & Violet’s Bread-Dog