I often decry that racing games are homogenized these days. The genre is dominated by racing sims like your Forzas, Grids, and Dirts. Arcade racers like San Francisco Rush and Beetle Adventure Racing have practically disappeared, and even newer bashers like MotorStorm have been brushed into the dustbin. You still get some titles like Wreckfest that dare to bend the rules, but I miss the rampant creativity of the early-3D era.

Cruis’n Blast is wholeheartedly a callback to that period in racing games. It’s a ridiculous, inventive little drive through insanity. Most importantly, it’s technically a port of a 2017 arcade game, which only cements the feel.

The Cruis’n series has been dormant since Cruis’n Exotica in 1999. Technically. That’s if you discount Cruis’n Velocity on GBA or Cruis’n on Wii. Of course, Cruis’n was a port of The Fast and the Furious game, but that was headed by Cruis’n lead, Eugene Jarvis. That whole series was pretty much a licensed follow-up to the Cruis’n games, and there were four entries. But okay. If we’re trying to make the timeline neat and tidy, Cruis’n Blast is the fourth arcade Cruis’n title. It also has about as much relation to the original trilogy as The Fast and the Furious Games; that is to say, less than you’d expect, but more than you’d think.

The series started in 1994 with Cruis’n USA in arcades, supposedly running on Nintendo Ultra 64 hardware (it wasn’t). It was a race across continental America, and had more in common with raster racers of the previous generation than of the up-and-coming polygonal 3D racers. You drove along winding roads until you hit the finish line, and there was no turning around.

It was followed by two games that got weirder, but didn’t change the core gameplay. Next to games like Stunt Racer 64 and San Francisco Rush 2049, 1999’s Cruis’n Exotica felt behind the times. Still, they all had a certain arcade charm to them, a sort of tackiness, that makes them interesting to revisit today.

Flash forward to 2017, and Cruis’n Blast preserves the gameplay of the original early-3D titles, but cranks up the tackiness. The colors are obnoxiously bright and reflective surfaces are everywhere. It’s a constant assault on the eyes that grabs your attention.

The Switch port is a major upgrade from the arcade original. A number of tracks were added along with a tonne of unlockable cars and upgrades.

There is a caveat to all these tracks and cars, however. The tracks are based on a handful of locations, and because of that, it feels like there are fewer than there are. Many of them feel almost identical, but with slightly different set dressing. For example, an early version of Hong Kong has a lightning bolt bursting a dam. In a later version, a flying saucer knocks a car into the dam. Both break the exact same and don’t affect the race at all. It’s neat and all, but also can feel slightly cheap.

The cars also quickly become weird. The main selection of vehicles are licensed, but they soon become more bizarre things like an attack helicopter, a shark, or a unicorn. This leads to two scenarios: either you balk at the outlandish vehicles and stick to the actual cars, or you pick the triceratops because why would you drive a car when you could be a triceratops? 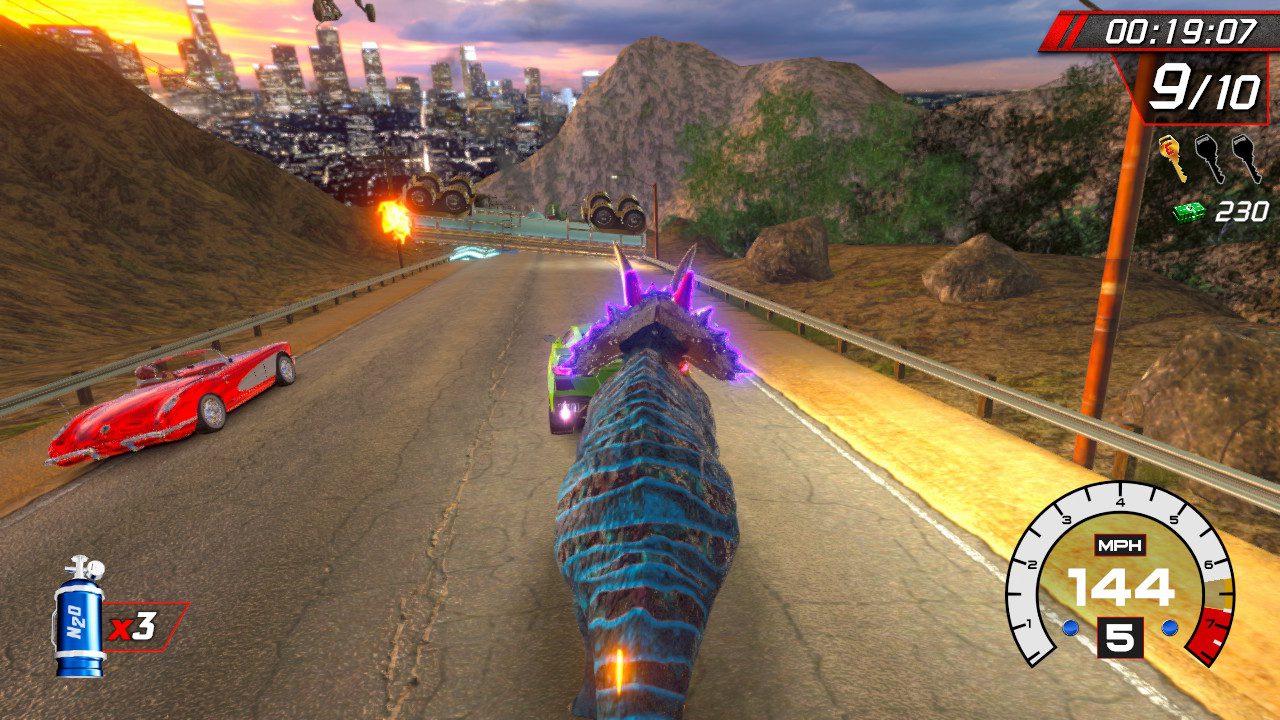 It’s not that Cruis’n Blast has any pretense of being a serious racing game. Even at first glance, the colors are eye-assaultingly garish. The first upgrade you pick up for every vehicle is neon lights, and it just gets more absurd from there until you’re driving a fire-spewing, neon monstrosity. Once again, you can turn it off and just drive a normal car, but part of the game’s identity is lodged in its absurdity.

Don’t think I’m complaining, either. The game’s personality is outstanding. It’s more of a roller coaster than a racing game. The turns are never very sharp, the tracks are not complex, and all the explosions happening around you don’t amount to anything. It’s a constant visual barrage while you try to hit the boost pads, pull off stunts, bash other cars, and drift around turns. It’s an ancient brand of racing, playing so close to the early-3D era. 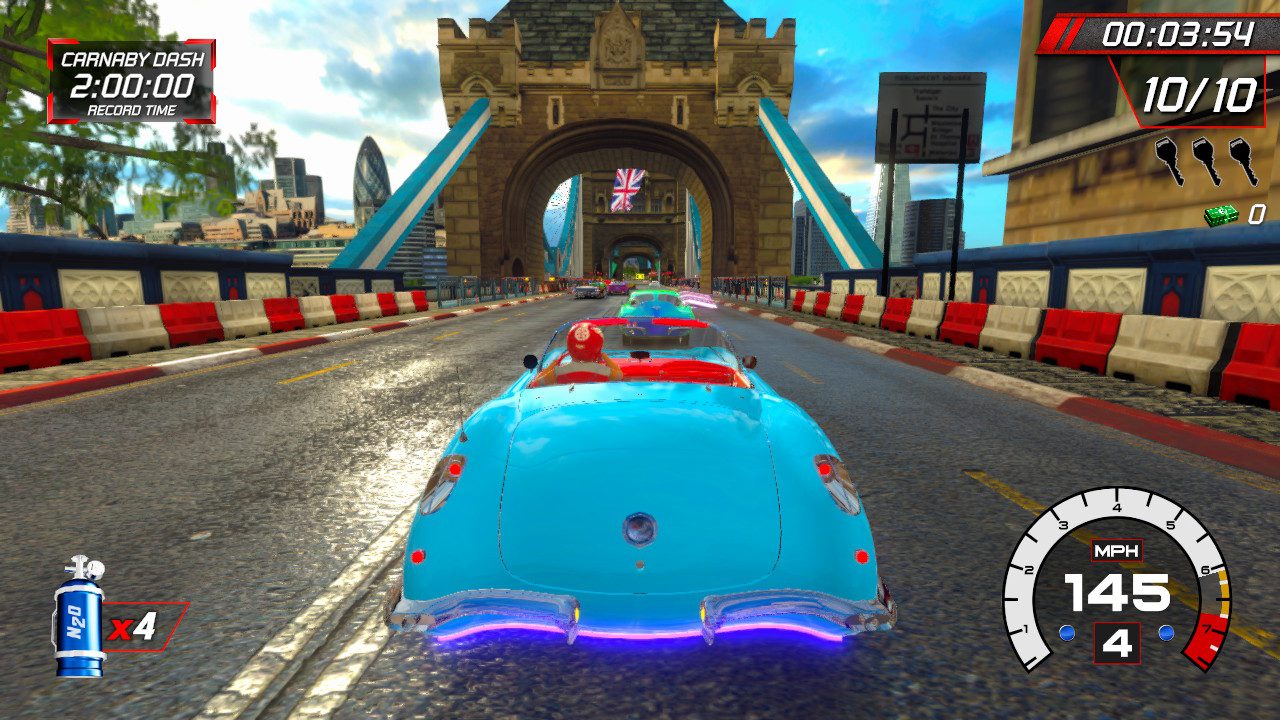 That’s exactly where the sticking point might be for some people. As much as Cruis’n Blast is a sensory treat, the actual racing part of it is otherwise shallow. The other drivers serve more as obstacles than competitors. You have to claw your way up from the back of the pack, and I often found that safe driving in the beginning and all-out war at the end generally got me to the front before the checkered flag.

Which isn’t necessarily a bad thing. The main question I need to ask is, do you miss the early-3D days of racing games? The weirdness, the innovation, the secret cars? You unlock cars in Cruis’n Blast by collecting keys on the course, just like in San Francisco Rush. It’s like the ‘90s never ended.

I absolutely do miss those days. I can’t get on with realistic racing games, so I crave a steady diet of the stuff that Cruis’n Blast gives. At the same time, I normally rented racing games on the N64 and rarely bought them. The same would have held true for Cruis’n Blast. It’s too fleeting to really grab hold of my grey matter and make a home there. I had a lot of fun while it lasted, but now it’s time to return to the beige, carefully curated modernity.

Pokemon GO could be the best game in the metaverse