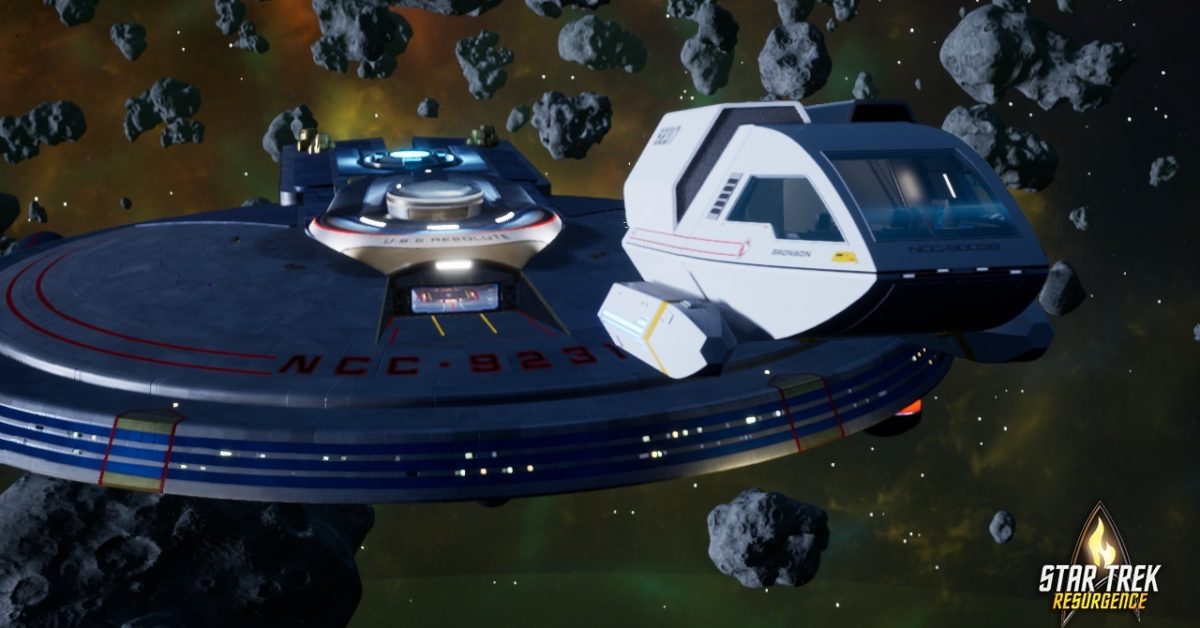 While we were at Summer Game Fest Play Days, we got a chance to sit down with Dramatic Labs and try out Star Trek: Resurgence! Ever since the game was announced during The Game Awards 2021, we’ve been intrigued to see what they have planned for the story as it takes place at a very specific point in time within the Star Trek universe. If you’re not familiar with Dramatic Labs, the company is made up of a number of former Telltale Games employees, who have applied the same type of narrative storytelling and choice-based decision mechanics to the game. So you help navigate where the story takes you based on various choices that could end well or go disastrously wrong.

The story itself takes place in 2380, which sits two years after the USS Voyager returned to Earth, and just seven years before Ambassador Spock goes back in time to the J.J. Abrams‘ version of Star Trek to create the Kelvin Timeline. We find ourselves taking on the role of various crewmembers aboard the USS Resolute, ranging from ensigns who just came on board all the way to being a commander in the middle of negotiations. I really enjoyed the change-up in what I was exposed to so that, instead of running through a singular character and telling only their story, I’m getting multiple viewpoints and attitudes toward what is happening from characters with very different opinions on what The Federation is and how it has impacted their lives. It feels like an episode of any Star Trek made after Season 3 of The Next Generation, in that I have multiple threads being woven at the same time to make a bigger tapestry.

As far as the gameplay we got to try, there were three specific beats to the story. The first was from Petty Officer Carter Diaz, an engineer who serves as one of the enlisted members of Starfleet, where we got to see her interacting with the crew and the Chief Engineer as she learns the ropes. The other two points were from Commander Jara Rydek, who in this story is a half-Koblaid. The biggest chunk of the demo came from a negotiation meeting with two alien races in which the Federation is playing diplomat, with the Commander being part of the delegation along with Captain Zachary Solano and Ambassador Spock.

Part of the story talks about how the Koblaid were taken advantage of by the Cardassians much like how the Hotari (the race you meet with) were being subjugated by the Alydians, who claim ownership of the planet until a rebellion forced them to ask for help. I asked the developer/writer at the session why they didn’t just go with a Bajoran since they were already established. I was told it was a chance to bring in a new race of aliens to help show off a more dynamic feeling of how big space was, who there are other species who are oppressed in the galaxy and to tell a new kind of story that wasn’t already locked into Star Trek lore.

I really enjoyed playing Star Trek: Resurgence and was immediately depressed when this demo was over. A lot of the beats in this game hit very close to home when it comes to narrative design and bringing this specific lore to life. I’m excited to see what they do with the game and how they’re able to create some new Star Trek memories for gamers. There’s still no official release date for this game, as of the date we’re writing this piece. At this point, unless the devs pop off with a major announcement by August, we’re going to assume this game won’t see the light of day until 2023.

Wreckreation Looks Like Burnout Paradise Smashed Together With Trackmania