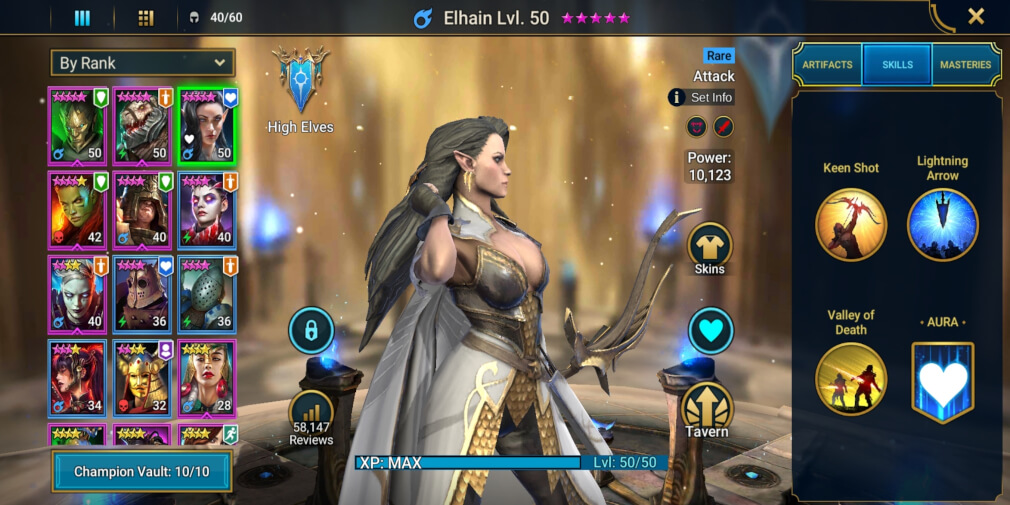 Right off the bad, we need to stress that there are no ‘wrong’ choices here, and each of the starting champions in RAID Shadow Legends has their own skills which will turn out useful in different situations and teams. Galek might be the champion with the best average rating for each game mode (chosen by the players) in 2022, but as we have already stated – don’t worry if you like any other characters, you can’t make a huge mistake. After all, it’s the later choices that will have more impact on the game. All that aside, you can take a look at our favourite starting champion below.

RAID Shadow Legends is a unique, turn-based mobile game where you battle fearsome enemies with three other heroes. From small foes to large bosses, it throws a little bit of everything at you during your combat-filled adventures.

You will traverse beautiful lands as you form your squad and train them. This will, of course, make things a little easier on your journey to defeating many baddies. You can collect many warriors, all from 14 different factions. The number of warriors? How about a whopping 650+? Yeah, so there’s never going to be a dull moment when it comes to RAID: Shadow Legends’ characters.

When firing up the game, you’ll first complete a short tutorial explaining the basics of the combat system while also going through small bits of dialogue. After that, you’ll be able to decide who you’re starting champion is and that’s what we’re briefly going to talk about today. So, if you decided to close the game at that point because you weren’t sure then don’t worry, we’ll help you get an idea. Just remember, at the end of the day, the choice is yours.

So, you’re wondering which Champion you should start off with in RAID Shadow Legends, right? Well, you’ve come to the right place so feel free to fire the game back up when you’re ready, it’s safe, friend. But at the start, you’ll be able to choose between four different champions.

They are; Elhain of the High Elves who is an archer. We now go over to Kael of the Dark Elves faction who is a mage. In the next corner, we say hello to Galek of the Orcs who is a warrior with brute strength. And last but not least, we say greetings to Athel who represents the Sacred Order faction and is a knight.

Each of these skilled champions provides great benefits but to start out, Athel of the Sacred Order is a great choice. This is because of her attributes. Of all four heroes, she has the most balanced attributes, including boasting the highest defense of the group (204). She also has the second-highest HP (2,805). A combination of these two things helps a lot.

Her attack power is the lowest but it’s still a solid 216. She is also the second-fastest character as well to go along with a Skill that gives her offensive and defensive buffs while another one has her dish out a punishing three-hit combo. All in all, Athel is a very balanced warrior that can certainly help you out early on.

If you want more health or attack power, then Elhain is a great choice. She boasts the highest HP (2,955), and the highest speed (107) and she’s tied with Kael for the most attack power (229). The only main flaw with Elhain is that her defense is only 182 so just keep that in mind as well. As we mentioned; the choice is yours, as there are really no wrong choices when you’re picking the starting champion, so we recommend going with the one whose faction you prefer most.

13 Tips For Playing As A Killer

5 Letter Words Starting With V and Ending With H

Pokemon GO Alola To Alola Special Research How To Get