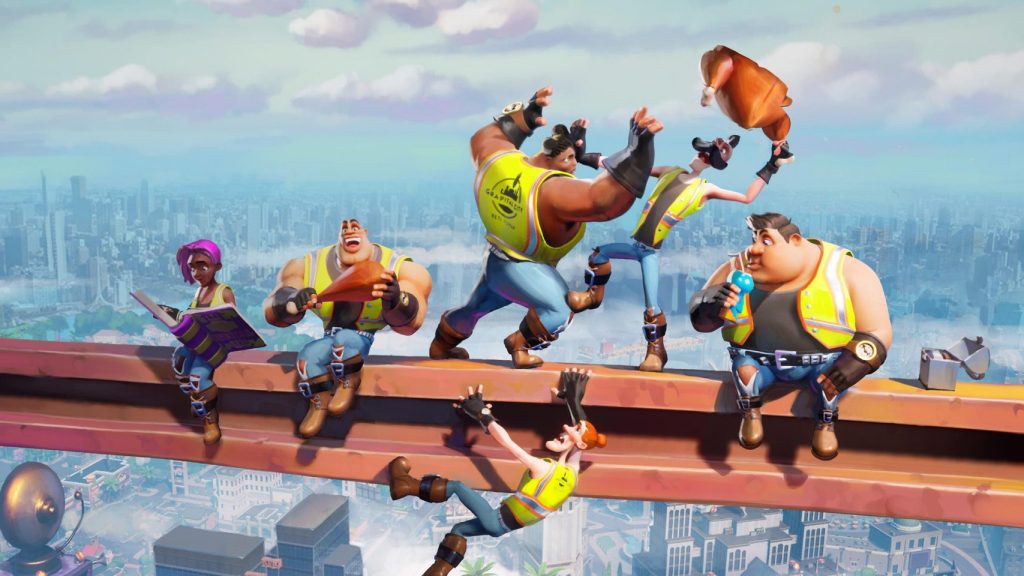 Rumbleverse is a battle royale, where 40 players brawl it out to see who’s the strongest in Grapital City. Unlike Fortnite or other arena-style games, however, there are no guns or grenades. The only way to win is to flex your muscles and body slam your opponents — often off of tall buildings. To dive deep into Rumbleverse, we had the immense pleasure of sitting down with Iron Galaxy Studios Co-CEO Adam Boyes.

This interview has been condensed and edited for clarity.

What were some of the inspirations you took to bring Rumbleverse to life?

Adam Boyes: Being a battle royale, there are many different inspirations that we drew from, a lot of games we grew up playing, and stuff like that. Lots of nods and winks. But then there’s other parts of, say, ‘Wouldn’t it be funny if you could get fried chicken from a drive-thru?’

The game itself is a love letter to games in general, not just combat games, not just adventure games, but also sports games. A lot of us worked at Midway, and it’s been fun to watch people see some of those nods.

It feels like the game swaps from a battle royale to a fighting game! I swear I saw a parry at one time. 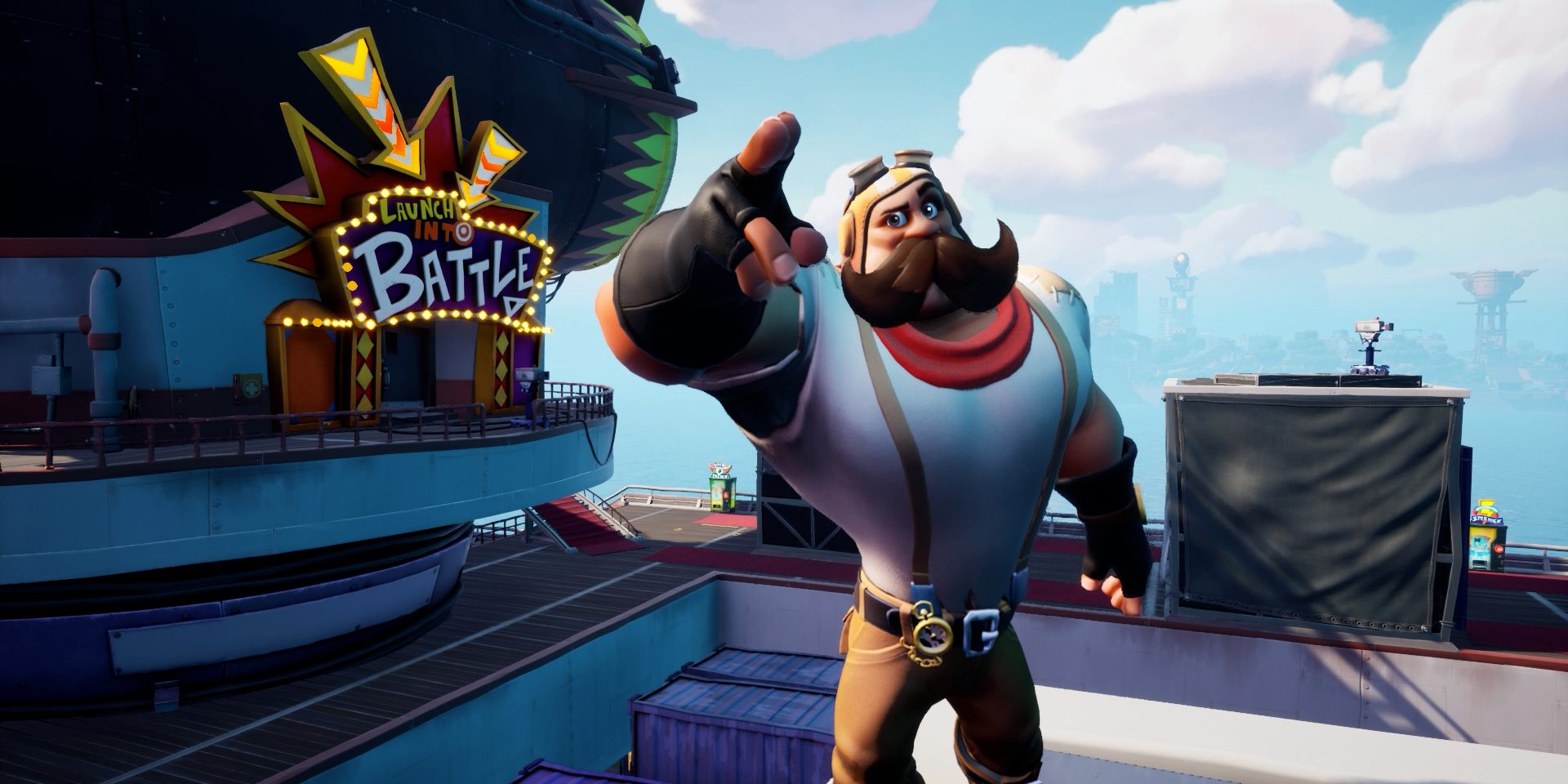 Boyes: There are no parries, but there are different blocks and dodges, including different air dodges as well. We had to design an entire power structure system with priority to make everything work. We couldn’t make a fighting game with 40 players online, obviously, so we had to get inspired and work around it. For example, if we use a move at the same time, someone has to win, right? That’s where the power structure comes in. Each category of attack has a different priority, so that’s what we use to determine who wins in a trade.

Have you drawn inspiration from wrestling as well? You have these big brawlers slamming people around like in a WWE 2K game. 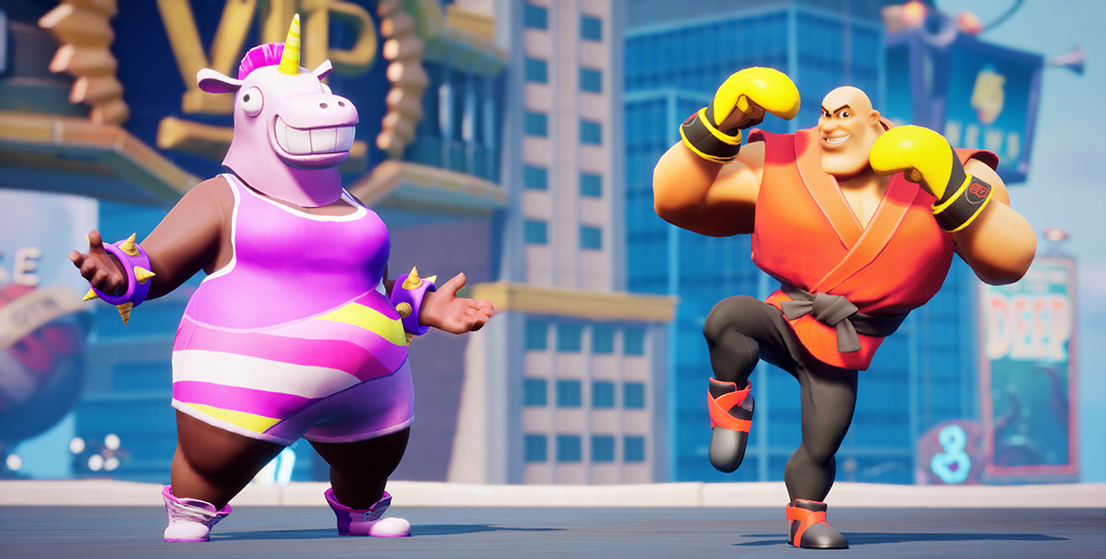 Boyes: It was actually when my co-CEO, Chelsea, was like ‘We should do wrasslin’, and from there the ideas started to flow. We asked ourselves ‘Okay, what is this setting?’ It’s Planet Suplex, and every person is born a champion. So then we got to thinking things like “What would the airport look like? What would the subway be like?”

Everyone just wants to compete, to be the greatest competitor. So we’re not gonna have people driving around in cars, delivering mail. No, they’re gonna be running around, doing press-ups and stuff like that. We even went in on the stat system, you know, with arms, legs, and your core. That was a funny joke in the early days of development, we were like “Wouldn’t it be funny if stats aren’t like endurance, and instead, it were arms and legs? Like, it’s leg day, it’s arm day. 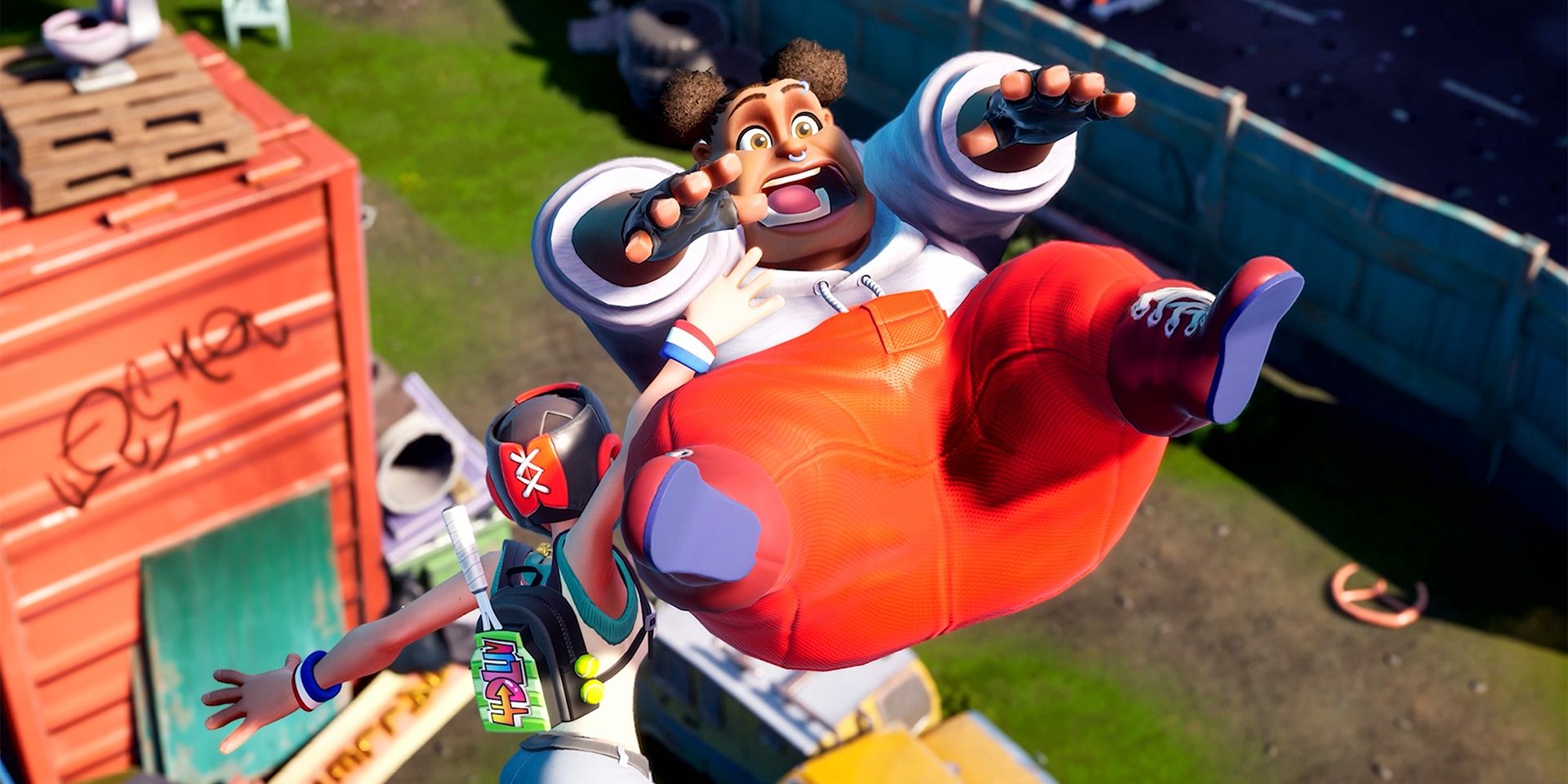 Boyes: Right? So we had to translate that to health and stamina and strength, but that’s sort of what I love about it. When we think back to games like Final Fight, we think a lot about what the other side is thinking, like when you discover a turkey or chicken or a sandwich. We’re like “what a goofy thing.” Well, in our world, chickens gotta be really big, right? Pretty hefty? So if that’s how players are going to get health, it’s gotta be goofy and it just works.

That’s the love letter to companies like Capcom, the things myself and my team members grew up with. We love the goofy stuff, you know, the bigger and dumber it is, the more it fits in our world. We knew we wanted to make everything feel like you’re playing a highlight reel. For example, one of the first things we developed was the chokeslam, because when we came up with the concept, it was like “I want to chokeslam someone off a 40-story building.” So the first thing we did was put in a 20- or 30-story building and a chokeslam move. Then the team put in this VFX of air rippling, a shatter effect, a big decal exploding out of the ground and we knew: that’s it, we’re onto something here.

It’s like you’re watching Dragon Ball Z-style effects. Did you take any lessons from your previous work in fighting games? 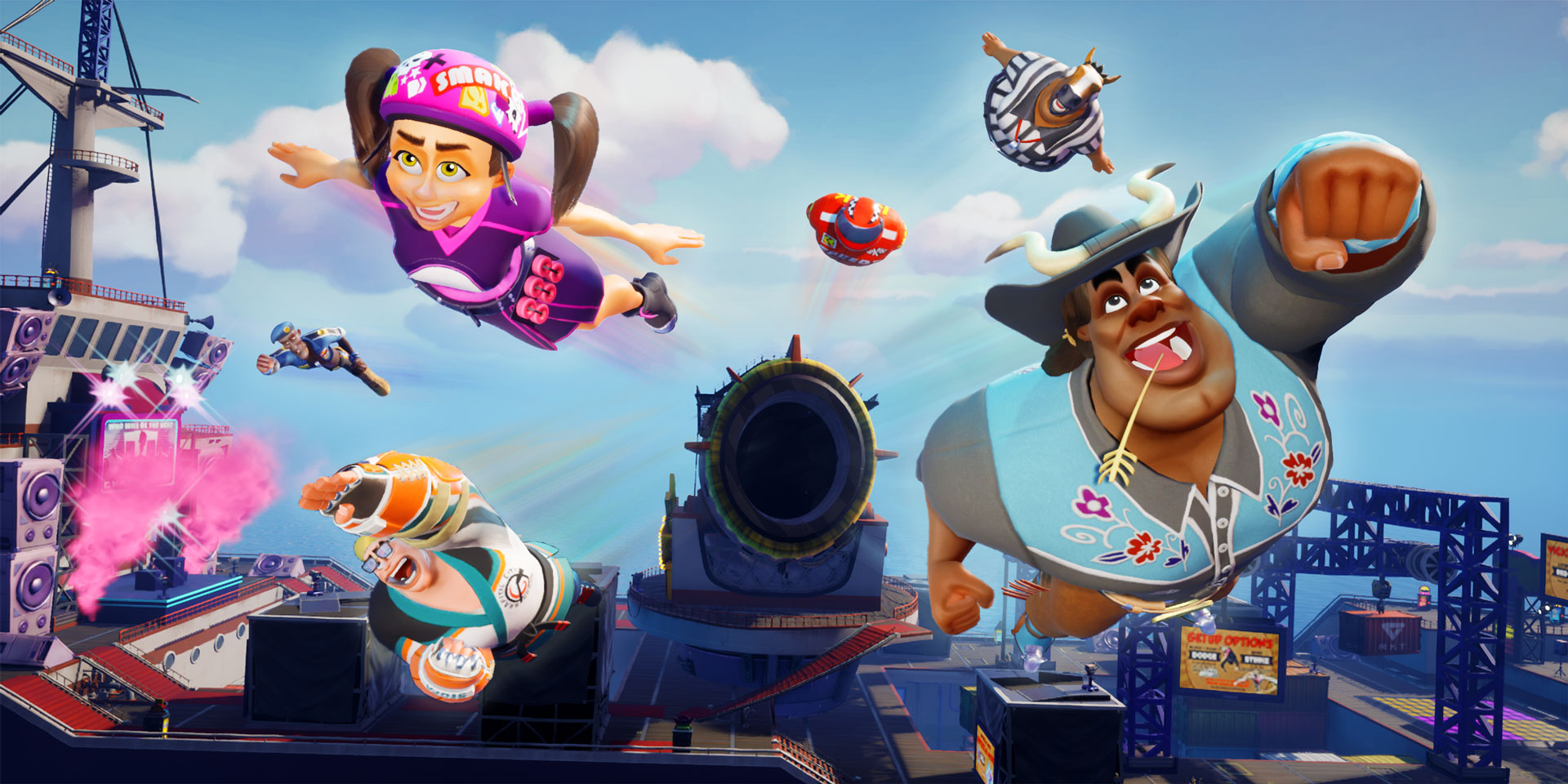 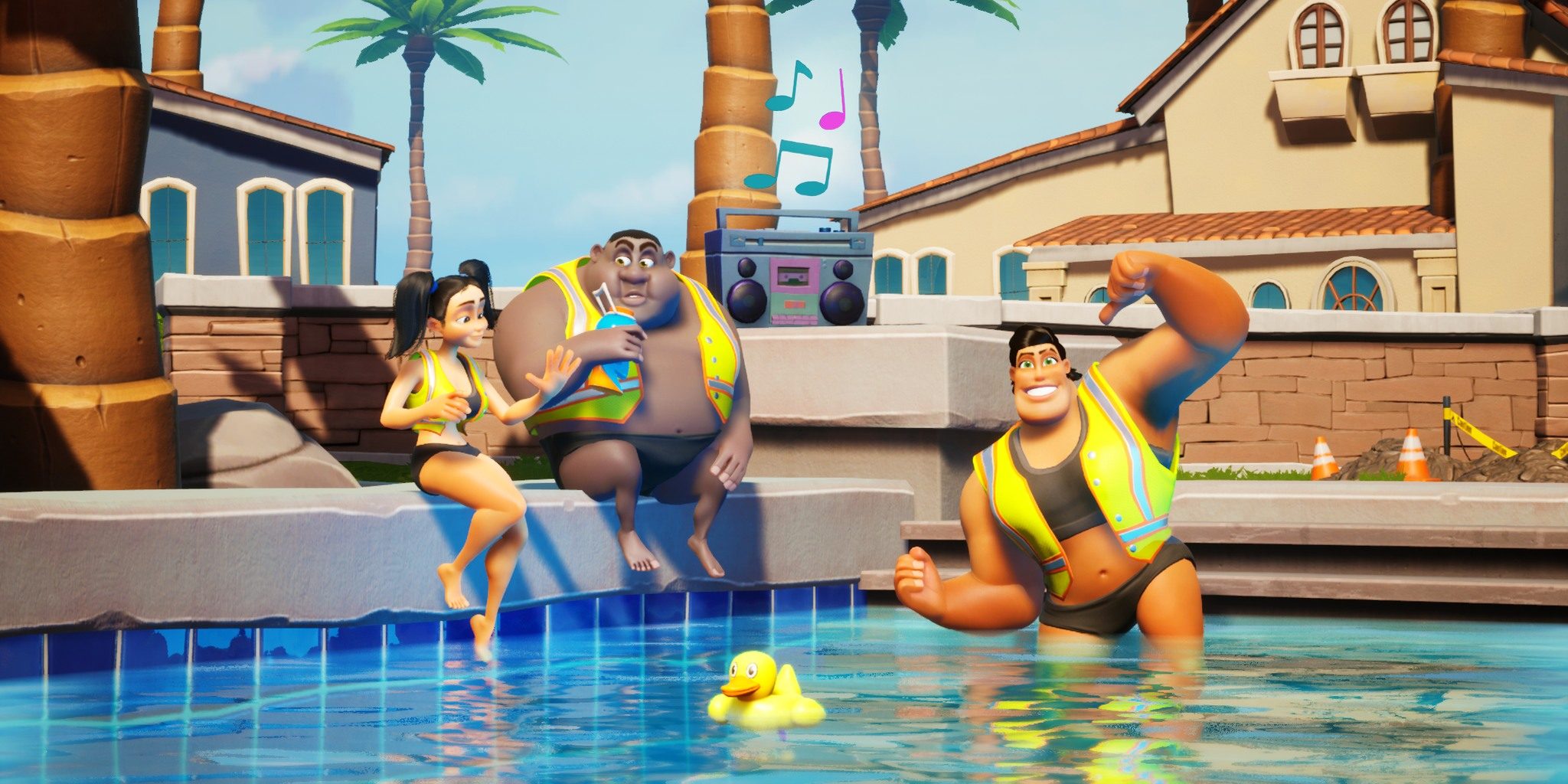 Boyes: I’m the E. Honda spammer, the Blanca ball spammer, that’s all I do, so I’m just absolutely trash. So to me, it was never really about winning. It was about the highlight moments — if I can trick someone and get them with a shocking move, or something bizarre then that’s it. Overwatch actually got this right and inspired us with their Play of the Game system, because it’s like “Who needs KD?” This is all about that one moment in the game.

I gotta say, the way the game makes you feel like you’re part of a highlight reel is incredible, even down to the voice announcer. 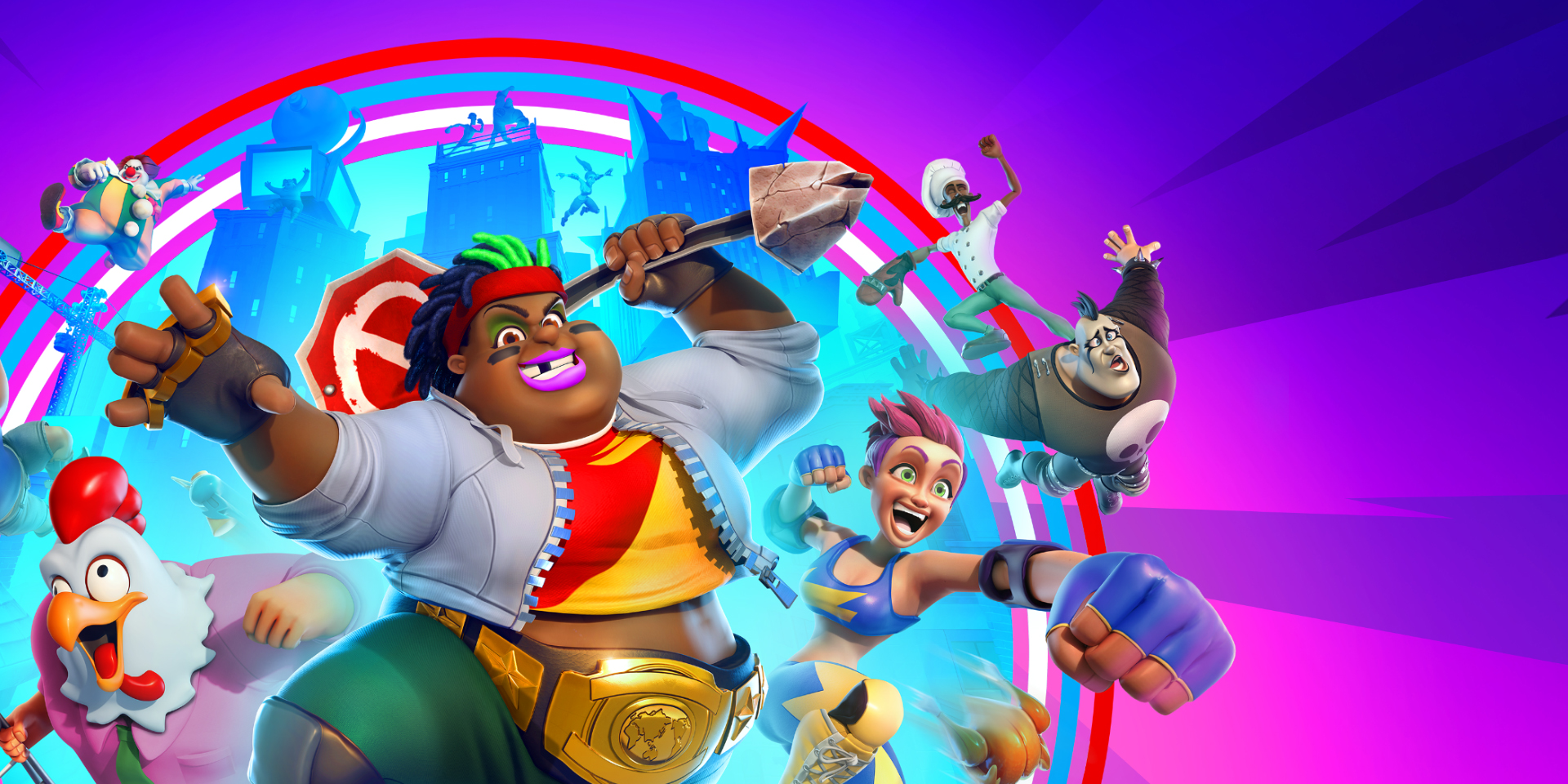 Boyes: That’s Dave Fennoy, a superstar. We tried a lot of people and we have had the announcer archetype already selected, knew what they looked like and everything. Then you get actors coming in and nailing their audition and we’re thinking “No, he’s the one.”

Have you noticed any particular move or move combos that became a little too powerful? 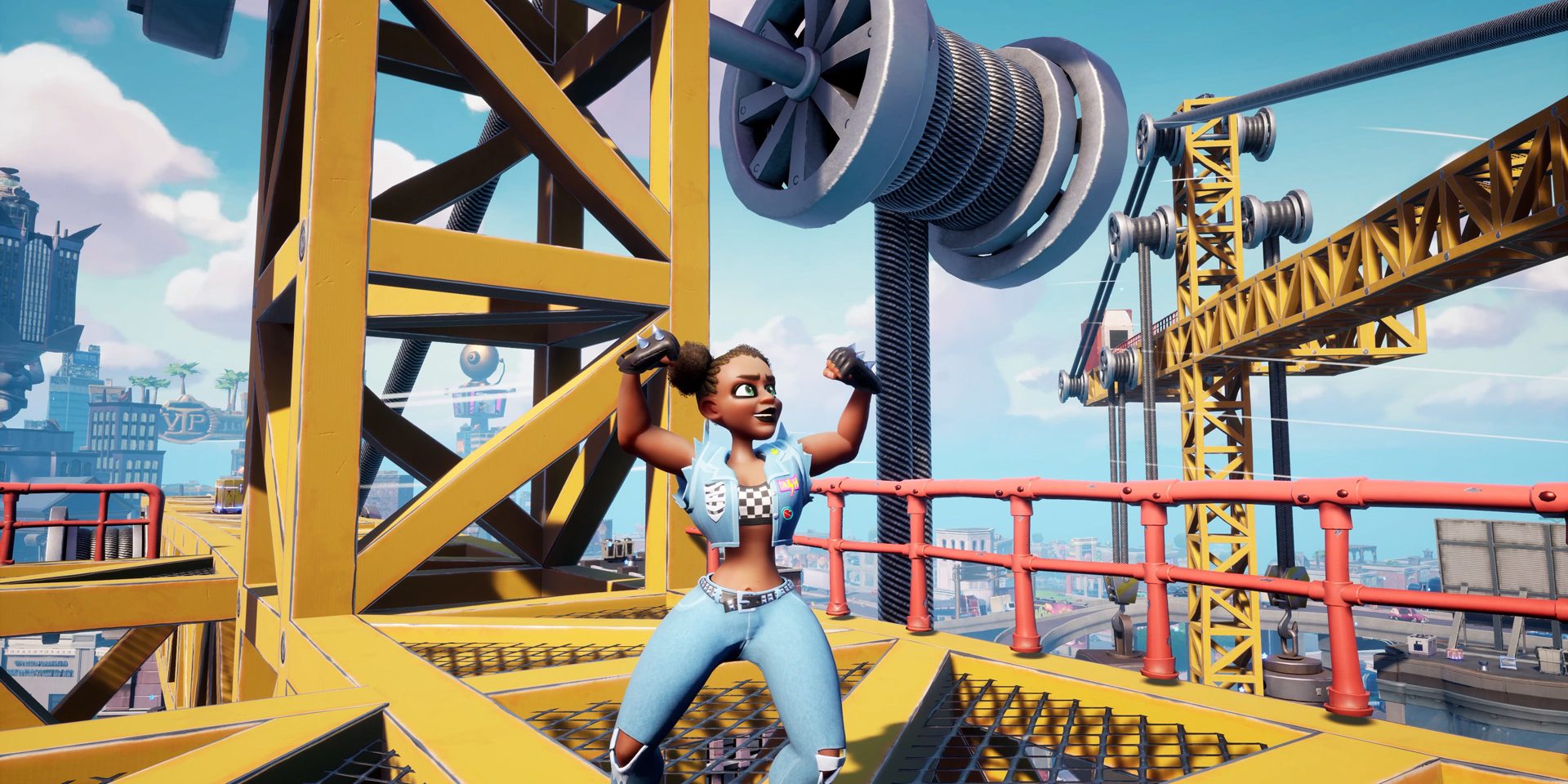 Boyes: Yeah, early in the weekend for sure. So we’re on day six I believe, and right out the gate we noticed a problem. There was this stop sign bug where you could bounce off of it multiple times. So when you came down, you’d do over 1000 damage within a city block’s radius. We ended up calling it the Nuclear Stop Sign bug. People were doing it all over the game, I got eliminated by it like four times. I remember walking past an area once and I saw like nine bodies, and I just knew that the area had been nuked.

How we fixed it was funny too, so we saw a Twitter thread about it, and I was like “I want to try that!” So I did and killed two people. Then I started playing with my friend and he was like “We should just do this all the time.” I was ruining my own game!

We’ve also seen all sorts of crazy combos come out. One of our guys on the team, Derek Enrich, started a combo off with an uppercut, lands a cosmic kick, performs an air dodge and finishes them off with a drop attack. I’m like “how on Earth are you doing this?” That’s what I love about this is that we’re only a weekend in and people are creating combos I’ve never seen before.

You mentioned you have a lot in the pipeline, so I gotta ask, anything you can share? 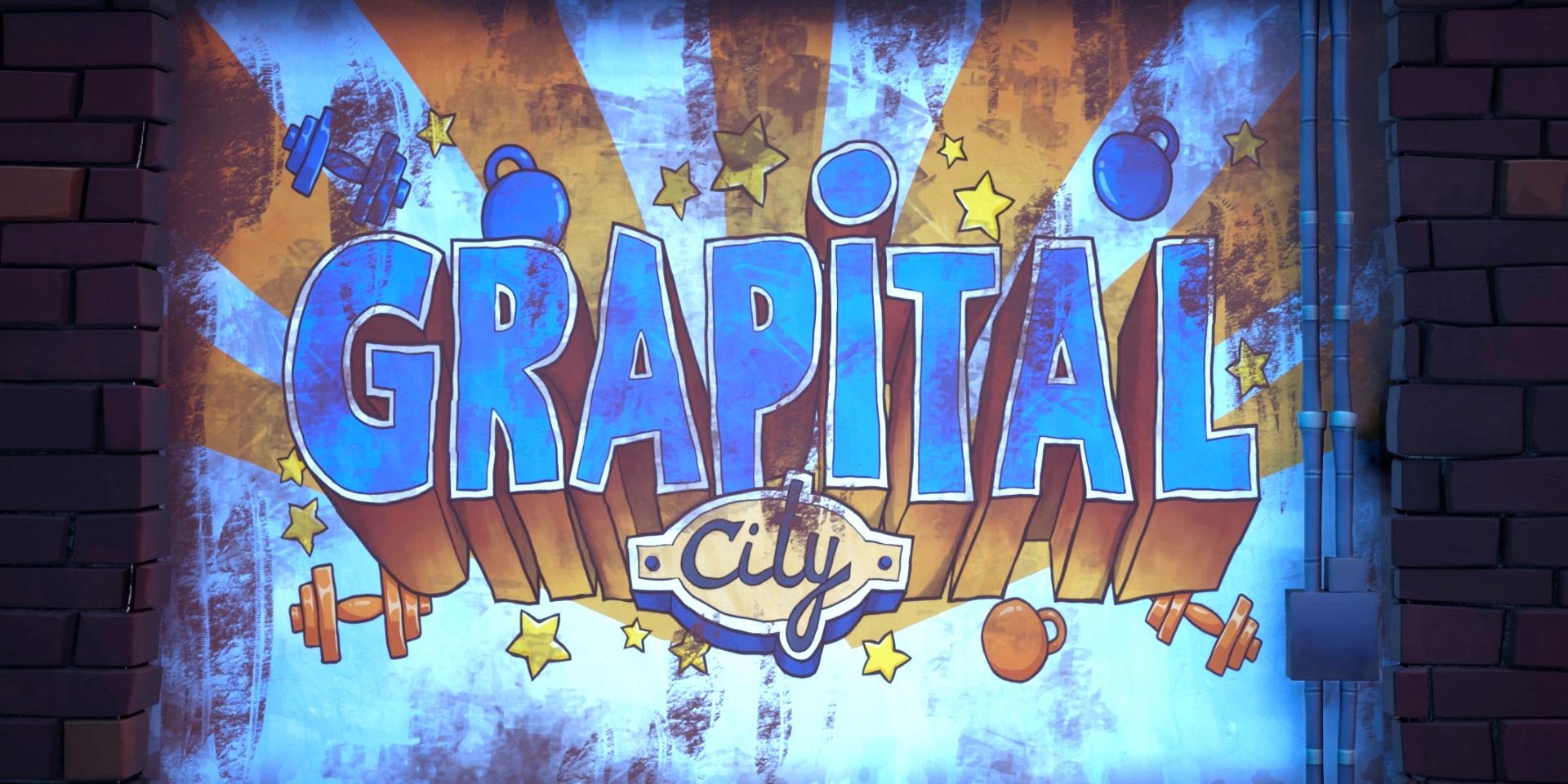 Boyes: I wish. It’s one of those things that we’ve got a list for. We’ve got like 6,000 ideas that are all in a Google Doc, with priorities assigned and everything. We got a Battle Pass dropping soon, a lot of good content in there, and the future is looking bright. The Battle Pass is $1,000 bills, and if you complete it, you get $1,500 bills back. We wanted it to stay free to play and have players feel like they are earning when they play.

Any plans for collaborations with other IPs or media? I can imagine John Cena hanging out in Grapital City. 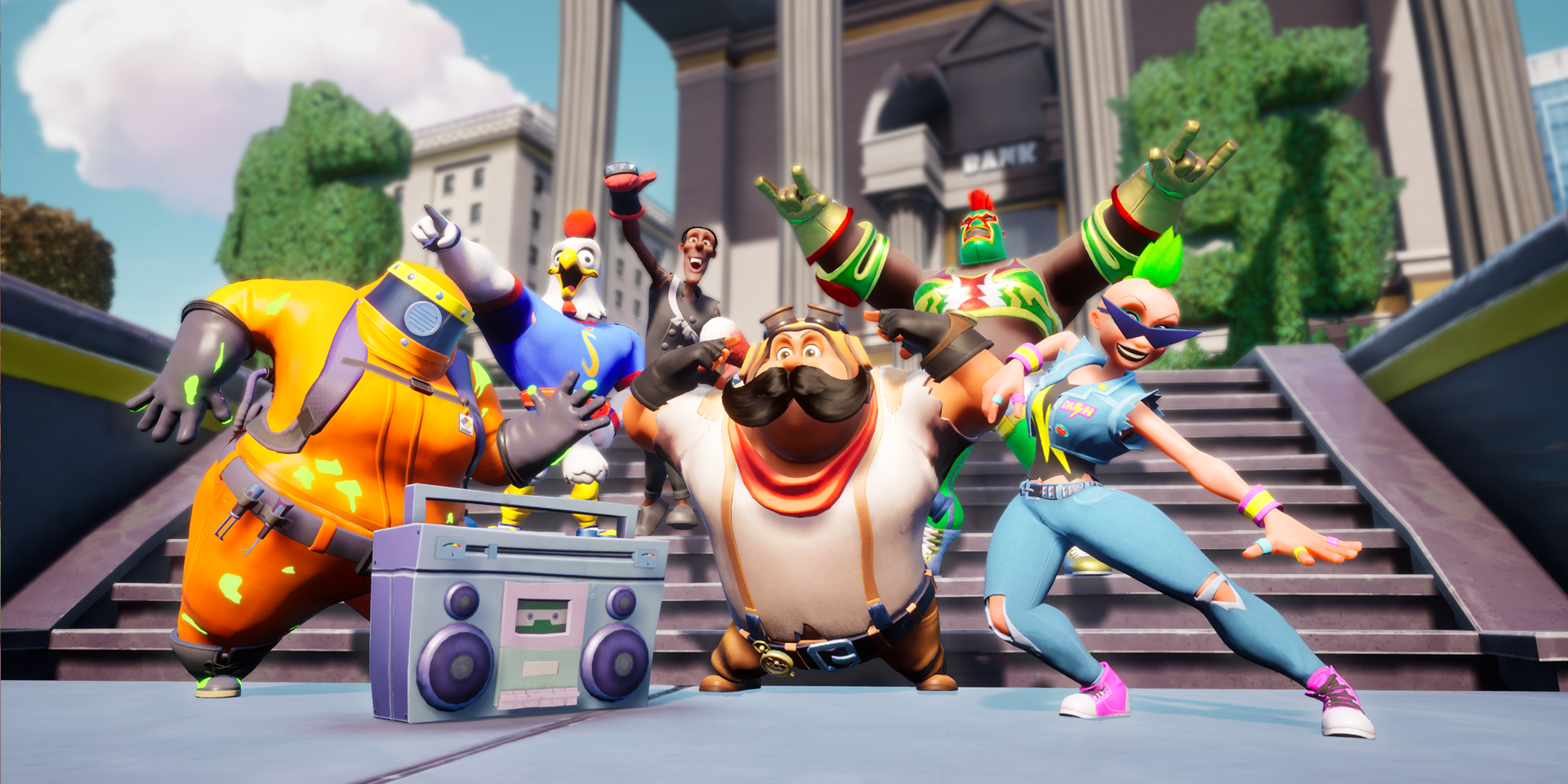 Boyes: *laughs* Yeah well, you can imagine our imagination is very, very high. So many other games have done incredible crossovers, so it’d be goofy for us not to look at that kind of stuff. It’s just a matter of what we want to do first and foremost, which is build something that stood on the merits of its own mechanics. I’m super excited about the future, but that’s further down the road, and we’ve got to focus on the present.

Written by Junior Miyai on behalf of GLHF.

Could Hallmark Bring Back One Of Its Major Cancelled Series?