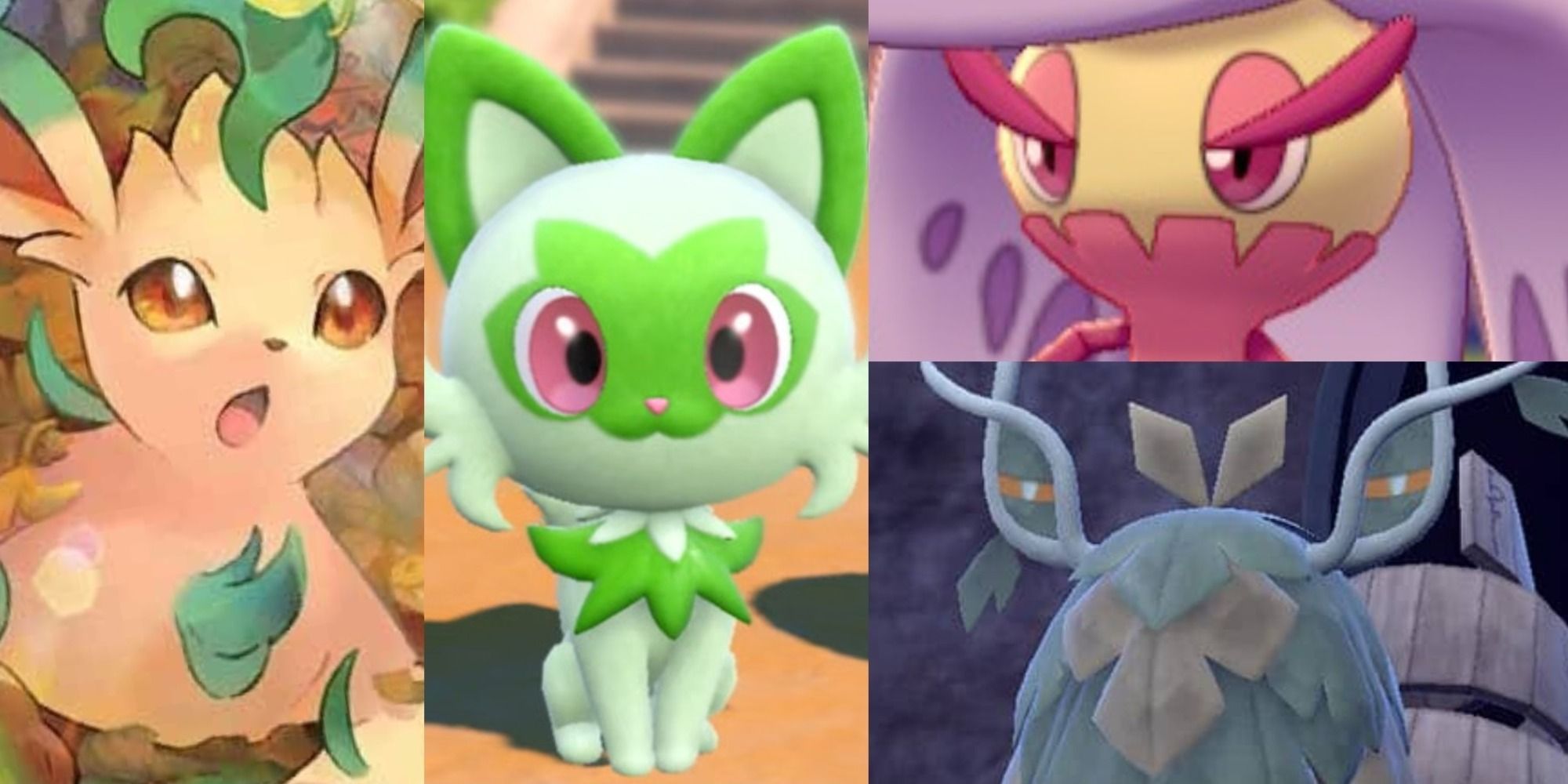 Over 10% of the Pokémon in Scarlet and Violet’s Paldea region are Grass-Types, meaning there is a plethora of options to choose from. Grass is a Super Effective against Water, Ground, and Rock. It’s also good when facing off against Electric-Types since it resists Electric attacks.

It is, however, a bad match-up against Fire, Ice, Poison, Flying, Bug, and Dragon-Types. This list will contain a few of the best Grass-Types out of the 43 options available.

Both are Grass/Dragon split-evolutions of Applin. Their Dragon-Type cancels out Grass’s weakness to Fire at the cost of adding two new weaknesses; Dragon and Fairy. In terms of stats, the biggest difference is Appletun has more HP while Flapple has more Attack.

Applin can become a Flapple by using a Tart Apple on it or become Appletun when a Sweet Apple is used on it. Applin can be caught in West Province Area 3, and both items can be purchased from the Delibird Presents shop after players progress far into the Gym storyline.

Tsareena is a pure Grass-Type. It has an extremely high 120 Attack Base Stat, although most of its other stats vary from below average to slightly above average.

Tsareena doesn’t appear in the wild, but you can find Steenee in East Province Area 1. Make sure it learns the Stomp move at level 29, as that move is necessary for it to evolve. It’s also possible to catch a Bounsweet as early as South Province Area 1. It’ll become Steenee at level 18.

Leafeon is one of Eevee’s eight Evolutions. It’s a pure Grass-Type and Evolves via being given a Leaf Stone. Leaf Stones can be found while roaming around the world and be bought from the Delibird Presents store after the player beats a few Gyms.

Eevee can be found in both South Province Area 2 and West Province Area 3. Leafeon’s Base Stats include 110 Attack, 130 Defense, and 95 Speed. That makes Leafeon’s stats more proficient than Tsareena’s. It is a wonderful Physical Speedster.

Tentacruel’s distant cousin is a Ground/Grass-Type. This type of combination cancels out a lot of weaknesses and gives it immunity to Electric. Toedscruel is an excellent Special Defense tank.

Toedscruel only spawns in the far north-west corner of Pladea, but its pre-evolution Toedscool can be found in many more locations. It’ll evolve at level 30. Toedscruel’s highest Base Stats are its Special Defense at 120 and its Speed at 100.

Arboliva is a Normal/Grass-Type. Normal makes this Pokémon immune to Ghost attacks, but makes it weak to Fighting. Arbovia’s Seed Sower ability can boost Grass damage for five turns when it gets hit by an attack. Its Defense, Special Defense, and Special Attack are all above average.

Arboliva doesn’t spawn naturally, but Smoliv and Dolliv do. Smoliv can be caught very early on at South Province Area 2. It’ll evolve into Dolliv at level 25, then Arboliva at 35.

Brute Bonnet is weak to a few more Types than the default Amoonguss is, but its Base Stat Total rises from 464 to 570. Regular Amoonguss has HP as its best stat, while Brute Bonnet prioritizes Physical Attack.

Rotom is a Ghost/Electric that is capable of trading its Ghost-Type for various other Types by possessing different objects. You can buy a Rotom Catalog from auctions. Upon using the catalog on Rotom you can switch it to its Electric/Grass lawnmower form. Electric cancels Grass’s Flying weakness and adds Steel resistance.

RELATED:Pokémon Scarlet & Violet: How To Get Free Rotom Phone Cases

​​​​​​Rotom has the Levitate ability which makes it immune to Ground-Type attacks. Since Ground is Electric’s only weakness, that makes Mow Rotom being part Electric-Type has no negative impact. Additionally, Mow Rotom’s Defense, Special Defense, and Special Attack are all above 100. If you need help finding Rotom then this guide will help you.

123 HP, 100 Attack, and 97 Special Attack Base Stats result in this goat being the best pure Grass-Type option. Gogoat’s Sapper Sipper ability raises its own Attack stat even further once it gets hit by a Grass move.

Having a self-healing attack like Horn Leach can be very beneficial to this Pokémon. It’s a move that allows Gogoat to HP equal to half the damage it deals. It’s also incredibly easy to catch this Pokémon since it and Skiddo are plentiful around almost the entire region. Skiddo evolves into Gogoat at level 32.

Wo-Chien is a new Grass/Dark optional Legendaries found in the Grasswither Shrine. Access to it can be obtained by finding glowing purple stakes across south Paldea. It has 100 Defense and 135 Special Defense Base Stats, and its only stat below 85 is Speed.

Wo-Chien also has an ability called Tablets of Ruin which decreases the Physical Attack stat of opponents by 25%. This makes it even harder to get past Wo-Chien’s incredible defense.

Like Brute Bonnet and Wo-Chien, Sprigatito’s final Evolution is a Grass/Dark-Type. Sprigatito becomes Floragato at level 18 and then Meowscarada at level 36. Meowscarada has 110 Base Physical Attack and 123 Base Speed, making it capable of taking out many Pokémon before they even get a chance to fight back.

Meowscarada’s signature move Flower Trick ignores accuracy and always lands a critical hit. This means its 70 Power will always multiply to 105. Increasing its strength, even more, is its Overgrow ability which boosts the Power of Grass-Type attacks when the user is below 33% HP.

Has Like a Dragon: Ishin’s Journey to the West on PS5, PS4 Been Worth the Wait?

All Fount of Blessing locations guide