Once Upon A Second Print For Doctor Strange & Star Wars 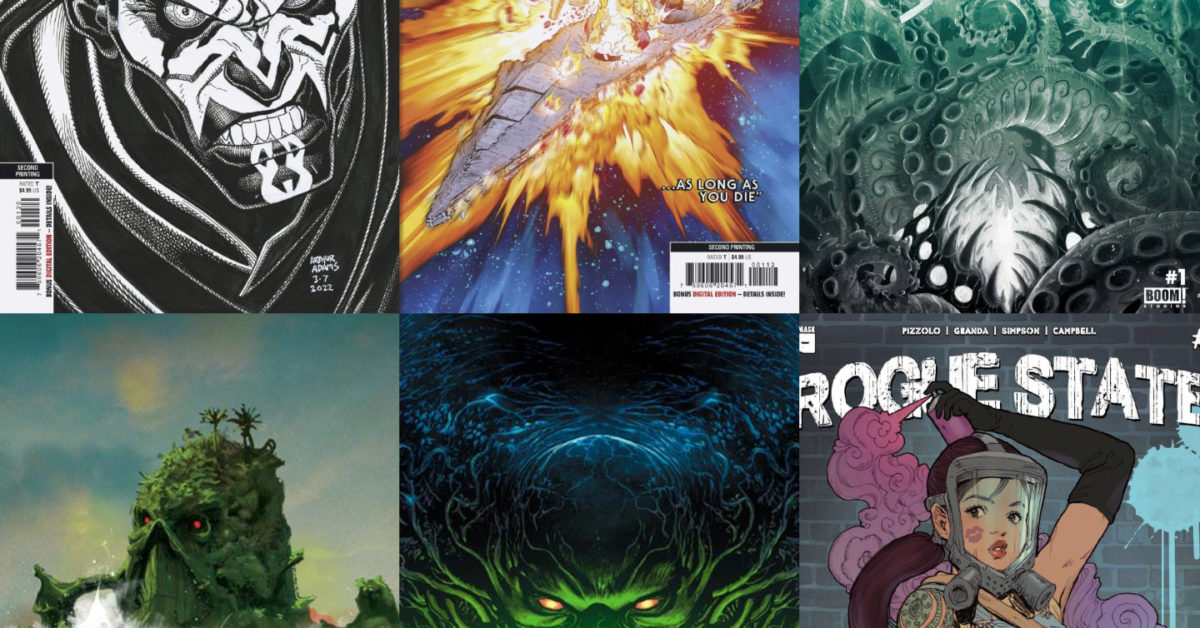 PrintWatch: Marvel Comics is running second printings on Doctor Strange and Star Wars comics as well as the Miracleman Omnibus, Boom Studios for Once Upon A Time At The End Of The World #1. DC Comics has one for Swamp Thing: Green Hell #1 as that series returns to the schedule, and Black Mask does the same for Rogue State #1. And we have the covers to Star Wars: Hidden Empire #1, including a 1:25 ratio variant cover, we talked about last week.

PrintWatch: STAR WARS YODA #1 2ND PTG ARTIST TBD VAR
MARVEL COMICS
SEP228932
(W) Cavan Scott (A) Nico Leon (CA) TBD
ALL-NEW ADVENTURES FOR THE GREATEST JEDI OF ALL TIME! To some, he was a legend. To others, he was a teacher. Now Yoda is all but forgotten, living in exile and haunted by the past. As a strangely familiar voice echoes through the swamps of Dagobah, Yoda must revisit the many lessons he has given over the years, from the days of the High Republic to the chaos of the Clone Wars. In the first of three story arcs, a desperate cry for help reaches the Jedi Council on Coruscant and only Yoda can respond. But how far will he go to protect a community from attack? RATED T In Shops: Jan 18, 2023 Final Orders Due: Dec 04, 2022 SRP: $4.99

PrintWatch: STAR WARS REVELATIONS #1 2ND PTG ARTIST TBD VAR
MARVEL COMICS
SEP228931
(W) Marc Guggenheim (A) Salvador Larroca, Various (CA) TBD
THE CAN’T-MISS STAR WARS ISSUE OF THE YEAR! After WAR OF THE BOUNTY HUNTERS came CRIMSON REIGN… now in the midst of HIDDEN EMPIRE, Qi’ra has shaken the galactic landscape to its core!…But what lies beyond for the Rebellion? For the Empire? What role do the bounty hunters play? And what is happening to Doctor Aphra? Witness the next step in the legacy of heroes and scoundrels in the galaxy far, far away as MARC GUGGENHEIM (HAN SOLO & CHEWBACCA) is joined by a ragtag team of artists to bring you an explosive tale you won’t soon forget! The path to the future of STAR WARS starts here! RATED T In Shops: Jan 18, 2023 Final Orders Due: Dec 04, 2022 SRP: $5.99

PrintWatch:  MIRACLEMAN OMNIBUS HC DAVIS VAR
MARVEL COMICS
MAR221116
(W) Mick Anglo, Various (A) Garry Leach, Various (CA) Alan Davis
Middle-aged reporter Michael Moran always knew he was meant for something more. When an unexpected series of events leads him to reclaim his destiny, Miracleman is reborn. But Miracleman’s return threatens to unravel Moran’s life. Their connections to Dr. Emil Gargunza and Project Zarathustra bring with them disturbing revelations and trigger the return of a childhood friend who, beneath his sinister smile, has become something terrifying. Pushing the concept of the super hero to its logical conclusion, MIRACLEMAN is nothing short of a revelation. The series reinvented the super hero and 40 years later stands as one of the influential works in the comic book artform. This first-ever Omnibus edition collects MIRACLEMAN BOOKS ONE through THREE, complete with a massive trove of covers, original artwork and rare features. Collecting MIRACLEMAN (1985) #1, #3 and #6-16; MARVELMAN SPECIAL #1 and material from A1 (1989) #1 and WARRIOR #1-18 and #20-21 [as presented in Miracleman (2014) #1-16] – plus ALL-NEW MIRACLEMAN ANNUAL #1. MATURE In Shops: Mar 1, 2023 SRP: $100.00

PrintWatch: ONCE UPON A TIME AT END OF WORLD #1 2ND PTG HARDING
BOOM! STUDIOS
SEP228846
(W) Jason Aaron (A) Alexandre Tefenkgi (CA) Abigail Jill Harding
In this epic post-apocalyptic tale, Maceo and Mezzy have never met anyone like each other, and they’ll need all the help they can get to survive a planet ravaged by environmental catastrophe. This epic trilogy-each issue overflowing with 30 story pages-spans a lifetime as philosophical differences tear at the threads holding Maceo and Mezzy together. Will they, and the earth beneath their feet, ultimately be torn apart? New York Times bestselling, Eisner and Harvey Award-winning, and Marvel flagship writer Jason Aaron (Thor, The Avengers, Southern Bastards) launches his most ambitious creator-owned series to date with the first of three unique artistic partners – Eisner-winning artist Alexandre Tefenkgi (The Good Asian) – to take on a vision of the end of the world that’s brutal and nostalgic, whimsical and grounded… and ultimately, timelessIn Shops: Dec 21, 2022 Final Orders Due: Nov 28, 2022 SRP: $4.99

PrintWatch: SWAMP THING GREEN HELL #1 (OF 3) 2ND PTG CVR A DOUG MANHKE (MR)
(W) Jeff Lemire (A/CA) Doug Mahnke
The gruesome horror hit from Jeff Lemire and Doug Mahnke returns to complete its run in February and March of 2023, and now is the time to get back on board with a special reprint of the first issue! In the future, the last remnants of civilization cling to a nearly submerged mountaintop…and to finish humanity off, the Red, the Green, and the Rot have joined forces to send the most monstrous Swamp Thing ever created! Retail: $6.99 In-Store Date: 1/10/2023

PrintWatch: ROGUE STATE #1 Second Printing Cvr A Jasmin Darnell
(W) Matteo Pizzolo (A) Carlos Granda (CA) Jasmin Darnell
What if a contested Presidential election plunged America into turmoil? What if political violence consumed the streets? And what if a raging Supreme Court, in a strict interpretation of the 2nd Amendment, legitimized and deputized all militias, transforming the entire country into a paramilitary police state? What if a freedom fighter emerged from the chaos, raised a civilian army, and carved out a territory across the United States?… pushing out police, militias, and National Guard… enforcing its own laws… Sovereign. What if Americans refused to be governed? In this speculative fiction comic book series ripped from tomorrow’s headlines, a mysterious figure named Vya Of Brightstars will rise from the crisis, but is she a freedom fighter or a terrorist? Either way, her rogue state will not just blaze a path across America, it will also inspire others to raise their own armies… some in solidarity, others in opposition. “ROGUE STATE… is a genre known as ‘speculative fiction.’ Except that it doesn’t seem as speculative anymore.” (-The San Francisco Chronicle) From writer Matteo Pizzolo (CALEXIT, GODKILLER) and artist Carlos Granda (PIROUETTE, CALEXIT: SAN DIEGO), comes this tale of rebelling against tyranny, reconquering stolen land, punching fascists in the face, and building a better nation. Retail: $4.99 In-Store Date: 12/21/2022