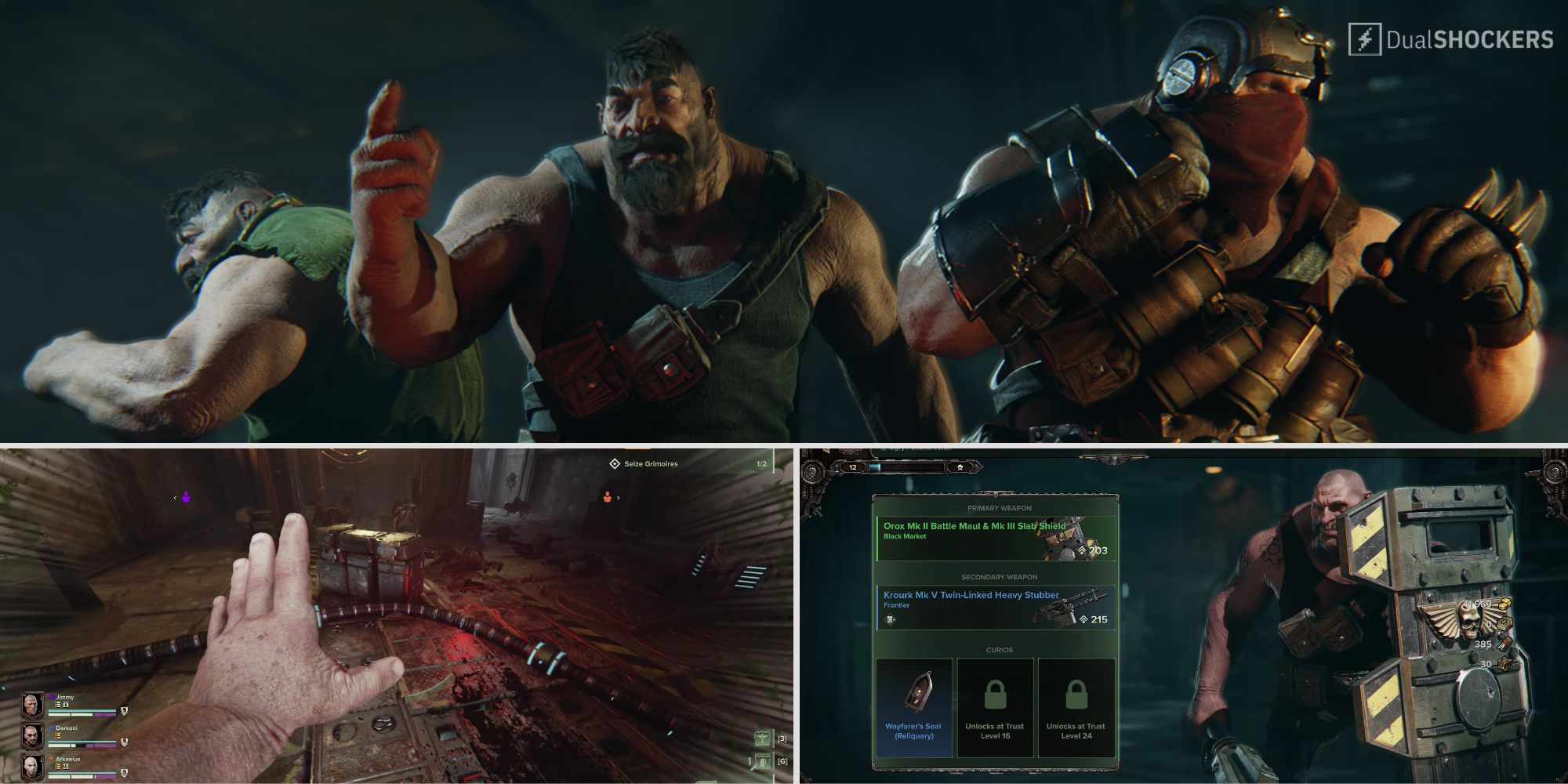 Ogryns are towering abhumans that are often used as meat shields and frontline soldiers in the world of Warhammer 40K. They fulfill a similar role in Darktide, where they specialize in melee combat and tanking while also providing valuable support for the rest of their party.

If you’re thinking about playing an Ogryn Skullbreaker in Warhammer 40K: Darktide, you have a couple of different options at your disposal. Turning your Ogryn character into a tank is the most obvious option, but you can also focus on damage and crowd control instead. Of course, in order to make the most out of your abilities and weapons, you’ll first need a proper build.

This first build is designed for players who love the idea of playing a tank in Warhammer 40K: Darktide. Unfortunately, there’s no taunting or any other similar abilities in the game, but you can still defend your allies by making sure enemies focus their attention on you instead of them.

The secondary purpose of this build is to allow you to play your Ogryn character as a support of sorts. Darktide doesn’t have a dedicated support class, but you can play the Ogryn Skullbreaker as a support to some extent by focusing on Feats that help your allies and rushing to pick them up whenever they get downed.

Battle Maul & Slab Shield: Your choice for melee is pretty self-explanatory. The Slab Shield is a fantastic defensive tool as it can block melee and, more importantly, range damage. You also get a Battle Maul to go along with it, so use it to bash enemies when you’re not defending with the shield.

There aren’t a lot of defensive modifiers to choose from, so get Block Efficiency for your first one and Sprint Efficiency for the second one. For traits, you’ll want to go with Skullbreaker and Confident Strike.

Grenadier Gauntlet: Although you’ll be spending most of your time in melee, having a good ranged weapon comes in handy when you need to soften up enemies from afar. The Grenadier Gauntlet is a good choice with this build since it gives you some nice AoE damage while also allowing you to stagger groups of enemies that are attacking your allies.

The Grenadier Gauntlet takes a while to reload, so grab the Reload Speed modifier to speed things up. You’ll mainly use the Grenadier gauntlet against swarms, so pick the extra Damage to Unarmored Enemies as the second modifier. And then, for traits, you can go with Pinpointing Target and Reassuringly Accurate.

There are a couple of ways of going about customizing your Curios, the most obvious of which would be to focus entirely on extra health to the detriment of everything else. However, you might not need a ton of health in some situations, so it’s better to spread things around.

Just as its name suggests, this second build focuses more on damage, so a lot of the Feats will revolve around heavy attacks and bleed stacks. Depending on the composition of your party, you can let Psykers or Veterans deal with Specialists and Elite enemies as you focus primarily on crowd control instead. That said, don’t hesitate to engage troublesome enemies when needed. You’re still an Ogryn, after all, and can go toe-to-toe with every type of enemy found in Warhammer 40K: Darktide.

Bully Club: While the maul and shield are your best option for tanking, you’ll want to switch to the good old Bully Club if you’re looking to deal more melee damage. The Bully Club has a higher reach than other melee weapons, thus allowing you to easily apply bleeding to more targets when fighting hordes.

The recommended modifiers are pretty straightforward. With extra Damage to Unarmored Enemies and extra Damage to Carapace Armored Enemies, you’re covering most of your bases. Bully Clubs have a lot of great traits, so feel free to pick differently, but with this build, we recommend going with Haymaker and Thrust.

Twin-Linked Heavy Stubber: The Heavy Stubber is a devastating weapon that can be used effectively against most types of enemies. It’s not particularly accurate, but that’s not a huge issue since you’re mainly going to use it at close to medium range anyway.

This weapon can hold a lot of ammo but takes ages to reload, so you should pick Reload Speed as one or both of its modifiers. If you don’t want two identical modifiers, your best bet for the second one is Increased Ranged Critical Strike Chance. As far as traits are concerned, Charmed Reload and Deathspitter are both good picks.

When customizing your Curious, you’ll generally want to go with a little bit of everything. Their traits and modifiers are primarily defensive or utilitarian, so you can’t rely too much on them to increase your damage output.

Next: Warhammer 40K Darktide: Everything You Need To Know About Grimoires And Scriptures