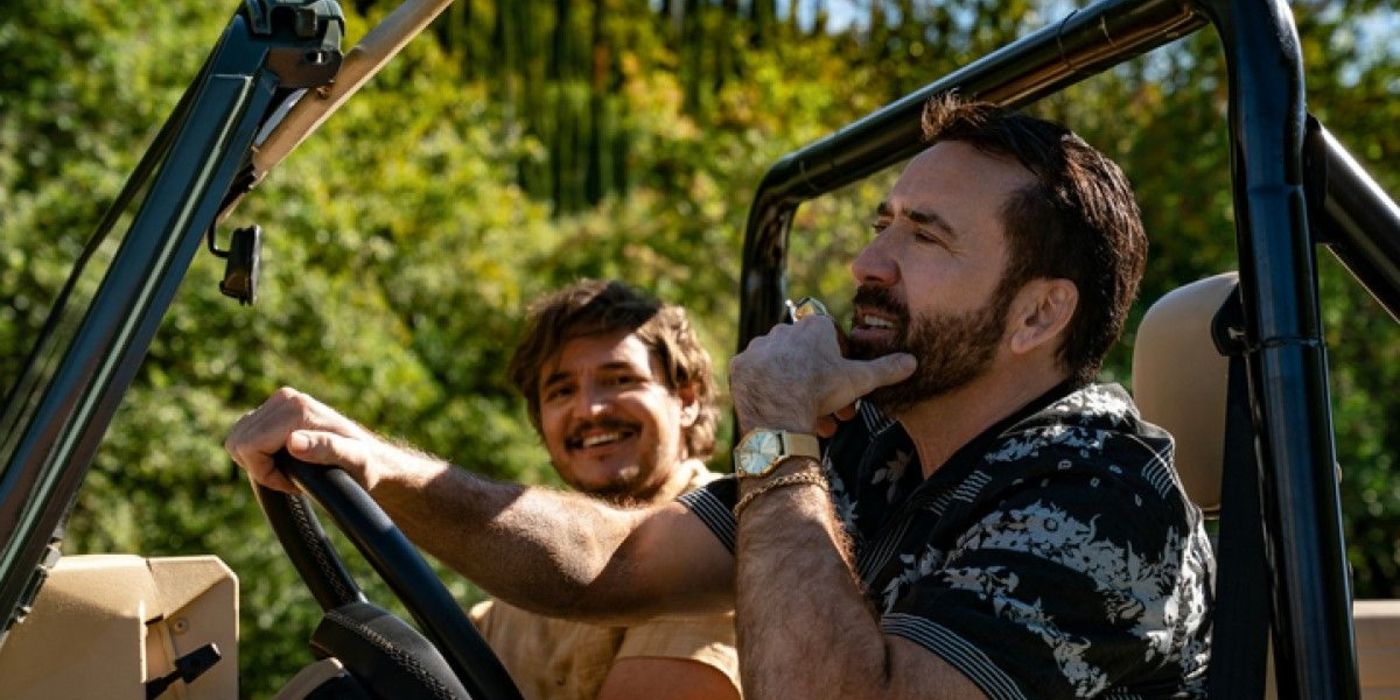 In last weekend’s The Unbearable Weight of Massive Talent, Nicolas Cage takes on the role he was born to play: Nicolas Cage. Specifically, a washed-up, on-the-outs, creatively unfilled fictional version of himself known as Nick Cage, who gets caught in a dangerous CIA plot to take down a billionaire playboy, whom the CIA suspects kidnaped a politician’s daughter, only to rediscover his love for the craft through his unsuspecting buddy friendship with this larger-than-life fanboy. Described itself as “the most Nicolas Cage movie ever made,” The Unbearable Weight of Massive Talent frequently references and satirizes Cage’s past films, both good and bad. But if this deleted scene made its way into the final cut, we would have gotten something almost transcendent: Nic Cage doing an impression of Nic Cage as Nick Cage. All while Pedro Pascal is also trying to perfect his impression of Nicolas Cage. It’s basically Nic-ception. An impression in an impression (in another impression?), in order to perfect another person’s Nic Cage impression. Suffice it to say, this deleted scene makes quite an impression, and you should check it out.

As seen in the one-minute clip, which was shared on The Unbearable Weight of Massive Talent‘s Twitter page, Nick Cage and Pascal’s Javi Gutierrez are shown lounging in a pool, playing a carefree game of truth or dare. Cage dares Javi to do his best impression of anyone, which results in Javi doing his take on Cage’s classic line, “What do you say we cut the chit-chat, A-HOLE!,” from Michael Bay‘s The Rock. Amused by Javi’s delivery, Cage proceeds to give Pascal a tutorial on how to do a proper wacky Cage line reading. He needs to say the quote faster, and he needs to make it count with “A-hole.” From there, Cage does his own impression of his famous line, and the drunken men go back and forth trying to nail it down, resulting in Cage’s casually (and quite beautifully) slipping in his impression of Sean Connery‘s Scottish brogue in the process. Eventually, after several impassioned attempts, Javi finally gets it right, and he hears something that any Cage fans would die to hear: “Beautiful. You got it!” A high compliment.

Though not necessarily essential to the plot, this brief deleted scene demonstrates what The Unbearable Weight of Massive Talent ultimately does best, which highlights the unsuspecting bromantic chemistry shared between Pascal and Cage. Their oddball buddy dynamic is engaging and surprisingly touching, and Pascal arguably walks away with Cage’s own meta-movie. This scene is a fun and amusing display of what this comedy aspires to be: a loving tribute to Cage’s own brand of insanity, allowing Cage to lean into the decades-long joke and revel in the broad, goofy absurdity that is Cage’s over-the-top persona. It’s Nicolas Cage, the meme, in movie form, as played by Nicolas Cage, the actor, doing his impression of Nic Cage, the frequently-parodied movie star who has become one of our hardest-working thespians. And this scene highlights the ways that the movie — and by extension, Cage — like to play into the bit.

But let’s follow Cage’s (and Pascal’s) advice and cut the chit-chat.

The Unbearable Weight of Massive Talent is playing in theaters. Check out the deleted scene below.

Will is a freelance writer who has been seen in a variety of print and online publications. See you at the movies.

More
From Will Ashton