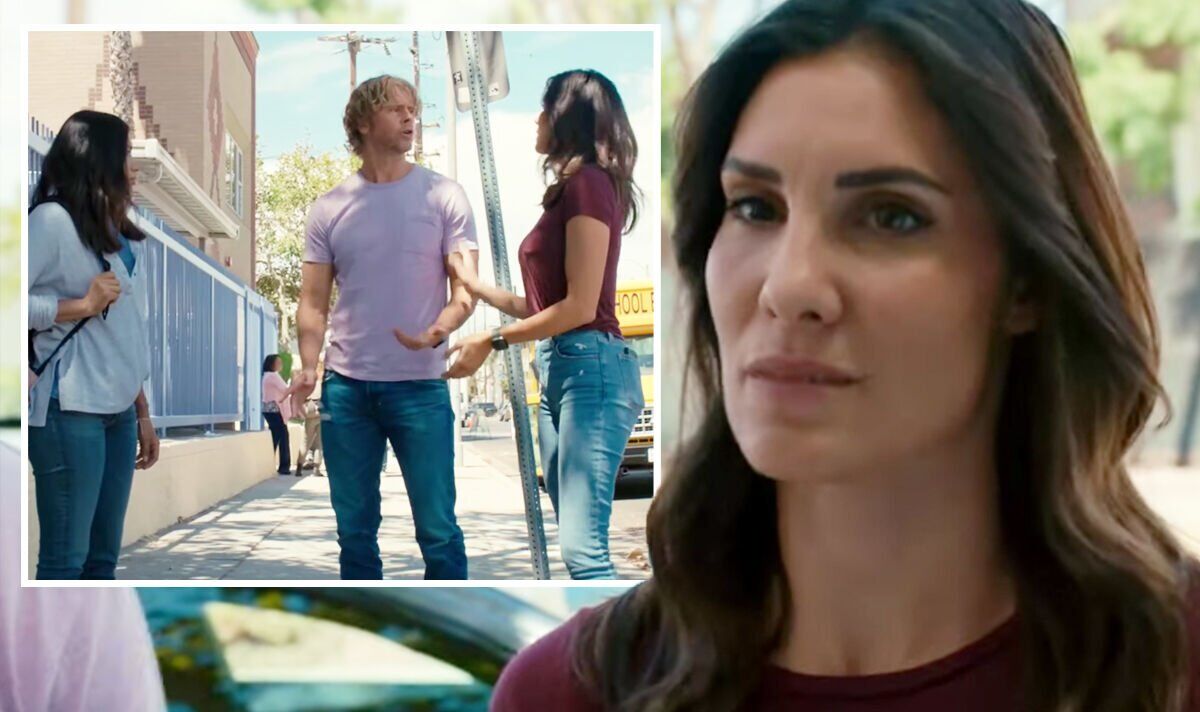 G Callen (played by Chris O’Donnell), Sam Hanna (LL Cool J), Marty Deeks, (Eric Christian Olsen), Kensi Blye (Daniela Ruah) and the rest of the NCIS: Los Angeles squad will be back on screens on October 9 in the season 14 premiere, Game of Drones. While the synopsis has teased some worrying news regarding the future of Hetty (Linda Hunt), a new sneak peek has confirmed Deeks and Kensi will have worries of their own when it comes to new foster child, Rosa (Natalia Del Riego).

In a preview clip from the season 14 premiere, Deeks and Kensi are clearly anxious over a rather important parenting milestone – sending their child to school.

Deeks and Kensi drop Rosa off at the school gates but it’s clear to see their profession and the worrying backstory Rosa has is playing on their minds.

“Feel free to call us at lunchtime, if you want to,” an erratic Deeks tells the teenager as he tries to play it cool.

“For what?” a puzzled Rosa replies before an equally apprehensive Kensi weighs in: “Oh, just to let us know how it’s going, but you don’t have to, it’s up to you.”

“You have our numbers memorised in case, yeah?” Deeks probes, prompting Rosa to confirm: “Yes, they’re in my phone.”

But this isn’t cautious enough for the new foster parents as Kensi replies: “No, but you should memorise them in case your phone gets lost or stolen or dies.”

Deeks agrees: “Right, and if you’re experiencing any bullying just call us immediately.”

“You think I’m going to get bullied?” Rosa asks as worry threatens to set in, leaving Deeks to scramble: “No, no, no – it was just like a theoretical, just in case.”

“Yeah, of course,” Kensi chips in a failed attempt to ease Rosa’s fears before again letting her overprotectiveness shine through by saying: “But you should always remember your self-defence training.”

“And your active shooter drills,” Deeks adds before Kensi tries to put her motherly head-on by saying: “Yeah, but more importantly, have fun.”

“That’s the most important thing, just have fun,” Deeks agrees, seemingly letting their guard down a touch.

However, Kensi’s strict rules and protective nature rears its head right away as she goes on: “Okay, also one of us will pick you up today but if not we’ll text you and maybe Naomi’s mum can drop you off at home.”

“In which case you have your house key, yeah?” Deeks interrupts as he continues to pepper Rosa with his own anxious probes.

Despite Rosa confirming she has the key and knows all the alarm codes, Kensi and Deeks insist she recites them.

Clearly aware that her new carers have ranted on for too long, Rosa tells them: “I have to go so I’m not late, bye!”

“Have fun, make friends!” Deeks yells, but will his and Kensi’s overcautious spark a rift between them and their new foster child?

NCIS: Los Angeles season 14 premieres on CBS in the USA on Sunday, October 9. A UK release date is yet to be announced.