Moon Knight episode 4 review: Like Tomb Raider, with a twist 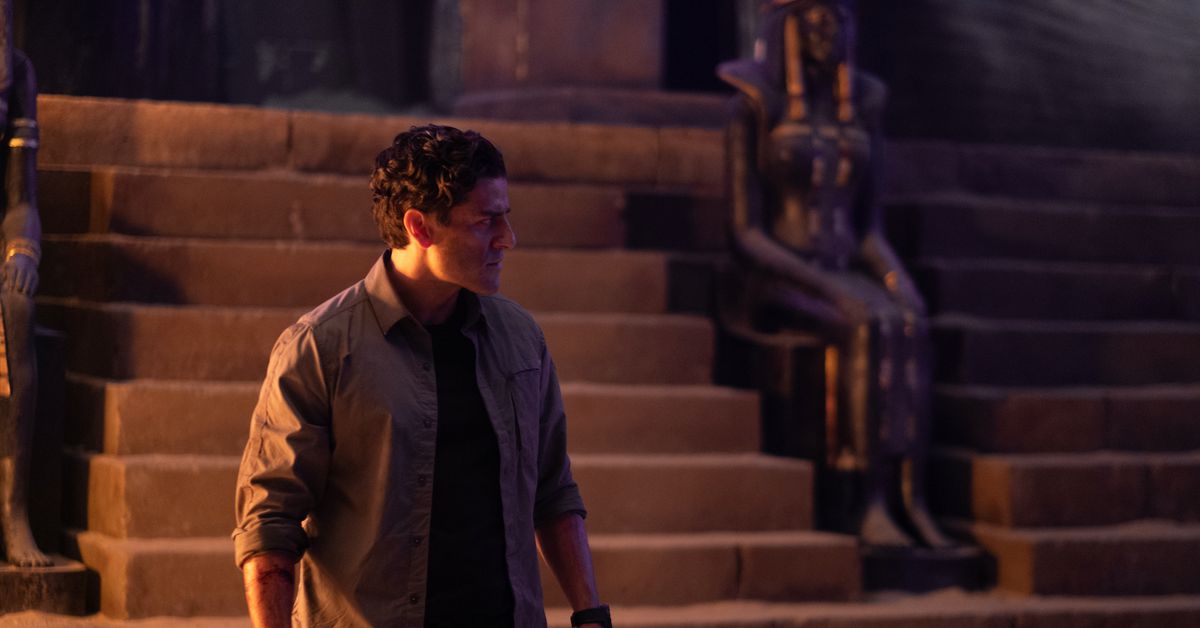 As enjoyable as Moon Knight has been to watch, succinctly describing it has remained a challenge. It took half of its six-episode run to give its protagonist a clear goal, and with three episodes left, it was hard to know what the series is building to. Thankfully, a strong sense of direction has also resulted in one of the most purely fun episodes of Marvel TV to air this side of WandaVision, leading Steven Grant (Oscar Isaac) and Layla (May Calamawy) on a race to beat the villainous Arthur Harrow (Ethan Hawke) to Ammit’s tomb. Call it Marvel’s Indiana Jones, or Tomb Raider, or Uncharted — it’s half an hour of adventure-movie action, with weird monsters and death traps and forbidden treasure. Were this what the entirety of what Moon Knight turned out to be, that would’ve been a good show. But there’s another 15 minutes to see, and they turn the entire series on its head.

What makes “The Tomb” such a good episode of Moon Knight isn’t simply because Ammit’s tomb has such a great series of setpieces, but because it’s also the place where every character’s arc collides. Steven, free of Khonshu and locking Marc out of his body, wants to prove himself the capable hero worthy of saving the day and beating Harrow to Ammit. Layla, while willing to help Steven, has also had her own question lingering in the background: Who killed her father on an expedition long ago? Marc, forced in the background, continues to be in denial over how broken he is. Harrow tips over all these dominoes by finding Layla alone and suggesting that Marc Spector is responsible for her father’s death.

The revelation builds to a confrontation in front of Ammit’s sarcophagus, where Layla demands Marc take over from Steven to answer her questions. He tells her one of his mercenary partners “got greedy” and murdered everyone at the archeological site they were hired to raid, including Layla’s father; even Marc almost died out there.

Marc’s defense is an oblique retelling of Moon Knight’s origin story, one that Moon Knight has resisted telling in full until it’s relevant — which is admirable, if a bit frustrating. It’s also, unfortunately, the origin story of Marc’s relationship with Layla, as he wanted to tell her what happened but couldn’t, striking up a friendship and marriage out of his guilty conscience. Layla is furious to learn this, but their confrontation gives Harrow and his men enough time to catch up with, and shoot, Marc. He doesn’t die, but instead wakes up sedated in a psychiatric institution.

This last twist is the episode’s most exciting, but also most suspect. To those unaware of Moon Knight’s comic book history, the shift to an asylum might read as the series embracing a shopworn trope. TV characters being thrown into mental institutions for shock value goes back to the days of Buffy the Vampire Slayer and beyond. It’s an arresting visual that preys on both common fears and the social stigmatization of mental illness, and is usually wrapped up at the end of an episode, or perhaps a two-parter.

Moon Knight, however, has more reason than most to go here. For the first half of the series, Moon Knight has been reluctant to tip its hand toward any one influence. Deep-cut characters abound (last week’s antiquities collector, Anton Mogart, is better known in Marvel Comics as the masked thief Midnight Man) and series mainstays like Layla and Arthur Harrow (hell, even Steven Grant) are thoroughly transformed in this incarnation, giving Moon Knight its own unique texture. The series is not too steeped in the MCU, and not too beholden to comics lore. This is a strength that makes it potentially the most accessible MCU endeavor in some time, which makes its loose plotting and odd pacing all the more frustrating. But when Marc Spector wakes up in an asylum? It’s the sort of scene you can, like Leonardo DiCaprio in Once Upon A Time in Hollywood, finally sit up and point to an individual comic book story for.

That comic is 2016’s Moon Knight by Jeff Lemire and Greg Smallwood, a 14-issue series that began with Marc Spector in a strange asylum, where he was told his career as Moon Knight was a figment of his imagination. In “The Tomb,” the Disney Plus series gets about as close to straight adaptation as the MCU does, and while it may go no further than this brief scene, the moment is instructive.

Lemire and Smallwood’s comic was a story about acceptance, and in the final act of “The Tomb,” Marc Spector finds himself in the unbelievable situation of having Moon Knight’s villain as his psychiatrist and the events of the series a fiction; “Steven Grant” is even implied to be based on a pulp B-movie about an adventurer of the same name. Yet even in this state — powerless, in a drugged stupor — Marc Spector knows this isn’t right, and he needs to find help: in the form of Steven Grant, trapped in a sarcophagus deep in the institution. Here, in this labyrinth where Marc Spector finds his broken mind, Moon Knight inches toward an idea that may make it resonate when the credits finally roll on its last episode: that Marc Spector and Steven Grant need each other, if only to say that they aren’t OK, and maybe begin to heal.

Make My MMO: Embers Adrift is breaking the world