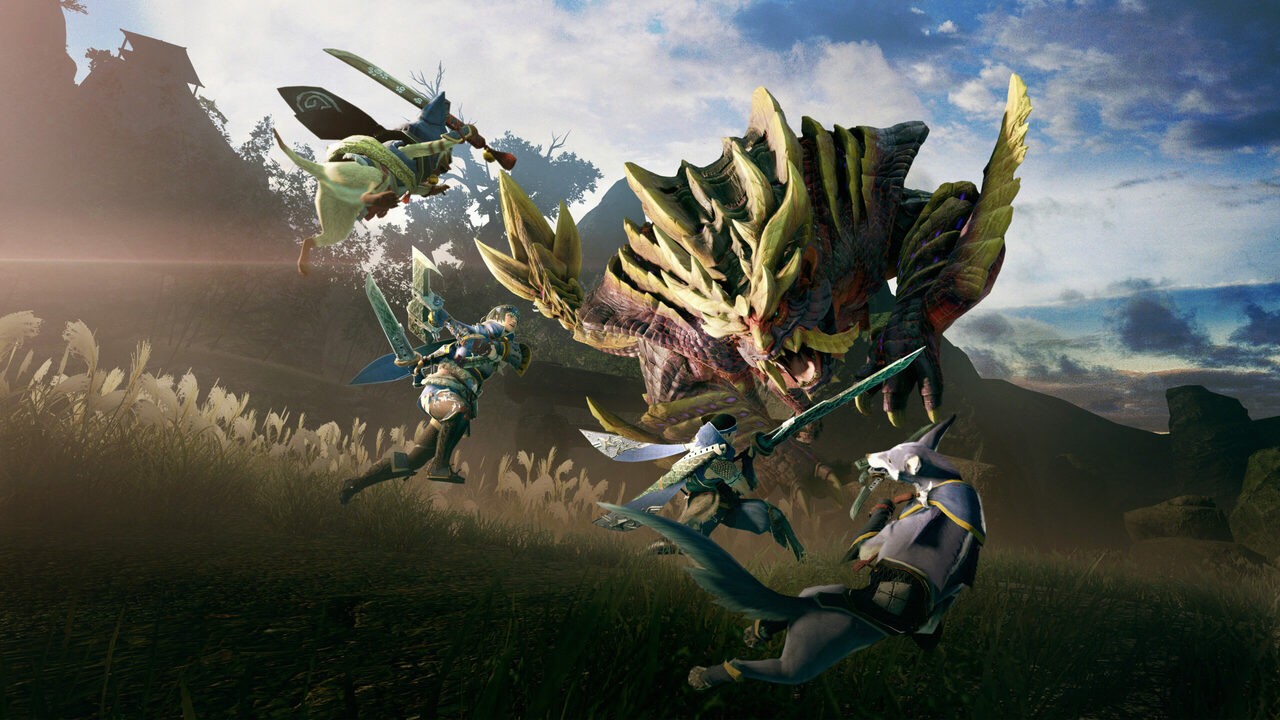 Going into World, it felt like Capcom’s design philosophy was to make a classic Monster Hunter experience, but pile on the quality of life changes to make the game more accessible. Rise takes that ethos even further, focusing on the movement mechanics of the series to create the best-feeling Monster Hunter game ever made.

First off, the new companions: palamutes join the beloved palicos to aid you in your hunt. While these crafty canines can do the standard attack and support tasks that palicos (or those two little freaks from MH3) have been able to do for years, they can also be mounted like a miniature horse. This not only allows you to get around faster without using your own character’s stamina, it also lets you sharpen your weapon while on the move, which is a godsend. Most importantly, you can also drift while on your dog, which is sick.

The other central mechanic in Rise is the wirebug gauge, which we cannot gush about enough. The extra layer to traversal, combat, and pacing that the wirebugs add completely changes the game in ways we haven’t seen in the series since Monster Hunter 3’s divisive attempt at underwater combat. Wirebugs work in many ways, the most prominent being their core use as a zipline, allowing hunters to fly around the map in a way previously reserved for the insect glaive weapon.

These bugs also add to the game’s combat with extra offensive and defensive options. Every weapon hosts their own switch skills — the title’s equivalent of special moves — which range from souped-up attacks like the great sword’s catapult to defensive options like a charge blade parry, which instantly fills its phial meters. Each weapon comes with unlockable moves to customise your experience, which more than make up for the lack of any new weapons in this release. In terms of defence there’s the wirefall, which allows you to negate a knockdown at the cost of a bug. This can be used to escape those tight situations where you’ve been knocked through the air, primed to lose the fight.

But what is a Monster Hunter game without monsters? Rise boasts a roster of 40 monsters (with six having powerful apex variants) and it’s a mix of new and classic beasts. As the land of Kamura is based on ancient Japan, the new creatures are primarily based on Japanese folklore — and the result is some of the best designed foes in the series. Front and centre is Magnamalo, whose samurai-inspired look makes for one of the best flagship monsters the series has seen since the sadly-absent Gore Magala. Our favourite of the bunch has to be the Goss Harag, a hulking ice beast inspired by Oni-yokai.

Rise’s story revolves around the Rampage, a calamity that once besieged Kamura village 50 years prior, and has now mysteriously returned. This ties into the rampage missions which work as a sort of tower-defence game in which you set up turrets and traps to repel monsters before they can destroy the gates protecting the village. Rampages are at their best when played with one or more extra hunters, but they’re more than serviceable on their own and offer a fun experience outside of standard hunts.

One other way Rise improves upon World is through its multiplayer integration. In World, all of the game’s hunts were accessible from the same quest board. While it was a good idea in theory, it led to a lot of faffing about as certain missions couldn’t be played in multiplayer until certain criteria was met. In Rise, it’s much cleaner. You have the village hub, which consists of easier low-rank quests for solo players; then there’s the gathering hub, where the missions designed for multiplayer missions are housed (but you can still play these solo). This is where you’ll be spending the majority of your time, as upon completion of the village quests or the low-rank quests in the multiplayer hub, you gain access to the gathering hub-exclusive high-rank quests, which offer up new monsters to hunt as well as harder variants of previous monsters with new attacks and new material drops.

You also can’t have a Monster Hunter game without great tunes, and thankfully Rise delivers here, too. The first time we heard the horns kick in on the Sandy Plains flamenco-inspired battle theme, the hype hit us like a tidal wave. Even songs that previously existed in the series like Spark of Blue (the theme of Zinogre) get their own ancient Japan-inspired remixes. We also can’t talk about the music without mentioning the absolutely wonderful ‘fluffy bunny dango’ tune that plays during the adorable cooking animations, which had us smiling from ear to ear the first time we saw it.

Rise was quite the looker for the Nintendo Switch at launch thanks to Capcom’s incredible RE Engine. While it still looks nice here on PS5, there are noticeable visual downgrades from the likes of World in some instances. However, worse visuals are a fair trade for the silky-smooth frame rate — something the Switch version doesn’t have.

This edition is also fully updated at launch, so issues present when Rise originally released — like the missing conclusion — are not a problem here. But there is the elephant in the room in that the Sunbreak expansion isn’t included at launch, and is instead arriving in spring. Considering this isn’t a full price release, we don’t feel like this is too much of an issue, especially since there’s already enough content in the base game to easily last you until the spring.

Monster Hunter Rise is the new standard for the series, and it’s a delight to finally have it on PlayStation, thanks to the improved frame rate and visual fidelity over the original release. There’s so much to it that there are still many things we haven’t mentioned, like the new monster riding, sped-up collecting and mining, or the hunting helpers. It’s a game this reviewer put over 100 hours in on the Switch, and we could be looking at 100 more on PS5. Monster Hunter’s eternally satisfying gameplay loop is met with now-essential quality of life and traversal improvements.