Microsoft and Asobo have put together a hefty update to celebrate the series’ history, introducing a number of historical aircraft. Many of the said aircraft have been in past releases. The update also includes some of the various Missions of its predecessors. It’s a fairly elaborate package, especially considering it’s completely free. And, really, that’s what makes this update significant, since it marks a trend in the saga of the very interesting way that Microsoft Flight Simulator has been and will be supported in the years to come.

Nearly half of the aircraft included in the 40th Anniversary Edition have been in past sims within the franchise. Of course, their newest renditions are leaps and bounds more advanced than anything we’ve seen before.

Most of these new models have actually been created by smaller studios that specialize in such add-on aircraft development. For example, iniBuilds handled the illustrious new Airbus A310, and Aeroplane Heaven was responsible for the beautiful workhorse that is the Douglas DC-3.

Regardless of their source, however, each of the new planes have quite a bit of detail packed into them, and I marveled at all the intricate texture work both inside and out. That said, the actual flying experience, and by extension the overall practicality of this update, ended up coming off as interesting, to say the least.

Easily my most favorite out of the bunch is a toss-up between the DC-3 and the DeHavilland DHC-2 Beaver. Very different aircraft from each other, but both are great piston engine planes that are relatively easy to become acquainted with. What certainly helps is the fact that they each have a retrofitted cockpit option that includes modern avionics, allowing for the use of both autopilot and GPS functionality. Some other historical aircraft, such as the Staggerwing for example, completely lack such commodities even as an option. So, it’s nice to have such functionality present. I especially liked the attention to detail with the Beaver; its huge, antique radial piston engine would shake the cockpit itself along with the gauges. The effect can be disabled, but it’s the little things like this which add a sprinkle of pizzazz making the package special.

The DC-6 — overall a great handling plane — only really disappointed me in the sound and effects department. I was surprised at how quiet it sounds inside the cockpit; the external audio is great, however. This is a big, lumbering plane with exceptionally loud, rattling engines — a source of much discomfort back in the day when it was used in passenger services. However, it’s a defining characteristic of such aircraft from the post-war era. So, making it as silent as a modern turboprop, while technically nicer, takes away from its charm.

Not to mention the same cockpit-rattle effect like in the Beaver should be present, but isn’t. The PMDG DC-6, which is the actual follow-up to the DC-3, is a more comprehensive add-on overall. It really captures the headache and charm of flying such a vintage prop. However, Aeroplane Heaven has already announced it will be providing continuous updates to the DC-3 package for a while. And unlike the DC-6, the DC-3 is completely free. So, these aren’t really complaints as much as they are simple observations that may very well become outdated within the next few weeks and months. 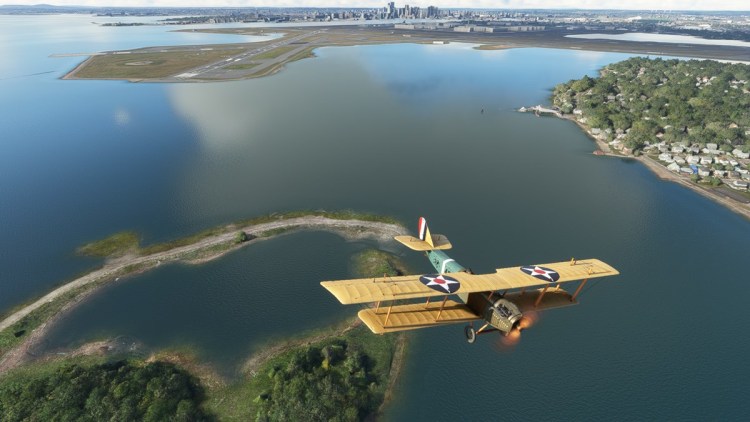 Having spoken so highly of these two fine machines, what about the rest of the package? While used these two the most out of all the new planes. I certainly did try a few others, too.

The Curtis Jenny, a former warplane, is interesting. Its wood and cloth frame is the definition of a simple flying machine — it was birthed just after flying became a “real thing,” after all. That said, I don’t see how useful it is other than just simple short hops when you just want to fly low and slow. It has no avionics, no brakes; it’s a pretty motor with wings.

On the flipside, you have the massive Spruce Goose. In the real world, this behemoth didn’t fly for more than a few seconds — and only once. Thus, you can now finally use it as it was intended here in Microsoft Flight Simulator – 40th Anniversary Edition. 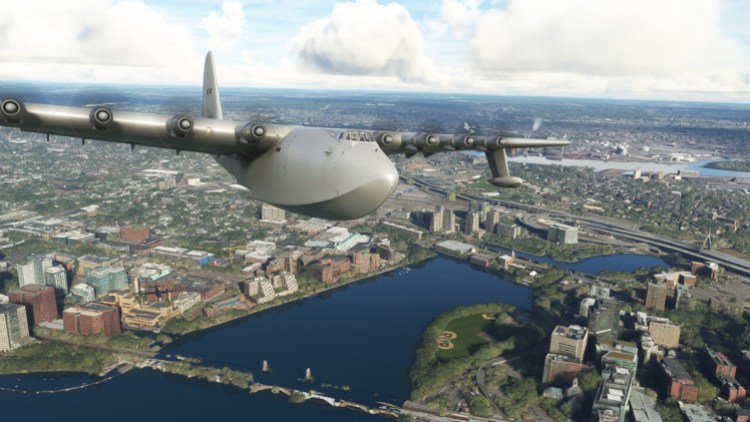 That said, it’s dubbed the “The Flying Boat” for a reason — it pretty much handles as such. Definitely useable, but considering the fact it has no landing gear, it can only be launched from and landed into bodies of water.

The water physics of Microsoft Flight Simulator are still rather rudimentary, which makes any amphibious plane only somewhat useful. Although that’s quite strange considering we’re seeing more of them in the Marketplace. Hopefully it’s an area Asobo will improve in the future. For a more versatile amphibious experience, the classic Grumman Goose is technically the better option. I like it, though I noticed some annoying squeaking sound effects. 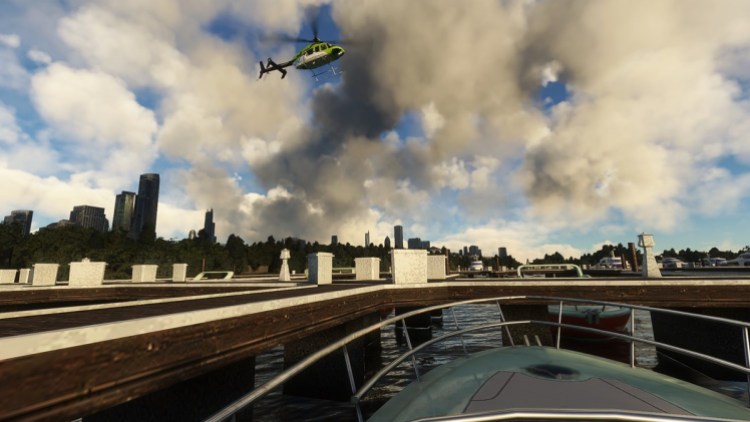 The tale of the “Whirly Birds”

The long-awaited arrival of full helicopter support is one of the biggest facets of the 40th Anniversary Update. These have long been a staple in the Microsoft Flight Simulator series, their omission when the sim initially launched was odd. That said, there have been helicopters released as both paid and free add-ons well before this update, but their systems were never fully realized until now.

The two included models in this update, the Bell 407 and Guimbal Cabri G2, are a bit of a toss-up. The latter is certainly my favorite, as it’s not only smaller but noticeably easier to handle. I was able to conduct a great scenic tour of flying from the edge of Connecticut into Rhode Island; a route I’ve been doing in real life. However, I did that in a car. So, it was great to see the scenery from a different perspective. The Cabri also proved to be useful for exploring the metro area of Chicago by landing and taking off from the beautifully restored Meigs Field, a returning classic airport from the series’ past (which in real life has been demolished). 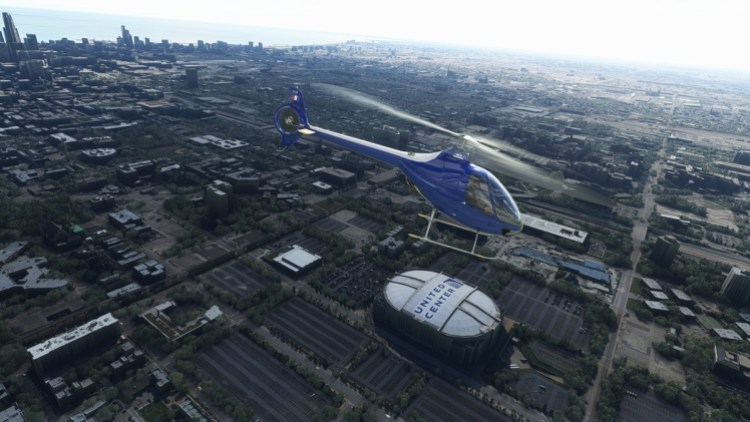 The Bell, at least in its current state, feels like more of a wild stallion. It’s twitchy and yet also sometimes unresponsive, but is paired with visual and audio excellence. There’s already a community-made improvement mod out there to help alleviate its issues. When I found it, I realized these problems weren’t even just in my head.

That said, the sentiment is similar for the last feature of this update I took a look at — arguably the biggest deal of all. 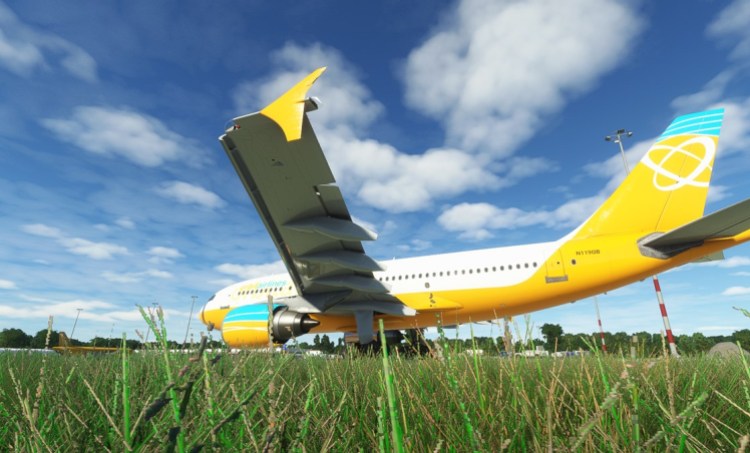 IniBuilds’ Airbus A310 was heralded as a gem since this update was initially announced. Described as a true “study-level” aircraft, the fact that it was being added in for free was made out to be quite the deal for sim fans. And, that’s true. Other intricate aircraft like the PMDG 737-700/800 and Fenix Airbus A320 do add water to this argument, as they all cost more than a copy of Microsoft Flight Simulator itself.

All things considered, iniBuilds has done a great job with the A310. It looks good both inside and out, and its sound package is nice too. The flight dynamics feel good and it performs well. It functions similarly to the A320, which has existed as the premier default airliner in the sim since launch. This truly is the most advanced default airliner in the entire Microsoft Flight Simulator roster, as it has more advanced functionality than even the Boeing 787, which can only be obtained by purchasing the expensive “Premium Deluxe” version of the sim.

Yet, it seems to need a little more optimization tweaking.

I struggled to fly the A310, not because the plane itself is bad, but because its intricate systems seems to be quite taxing on my machine. Other users have voiced similar findings, as it seems to really bog down framerates across the board. In my own experience, I lost over 10 fps, with the sim chugging at 15-20 frames per second on average. I took into into Chicago O’Hare, and experienced a slideshow performance of a mere 5 fps as I landed and taxied in. 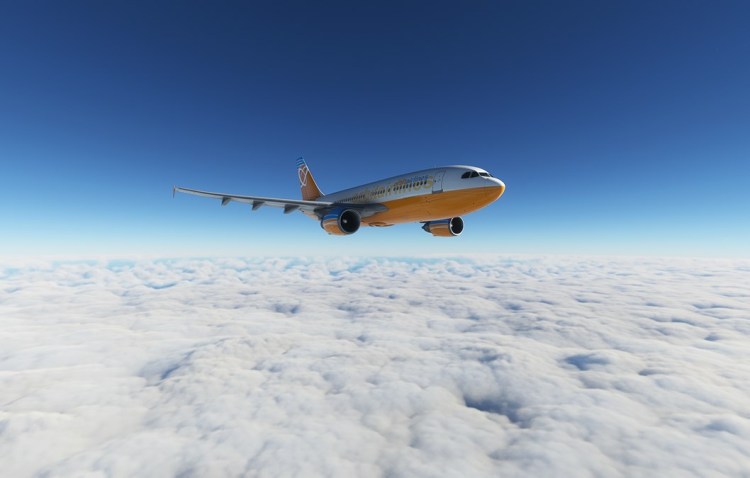 This was easily the most painful experience I’ve had with Microsoft Flight Simulator since launch, a fact that stings even more considering the very recent release of Sim Update 10 made a dramatic improvement to the sim’s performance across the board.

Thankfully, iniBuilds is still improving the A310, and the first update is already slated for a release soon. While this particular one doesn’t seem to target performance improvements, hopefully this will be addressed overtime. 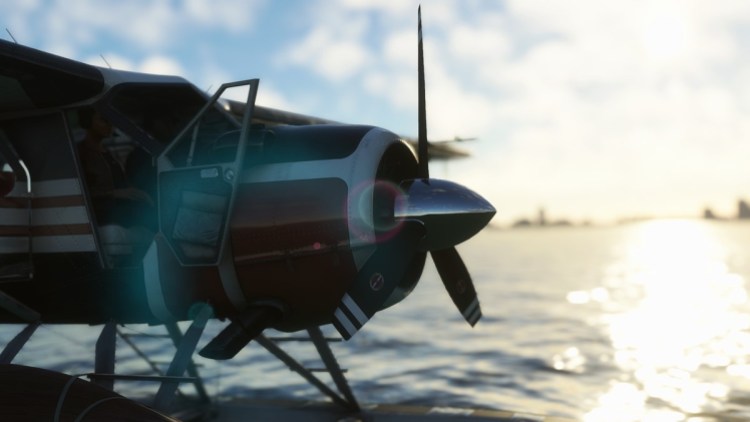 As I mentioned at the onset of this piece, the overall practicality of this 40th Anniversary Edition for Microsoft Flight Simulator is interesting to consider. On one hand, Asobo and its partners have done a great job at building meticulous virtual renditions of these beautiful aircraft, and it’s certainly great to fly some of them again. But, considering they’re almost all historical, and/or of a different aircraft type, that makes the use cases for them all over the place.

Some folks will toy with the old birds for a bit and then get bored, craving the performance of the more advanced avionics of modern aircraft. The helicopters are great, but they’re harder to fly than a traditional plane. That said, at least the gorgeous scenery now warrants getting close and flying low, which is something ‘copters offer far better than any plane. 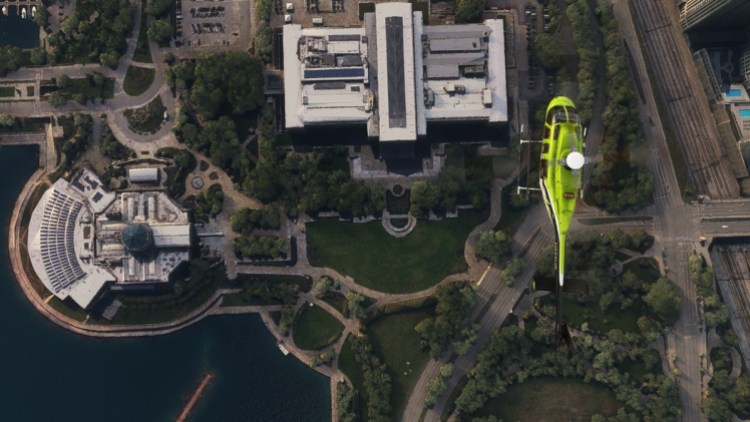 I didn’t even touch on gliders because they literally are only useful in certain areas, with the right weather, and aren’t meant for practical transport. They’re meant to fly for fun, but that’s not everyone’s cup of tea anyway. Also, the Missions, while great, can be largely ignored because there’s no real “reward” for completing them. While they do give you a set of practical objectives to accomplish, there’s still no real sense of progression within the sim.

True, “aimless fun” has always been the real intent behind flight simulation, but with Microsoft Flight Simulator being more robust and complex than ever, perhaps its high time the series’ underlying mechanics also expand. This update is great — free content (and a lot of it), always is. But, it did leave me with this feeling of yearning for more. Time will tell just how far the series expands within its next five, 10, and perhaps even 40 more years.