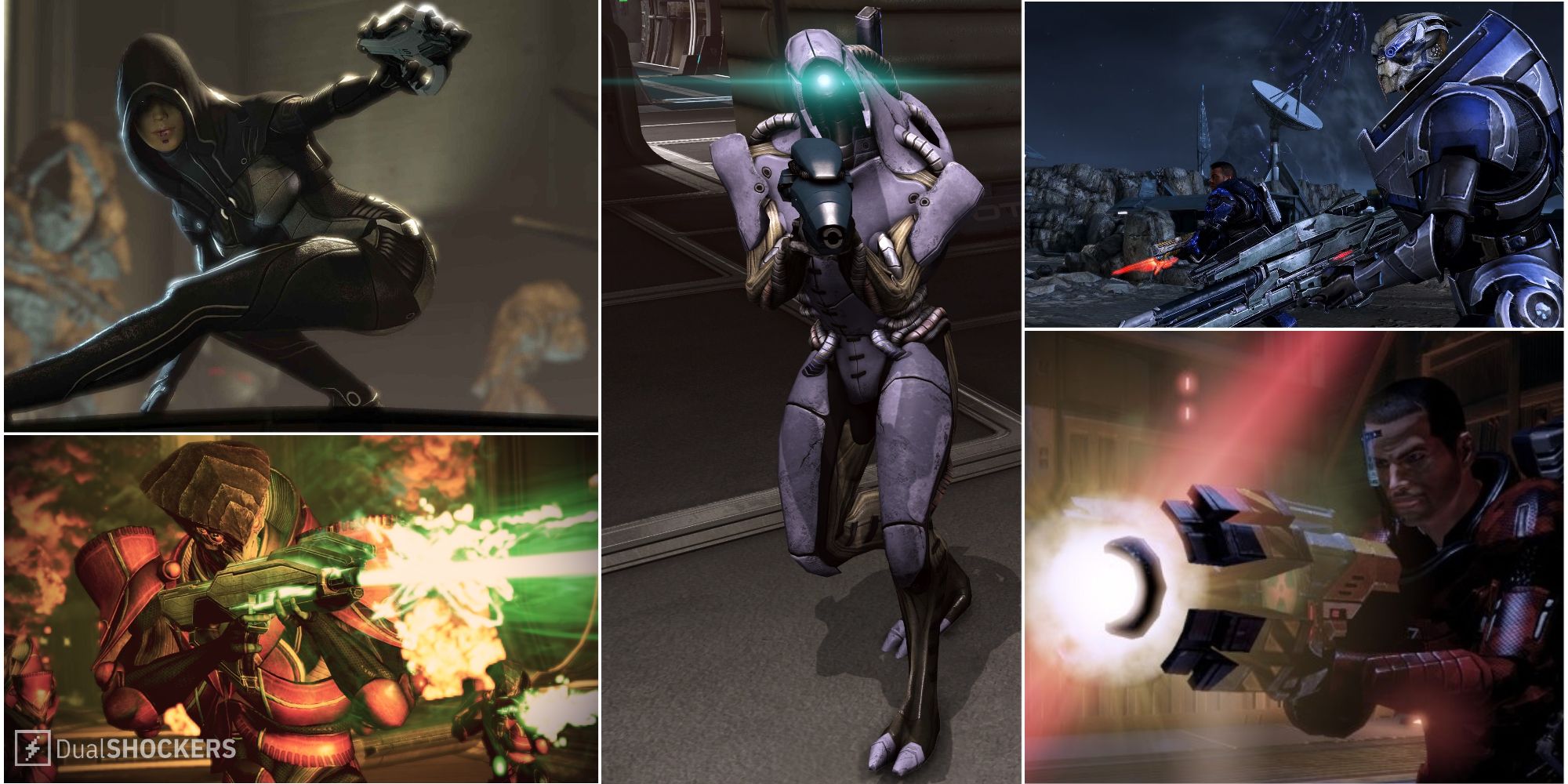 Despite being known primarily for its branching narrative and romance options, Mass Effect Legendary Edition is, at the end of the day, still an action RPG series. That means there’s a lot of fighting to be done throughout the trilogy and plenty of weapons to choose from.

The M-90 Indra is a medium-range fully automatic sniper rifle. When you think of sniper rifles you’re generally picturing a one-shot, one-kill type of weapon but the Indra works a bit differently. The weapon doesn’t do a massive amount of damage but has a very high rate of fire and a clip large enough to allow you to take out multiple opponents before you need to reload.

The M-90 Indra is also pretty accurate for a fully automatic weapon and is lighter than a lot of other sniper rifles. Back in the day, you would need to own the Mass Effect 3: Firefight Pack DLC in order to unlock this weapon but in Mass Effect Legendary Edition you can simply buy it for 10,000 credits, which is quite cheap compared to other weapons on this list. The M-90 Indra also makes an appearance in Mass Effect: Andromeda.

The Geth are one of the strongest races in the galaxy so it should come as no surprise that they possess quite an impressive array of powerful weapons of all shapes and sizes. While the Pulse Rifle isn’t the most devastating of their creations, it is the most versatile.

The Geth Pulse Rifle has an incredibly high rate of fire and next to no recoil when aiming, even on full auto, though its projectiles do have a tendency of flying all over the place when firing from the hip. The weapon’s impressive fire rate makes it ideal versus barriers and shields while its lightweight makes it a good choice for classes that rely more on powers than weapons. In Mass Effect 2 the Geth Pulse Rifle can be acquired during Tali’s recruitment mission. Meanwhile, in Mass Effect 3 you can find it during Priority: Geth Dreadnought or buy it later for 10,000 credits.

The M-12 Locust is a medium-range weapon that also performs admirably at long range thanks to its high accuracy and low recoil. However, the most impressive aspect of the M-12 has to be its lightning-fast reload speed. The weapon doesn’t perform well against armor but is great against everything else. The M-12 Locust can be acquired in Mass Effect 2 during Kasumi’s loyalty mission. Meanwhile, in Mass Effect 3 you can either get it for free during Priority: Horizon or buy it later for 7,000 credits.

True to its name, the M-490 Blackstorm fires mini black holes that pull in anything caught in their path. You can think of it as a gun that shoots a better version of the Singularity Biotic power. The M-490 does way more damage than Singularity and the black hole explodes once it expires, killing pretty much anything caught in the blast radius save for the toughest of foes.

Like all heavy weapons, the M-490 has a couple of drawbacks that prevent it from being too overpowered. The biggest drawback is that the weapon has a very long charge time that essentially forces you to use it only when you’re safe behind the cover. The weapon also has a limited amount of ammunition, although that’s not a big issue since you can often clear an entire enemy squad with just one shot. The M-490 Blackstorm Singularity Projector can be purchased at Harrot’s Emporium on Omega for only 5,000 credits. Quite a bargain.

Much like the Geth, the Collectors have an impressive arsenal of exotic weapons at their disposal. While the Collector Assault Rifle deserves a special mention for its versatility, the Collector Particle Beam is the weapon you’ll want if you’re looking for raw stopping power.

The Collector Particle Beam is another heavy weapon but has a much higher ammo capacity than most of its counterparts. The weapon fires a beam that quickly disintegrates shields, barriers, and armor, and it can do so at almost any range. This is also a very precise weapon with little recoil, however, using it does leave you vulnerable to return fire since you can’t use it effectively from behind cover. The Collector Particle Beam can be acquired during the mission on Horizon.

This entry is a bit odd since it covers multiple weapons instead of just one. Weapons in the original Mass Effect worked a bit differently and are difficult to compare against weapons found in the sequels. The game has a more straightforward progression system where you get increasingly better weapons the more you play. About midway through Mass Effect 1, you can acquire a set of weapons that’s objectively better than anything else in the game.

The Spectre Master Gear set consists of four weapons, one for each type of gun available in the game. These weapons can be acquired from the C-Sec Requisitions Officer on the Citadel or the Requisitions Officer on the Normandy, however, they are very expensive. We’re talking over a million credits for the most expensive piece, which is the HMWSR X Sniper Rifle. Unfortunately, these weapons don’t do anything special aside from having the best stats.

Also known as the Nuke Launcher, the M-920 Cain is the most destructive weapon in Mass Effect Legendary Edition tied with the Reaper Blackstar, which is functionally almost identical. The Cain is the definition of high-risk, high-reward as it can only be fired once or twice per mission and takes a whopping four seconds to charge, during which time you can’t hide behind cover. However, if you do manage to fire a shot with this bad boy, you can expect it to delete everything on the screen. Well, unless you’re playing on Insanity Difficulty.

It’s worth noting that the M-920 Cain is one of the few weapons in the game that does friendly damage, so you don’t want to fire it at nearby targets because your party will likely be caught in the blast zone. Also, keep in mind that the blast even passes through cover. In Mass Effect 2 the M-920 Cain can be researched on the Normandy for 25,000 Iridium. The weapon can also be found in Mass Effect 3 during Priority: Earth. Meanwhile, the Reaper Blackstar can be found during Priority: Palaven and there’s an additional one in the Leviathan DLC. Heavy weapons are discarded after use in Mass Effect 3, which makes the Mass Effect 2 version of the Cain substantially more useful.

Pound for pound, the Black Widow is the most powerful sniper rifle in Mass Effect Legendary Edition. This is an improved version of the popular M-98 Widow antimaterial rifle that can hold up to three rounds in its clip, as opposed to its predecessor’s. The shots do slightly less damage, but that’s a minor drawback considering you need to reload it less often.

The Black Widow is one of the heaviest weapons in Mass Effect 3, but its weight is somewhat mitigated by its high accuracy and incredible stopping power. Still, this isn’t the sort of weapon you’ll want to use if you rely heavily on Biotics since it significantly increases their cooldown times. The Black Widow can be purchased from the Spectre Requisitions terminal for an eye-watering 125,000 credits. By comparison, the M-98 Widow costs a mere 10,000 credits.

The Particle Rifle is a weapon of Prothean design modified to work without regular ammunition. Instead, it has a cooldown system similar to weapons found in the original Mass Effect. Because of this, the Particle Rifle can never run out of ammo and, if you’re careful, does not need to be reloaded. The rifle works similarly to certain Collector weapons in that it fires a continuous beam of energy that gets increasingly more devastating the longer you hold the trigger, though there is a cap on how much damage it can do.

The Particle Rifle is a pretty unique weapon that can make short work of most types of enemies once it’s ramped up. However, you do need to be mindful not to overheat it, and you’ll definitely want to enhance it with a magazine upgrade mod because this puppy quickly burns through its energy reserves. The biggest downside of the weapon is its range, which is a bit shorter compared to other assault rifles. The Particle Rifle is obtained automatically after completing Priority: Eden Prime.

Unsurprisingly, most N7 weapons are very good, but the Valkyrie might just be the best of the bunch. What sets this weapon apart from other assault rifles is its two-burst firing mode that keeps your aim accurate whenever you’re switching targets while also helping you conserve ammunition. The projectile damage is pretty standard for an assault rifle, but it’s worth considering that you’re firing two shots every time you pull the trigger, both of which are guaranteed to hit your target at short to medium range; less so at long range.

Aside from being slightly heavier than the average assault rifle, the N7 Valkyrie doesn’t suffer from a lot of other drawbacks. It can take a bit of time to get used to the burst fire, but once you do, you’ll probably never want to go back to full auto. The N7 Valkyrie can be obtained during the Omega DLC and can also be purchased from Harrot’s Emporium or the Spectre Requisitions terminal for only 7,000 credits.

Next: Fallout 4: Most Powerful Unique Weapons