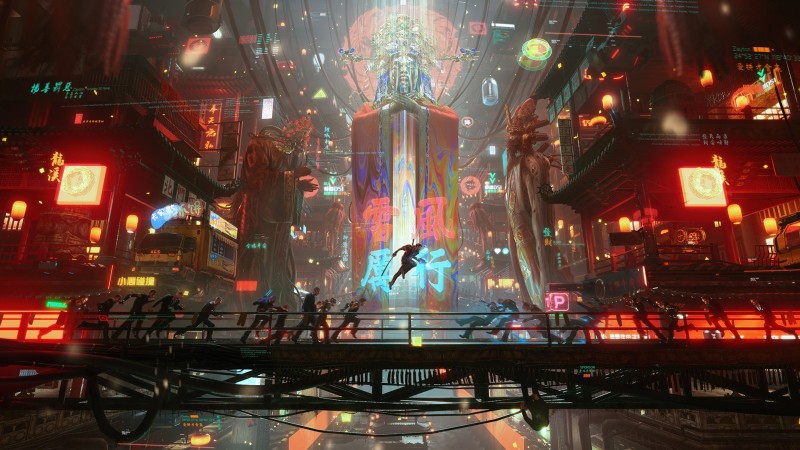 Loopmancer is an upcoming cyberpunk time-looping action roguelite by eBrain Studio poised to slash its way to your living room this year. The game looks promising, and I got to test my mettle against a demo to see how well it’s shaping up.

The story centers on a detective named Xiang Zixu, who gets killed during a mission tracking an underground crime lord. However, he awakens back in his apartment earlier that morning. That’s right, our officer is trapped in a mysterious loop, but he retains memories of his past “lives.” Figuring out the cause of this loop will be one of the core plot points, and eBrain promises that players’ accumulation of knowledge plays an essential role in shaping Loopmancer’s storytelling. For example, there are multiple outcomes based on your actions. You may decide choices differently based on events from a prior loop. It was hard to see the scope of that vision during this small slice of the game; I only saw incidental examples such as Xiang attempting to warn his superiors of upcoming events and them gradually taking him seriously (or at least humoring him) with each loop.

Xiang is armed with an arsenal of melee weapons, ranging from swords to bar stools, and firearms. Combat feels fast and fluid. I wailed on enemies up close, dashed to avoid retaliation or close gaps, and unloaded bullets from afar. As a sucker for stylish action, Loopmancer is hitting the right notes. You can also use extra equipment such as proximity mines and grenades to clear mobs. If that’s not enough, Xiang sports a cybernetic arm capable of unleashing assaults such as bolts of electricity or a stream of flame. Loopmancer encourages skillful use of your moveset. Enemies hit hard and can regularly throw players off by activating damage-absorbing defensive states or executing uninterruptable attacks. Death came swiftly and often, which is why it’s good to upgrade abilities, weapons, and stats with permanent enhancements between runs.

Platforming boasts the usual features such as a double jump and a handy grapple hook to reach elevated platforms. Levels randomly change their layouts every so often to keep players on their toes, and exploration rewards hidden stashes of currency, an important resource for investing in new unlockable weapons, as well as a unique checkpoint system. Special terminals restore health but lose their potency upon completing a stage. Spending rare cores stores their healing capacity, providing another incentive to explore thoroughly and keep an eye out.

Loopmancer’s challenging combat has legs, and the Asian-influenced cyberpunk world looks exceptional (though familiar) from an artistic standpoint. The experience does feel rough around some edges, though. Resetting the loop requires a trip through your apartment and the police station. You can somewhat rush through these areas, but it feels like one-stop too many when I’m itching to leap right back into the action. Skipping through the same cutscenes irked me after a while as well. On a similar note, re-collecting lore notes is a chore, and the randomly shifting environments don’t change often enough. I went through at least three straight runs of the same level layout. The dialogue is acceptedly average in a B-movie way, though the enemy dialogue is hilariously awful. Slicing through foes results in them spouting over-the-top lines like “Tell my family!” or mundane reactions such as “He got our guy…”. It sounds more like they’re suffering a minor inconvenience than being brutally slaughtered.

Loopmancer feels like a familiar roguelite romp thus far that has some kinks to work out before it raises the curtain on its debut. The action has potential and the story’s quality depends on how creatively it uses its time-looping premise. There’s a fun game to be had here, and I hope Loopmancer can realize its potential when it launches this year for PlayStation and Xbox consoles, Switch, and PC.

Heardle Answer and Song Of The Day For Today, Saturday, April 30