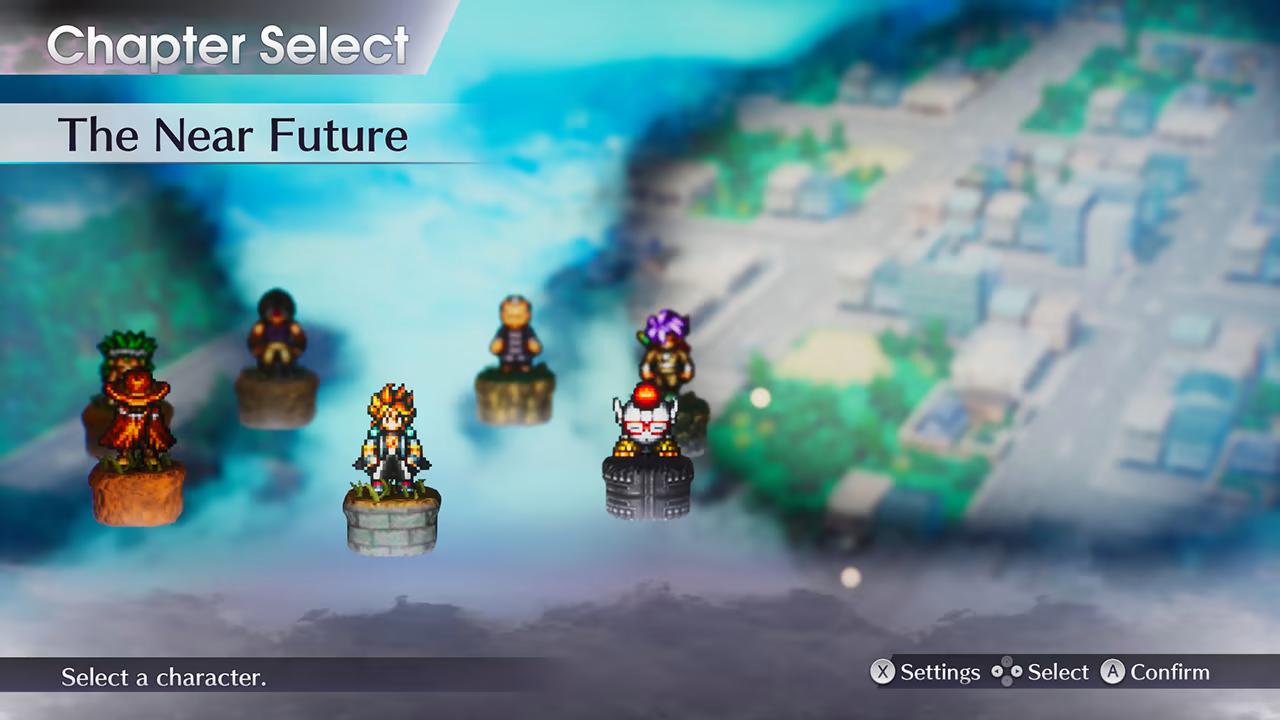 
One of my great childhood milestones was learning the level-select cheat for Sonic 2. It transformed the game from a left-to-right narrative of mounting industrial peril into an album of killer vibes. No longer would I have to sweat through Chemical Plant Zone before tasting the glories of Casino Night. No longer would I have to brave all three acts of Metropolis before taking in the view from Sky Fortress. Instead, I could put together my own playlist, dive into zones as the mood took me, and grapple a little with the effects of running order on my experience of the game. Would Chemical Plant seem quite so dreadful if it wasn’t the second level, a Mach-3 kick in the teeth after the Californian sunlight of Emerald Hill?


I’m currently reviewing the Switch remaster of Squaresoft classic Live A Live, which is essentially an RPG derived from a level-select cheat. The appropriate comparison isn’t Sonic 2, of course, but director Takashi Tokita’s later and more famous Chrono Trigger. Like Chrono, Live A Live sends you tunnelling through time, from cartoon prehistory through imperial China to a quaint far future where AI is commonplace but mobile phones are unheard of. Unlike Chrono, Live A Live doesn’t give you command of a single party following a single narrative, though its characters do eventually unite by eldritch means in the game’s final stretches. Rather, you dive into and out of each timeframe as you please using the same save file, living out different lives with specific gameplay quirks – an omnibus held together by a shared, easy-going battle system that mixes ATB bars with smallscale grid-based maps.


Each period features character design from a different artist – the ones I recognise are Yumi Tamura (Basara) and Gosho Aoyama (Detective Conan) – and each has its own bespoke mechanics, writing style and a distinct tone. The Imperial China chapter sees your wizened kung fu master taking on three wayward youths as pupils and deciding which to train up as your heir. Needless to say, there’s a legendary adversary waiting in the wings, but you’ll also spend time fetching curative herbs for townsfolk with upset stomachs. In the far future, meanwhile, a chonky robot awakens on a starship transporting a deadly creature. Here, you’ll rattle around making coffee, operating medical scanners and dealing with crewmates who regard artificial lifeforms with suspicion.


Some episodes bleed into different genres. Probably my favourite right now is the episode set in Edo-period Japan, which casts you as a ninja infiltrating a fortress, peering through spyholes and doing your best to remember a password that changes with every ring of the bell. It’s a distant ancestor of Hitman, with the option of getting through bloodlessly at the risk of being underlevelled. As with Sonic 2’s level select, the order in which you approach these scenarios shapes how you feel about the game. Start in China then bounce to the spaceship chapter, and you’re basically quantum-leaping from Ip Man into Alien.


Live A Live was originally released in 1994, but all this feels more like a response to certain present-day design questions and pressures. RPGs have become such ponderous, slothful things, though as I’ve written elsewhere, you can read their ritualistic repetitions as poetic devices. Live A Live is a welcome chance to channel-surf in search of the individual scenes or encounters that make the overarching slog worthwhile.


But it’s not just a deluge of fleeting moments. This isn’t another “Netflix of games”, much as that would have made a nifty headline: it doesn’t sprawl without cease and guzzle up your attention, building a recommendations profile so that you never have to choose. Rather, Live A Live feels more comfortable alongside today’s experimental indie anthologies, like DreadXP and the forthcoming Cartomancy collection. It’s an ornate assemblage of weird vistas you’re free to break up and reassemble to curate your understanding of the whole.

The shady Imperials are coming to Dune: Spice Wars this summer as its next playable faction

How to sacrifice and revive followers