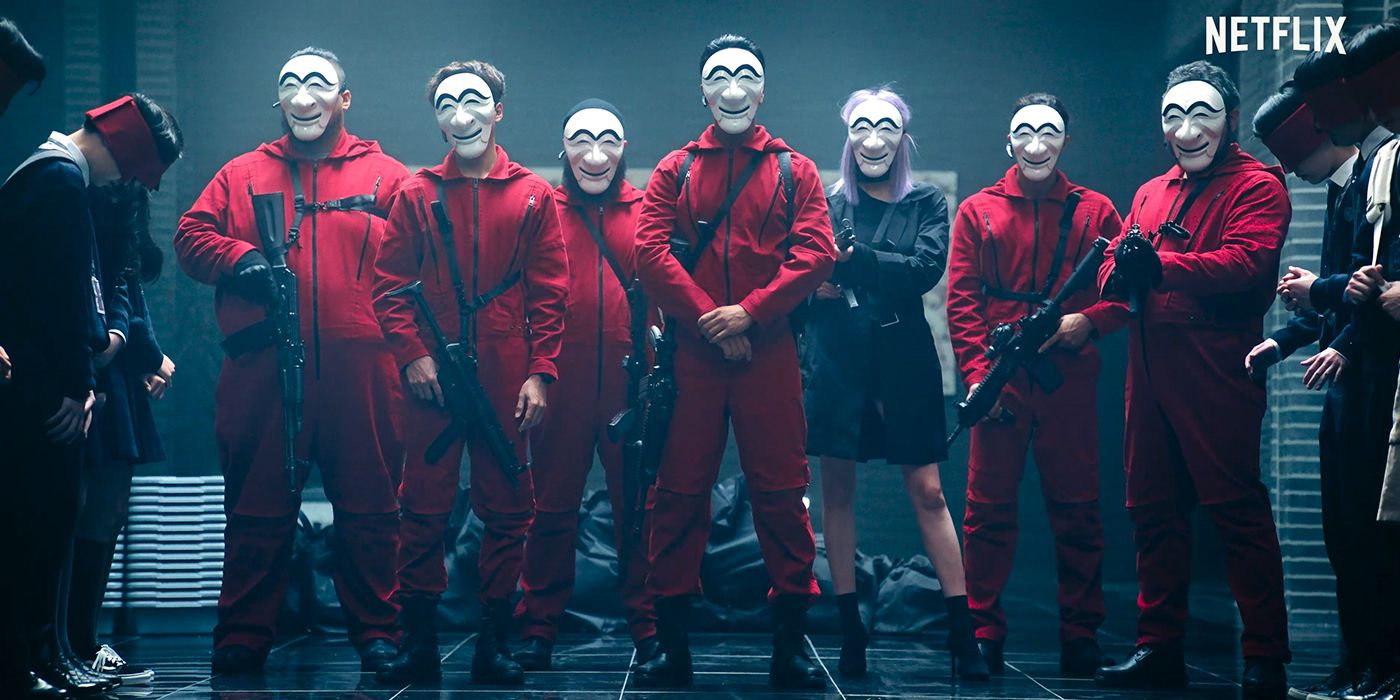 Fans looking forward to Money Heist: Korea – Joint Economic Area can expect the spinoff series to be available to stream sooner rather than later. Netflix has announced that Part 1 will premiere on June 24.

Part 1 will consist of the first six episodes of the series. Netflix also released a new poster for the series that features a white mask with a giant smile. Where the original series used a Salvador Dalí mask, the spinoff series has opted for a traditional Korean Hahoe mask. At the top of the poster, fingers can be seen holding onto the mask — under the eye on the right, a few drops of blood can be seen.

The spinoff is based on the Spanish series Money Heist, also known as La Casa de Papel. It ran on Antena 3 Television and later Netflix from 2017 to 2021. However, this version takes place in a world where the Korean Peninsula is facing reunification. The new version will star Yoo Ji-tae (as the Professor), Kim Yunjin (as Seon Woojin), Park Hae-soo (as Berlin), June Jong-seo (as Tokyo), Lee Wong-jong (as Moscow), Park Myung-hoon (as Cho Youngmin), Kim Sung-o (as Cha Moohyuk), Kim Ji-hun (as Denver), Jang Yoon-ju (as Nairobi), Lee Joobeen (as Yun Misun), Lee Hyun-woo (as Rio), Kim Ji-hoon (as Helsinki), and Lee Kyu-ho (as Oslo).

“As an actor and as a fan of the series, I want to thank the cast and crew of Money Heist for the great series they have created,” Hae-soo previously said about the series. “We are looking forward to sharing the Korean version of Money Heist with you in 2022.” The series was written by Ryu Yong-jae, Kim Hwan-chae, and Chloe Sung-jun. Kim Hong-sun directed the series’ episodes. This isn’t the only upcoming Money Heist series that Netflix has in development. In December 2021, it was announced that a spin-off series was being developed which would be focused on Berlin, played by Pedro Alonso in the original series — it is planned to premiere on Netflix in 2023.

The first six episodes of Money Heist: Korea – Joint Economic Area will premiere on Netflix on June 24. In the meantime, fans can watch the original series, which is available to stream in its entirety on Netflix. Check out the new poster down below.

Adam Luchies is a TV and Movies News Writer for Collider. He graduated from Grand Valley State University with a Bachelors Degree in Multimedia Journalism in 2020. Adam is huge fan of both DC and Marvel, as well as animation including Looney Tunes, Animaniacs, Hanna-Barbera, Disney, The Simpsons, Futurama, and Nickelodeon. He also aspires to a career in voice acting and voice-over.

This Cardcaptor Sakura Figure Will Cost Over $1250