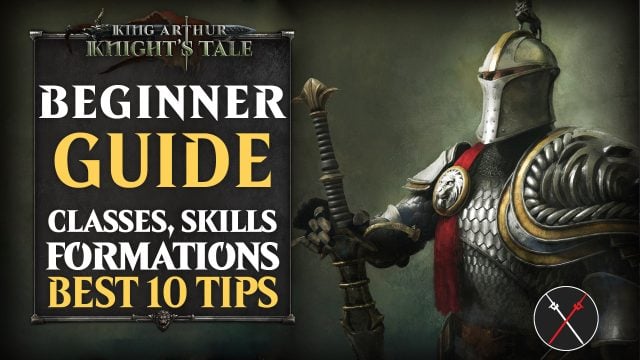 King Arthur: Knight’s Tale Beginner Guide. In this King Arthur: Knight’s Tale Beginner Guide 2022, I’m going to share with you the best tips that have worked for me to thrive and survive in combat, determine the top buildings to upgrade first in Camelot, and acquire Gold quickly. If you have just started playing the game but you are not quite sure what you ought to do and prioritize, then this Guide is for you!

Be sure to check out our King Arthur: Knight’s Tale Review to know more about our thoughts on this tactical turn-based RPG!

King Arthur: Knight’s Tale can be fairly brutal right from the very beginning. There are several mechanics that you have to understand all at once to get a strong grasp of the game. In this King Arthur: Knight’s Tale Beginner Guide, our objective is to narrow down the techniques you should focus on when it comes to Combat, Camelot upgrades, Hero Skills, and more. Let’s start with Equipment and party composition.

In King Arthur: Knight’s Tale, the moment you start a Mission, you won’t be able to change any of your gear and Consumables. Even if you loot upgraded Equipment or Healing Potions, for example, there is simply no way to equip them right away unless you go back to the overworld or Adventure Map. It is for this reason that you will have to habitually upgrade and prepare your Heroes’ Weapons, Armour, Trinkets, and Potions before diving into a Mission. 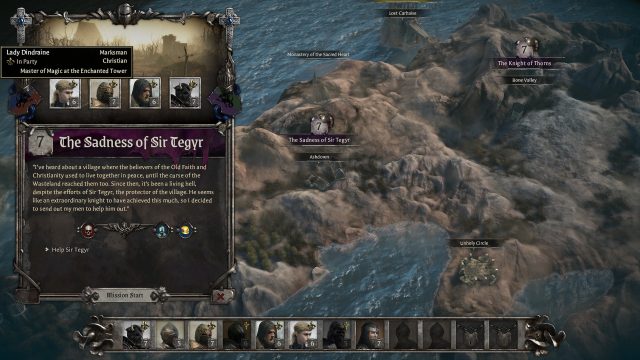 Additionally, carefully choosing your party composition is essential because it can make or break your tactics in combat. A rule of thumb would be to have 2-3 melee characters with 1 ranged Hero at all times. For the melee characters, you will always want to bring a Defender in the mix like Sir Mordred since they are effective at taking huge amounts of damage so they serve as shields for the party. Comparatively, ranged Heroes such as Lady Dindraine will be able to take out enemy archers while inflicting status effects from afar.

As you are exploring the world of Avalon, you will notice Hero formation patterns on the left-hand side of the screen. Paying attention to how your party is set up is crucial to surviving in combat, especially in cases when you get ambushed by enemies. Sometimes, you won’t have the advantage of deploying your Heroes the way you want to and so having a solid formation from the start is beneficial. 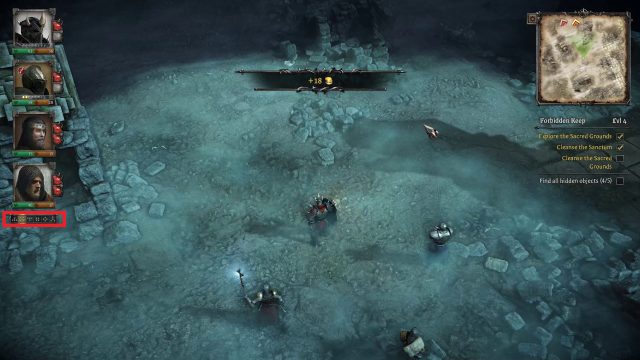 Ideally, you would want to have Defenders like Sir Mordred and Sir Pelleas stand in front of the party so they could protect them by taking damage. Marksmen and Arcanists should stay at the side or behind these melee fighters since they don’t have Armour, making them much more vulnerable to receiving Hit Point damage. Meanwhile, the other melee Heroes like Champions and Vanguards ought to also stay close to the Defenders since they are excellent damage dealers but their Armour isn’t as durable.

In connection with party formation, you need to remain vigilant when it comes to positioning your Heroes optimally in combat. At times, you can freely deploy them to specific points but you won’t always be this lucky. Both melee and ranged Heroes benefit from backstabbing enemies, which deals additional damage so try to find the best tile to move to without sacrificing too much of your Action Points (AP). You also have to consider possibly blocking the line of sight of ranged characters. Although this is very useful when Defenders act as covers, they can also become a hindrance when they fully obscure the ranged Heroes’ vision. 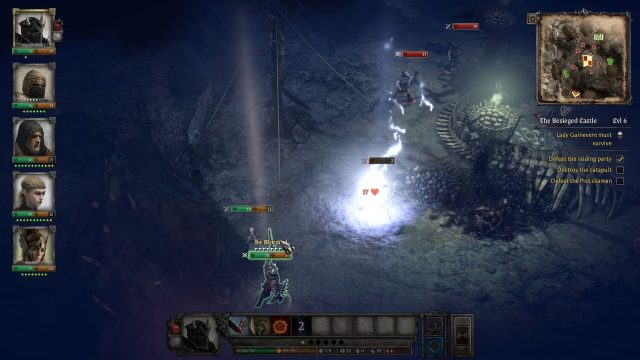 There’s also friendly fire in King Arthur: Knight’s Tale so you can accidentally take out the Armour of your comrades. The Marksman or archer can alternatively sidestep to shoot arrows but if three of your melee fighters are adjacent to each other, then this may not be enough to properly target the enemy. Moreover, placing Marksmen and Arcanists in a position where they can see a lot of enemies is ideal so they can pick them off one by one, especially the archers. Avoid shooting arrows or casting ranged Spells when an enemy is beside you because this will lower your damage by 50%.

During combat, inflicting status effects such as Burning, Poisoning, and Bleeding as well as debuffs like Vulnerability will significantly weaken the enemy over time and deal greater damage, respectively. This is very effective and it can be done both by melee and ranged Heroes so be sure to prioritize it when engaging them. Once they have been afflicted, you can then focus on the rest of the targets since they will most likely whittle away and die after a round or two. 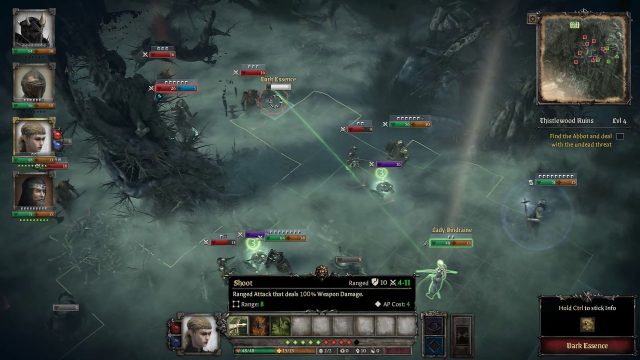 Another thing that you have to be keen on is the environment. Much like in Divinity: Original Sin 2, there are some encounters where you will notice pots known as Dark Essence laying on the ground. Be sure to hit these only when enemies are nearby since your allies can also take damage. Similarly, remember to destroy all available Bone Totems because these will spawn multiple enemies, making them difficult to deal with in the long run.

Additionally, in cases when melee fighters are preoccupied with other targets, your ranged Heroes can take cover behind structures so place them there before their AP runs out.

There are a lot of instances where depleting the enemies’ Vitality won’t instantly kill them. Instead, they will be ‘downed’ with a purple HP and timer associated with them. This means that if you don’t kill these creatures within 3 turns, they will reanimate so you will have to face them once again. Rather than unnecessarily spending your AP on killing every downed enemy, it’s important to survey the area first. 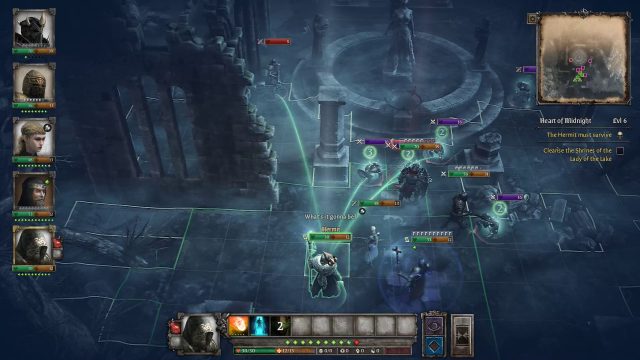 If the remaining targets are few, then you can focus on damaging them for the time being. The moment they are all on their knees, they will explode and die, thereby concluding the fight. So remember to assess whether or not it’s worth it to keep attacking downed enemies first.

After completing every Mission, you will return to the Adventure Map to manage Camelot and allocate a couple of points to your Skills. Heroes of a similar Class will not necessarily feature the same Skills. However, it’s essential to bring those that target multiple enemies in one attack like Sir Kay with his Cleave Attack or Sir Yvain with his Piercing Shot. The reason is that as you progress in King Arthur: Knight’s Tale, there will be encounters where you have to defeat a large number of enemies. 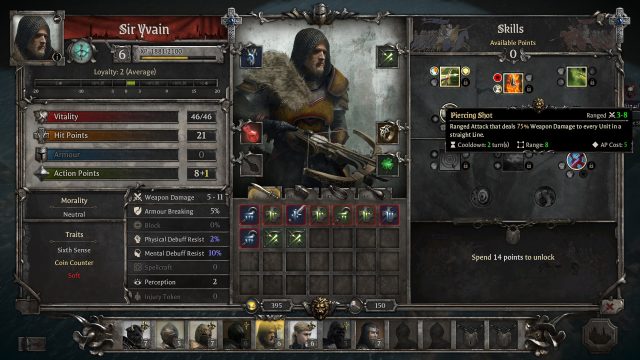 If you haven’t sufficiently leveled up your Heroes, this will be troublesome since they can get overwhelmed. As such, you want to make sure that at least 1 to 2 of them have Group Skills to inflict lethal damage, which can result in ending the fight sooner. The added bonus is if they are loyal to you, they will deal greater damage.

One of the game’s strongest points is the freedom given to players to make a lot of choices that can shift the Heroes’ Loyalty or allow them to gain additional perks. Right from the start, you will have access to the Morality Chart with quadrants to show 2 beliefs and 2 religions. This is affected by your decisions in Events as well as the Heroes you decide to recruit. It’s very important to decide where your alignment lies early on in order to unlock these benefits as soon as possible. 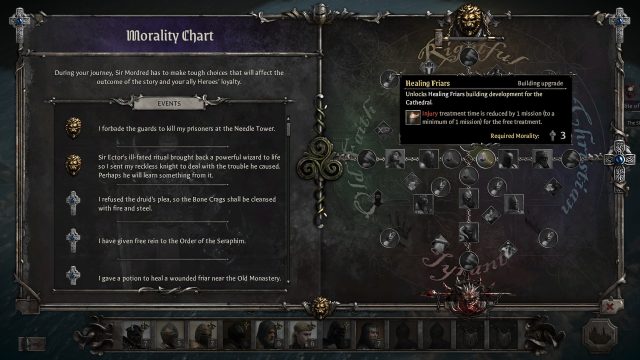 But if you keep changing your mind, you won’t progress as fast and the game will be harder to manage. Here, you will be able to unlock bonuses related to Building upgrades, new recruitable Heroes, Decrees, and Global Effects that can reduce the cost of improving Camelot. Your decision will depend on what your focus is. For instance, if you want to have a surplus stock of Gold, then becoming a Tyrannical Christian should be the objective. I find the Rightful Christian path more beneficial due to the initial Vitality and Injury treatment perks I receive together with the damage buff for all Heroes later on.

Invest in the Hospice and Cathedral First

In relation to the previous tip, I highly suggest investing in the Hospice and Cathedral first. At the beginning of King Arthur: Knight’s Tale, you will make a ton of mistakes as you navigate your way into the game and this can injure and deplete the Vitality of your Heroes. Thankfully, you have a Hospice to recover Vitality because unlike Hit Points and Armour, this Stat doesn’t automatically replenish when you go back to the Adventure Map. If you are on the same Rightful Christian path as me, then you can unlock the Medicines Perk to hasten the restoration process of the free treatment so you won’t have to shell out Gold in the future. 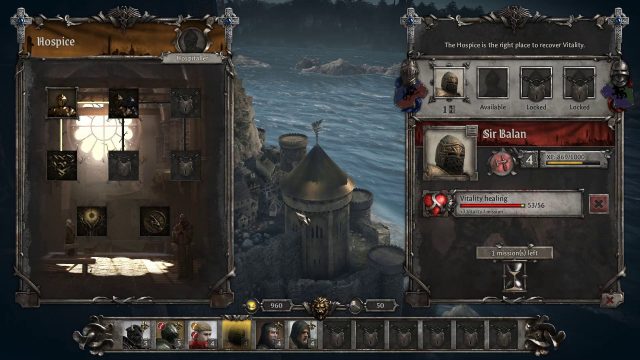 Meanwhile, the Cathedral helps remove injuries that affect the Heroes’ performance in combat. Similar to the Hospice, unlocking the Healing Friars Perk should reduce the wait time when you avail of the free treatment. For both Camelot buildings, be prepared to expand the number of available Hero slots if half or most of them have injuries or if their Vitality is low.

Level Up the Rest of the Heroes Efficiently

Progressing in King Arthur: Knight’s Tale will take a while. Since you can only bring up to 4 Heroes at a time, the alternative to effectively leveling them up is by leaving them in the Training Ground. This is an excellent and safe way for some of your newly recruited adventurers to gain experience since only the ones who go with you on Missions receive XP. Make it a point to unlock the Training Dummy Perk here as well to increase the XP they receive by 10%. For those who engage in Missions, you can unlock the Extra Progress bonus in The Round Table by unlocking the Laws tab. This will also grant them a 10% XP increase. 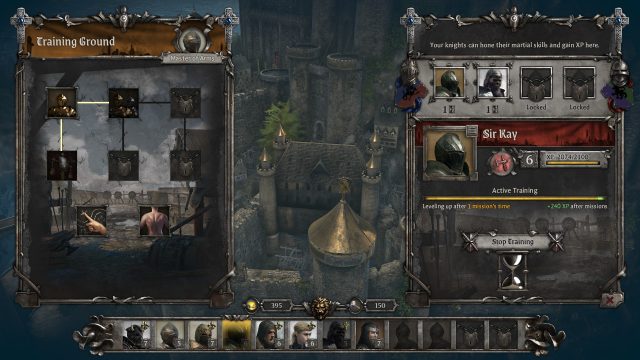 If you intend to go for the Rightful Old-Faith Alignment, then you will receive additional XP from Events. But this will take some time since it requires that you at least have 5 and 15 Rightful and Old-Faith points, respectively.

Upgrading Camelot requires Building Resources and Gold. Building Resources are acquired after completing Main and Side Missions and they can range from 300 to 500 in a single run. Gold, on the other hand, is randomly looted from chests or corpses when you are exploring Avalon. To quickly increase the Gold you have, you ought to sell unwanted pieces of Equipment to the Merchant in Camelot. This should yield a substantial amount of Gold especially if you also do all of the side objectives in the Missions themselves. 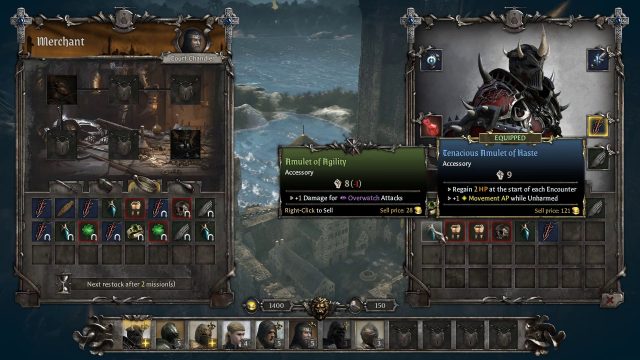 Another way to earn it quickly is by unlocking Decrees in The Round Table. Here, you will be able to acquire additional Gold using Building Resources but the catch is you will need to finish a couple of Missions before availing of the service again. And finally, with regard to the Morality Chart, there is a Gold Perk called Lordly Bounty under the Tyrant Christian path that will provide additional Gold from Missions.

The Northman Review: The Savage Viking Revenge Thriller From The Lighthouse Director Is Ferocious Excellence