I don’t know how CyberConnect2 does it. They pump out mostly-decent-at-worst brawler adaptations for just about every anime imaginable, and they do it constantly. I mean sure I’d like to get another Asura’s Wrath sprinkled in there. But a decent Demon Slayer game is fine with me.

In case you haven’t read or watched any Demon Slayer media before, the setup is a lot more palatable than you might expect. The narrative follows Tanjiro Kamado, an unlikely hero who begins a career in literal demon slaying to save his sister-turned-demon, Nezuko. The twist is that Nezuko is actually a “good demon!” and provides a lot of the comic relief of the show, which doesn’t take itself too seriously (until it does, and devastates you). The series has developed a lot of traction throughout the past few years, culminating in a massive film that blew the doors off the Japanese box office and even did well internationally.

This particular game covers the beginning of Tanjiro’s journey, into the events of the film: so you can see why the new “it” anime would be getting an adaptation. And like many CyberConnect2 projects before it, it’s a brawler with a truncated story mode and a limited versus mode. It knows what it is. What’s immediately apparent about The Hinokami Chronicles is how fantastic it looks, but that’s CyberConnect2 for you. Some scenes are ripped out of the anime directly, particularly the finisher animations, and they look incredible when they’re playing out on a PS5.

Combat is very basic (as brawlers tend to go), but easy to learn. There’s light attacks (which serves as the main dial-a-combo), dashing, a skill button (that’s basically a special attack from Smash that’s altered with directional inputs), grabs, guards (with a pushback parry command), boosts (powering up meters like DBZ), a dedicated button to pop ultimates, and a support skill button (typically tag-team assists or swaps).

Guarding/parrying and dashing around are key elements of the system, and prevent it from being a button-mash-heavy affair. While the roster is extremely limited (more on that in a moment), the characters that are present are unique enough to justify their existences, and add more diversity to the cast. Coupled with the vibrant visual style, it’s easy to feel dazzled by all of the animations and want to try new characters to see what they can bring to the table. Serviceable combat, in this case, is fine.

Story mode, which can be considered the bulk of The Hinokami Chronicles (especially if you’re going at it solo), is very similar to other CyberConnect2 games to a fault. The familiar framework still holds, in that you’ll generally get an intro cutscene, get dropped into a series of very linear paths littered with small time trash mobs, fight a boss, then get an outro scene. It’s never excruciatingly unfun, as the game looks and sounds fantastic all the while, but I really wish they either opened up the hubs a bit or just went from fight to fight without any of the fanfare.

Demon Slayer’s events are often hurried, to the point where you miss some crucial bits of character development or some meaty narrative elements. The banter, the flashy action, and the comedy are all still present, and shine through even in these spliced moments. Cleverly, and it’s like CyberConnect2 knew they couldn’t fit everything in, a lot of the story is told through flashbacks. We benefit the most from this when we’re thrusted into the story mode after Tanjiro has already trained a bit, rather than get the rote origin story treatment that’s already been told.

Bosses are the bright spots, and offer the same dramatic anime action twists the series is known for: but you get to play them out this time. Bosses often sport multiple phases/forms, coupled with voice acting that augments the battles in a big way and makes them come more alive. There are a lot of big character moments too, even with the bosses; a stark contrast to the very static and repetitive versus mode. 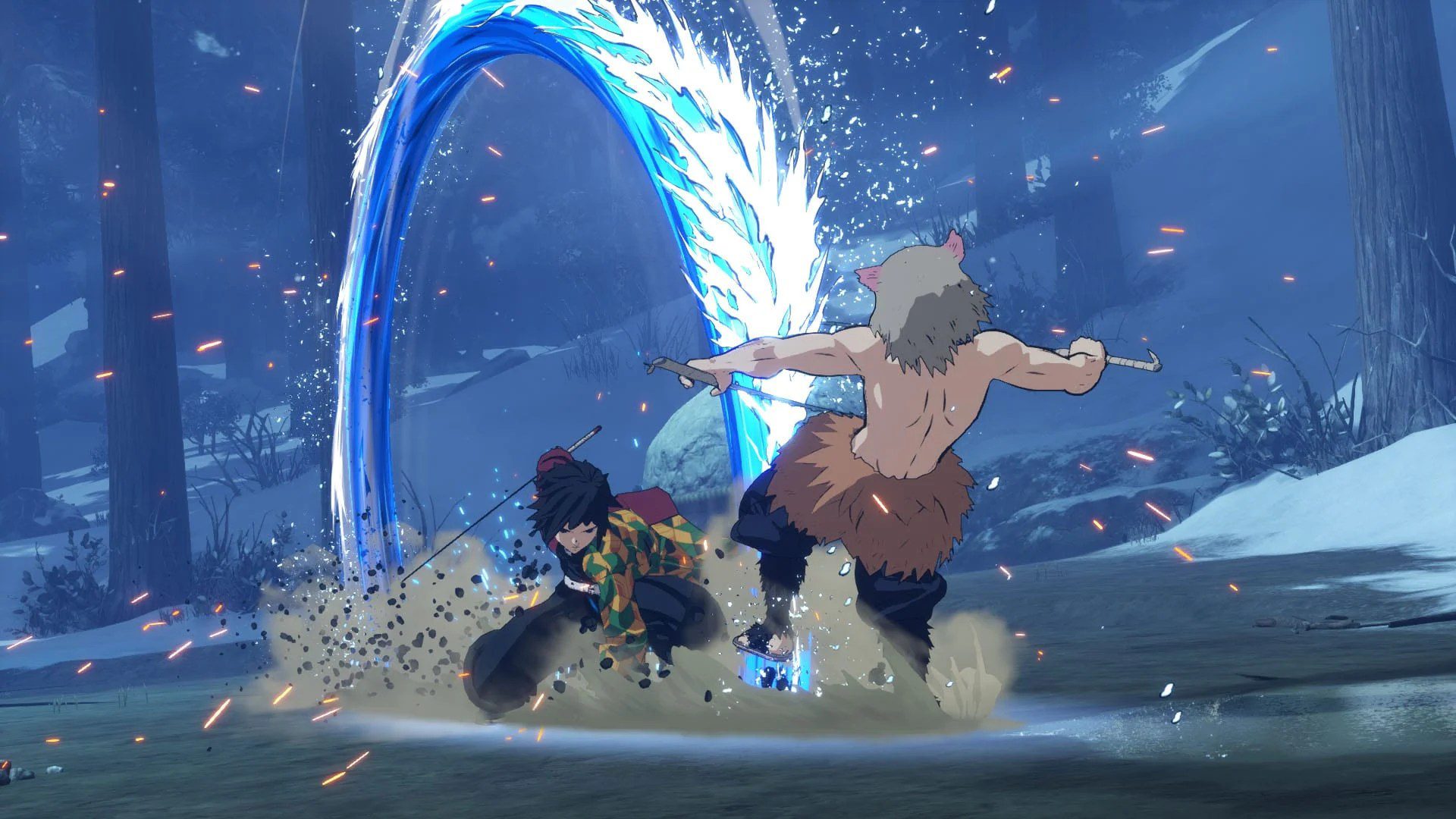 Where it starts to crumble a bit is content. So the versus mode (which features a 2v2 setup), even at the best of times with some unlocks, is very lean. A lot of the characters are actually just alternate costume versions, and in classic anime brawler/fighter fashion, there’s clones of the hero. At the moment, there are no demons to play, but they will be added “post launch.” It’s a shame they weren’t in now, because it would have made versus immensely more interesting.

Part of the issue is that versus is so intrinsically linked to story mode and the Kimetsu Points unlock system. Presented like a quasi-Fortnite-season pass, you’ll unlock points (all in-game) and buy rewards. Characters and the like are the big cash-ins (and are appropriately expensive), while little things like banners and icons are cheap. The system isn’t exciting enough to really dig through, and I found myself just wanting the character unlocks as soon as possible.

Every time I’d take a break from the campaign to try out versus mode I’d get a little bored, then head back in. The 2v2 concept is fun though, and if you have a sparring partner, you’re going to get a lot more mileage out of The Hinokami Chronicles. But 2v2 also betrays the current lack of roster choices, as there’s only so many combos to test.

Demon Slayer: Kimetsu no Yaiba – The Hinokami Chronicles is another decent brawler adaptation that sort of asks you to already have a bit of background on the source material to truly enjoy it. In that sense, it joins a very crowded space of many other anime games before it, and many of you out there know where you stand on these.

Among Us Xbox and PS4 release date: InnerSloth confirms 2021…

Forza Horizon 5 File Size is By Far the Series’ Largest,…

Splitgate’s Halloween Event Is Here, With Future Updates In…