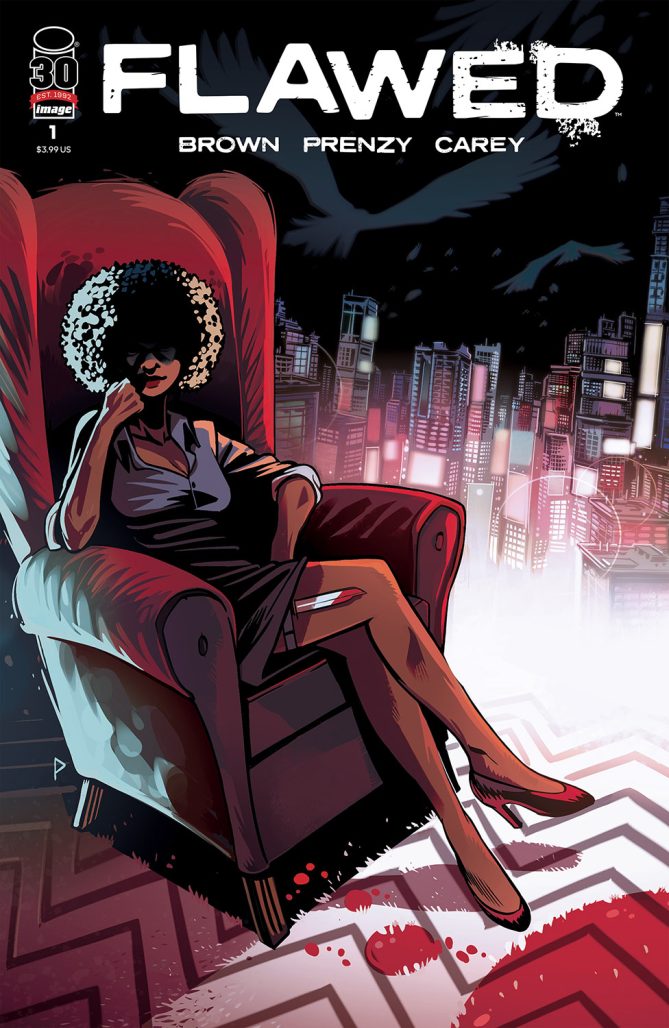 0
Share Google News FollowFacebookTwitterEmailWhatsAppReddItPinterestTelegramFacebook MessengerLinkedinTumblr
Back in 2020, Chuck Brown—co-writer of the Eisner Award winning series Bitter Root—collaborated with artist Prenzy for the self-styled “hyper-violent, hyper-stylized” comic series On the Stump from Image Comics. Today it was announced the two comic creators along with letterer Becca Carey are collaborating on another comic series entitled Flawed from Image Comics this September.

Here’s how the publisher describes the series:

Flawed follows Gem Ezz, a psychiatrist in the Kafkaesque city of Setham, where corruption and brutality rule the streets. By day, she uses words to solve her patients’ problems. By night, she takes a more direct—and sometimes deadly—approach. But when her practice puts her in the sights of an immortal serial killer, Gem finds herself embroiled in a power struggle that threatens everything she’s ever known.

“The city of Setham holds many different strange tales and Gem Ezz’s story is only the beginning” said Brown.

As Brown mentioned in an interview with The Beat back in 2019, after the incredible success of Bitter Root which he co-wrote with David F. Walker, he’s been making a name for himself solo writer with various comic projects such as The Quiet Kind and the recent Black Manta miniseries from DC Comics.

Check out the variant cover and preview art below and look for Flawed #1 to arrive in comic book shops on Wednesday, September 28,

The Very First Batman Inc From 1955, Detective Comics #215 At Auction

The CIA’s Undercover Girl in Magazine Enterprise’s Manhunt, at Auction