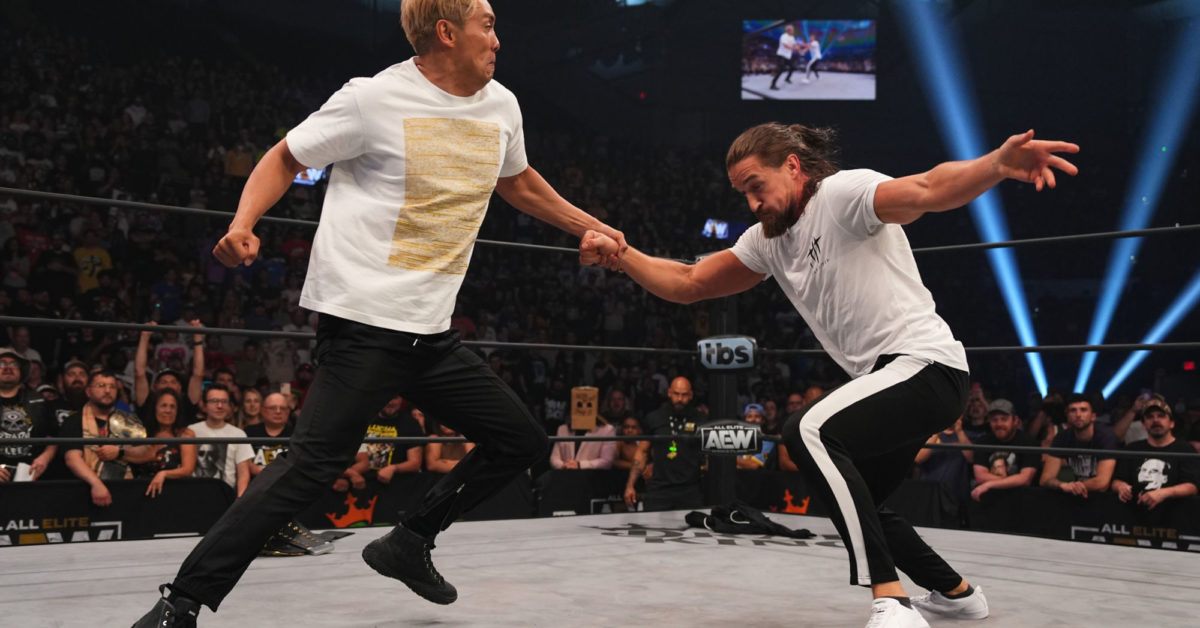 NJPW star Kazuchika Okada made his surprise AEW debut last night, coming out during a confrontation between Jay White, Adam Cole, and Hangman Adam Page to save Page from a two-on-one beatdown and insert himself into the IWGP World Heavyweight Championship match at Forbidden Door. Page defeated Silas Young on AEW Dynamite last night, but his celebration was interrupted by Cole, who was himself interrupted by White. White said that he couldn’t allow Cole to face him at Forbidden Door because Cole lost to Page twice. He also said that Cole would not get the title shot, leading to a brawl that saw Cole consider turning on his friend before joining him in the beatdown, only to see both heels run off by the Rainmaker.

Later, AEW announced that White would defend the IWGP World Heavyweight Championship at Forbidden Door in a fatal four-way match at the PPV, which The Chadster finds to be just so unfair to WWE. WWE has to compete against AEW with only their own top stars, but AEW gets to use their top stars, WWE’s top stars who WWE fired, and now NJPW’s top stars too! This is a slap in the face to Vince McMahon, who is going through some stuff right now, and The Chadster is extremely cheesed off about it.

It’s also unfair to add yet another match of this caliber to Forbidden Door, which already features two wrestling companies, AEW and NJPW, teaming up to bully WWE with a joint PPV. Auughh man! So unfair! In addition to Zack Sabre Jr. vs a Mystery Opponent, Forbidden Door features a stacked lineup of AEW, NJPW, and even ROH stars. Jon Moxley will face Hiroshi Tanahashi to crown the Interim AEW World Champion. In a fatal four-way, Jay White will defend the IWGP World Heavyweight Championship against Hangman Page, Adam Cole, and Kazuchicka Okada. Thunder Rosa will defend the AEW Women’s World Championship against Tony Storm. FTR, United Empire, and Roppongi Vice will face off in a triple threat for both the ROH World Tag Team Championships and the IWGP Tag Team Championships. And Will Ospreay will defend the IWGP United States Championship against Orange Cassidy. The Chadster can already feel himself becoming even more sexually impotent just looking at this lineup.

In non-title action at Forbidden Door, Zack Sabre Jr. will take on a mystery opponent of Bryan Danielson’s choosing, who will be someone making their AEW debut. Chris Jericho will team with Minoru Suzuki and Sammy Guevara to take on Eddie Kingston, Wheeler Yuta, and Shota Umino. The Young Bucks have rejoined Bullet Club for one night only to team with El Phantasmo, and Hikuleo to face Darby Allin, Sting, Shingo Takagi, and Hiromu Takahashi, who are going by the deep cut name of Dudes with Attitude. There will also be another match announced on AEW Rampage on Friday. And on the Buy-In preshow, Max Caster and the Gunn Club will face The DKC, Kevin Knight, Alex Coughlin, and Yuya Uemura. The Chadster is literally beside himself at how many exciting matches are on this card, showing that Tony Khan and the country of Japan have absolutely zero respect for the wrestling business and everything Vince McMahon has done for it.

Forbidden Door will take place on Sunday, June 26th at the United Center in Chicago and will stream on Bleacher Report, Fite TV, and NJPW World, as well as on traditional PPV services. If you care about The Chadster’s mental health at all, you won’t watch it.

Into the Breach expansion, iOS and Android versions get release dates