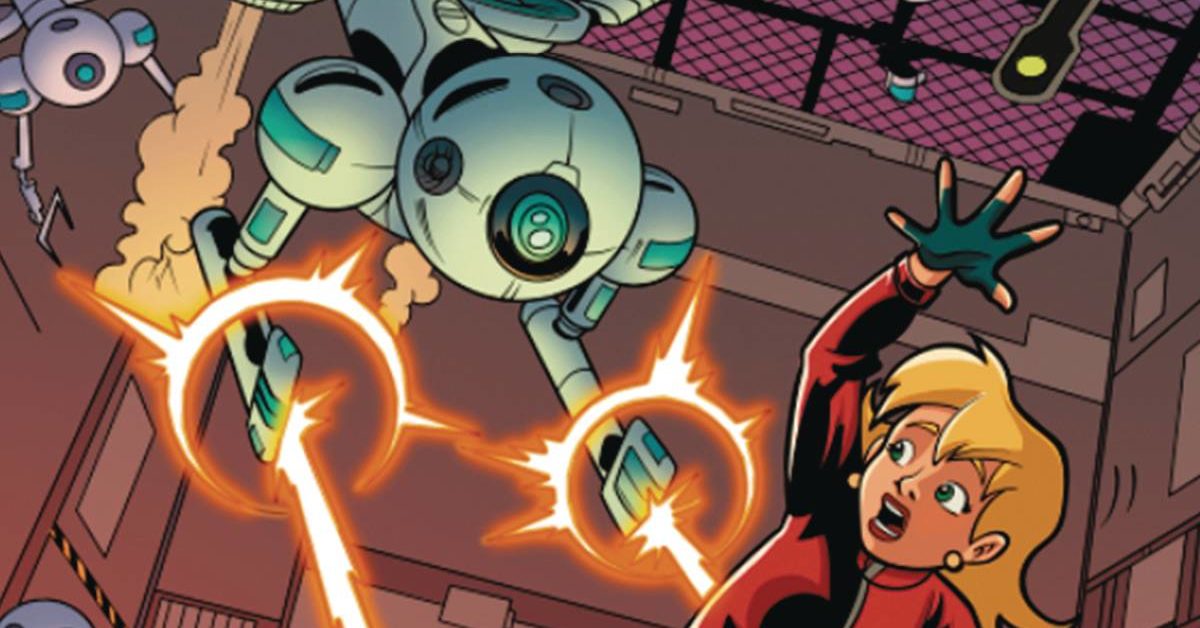 Scout Comics is publishing both Junction Jones and Impossible Jones simultaneously in their February 2023 solicits and solicitations. Will they get the license for Indiana Jones to complete the set? Here’s the whole run down for the publisher… notably nothing from their Black Caravan imprint for February, though. Has there been a parting of ways?

JUNCTION JONES #1
SCOUT COMICS
DEC221636
(W) TC Pescatore (A / CA) Luciano Cruzado
In the derelict slums of the multidimensional town of Junction, Mister Nibs and Junction Jones scour the dangerous alleyways in search of illicit organic material to sell off at the local black market chopshops and transmutation garages, until an anonymous tip leads them to the remains of a murdered Earth hobo. The evidence they uncover on the body points to a vast government cover-up, a conspiracy of which they’re now inexplicably at the center. Their first instinct? Run and hide! But a suspicious maintenance team that just so happens to arrive at the same time, looking for the same body, may hamper that. In the ensuing stand-off Jones decides the best option may be a joke; will it fall flat or land?
In Shops: Feb 22, 2023 SRP: 4.99

IMPOSSIBLE JONES ONESHOT CVR A HAHN KESEL CODY
IMPOSSIBLE JONES ONESHOT CVR B 10 COPY UNLOCK HAHN
SCOUT COMICS
DEC221634
(W) Karl Kesel (CA) Karl Kesel (A / CA) David Hahn
Impossible Jones (a thief pretending to be a hero) and Holly Daze (a former hero, now a thief) join up for a Girls’ Night Out of drinking, dancing… and danger! With Holly’s ex, Krampus, lurking in the shadows, Imp learns that sometimes the only thing harder than being enemies-is being friends! Added bonus: first glimpse into the secret Dark Files being kept on Impossible Jones and other crime-fighters and criminals in New Hope City!
In Shops: Feb 15, 2023 SRP: 4.99 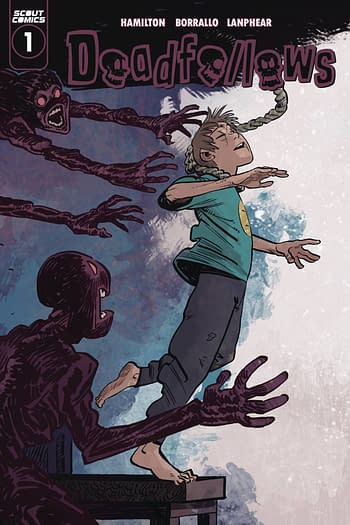 DEADFELLOWS #1
SCOUT COMICS
DEC221631
(W) Kody Hamilton (A / CA) Ramiro Borallo
Nonstop Title! Pete Miller has just gotten out of his two-year relationship, reeling from the chaos of it all without friends or family around. As he moves into his new awful, one-bedroom apartment Pete attempts to take his own life, but is stopped by a benevolent ghost. Moved by the kindness of this supernatural stranger, Pete sets out to bond with this ghost at all costs-but he quickly learns he doesn’t understand the paranormal or their intentions.
In Shops: Feb 22, 2023 SRP: 4.99

BANSHEES #1 (OF 5) CVR A TIM DANIEL
SCOUT COMICS
DEC221626
DEC221627 – BANSHEES #1 (OF 5) CVR B 10 COPY UNLOCK SOOK – 4.99
(W) Dave Dwonch, Jessica Balboni (A) Riccardo Facinni (CA) Tim Daniel
Emily is entering her first year of college and looking to reinvent herself after the loss of her best friend. But when she discovers the terrible history of her dormitory, she channels her guilt into a new obsession: discovering the truth about The Lion, a serial killer that stalked her college campus for nearly a decade. But old ghosts can lay dormant for only so long… In Shops: Feb 01, 2023 SRP: 4.99 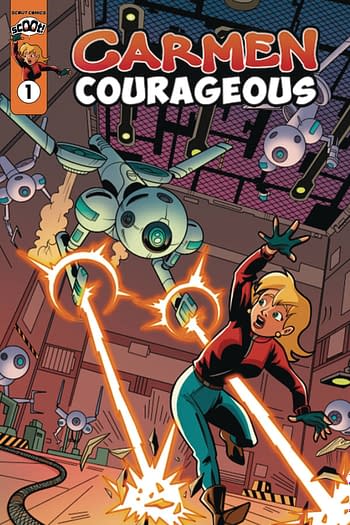 ADVENTURES OF CARMEN COURAGEOUS #1
SCOUT COMICS – SCOOT
DEC221645
(W) Rob MacKinnon (A) Ken Davis, Jao Canola (CA) Davis & Canola
Nonstop Title! Carmen is a plucky private eye with a taste for trouble who is always on the lookout for a new case. In this action-packed first issue, Carmen tracks down a missing businessman and inadvertently uncovers a conspiracy by the evil Mr. Risk and his gang of creepy crooks! In Shops: Feb 15, 2023 SRP: 2.99

AND WE LOVE YOU CVR A ANGELA WU
AND WE LOVE YOU CVR B 10 COPY UNLOCK PATRIDGE
SCOUT COMICS
DEC221624
(W) Fell Hound (A) Fell Hound (CA) Angela Wu
In the throes of a violent dystopian war, a young soldier perishes on the battlefield and begins to bleed out all her memories. Mixing heart wrenching emotions with stunningly gripping visuals, this is the tale of one woman’s life, death, and the love which transcends both. A brand new epic from the world of the Ringo-nominated Commander Rao! In Shops: Feb 01, 2023 SRP: 9.99 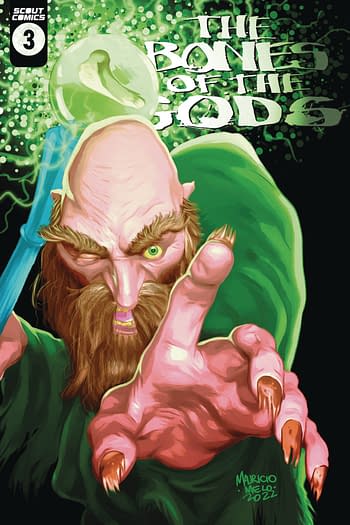 BONES OF THE GODS #3 (OF 6)
SCOUT COMICS
DEC221628
(W) Brenden Deneen (A / CA) Mauricio Melo
New York Times-bestselling author Brendan Deneen continues to weave his captivating tale of mortals daring to seek the power of the gods. The beautiful artwork of Mauricio Melo brings life to this epic.
In Shops: Feb 08, 2023 SRP: 4.99 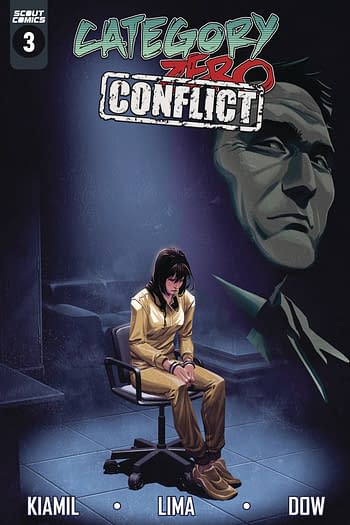 CATEGORY ZERO CONFLICT #3 (OF 5)
SCOUT COMICS
DEC221629
(W) Adem Kiamil (A / CA) Ton Lima
Megan confronts her Dad and learns of her sister’s death at the hands of a mysterious One Percenter. Neve along with the others escape the Omega facility and make it to the docks where they run into a surprise from their past, and the Eden escapees are all finally reunited after parting ways whilst on the run from Sanaxus.
In Shops: Feb 01, 2023 SRP: 4.99 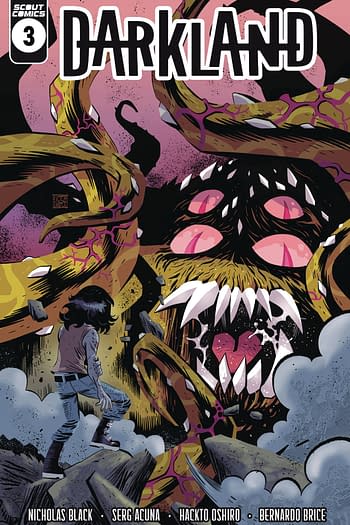 DARKLAND #3 (OF 4)
SCOUT COMICS
DEC221630
(W) Nicholas Black (A) Serg Acuna (CA) Victor Santos
Rose faces off against new enemies in a desperate fight for her life. Zed is presented with an unusual business arrangement. One of the last surviving Chroniclers makes a terrifying discovery.
In Shops: Feb 08, 2023 SRP: 4.99 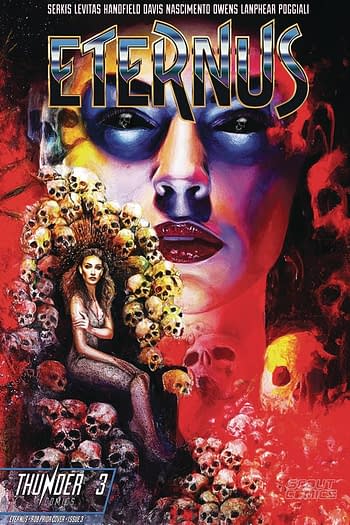 ETERNUS #3 (RES)
SCOUT COMICS
DEC221632
(W) Don Handfield, Anastazja Davis (A) Karl Moline, Andy Owens (CA) Rob Prior
Heracles and Mina learn the Hunter Orion may have murdered Zeus and try to stop him from getting his hands on the Thunderbolt of Zeus. Dionysus strikes a dark bargain to save Julian and his army from certain death in Gaul, moving the new Caesar one step closer to an alliance with the old Gods.
In Shops: Feb 15, 2023 SRP: 5.99 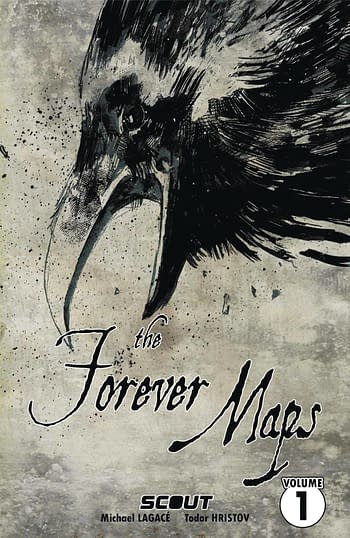 FOREVER MAPS GN NEW PTG
SCOUT COMICS
DEC221633
(W) Michael Lagace (A) Todor Hristov
In 1794, a young man named John is given a map. Curious, he follows it, and when he arrives at the end, he finds a similar map. This leads him to another, and then another, and on and on. Determined to find something, anything, else, he continues to follow these strange maps all over the country. Decades later, he learns that as long as he follows them, he doesn’t seem to get older… and it’s not until nearly a century later that he realizes when he stops, time begins to catch up with him. Torn between family and immortality, John must continually choose between living forever and having a life worth living. In Shops: Feb 08, 2023 SRP: 14.99

KILLCHELLA #3 (OF 4) CVR A ACUNA
SCOUT COMICS
DEC221637
DEC221638 – KILLCHELLA #3 (OF 4) CVR B 10 COPY UNLOCK VECCHIO – 4.99
(W) Mario Candelaria (A) Lautaro Havlovich (CA) Serg Acuna
What should’ve been the festival weekend of a lifetime has now turned into a nightmare as Blaire and her friends find themselves in the middle of a massacre orchestrated by crazed popstar Topanga Cornell and her most psychotic fans who will do anything #ForHerLove.
In Shops: Feb 08, 2023
SRP: 4.99 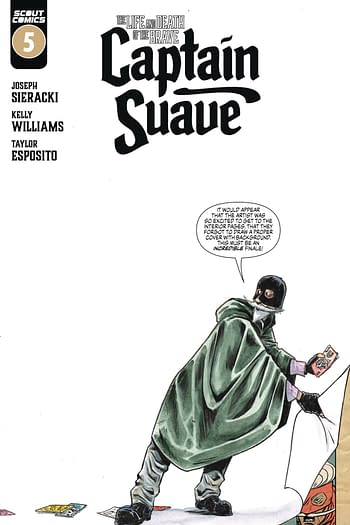 LIFE AND DEATH OF THE BRAVE CAPTAIN SUAVE #5
SCOUT COMICS
DEC221639
(W) Joseph Sieracki (A / CA) Kelly Williams
The epic tale of Captain Suave and his beloved sidekick Champ comes to its climatic conclusion in an issue crammed with contention, chaos, and calamity! To be sure, ours is no ordinary inner city idealist! Yet even the most stalwart superhero sometimes requires the assistance of additional aides and associates-will Cleveland’s Champion conquer… or crumble?!
In Shops: Feb 08, 2023
SRP: 4.99 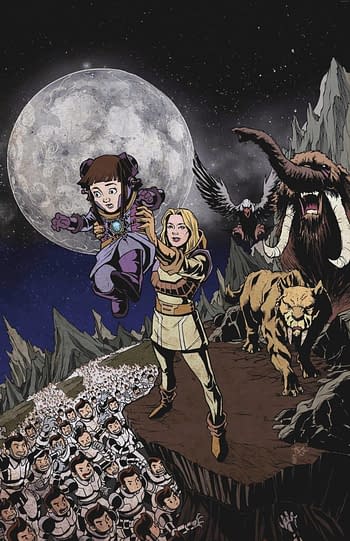 LUNAR LADIES TP
SCOUT COMICS
DEC221640
(W) Omar Morales (A) Joel Cotejar (CA) Paula Goulart
A million years ago, in outer space, a highly-advanced society of women lives under the surface of the moon. Their peaceful way of living is quietly fracturing from the inside, as political ideologies pit the queen of the moon against a geneticist hell bent on usurping the queen’s power. The Lunar Ladies is an homage to the public domain character, Moon Girl, complete with Golden Age ray guns and laser rays. Pew-pew! Fans of Buck Rogers and The Rocketeer are sure to enjoy an old-fashioned, sci-fi adventure with the Lunar Ladies. Collecting issues 1-3.
In Shops: Feb 15, 2023
SRP: 14.99

OSWALD & STAR CHASER #1 (OF 6) CVR A TOM HOSKISSON
SCOUT COMICS
DEC221641
DEC221642 – OSWALD & STAR CHASER #1 (OF 6) CVR B 10 COPY UNLOCK CARDOSEL – 4.99
(W) Tommy Kulik, Tyler Villano Maron (A / CA) Tom Hoskisson
Torn from his training after King FEK usurped the throne, space knight Oswald Bretters embarks on a quest to save the Star Lands! As headstrong as he is, even Oswald knows he can’t restore his fallen kingdom alone, so he searches for his childhood heroes to bolster his ranks. With the watchful eye of King FEK omnipresent, Oswald luckily runs into all-star help! The mysterious mercenary Star-Chaser joins his cause, but can she really be trusted!? It all starts here-the adventure of a lifetime-at the edge of space!
In Shops: Feb 08, 2023
SRP: 4.99 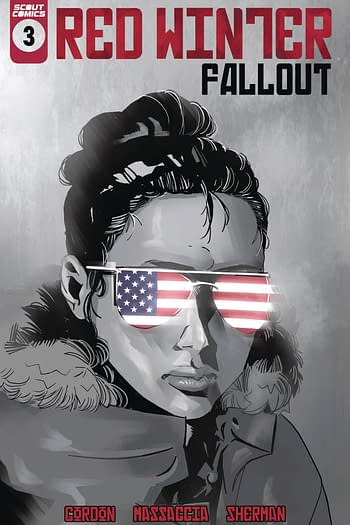 RED WINTER FALLOUT #3 (OF 4)
SCOUT COMICS
DEC221643
(W) Michael Gordon (A / CA) Alberto Massaggia
All hell breaks loose as Joseph and Darya find themselves in a deadly gunfight with the Chistyye Krovi. Who will survive and what will be left of them?! Meanwhile, Max Voronin closes in on what’s really going on in Kapotnya, even while the mysterious Aria Bellucci goes to extreme lengths to keep him away from the truth. Oh, and the connection between Darya and Joseph’s father, the late Eli Winter, is revealed at last!
In Shops: Feb 01, 2023
SRP: 4.99 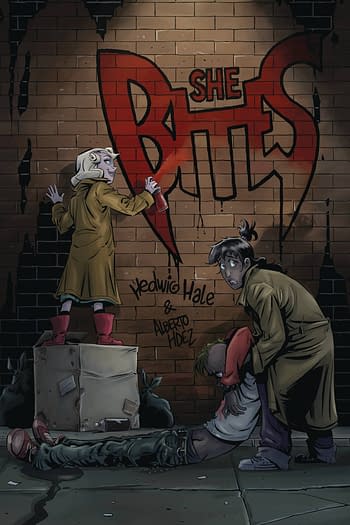 SHE BITES TP VOL 01
SCOUT COMICS
DEC221644
(W) Hedwig Hale (A / CA) Alberto Hernandez R.
Pittsburgh, 1997. A 134-year-old vampire stuck in her forever 9-year-old little girl body is squatting in a basement apartment she stole from a local pedophile who made the mistake of trying to take her home. This is Elsie Baker, and she’s sick and tired of stupid adults treating her like a lost little kid. To get out of the house without being hassled, she hires a babysitter to be her chaperone. Enter Brenda Zielinski, a suicidal teenager searching for some quick cash so she can end things in style: buy a one-way ticket to Scotland to jump off a cliff. Despite the generous payday, it turns out that babysitting a vampire might be more trouble than it’s worth.
In Shops: Feb 22, 2023
SRP: 14.99

Expect Another Paper Drought For Comics In 2023?