John Leguizamo Speaks Out Against Mario Movie For Lack Of Diversity 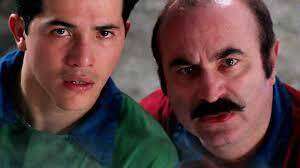 The 1993 Super Mario Bros. movie might not have been a commercial success at the time, but eventually became a cult classic. Pulling in Wizard of Oz and Ghostbuster-style aesthetics, the movie was a loose adaptation of the video game and is still the only live-action feature film with these characters.

Actor John Leguizamo, who played Luigi in the film opposite Bob Hoskins’ Mario, told IndieWire at that casting the voices of Chris Pratt and Charlie Day as the Mario Bros feels “going backwards.” The animated movie caused a stir with Pratt’s involvement after the first teaser was released, with most fans citing there’s no element of the character showing through. Leguizamo critiques that the casting of the brothers doesn’t include a person of color.

“I’m O.G. A lot of people love the original. I did Comic-Con in New York and in Baltimore, and everyone’s like, ‘No, no, we love the old one, the original’,” Leguizamo said, during the premiere of The Menu. “They’re not feeling the new one. I’m not bitter. It’s unfortunate.”

Leguizamo explained that both directors Annabel Jankel and Rocky Morton had to fight for him to be the lead because of his ethnicity and not exactly what the studio was looking for. “I was a Latin man, and [the studio] didn’t want me to be the lead. They fought really hard, and it was such a breakthrough. For them to go backwards and not cast another [actor of color] kind of sucks.”

The voice cast of the upcoming movie features several prominent actors of color including Keegan Michael-Key as Toad, Fred Armisen as Cranky Kong, Khary Payton as the Penguin King, Kevin Michael Richardson as the wizard Kamek, and Eric Bauza in an unrevealed role.

The Super Mario Bros Movie from Illumination is expected to hit theaters April 7, 2023.