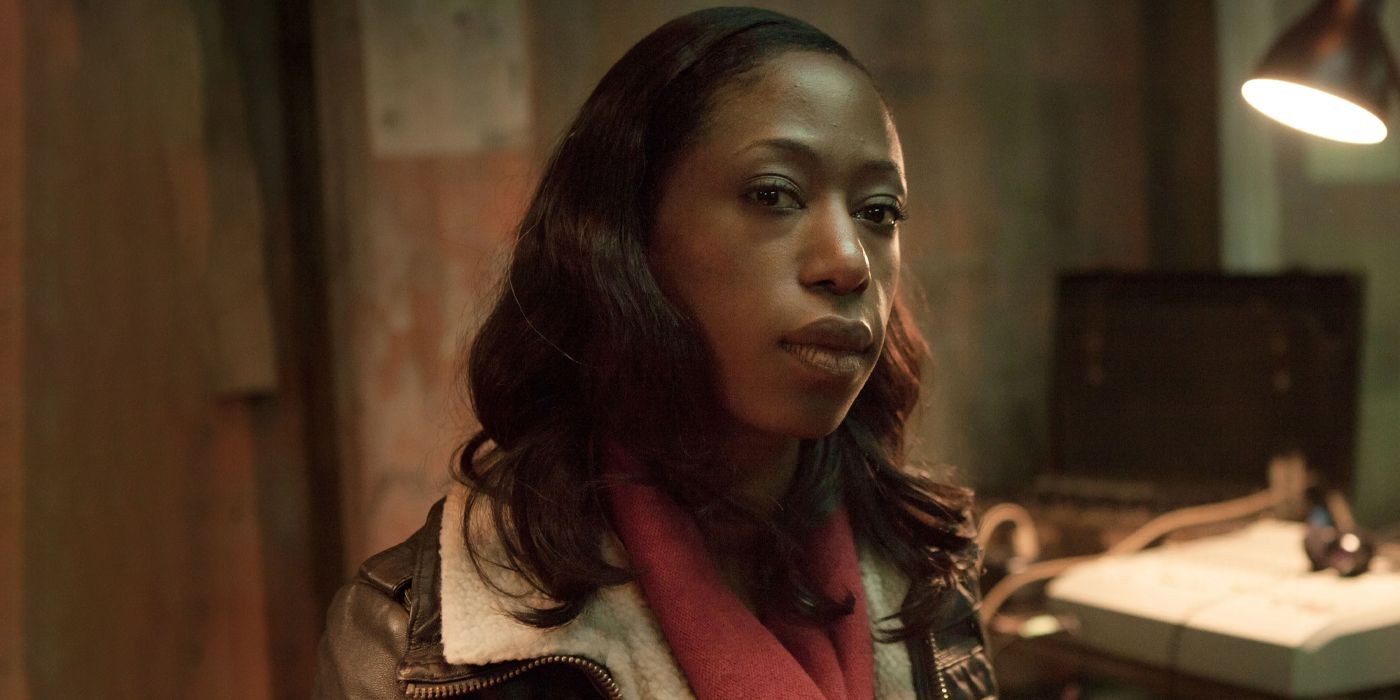 The first images for the upcoming thriller Jericho Ridge starring Nikki Amuka-Bird have been revealed, teasing a deadly battle for survival.

The new images are provided by Variety, who shared a pair of images that feature weapons be brandished by both Amuka-Bird as well as one of her co-stars, Michael Socha (This is England). Jericho Ridge follows North Washington County sheriff Tabby (Amuka-Bird). One night, she is stationed at the sheriff’s office all by herself while the rest of the precinct is out on patrol. She eventually learns that the officers on patrol have a setup by a murderous drug cartel, while the office becomes the target of an attack at the office. Now, she must battle desperately to save herself as well as her son.

The new images show this desperation with the first one being of Amuka-Bird, decked out in her sheriff uniform with a gun aiming at something just off-screen. The second image is of Socha’s character Earl Macready a redneck criminal, also attacking an unknown entity just out of shot. Previous acting credits for Amuka-Bird include roles in films like Jupiter Ascending and Old. She most recently finished up on her part in the adaptation of Jane Austen‘s Persuasion alongside Dakota Johnson. It was also announced back in February that Amuka-Bird will be joining Rupert Grint in M. Night Shyamalan‘s next film, Knock at the Cabin. Jericho Ridge is still currently filming, with the shoot happening in Kosovo.

A Lonely Place to Die director Will Gilbey is returning to the director’s chair for Jericho Ridge and sees Ruairi O’Brien (Line of Duty, Vigil) serving as the director of photography. In addition to Amuka-Bird and Socha, Solly McLeod (Boxing Day) will also co-star as a cop. The film is co-financed by Silver Lining Productions and DLNQNT, with Alex Tate and Harvey Ascott producing via DLNQNT alongside Besnik Krapi. Mark O’Sullivan and Richard Caleel serve as executive producers for In Plain Sight Group. Speaking to Variety, Gilby described the atmosphere of the upcoming thriller, praising Amuak-Bird for her work on the project.

‘Jericho Ridge’ is a claustrophobic, action-packed, thriller viewed through the lens of a failing relationship between a mother and errant teenage son. Nikki Amuka-Bird, playing the lead role of sheriff’s deputy Tabby Temple was a genuine revelation. She arrived in Kosovo with a deep understanding of and connection to her character that I’d never dreamed would be possible. Her commitment to the role and her unwavering enthusiasm and energy in the face of an extremely physically demanding shoot was nothing short of incredible. I’m still in awe of the whole cast, and the mostly local crew, who endured temperatures reaching -16 Celsius [3.2 Fahrenheit] without batting so much as an eyelid. I will always be grateful to their unswerving commitment to this film, which explores themes of trust, parenthood, and isolation. It’s an exciting time to be making genre films. Audiences are clamoring for original, passionate filmmaking. Jericho Ridge hooks you in and doesn’t let go. There’s no respite for these characters, no easy choices; just ninety minutes of breathless, adrenaline-pumping cinema.

Jericho Ridge does not yet have an announced release date, though it is currently expected to release in 2022. Check out the image of Socha below:

Gran Turismo 7 Review – Back On Track