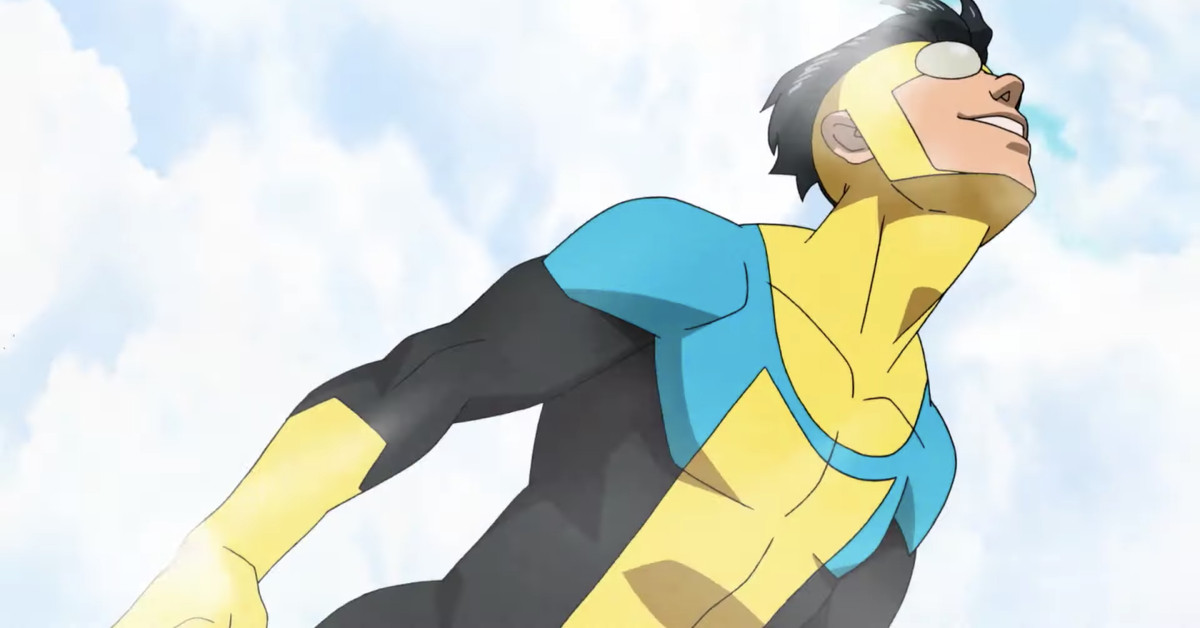 When Robert Kirkman started writing Invincible, he didn’t know if his original superhero concept would last five issues. 20 years later, his 15-year run on Invincible with artists Cory Walker and Ryan Ottley stands as one of the great accomplishments in modern superhero comics, and has spawned a critically acclaimed and massively popular animated adaptation on Amazon.

The formation of Image Comics in 1992 ushered in a wave of new independent superheroes created by former Marvel superstars, but those comics were firmly rooted in the excessive, extreme storytelling and aesthetics of the era. When Invincible debuted 11 years later, it held on to some of those more bombastic impulses, particularly when it came to violence on the page, but it also brought more nuanced character relationships as it explored the dynamics of the doomed Grayson family.

As the titular teen superhero, Mark Grayson was on an exciting journey of discovery that took readers through a sprawling new superhero universe. But that journey also meant learning and facing the truth about his father, Omni-Man, a Superman analog posing as a hero but who is actually a mass-murdering galactic conqueror preparing Earth for an alien invasion. The stories became increasingly brutal, but it hurt Kirkman as much as it hurt readers to see these characters pushed to their painful limits.

“There’s a lot of stuff that was very emotional for me as a writer,” said Kirkman. “There’s definitely some difficulty around there, but the writers of everything that anyone enjoys are always feeling the emotions that they’re trying to get out of their readers, or viewers, or whatever, while they’re writing the stories. Anytime something is sad or devastating, there’s certainly a level of that that you feel as a writer, and if you’re able to channel that into the story, I think that’s what makes the story good.”

That devastation was impeccably depicted on the page by Kirkman’s artistic collaborators, and Kirkman recognizes that Invincible wouldn’t be what it is without them. “Invincible is everything I loved about superheroes written down and seen through the filter of Cory Walker and Ryan Ottley,” said Kirkman. “And the filter of Cory Walker and Ryan Ottley is brilliant. Cory is one of the greatest character designers that ever worked in comics. I think that his visual concepts are unique. They’re clean, they’re exciting, they’re amazing. And that’s one of the reasons that he’s the perfect guy to be handling that aspect of it on the show.”

After drawing the first seven issues, Walker passed on art duties to Ryan Ottley, who would draw most of the series while welcoming Walker back for the occasional guest stint. “Ryan Ottley is one of the best fight scene artists in comics,” said Kirkman. “He gets action. He loves action. The way that we were crafting the stories, and trying to show these epic conflicts between characters that can push buildings over and break school buses over their knee.”

“To be able to actually illustrate that is another thing entirely. And that was something that Ryan was always willing to roll his sleeves up and do. He put so much blood, sweat, and tears into this book over the 15, 16 years that we were working on it. I would come up with insane scenarios with crazy detail, and he’d be like, ‘Yeah, OK, gonna do this now,’ and to have it come out as regularly as it did is crazy.”

Maintaining a feeling of constant escalation proved to be the most challenging aspect of writing Invincible for Kirkman, but he found ways to move from event to event without losing momentum. “Managing expectations — as the series progressed, that became something that I think I got pretty good at by the end,” said Kirkman. “Using each piece of every storyline to prime the reader into preparing for if it was going to be an upturn or a downturn. And making sure that every new villain and every big fight in some way tops the one previously.”

“It was definitely something that we were pushing ourselves into a corner we were never going to get out of if we had kept the series going much longer. You can’t have two people swinging suns into each other. Although, now that I say that…”

When it came to wrapping up the comic in 2018, Kirkman initially imagined an ending as a creative experiment, compelling him to drive the story to a hypothetical finale without really committing to it as the formal conclusion. That changed around issue 100, when an ending started to feel like a necessary part of the book’s concept.

“Invincible was always about playing against type, taking all the tropes from the decades and decades of Marvel and DC books and subverting them in an interesting way,” said Kirkman. “And so for the entirety of the series, we ultimately subvert what superhero comics are. Superhero comics usually never end. They evolve, and creative teams change, and they just keep going and going and going and going, and so to have Invincible be a book that has a beginning, middle, and an end got very exciting for me and Cory and Ryan.”

Between Invincible and The Walking Dead, Kirkman has a reputation for gruesome violence in his stories, and for better or worse, it helps him get a visceral response from his audience. “I look at [violence] like it’s one of the tools in the toolbox. It’s all about turning dials. It’s all about trying to figure out what’s going to get the reaction you want for a given scene, what’s going to make the audience feel the way that you want them to feel. It’s certainly a tool that I go to often in almost everything that I do. You could almost say it’s a crutch. I’m willing to admit that, but I think it’s probably the best tool to get somebody to recognize the gravity of the situation. To visually represent the stakes.

“It’s something that I think is absolutely essential, especially in the world of Invincible,” said Kirkman. “For Invincible, it’s a representation of realism. This is an animated series, this is a superhero world; how do you make these stakes feel real to an audience? Well, you show them horrifically graphic images that illustrate how dire these situations are! How vulnerable the civilians in these worlds are, where superheroes are crashing through buildings and decimating landscapes. Some superhero stories collapse entire cities and you feel nothing. The goal with Invincible was to collapse one building and make you really sad for the people that were there. You’re feeling bad about Mark having to face his father.”

Kirkman applauds Amazon for letting them bring the same level of heightened violence to the animated series, and it makes sense that Invincible is arguably the most accurate adaptation of a superhero comic: The comic creators work on the show. Kirkman was a writer and executive producer on season 1, and he’s the co-showrunner for season 2. Walker was the lead character designer for season 1 and assumes a producer role in season 2, now overseeing an entire team of designers. Ottley is a consultant that offers feedback every step of the way.

Because the show is animated, it is able to channel the specific look of the comic in a way that wouldn’t be possible in live action. The series plays like an expansion of the comic, and Kirkman views it as his opportunity to write a second draft informed by hindsight and how comic readers responded to the story. In many ways, readers were the test audience for the show.

“I have a memory of how every issue was reacted to,” said Kirkman. “I read the fan mail. I did a letters column, I responded to people. It’s great to be in a writers room and be able to say, ‘Well, they didn’t really like that character because I did this; let’s see if we can make them like that character. They hated this character; let’s see if we can make them hate them more because that’s what we want.’”

The series’ stacked voice cast has also influenced the storytelling, with the actors revealing new aspects of the characters to explore. “We’ve known these characters for so long, but now we’re seeing these interpretations from these amazingly skilled actors that are taking things in their own direction.” Kirkman shouts out Jason Mantzoukas’ Rex Splode as a performance that helped him understand the character better, along with Walton Goggins’ Cecil Stedman and Seth Rogen’s Allen the Alien, who joined Mark in last week’s teaser announcing Invincible season 2’s “late 2023” release.

The success of Invincible hinges on the core family dynamic, and the series features a trio of A-listers in those three roles. Kirkman admires how Steven Yeun uses the comics as a roadmap for his performance, helping him modulate his performance so that he can organically build to the extremes he will eventually have to reach. Sandra Oh’s performance as Mark’s mother, Debbie, has significantly deepened the character’s role in the story and brought Kirkman to tears at multiple times in the recording studio. And in the especially challenging role of the show’s homicidal father figure, J.K. Simmons captures the diametrically opposed fury and humanity that make Omni-Man a tragic figure.

His work on a superhero TV series requires Kirkman to keep up with all of the latest superhero media. He still goes to see every new superhero movie, and is excited about James Gunn’s upcoming plans for DC along with the third installments in the MCU’s Ant-Man and Guardians of the Galaxy franchises. He selfishly wants DC and Marvel to stay out of the R-rated lane so that they don’t encroach on Invincible’s bloody turf, and laments that Batman has been pushed into a darker live-action territory rather than appearing in more kid-friendly fare. While he does see potential for the superhero train to slow down, he’s confident it will always be running.

“My buddy Rob Liefeld says, ‘You think we’re going back to a barefoot guy running through a building with guns after we’ve seen people fly and shoot lasers out of their eyes?’ There’s no going back from this,” said Kirkman. “There’s a level of spectacle that movies and television have evolved to require, and that level of spectacle is second nature in superhero stories. I think there’s always going to be a place for it.”

Have You Played… Qbasic Gorillas?