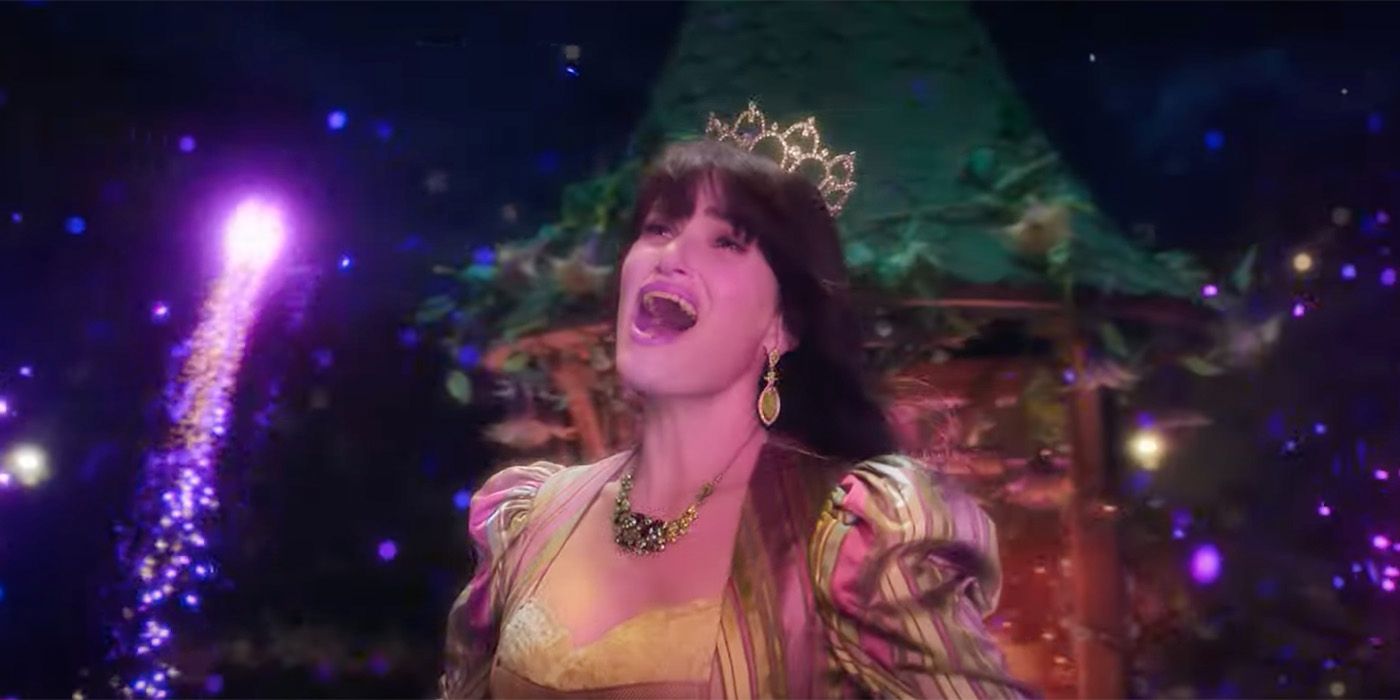 Idina Menzel is set to enchant us once again with her singing prowess in Disney+’s upcoming movie Disenchanted. Menzel is belting out her new single, “Love Power,” over new footage from the sequel. We see several new shots of the upcoming feature in passing while Menzel’s powerful voice hits several high notes. “Just remember the memories that show us the power of love,” she sings which also seems to be Giselle’s way back to finding herself after she takes a villainous turn in the movie.

The sequel to the 2007’s Enchanted follows Giselle, Robert, and a teenage Morgan, a decade after the events of the original film. While Giselle is still contemplating her happily ever after, the family moves to the suburb of Monroeville where she must juggle the challenges that come with a new home and new neighborhood. When troubles arrive, Giselle finds herself wishing for a perfect fairytale, but when the spell backfires, her family must rush to save her, and the Kingdom of Andalasia, before the clock strikes midnight.

The previously revealed trailer showcased the upcoming movie’s departure from the regular Disney fairytale formula. It looks modernized, shows our leads dealing with everyday problems, and gives Giselle an ‘evil stepmother’ turn while keeping the nostalgic factors intact. The animated sequences, helpful talking animals, singing, dancing, and opulence are on a whole new level in the sequel as our world collides with that of fairytales once more. The house of mouse has been long looking to evolve its stories to fit the contemporary world and Disenchanted looks like the right step in that direction.

RELATED: ‘Disenchanted’: Release Date, Trailer, Cast, and Everything We Know So Far

The movie sees the return of Amy Adams as Giselle, Patrick Dempsey as Giselle’s husband Robert, James Marsden as Prince Edward, and Menzel as Nancy, who is now married to Prince Edward. New cast members include Maya Rudolph, who is set to play the villain, Malvina, Gabriella Baldacchino plays teenage Morgan, Yvette Nicole Brown as Rosaleen, Jayma Mays as Ruby, Kolton Stewart as Malvina’s son Tyson, Oscar Nunez as Edgar and Griffin Newman as the voice of Pip, Giselle’s chipmunk friend from the original movie.

Adam Shankman directed the feature with a screenplay by Brigitte Hales which is based on an original story by David N. Weiss, J. David Stem, and Richard LaGravenese. Alan Menken returns to compose the score of the movie and co-wrote musical numbers with returning songwriter Stephen Schwartz.

Disenchanted premieres on November 18, you can check out the new clip below:

How to fix the difficulty bug in God of War Ragnarok