How “A Hope in Hell” Changed From Comics to Screen 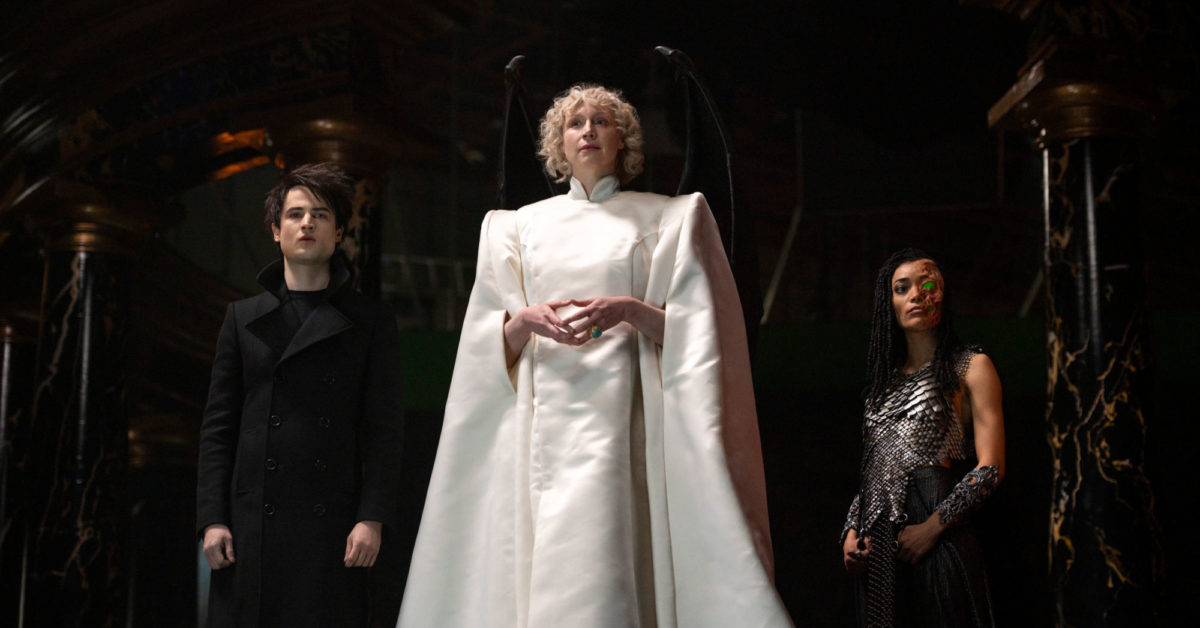 The fourth episode of The Sandman adapts the fourth issue of the original comic, “A Hope in Hell,” where Dream (Tom Sturridge) goes to hell to get his helmet back. Dream only has his wits to match against both Lucifer Morningstar (Gwendoline Christie) and all the demons in Hell, none of whom are inclined to play fair or nicely with him. The episode is surprisingly faithful to the comic, but necessary changes were made partly due to rights issues, others to improve the storytelling for television.

Lucifer is all smiles and politeness, but every word, every sentence carries a subtext of malevolence, which Christie conveys with relish. Any answer Dream gives could open a whole new trap, and he knows it. We meet Nada (Deborah Oyelade), an old love of Dream’s that he condemned to Hell 10,000 years ago out of spite, an indication that Dream has not always been the nicest guy. He was probably as bad as the people who fear and hate him say he was.

The changes from the comic are quite simple here: not Etrigan guiding Dream’s passage because the rights to that character were allegedly tied up for J.J. Abrams‘ Justice League Dark project at HBO Max. Matthew the Raven (Patton Oswalt) accompanies Dream as his sidekick and foil so that Dream can explain to him and thus the audience what the deal is with Hell and Lucifer Morningstar. Dream’s battle of wits against the demon Choronzon (Munya Chawawa) has him fighting Lucifer directly because it’s more dramatically direct and satisfying to have Lucifer fight him directly rather than by proxy as in the comic. Dream and Lucifer experience the physical injuries of the fight more explicitly than in the comic in order for it to be more visual and not just two people talking to each other. Matthew gives Dream a pep talk to reiterate the bond between Dream of the Endless and his raven. Mazikeen (Cassie Clare) gets to show she’s Lucifer’s enforcer.

Dream’s philosophical battle with Lucifer is the first indication that the comic was going to be so much more than just an escapist fantasy. All stories are dramatizations of themes where abstract ideas are translated into emotional experiences so that we may feel them rather than just think about them.

The Sandman Has A Recurring Theme of The Need for Kindness

Then there’s John Dee (David Thewlis) and his quest to retrieve Dream’s (Tom Sturridge) ruby, his greatest object of power. Dream had been desperate to get it because it holds the power to control dreams and thus all of reality. Dee is the most interesting change from the comics, more nuanced and embodying the amplified recurring theme of kindness that runs through the TV show. Dream and the Endless are embodiments of ideas, after all, and The Sandman is all about ideas playing out as stories.

The rest of this episode follows issue #5 of the comics, where Dee hitchhikes a ride with a lady to get to the warehouse where he hid Dream’s ruby. In the comic, he forces her at gunpoint, and she’s a sassy but scared 20something. In the show, she’s Rosemary (Sarah Niles from season 2 of Ted Lasso). a middle-aged lady with a rottweiler and survivor of a lying husband. Dee, whose lifetime of trauma makes him associate lies with abuse, develops a deep empathy for her. The show adds a scene where she tries to tell the clerk to call the cops, only for him to try to shoot Dee. Once again, the amulet does its job and kills anyone who tries to hurt him. He defines his morality to Rosemary: he would only hurt people who try to hurt him.

In the comic, once Rosemary takes Dee to his destiny, he shoots her dead just because he’s a villain and a psycho and that’s expected of him. In the show, he returns her kindness: he gives her the amulet, promising that it would protect her from harm forever, so she doesn’t need to lie anymore, since to him, lies are the worst things in the world. The Dee of the show embodies darkly the need for kindness in the world. He believes he’s going to save the world because the best villains think they’re the hero of the story. More on that in the next episode, the adaptation of the darkest single issue of The Sandman comic.

The Sandman is streaming on Netflix.

Cult of the Lamb Review (PS5)