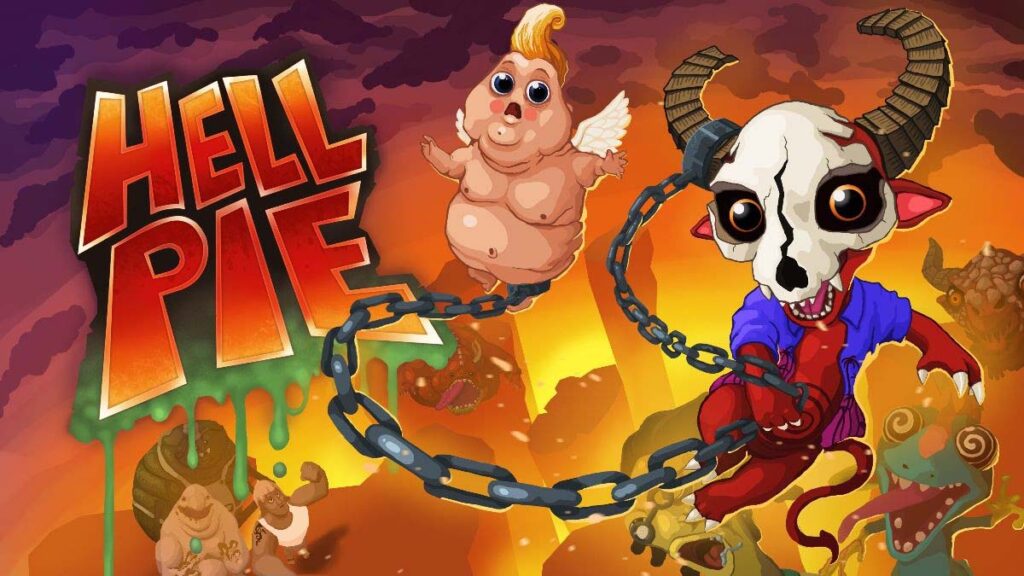 If bad taste games are your thing then you’ll likely want to check out ‘Hell Pie’, a quirky 3D platformer developed by Sluggerfly and published by Headup. Taking control of Nate, the ‘Demon of Bad Taste’, you’re tasked with venturing around a series of worlds to collect disgusting ingredients to make a birthday pie for Satan. Accompanied by a ‘pet angel’ known as Nugget, who is chained to Nate, you have to scour vast environments to find the ingredients you need while fighting off a series of unsavoury enemies along the way.

‘Hell Pie’ isn’t a game for the easily offended so if the likes of satanic creatures and helmet wearing poo soldiers aren’t for you, you’ll probably want to give this game a wide berth. In the game’s opening moments, ‘Hell Pie’ sets out its stall as you take control of Nate who receives a phone call from Satan about his birthday pie. It’s not long before you see the demon lord grotesquely destroying Nate’s colleagues and a brief interaction with Satan’s chef outlines that you’re going to have to get comfortable with being uncomfortable pretty quickly.

Visually there’s a lot going on in the game and the environments of the different outerworlds are rich. The main aim is to locate the three different ingredients – ranging from dirty tampons to rotten eggs – in the outerworld as well as collecting the gems (you can exchange these for clothes), which are scattered around, as well as cans of food to help Nugget power up and sacrificial unicorns to offer in exchange for mini-levels and new powers.

With Nugget attached to a chain, you can wield him to destroy boxes and barrels that are littered around the various landscapes, as well as using him to allow you to jump further and attack enemies. The more cans of food you collect, the better Nugget’s abilities are giving you more freedom and options to navigate around the often-tricky environments.

‘Hell Pie’ doesn’t retain its initial shock value and at its heart it’s a perfectly playable, if not slightly repetitive, 3D platformer. It won’t take you long to get to grips with the control system and I did find at times that it wasn’t always obvious where to go to next in order to progress. As you explore the different environments, you unlock teleporters to make it easier to travel around but I didn’t find myself using them all that often. If you’re willing to spend the time, there’s plenty to unveil but if you just want to work through the basics, follow the trail of gems and you’ll get through the game quickly enough. The bosses are also challenging enough that it might take you a few attempts to defeat them.

‘Hell Pie’ is a solid enough platformer and it’s sure to lure gamers in who like their games on the riskier side. It’s amusing and fun but I question how much repeat value there is once you’ve worked through the game. ‘Hell Pie’ is a larger gaming experience than you might expect and it delivers what it says it’s going to but when it comes to the platforming genre it doesn’t really reinvent the wheel. If you like a solid platformer with some chuckles along the way, ‘Hell Pie’ may just satisfy you.