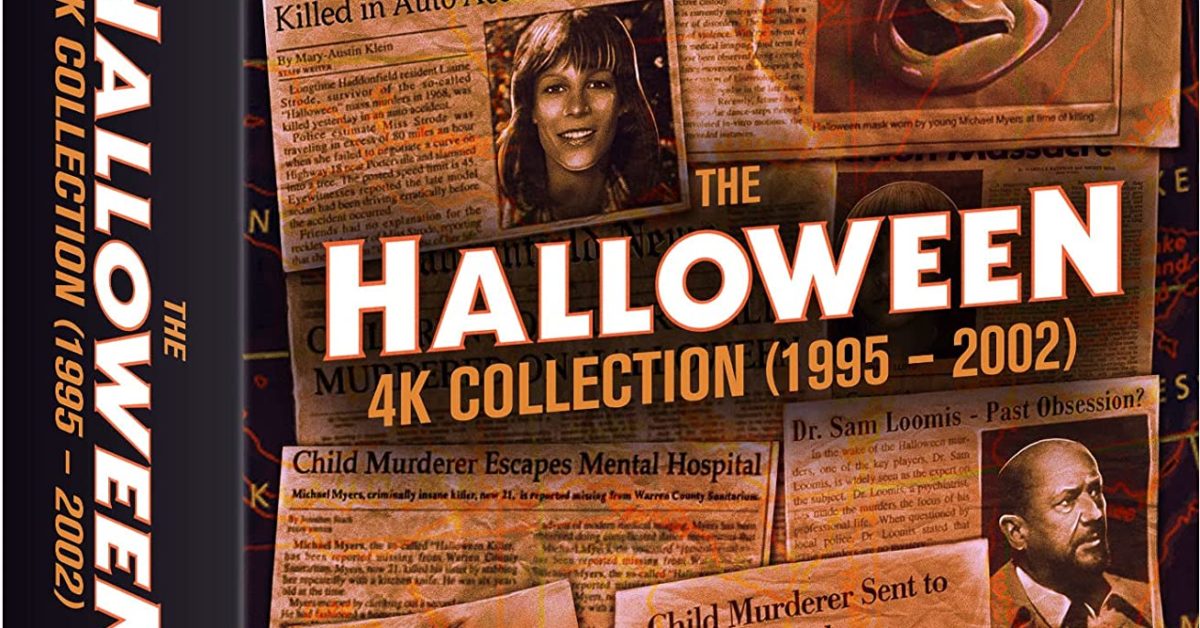 Halloween fans have an interesting box set to add to their collections this October, as The Halloween 4K Collection will be released from Scream Factory. The set will include Halloween: The Curse of Michael Myers, H20, and Resurrection, making this one of the weirder box sets I can think of. All of the films will be in 4K, and Curse will include the Producer’s Cut of the film as well, also in 4K. So, that is interesting. Depending on who you talk to, these are three of the worst films in this, or really any, horror franchise, so to bundle them all up is an interesting decision. Check out the box they come in below.

“MICHAEL CONTINUES HIS ATTACK ON HADDONFIELD IN ULTRA-HIGH DEFINITION! This box set comprises three terrifying films from one of the longest running horror series in cinema history. Michael Myers takes on Tommy Doyle and Dr. Loomis with help from a mysterious cult, comes face to face with Laurie Strode again and slashes his way through the cast of a reality TV show! This set includes all of the previously released extras plus some brand-new surprises …”

In a single horrifying night, Michael Myers’ reign of terror changed Halloween forever! Now, six years after he was presumed dead in a fire, Michael has returned to kill again – and this time there’s no escape! As his fury builds to a spine-tingling climax, the long-hidden secrets of the screen’s most maniacal murderer are shockingly revealed. Donald Pleasence (Halloween), Paul Rudd (Anchorman: The Legend Of Ron Burgundy, Ant-Man), Marianne Hagan (Stake Land) and Mitchell Ryan (Lethal Weapon) star.

Now the headmistress of a private school, Laurie Strode (Jamie Lee Curtis) is still struggling with the horrifying, 20-year-old memories of the maniacal killer Michael Myers when he suddenly appears again with a vengeance! And this Halloween, Laurie’s rebellious son (Josh Hartnett, 30 Days Of Night), his girlfriend (Michelle Williams, Venom), and their friends will become Michael’s newest victims unless Laurie can conquer her fears and put evil in its place once and for all. LL Cool J (NCIS: Los Angeles), Joseph Gordon-Levitt (The Dark Knight Rises, Inception), Nancy Stephens (Halloween) and Janet Leigh (Psycho, The Fog) also star.

The reality programmers at DangerTainment have selected Rudy (Sean Patrick Thomas, Dracula 2000), Bill (Thomas Ian Nicholas, American Pie), and a group of thrill-seeking teenagers to spend one fun-filled night in the childhood home of serial killer Michael Myers. But the planned live broadcast turns deadly when their evening of excitement becomes a night of horror as Michael himself decides to crash the party. Halloween: Resurrection also stars Bianca Kajlich (Bring It On), Katee Sackhoff (Riddick, Battlestar Galactica), Busta Rhymes (Narc), and Tyra Banks, along with a special appearance by Jamie Lee Curtis.