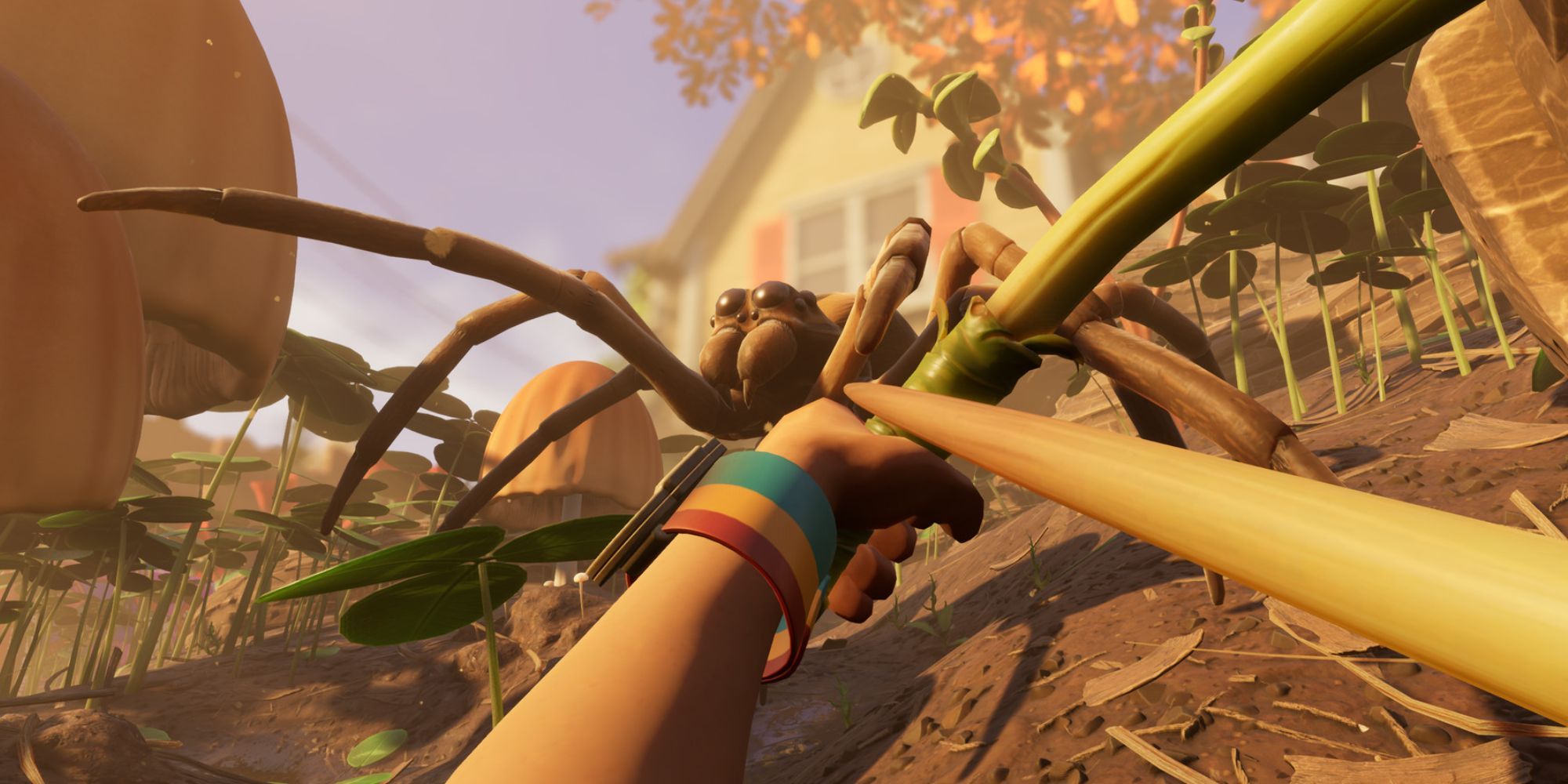 I never played Grounded in early access, I’m likely a rare breed in the forthcoming barrage of full-release reviews. While I had a steeper learning curve than most, I like to think there was a lot of upside to having a fresher perspective on Obsidian’s foray into the survival genre. Survival games tend not to be my thing, I don’t like sandboxes, I don’t like building and I don’t think I’ve ever enjoyed gathering resources. Why are you reviewing a survival base-building crafting game then? I hear you ask. Well, something about Grounded drew me in. A combination of the premise being a shrunken player surviving in an everyday suburban family garden, the parodying of the early ‘90s and the game’s appealing visual style had me inexplicably excited to cut grass aimlessly.

NEXT: Solium Infernum Is About Taking Over Hell Through Politics And Cunning

Grounded really is beautiful. Lighting is utilised very effectively in the crowded world of the Backyard. Sun-dappled blades of grass dripping dew during the early hours of the morning is a sight to behold. Much like a real-life bustling ecosystem, both your eyes and ears are kept busy. I created my base in the starting area and never escaped the constant Waluigi-esque noises of the roaming weevils and the ants that refused to let them live in peace. There is a lot to see, the ground is littered with collectable pebbles, plant fibres, sprigs – everything you need to get started in Grounded’s crafting tree. Cast your eyes above the ground level and you’ll see towering grass, weeds, bees buzzing far overhead and occasionally a gargantuan crow which despite looking very imposing, has a very non-threatening aura about it.

The insects have been adapted very well. I play on arachnophobia safe mode (boo!) with the slider pushed to the maximum. The terrifying arachnids now resemble two pieces of faeces slapped together, complete with a pair of eyes. And yet their blood-curdling noises still have me springing away in abject fear. The horror in Grounded doesn’t stop with spiders either. Poison-flinging bombardier beetles, lumbering stinkbugs, rapid stabbing mosquitoes and the horrors that lurk at the bottom of the Pond all serve to turn the game into a survival horror at times. The proportions of Grounded do well to make the player feel small, achieving the obvious role reversal.

In terms of actual combat, it can feel a bit lacklustre. The strategy of move in, hit the creature three times, move out, block their attack and repeat the process holds true for many of the game’s insects. Taking down a ladybug or bombardier beetle isn’t that different to fighting an airborne mosquito. Sure, each insect has a variety of moves but that rarely changes the player’s strategy to any great degree. Much like their real-life counterparts, many of the creatures you face will struggle with the geometry of the Backyard. Creatures can be kited into locations that are inaccessible for their pathing, allowing the player to freely rain arrows upon them (though this is time-consuming). Higher-tier creatures pose more of a challenge but the same basic concepts apply, time your blocks and then pick your moments to unleash a barrage of attacks.

A minor gripe I have with the combat is the use of aggro. If you drop a creature’s aggro then its health will instantly reset to full. I understand it’s to stop cheesing, chipping away at a powerful creature while dying without consequence to eventually defeat it. But during an intense kitting battle against a mosquito, I wandered a touch too far only to see it buzz off into the distance with a full health bar once more.

Grounded isn’t a pure sandbox experience. It wouldn’t be like Obsidian to create a game without a robust narrative. The events of the game surround a Dr Wendell Tully, a low-level scientist at the brilliant tech company Ominent Practical Technologies. Tully is responsible for the shrink machine that the player characters have fallen victim to. The story is advanced by assisting BURG.L (short for Burger Lad), a friendly robot created by Tully that was originally designed to be a short-order cook but was soon promoted to help the scientist in his experiments.

The narrative and plot are the primary advancements that Obsidian has made with Grounded over the past couple of years of early access. I approve of the approach Obsidian took to implementing the story. I’m someone who can get pretty lost in these big open worlds but Grounded gives clear directions to the player. Finding chips for BURG.L advances the story, here is a general location where you’ll find the next one, figure it out from there. This gives appropriate hints without stifling the exploratory nature of the game.

As for the premise, Grounded is set in an over-the-top version of the early ‘90s. Think Stranger Things or Back to the Future for comparison. The technology boom is blossoming and there are lots of exciting possibilities, it almost touches upon the retro-futurism of Fallout at times. The personalities of the children are only expressed in the odd piece of humorous dialogue they blurt out, but it does a surprisingly good job at conveying what each of the kids is all about.

We learn more about Tully from audio logs that have been scattered about his various labs in the Backyard. While I feel audio logs are a tad overdone in gaming, they do work in a game like Grounded where isolation (or group isolation if playing multiplayer) is a part of the experience. If there were other human characters giving contextual information to the players it would erase the intriguing mystery of the narrative, logs are a good way to fill the gap. There is some clever environmental storytelling in Grounded, a certain metallic item at the bottom of the Pond had me very curious about its story implications. I found myself walking around the Backyard searching for various household items just for curiosity’s sake, it was entertaining.

This brings us to what I think the core strength of Grounded is. It’s a cool concept that’s been well-executed creatively. The Backyard is full of life. From corner to corner, there’s so much to see and explore. Creatures aside, the map itself is a huge triumph. The Backyard is very messy (who discards that many juice boxes without cleaning up?) and that adds to the player’s drive to explore, finding random household items half-buried in soil has never been so satisfying. The creative ways these objects have been given gameplay implications is particularly pleasing. For example, a discarded mint box can be used to mine mint, a strong substance used for late-game weaponry. Or take the section of the map that is completely toxic due to weed killer being sprayed in that area, the player needs to craft protective clothing to traverse it. Grounded is packed full of cool environmental features.

As I mentioned in the opener, I’m not much of a base builder. I lived a nomadic lifestyle in the Backyard. But from the base building features I did interact with, it seemed functional. The player can only carry five of any large structural component which did get a bit frustrating as you’d have to move back and forth constantly to flesh out a base. The crafting system is deep and accessible, I rarely found myself navigating to the wiki as the UI makes it clear what you need to craft something (provided you’ve analysed the necessary components). I imagine fans of the genre will be satisfied with Grounded’s resource gathering and crafting gameplay loop as it is similar to the systems of beloved survival games.

I feel there is some missed potential with Grounded. Weather is a big thing I wish they experimented with more. The weather remains very consistent in Grounded – very mild sunny days eternally. I would love to have seen the chaos of a rainstorm or the effect of a strong wind on the Backyard. Though these elements have the potential to be very frustrating, I can see potential there. Also, a smidgen more on-the-nose narrative stuff would’ve been welcome, Obsidian crafts masterful stories and while I appreciate the subtle storytelling, I’d have loved opportunities to get a little more immersed in the world.

Overall, the survival genre is very saturated. Grounded is a unique take on a tired formula and is genuinely a breath of fresh air in the space. It doesn’t reinvent the wheel but it doesn’t have to, it’s chosen a premise and has adapted it beautifully and skillfully. While some improvements can be made in combat and other areas, the game is a well-made experience that survival fans will love. I personally can’t wait to jump in with three friends following the full launch. It can get lonely out there all alone in suburbia.

NEXT: It’s Been A Great Year For Weird Indie Games On Game Pass

Modern Warfare 2 Scraps Red Dots, But This Is a Great Beta