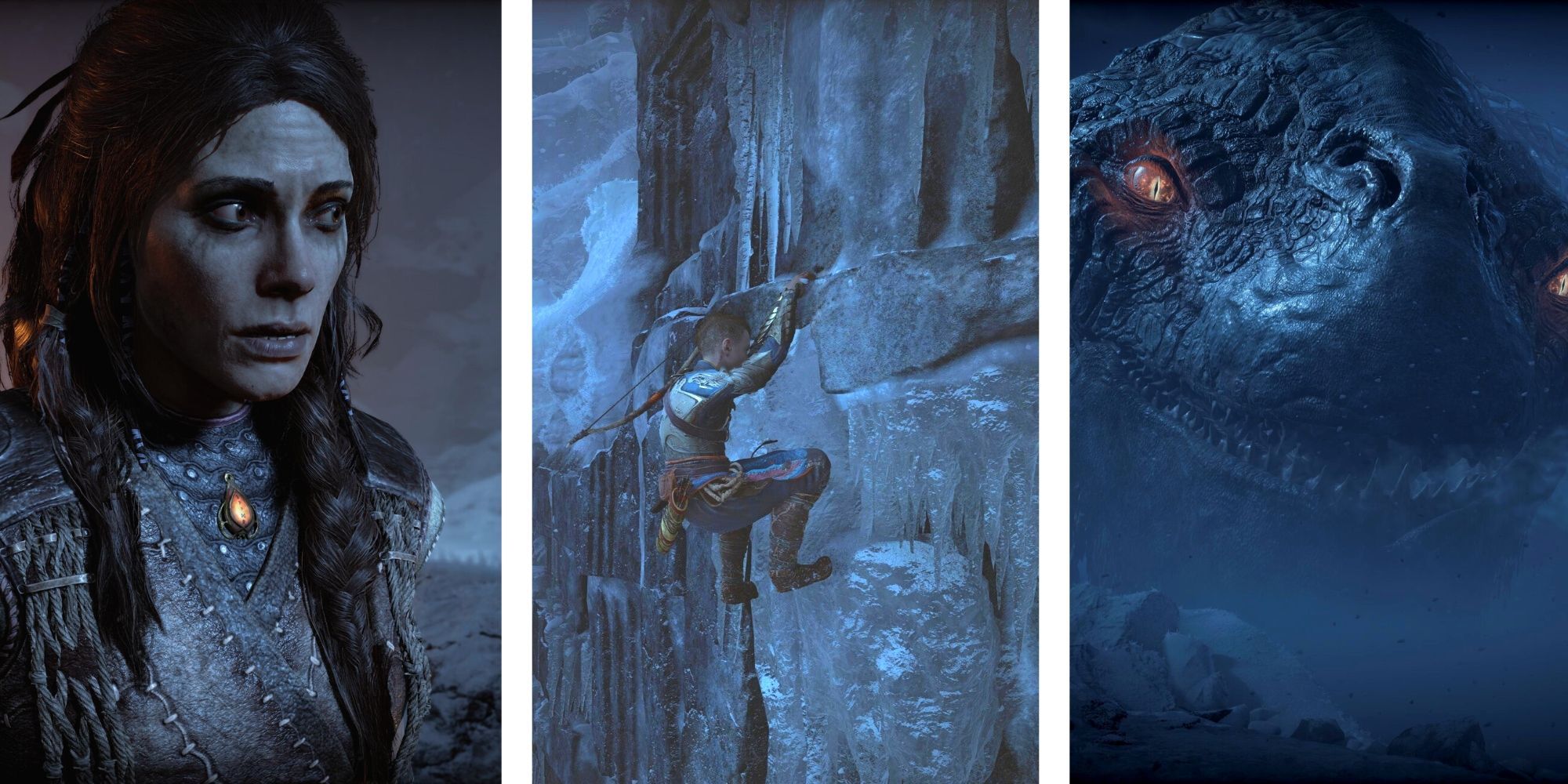 God of War Ragnarok has Kratos and Atreus hack, stab, and brutalize their way through Norse mythology. The vast majority of the time, it’s Kratos doing the dismembering. However, in the “Old Friends” quest, players take control of Atreus for the first time in the game. It’s the main quest for Atreus alone; well, not completely alone.

RELATED: God Of War Ragnarok: The Quest For Tyr Walkthrough

Sindri the dwarf tags along too, and, after hearing about their antics earlier in the game, “Old Friends” gives players a glimpse into what Atreus and Sindri’s adventures look like. Filled with backstory, humor, and some refreshing change of character, it’s one of the most memorable events in God of War Ragnarok.

Sneak away with Sindri, officially starting the “Old Friends” quest. Go through the Yggdrasil portal to Midgard. It’s the first time Atreus returns to snowy Midgard, and the frozen lightning bold from the Kratos and Thor’s fight can be seen off in the distance. Climb down the path following Sindri. Open the chest and feel the difference between playing Kratos and Atreus in a cute little cutscene. Next, break the gate with Atreus’ Sonic Arrows and follow the path.

Once the skinnier path opens up, climb up the red-painted walls to the right. Get the right angle to shoot the red flaming jar and open the first red chest. Then, go back to following Sindri in his adorable snow outfit until he asks you to shoot a barrel. A little further, before jumping down, look up and shoot the hanging bucket for the Hacksilver. Throughout the journey, make sure to smash things and loot Hacksilver off of enemies and the ground. Next, follow Sindri down the main path.

On The Way To World Serpent

At a piece of a fallen metal statue, first, shoot the green Soundstone, then turn around, climb the platforms, and make a right when available. This will give the correct angle to shoot open the next Soundstone part of the metal barrier where Sindri is waiting. Run back to the barrier and crouch through the opening. In the first fighting portion, Sindri becomes Atreus’ own sidekick and will throw magical weaponry at foes when pressing the square button.

RELATED: How Long Does It Take To Beat God Of War Ragnarok?

Like father like son. Atreus’ fighting style has the same controls as Kratos but relies solely on his bow. In a refreshing change of pace, playing as Atreus feels light and ranged-focused. Feel free to smash, counter-attack, and block, though — Atreus can handle himself well enough. Using the R3 stun attacks will come in especially handy throughout the quest. After the fight, follow Sindri and take the broken elevator that he will fix with his Dwarven skills.

After calling Jormungandr, the World Serpent, go through the frozen door and then the cave. Fight some Draugrs, don’t miss the red chest by shooting the flaming barrel, and, after a few more enemies, shoot the Soundstone target at the end of the room to expose a crack. Crawl through and again, Atreus is the dad to Sindri this time, who jumps into his arms. After that, Atreus goes on alone to confront Freya. Climb up the wall and come down on the other side. Shoot the exploding jar across the way and climb over.

Squeeze through another crack, and you’ll come across a larger opening with a few Draugrs to defeat. Make your way past the unlit torches and shoot the Soundstone on a wooden gate. This first shot allows Atreus to get an angle on the red flaming barrel, explode that and shoot the next Soundstone target. Grab the red chest to the left before moving on, back through the area the Soundstone cleared out. Climb through and defeat the next wave of enemies. Grab the gold chest in the area and climb up the painted platforms.

On the top level, in the far right corner, you’ll find another red chest down a little hallway — Just before that is the main path to continue forward. Fight some more Draugrs and grab the next golden chest. Continue on until you face some Nightmares in a cave. Look up and right for a bucket to shoot down in the next big clearing. A number of Draugrs will spawn here, so try to shoot the hanging barrels to take out the ranged ones to the left side first.

This should make the fight with the melee Draugrs much easier. Grab the gold chest on the bridge and go behind the red chest to the right, explode the red jar, and go back to open the chest. Heading left down the hallway, fight off some Nightmares and one Draugr Guard, then keep to the path. Grab another red chest, and Sindri will check on Atreus’ progress. Decide whether or not to chuck a snowball at him and continue on your way.

Climb the wall and have Atreus approach Freya, who is ominously sharpening a sword. Following the tense encounter, climb up the chain and grab the legendary chest on the left. This will give Atreus his first bow attachment. Up ahead, grab the gold chest to the left before squeezing along the wall to the right. Shoot another Soundstone target and meet with Sindri. The most difficult fight for Atreus will end in a short cutscene as Nightmares and Draugrs spawn.

Defeat them, climb up the painted platform, and shoot the hanging bucket up ahead. Fight some more Draugrs, and Sindri will tell Atreus some pretty messed up family stuff. Go back up the elevator through the Yggdrasil portal, and the quest is complete. Playing hooky with Atreus was fun, but the players will take Kratos back over during an awkward meal.

NEXT: God Of War Ragnarok: Should You Go To Alfheim Or Niflheim