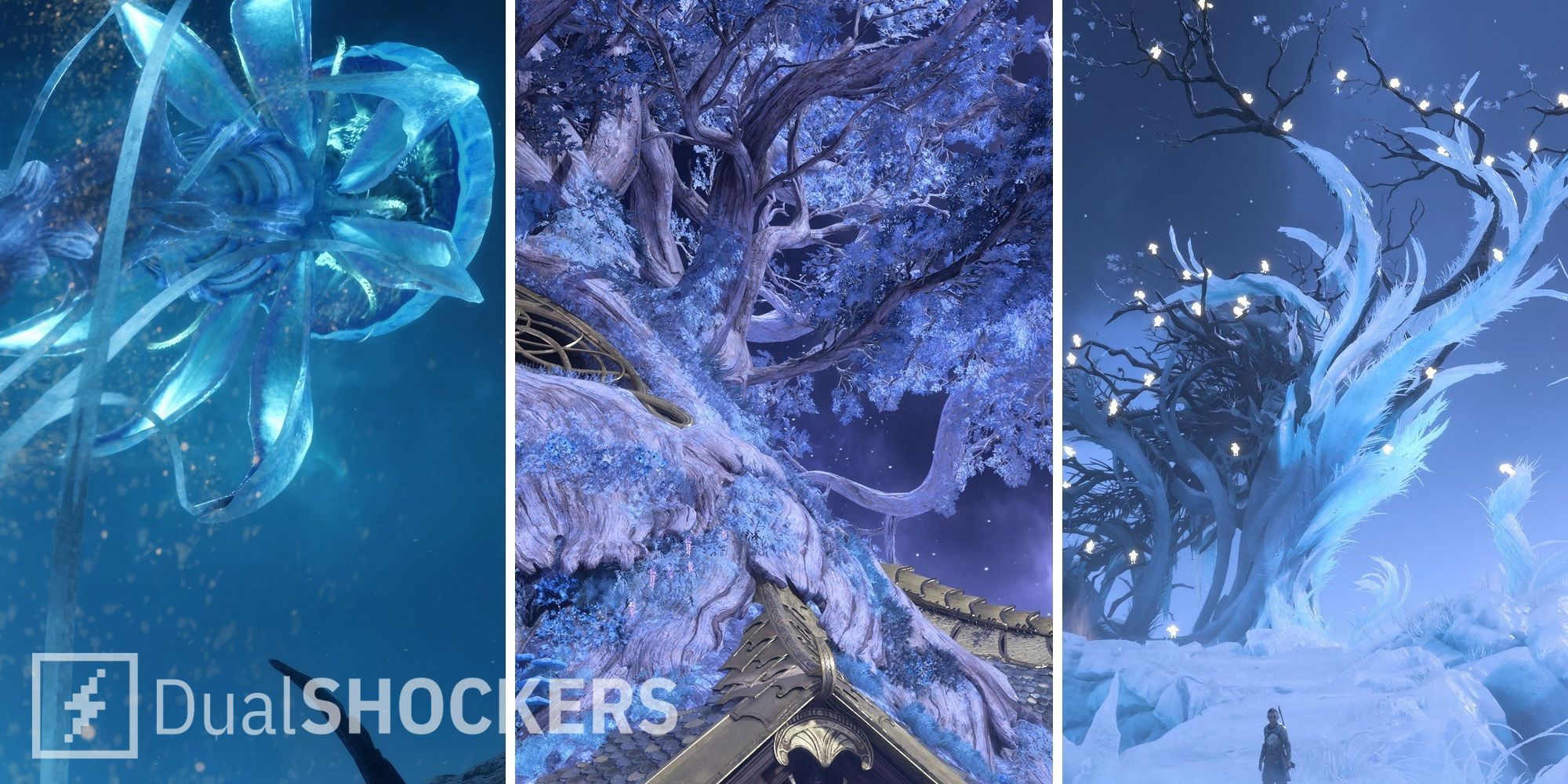 God Of War Ragnarok revisits Kratos, Atreus, and the rest of the cast three years after the events of God of War (2018). Much has changed in this time; specifically, Fimbulwinter has set in, affecting the realms in different ways. Throughout the game, you’ll venture across the realms, exploring beautiful (and sometimes deadly) environments.

Warning: story and location spoilers from late game are discussed below.

Perhaps an obvious one — but no less cool — is the now frozen Lake of Nine in Midgard. Kratos, Atreus, and Mimir spent many hours in the previous game boating around this lake, swapping tales and legends. Now, with the onset of Fimbulwinter, the lake has been entirely transformed into a frozen wasteland.

Traversing this quasi-familiar location, recognizable but completely different, provides a profound sense of time having passed and of the danger looming ever-closer. The region itself is still quite beautiful — just in a completely different way than before.

Kratos and Atreus visited Alfheim back in God of War (2018), and they’re able to revisit this location in Ragnarok, but from the opposite side of the Temple of Light. Rather than the lush and beautiful waterways, they instead trek through a twisting desert canyon path. The Alfheim Desert areas — comprised of the Barrens and Forbidden Sands subregions — provide beautiful vistas for your adventures through the dunes.

This landscape is made especially enchanting after completing the Secret of the Sands side quest, which showers the night sky with initially a massive jellyfish creature called a Hafgufa, eventually two, until finally the sky is instead filled with hundreds of baby Hafgufas.

After Atreus first ventures to Asgard and encounters the beauty of the landscape, Odin’s Library might feel a bit dull by comparison. But Odin’s Library oozes intrigue. Especially after seeing Odin’s Great Lodge and it not being the golden palace that Atreus expected, Odin’s Library feels mysterious.

It’s not ostentatious or lavish, but instead feel incredibly secretive and mystical, including floating rocks, scattered artifacts, and a literal tear in reality which contains the truth of all things. What could have been a fairly underwhelming sanctum is instead layered with history and legend; the location suits the studious and conniving Odin.

The God of War franchise is famous for the sense of scale it can offer — battling on the backs of Titans in God of War 3, and the iconic Jormungandr world serpent first encountered in God of War (2018). One such environment that emphasizes the fantastical scale found in this world is in Jotunheim, realm of the Giants.

Specifically, when Atreus and Angrboda venture into Gryla’s house to rescue the stolen wolf. Sneaking through the massive home gives a strong fairytale feel, hinting at Jack and the Beanstalk vibes as you sneak behind overturned goblets and through cracks in the walls.

6/10 The Veiled Passage In Vanaheim

All of Vanaheim is a beautiful and lush jungle, creating a stark contrast to the other locations in the nine realms, but the journey through The Veiled Passage — and completing the Freya’s Missing Peace side quest — is perhaps the most striking in all of Vanaheim.

The journey takes you into a beautiful run-down ruin, complete with some incredible narrative moments as Freya relives the day of her ill-fated wedding to Odin. While all of Vanaheim features a similar storied and mystical charm, this side mission really highlights the ancient beauty of this realm.

5/10 The Forge In Svartalfheim

The Forge is less about the location itself and more about the magic of the moment, but make no mistake: this location is quite striking. After Brok and Kratos reach The Forge in Svartalfheim, they plunge deep underwater, where they are met by the Lady of the Lake — an aquatic creature who forges powerful items.

RELATED: God Of War Ragnarok’s Endgame Is Full Of Surprises

The surprise of this location being underwater, followed by the mysterious Lady of the Lake herself, creates an enchanting and memorable location, and one with great narrative significance.

During The Word Of Fate main story path, Kratos, Freya, and Mimir seek out the Norns — the fates of these lands — to gain some insight into future events and possibly to help bring back Atreus from Asgard. After venturing to the Well of Urd and navigating the Norn-induced visions, you will encounter a kelpie, which you will mount.

The kelpie will dive deep underwater, offering another unexpected underwater journey, and leading you to the bizarre home of the Norns. This environment is brief but distinct, full of seaweed-like threads filling the mysterious room in which you encounter the enigmatic Norns themselves.

Once a poisonous realm in God of War (2018), Niflheim has transformed into a bit of a winter wonderland due to Fimbulwinter. The location doesn’t get much traffic in this game, only featuring a few smaller areas at various points in the narrative, but the main hub location featuring the Raven Tree is simply incredible.

The frozen tree, complete with the spirits of the ‘slain’ Odin’s Ravens you collect throughout the game, creates an otherworldly atmosphere. Add to that the creepy, rhythmic way the ravens speak to you in riddles, and it creates an unsettling and unforgettable location.

Encountered early in the game, the Yggdrasil Tree House is a breathtakingly beautiful location. Functioning as your ‘new home’ and base of operations during the course of Ragnarok, returning to this environment after major story beats always comes with a sigh of relief — not only for completing another harrowing adventure, but also from taking in the sheer beauty and artistry of the location’s design.

After being introduced to a small loop portion of the Yggdrasil Tree in the previous game, this location feels like a fantastic inclusion, offering you a greater glimpse of the iconic tree from Norse mythology.

Easily the most breathtaking location found in the game, The Spark of the World is pure cosmic bliss. Beginning in Surtr’s Forge, the transition from the smoke and brimstone of Muspelheim to the awe-inspiring vistas of The Spark of the World creates such a stark imprint on one’s mind. The floating chunks of earth, displayed over a backdrop of the swirling cosmos, makes for a truly dazzling experience unparalleled in the God of War franchise. It also happens to be the site of one of the coolest boss fights in the game — in no small part to the setting itself.

NEXT: God Of War Ragnarok: Things You Need To Do After Beating The Game

Can you play solos in Warzone 2?