Cause I ain’t washing dishes in a ditch no more

The simulator genre has gotten out of hand. Actually, it was never very well handled, but now that technology allows us to actually simulate things, it’s gotten weirder. What used to be a look at how to fly a plane or build a city has become streamer fodder. It’s not about how accurate it is, it’s about how weird it is.

The concept has been made fun of so many times, it isn’t even a joke anymore. Okay, Goat Simulator; haha, it has nothing to do with simulating a goat.

These days, buying a game with “simulator” in the name is a roll of the dice. Are you going to land on a sloppy joke game, a lifeless attempt at replicating a job, or somewhere in between? Something that recreates the experience while still being fun.

Gas Station Simulator may be a decent example of that sort of game. Largely, it is what it says on the box; you run a gas station. However, it has inventive ways to make it more than sheer drudgery.

You start off with a derelict property that is barely worth saving. With a little elbow grease, you get the gas station functional again and ready to sling out petrol and snacks. The overall goal of the game is to upgrade your gas station to the fifth level and pay back some nebulous loan to your shady uncle.

Each upgrade serves as something of a chapter. Tasks given to you by your uncle guide you through setting up your station, from getting the warehouse running to eventually hiring employees. That start is actually a pretty addicting little gameplay loop. You’re given plenty of clearance to customize your station and put extra effort into any little niche that you feel needs it, but the objectives allow you to keep track of what you eventually need to focus on.

The workday is a series of mini-games. Everything you do from selling snacks to fueling vehicles has a small game associated with them. They’re not all that bad, staying simple and breezy, and never lingering too long. Okay, so by the 500th time you’re scanning items on the belt, it gets a little tiresome, but I’m not sure how you add variety to the experience.

There’s no micromanaging allowed, however. You can hire employees, but you don’t schedule what times they work or take breaks. You also can’t adjust how much you’re selling items for. It will tell you as you’re buying supplies whether they’re above or below market value, but that’s not really much help when you don’t know what the scanner picks them up as. In a way, I don’t want that much nitty-gritty, but at the same time, the option would be nice. 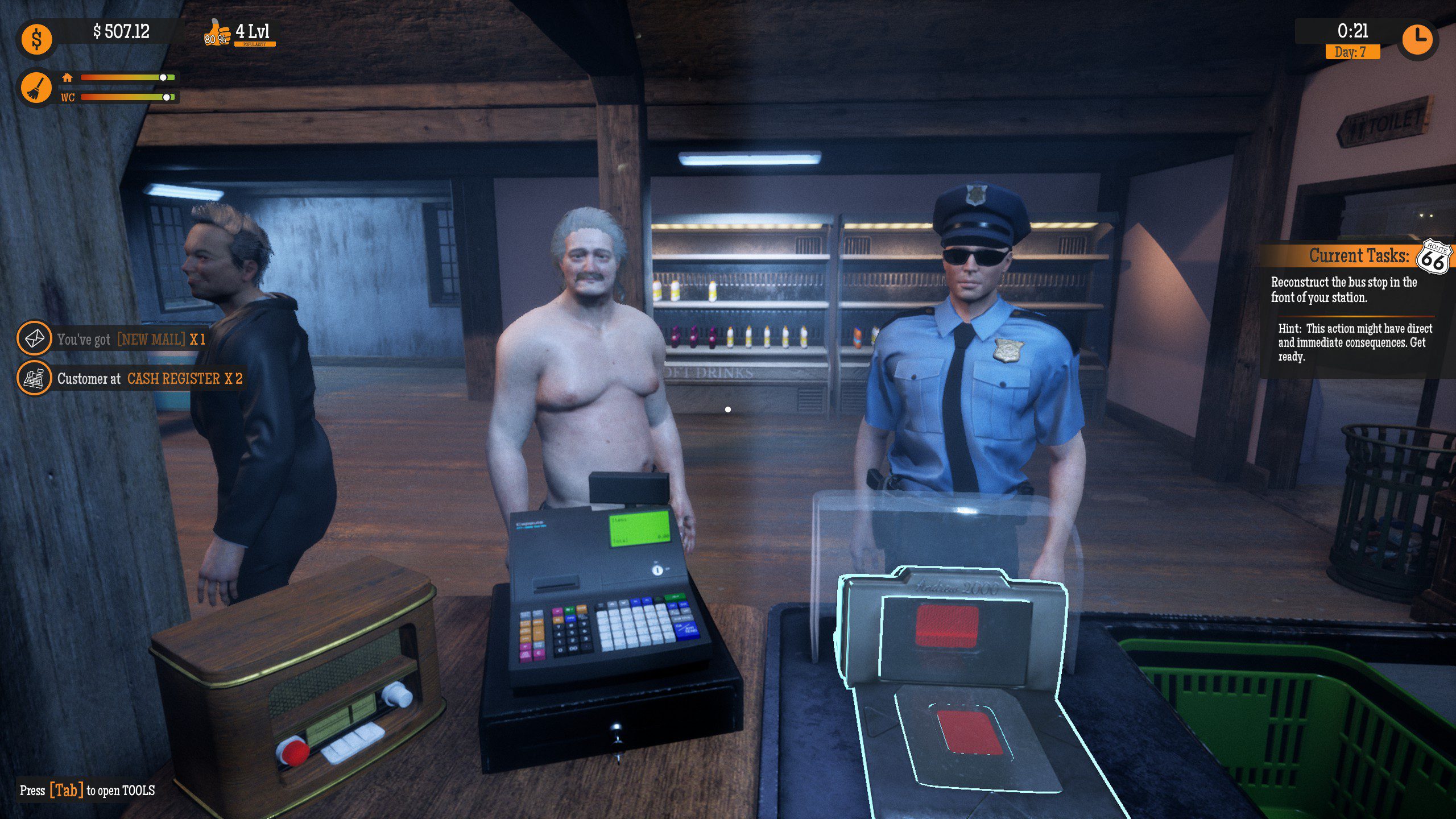 It does get a bit weird. Busses will sometimes drop off hordes of people wearing alien masks. One of the optional jobs you can do is breaking into people’s trunks, and it doesn’t matter if they’re standing there, watching you do it, there are no repercussions unless you screw up. Even then, you don’t get fined or go to jail, it just hurts your station’s reputation slightly.

There’s also a little rapscallion named Dennis who will spraypaint dicks on the side of your gas station. I actually don’t think they’re detrimental or affect anything, but you can paint over them. Now that I think about it, I should have just kept painting over his lesser graffiti and left up the dicks, so mine would be the gas station with dicks all over it. Inspiration always strikes me at the least opportune moment.

The AI is pretty dumb. Sandstorms will deposit sandbanks on the driveway, and you need to clear them with the excavator: my least favorite part of the game. However, it is hilarious that people blindly drive up these mounds and get stuck.

If you manage to completely screw up traffic — like I did every time I shut the warehouse door before the delivery truck had fully departed — you can hit a button that summons aliens to abduct everyone at the station. Maybe including an “oops, our pathfinding is unreliable” button is a little cheap, but at least they found a fun way to do it. 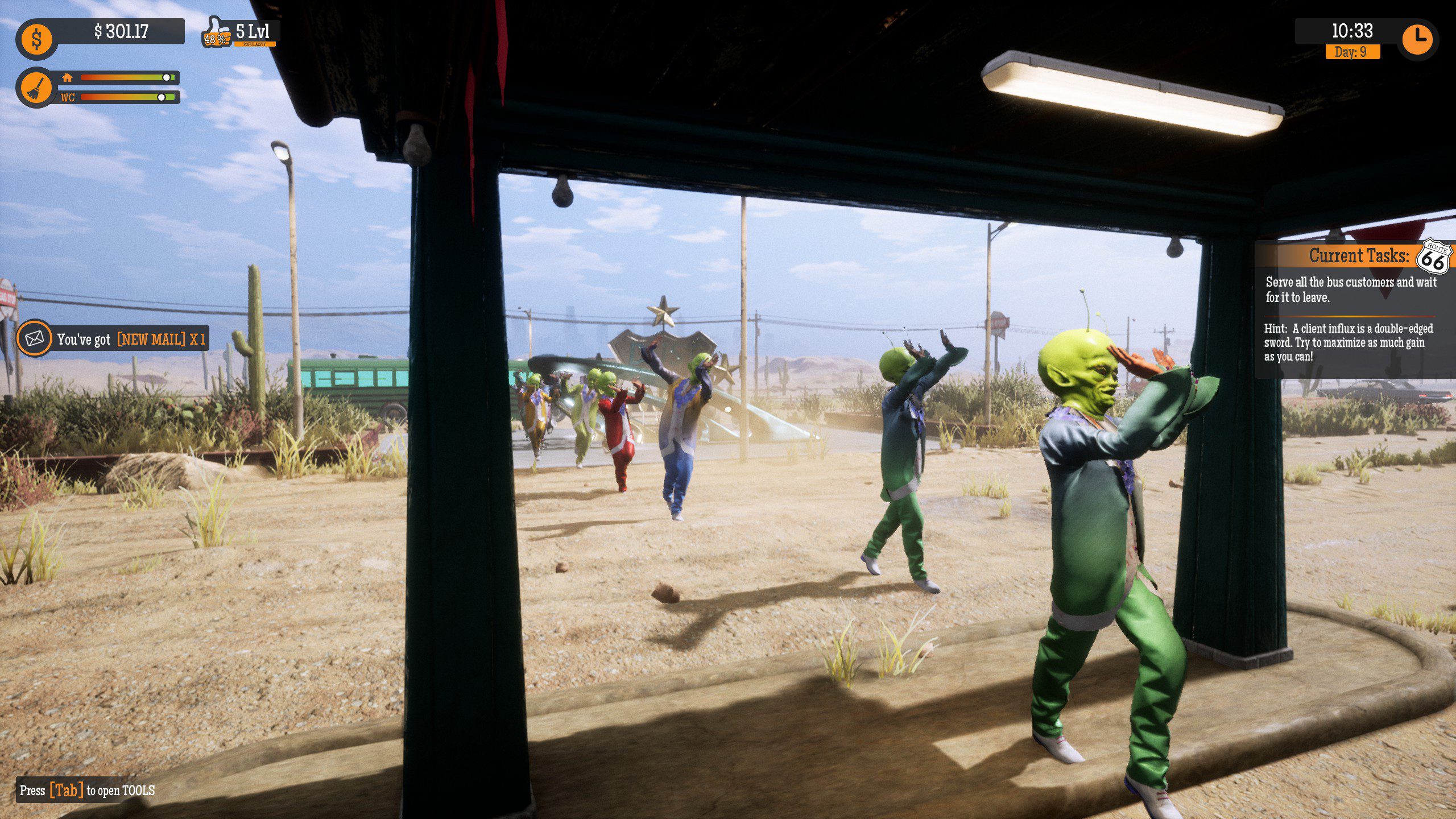 Gas Station Simulator was estimated to me at 20+ hours, but in reality, I finished it in 13, and I spent a lot of time making my store look pretty. That’s probably a good thing, as the gameplay was starting to wear. Even managing your employees requires some juggling, as none are as efficient as doing it yourself, and they need to be brought off breaks and paid manually. It’s better than juggling four jobs at once while keeping the storefront clean, but it comes with its own pains.

Parts of it also seem to have been scaled back. Early marketing showed off a modern convenience-style gas station, but you never make it past the rustic Americana phase. Likewise, there’s a derelict carwash behind the station, but if that was ever a planned feature, it seems to either have been scrapped or saved for DLC.

There’s enough content that the cut features aren’t really missed, but the fact that there’s this vestigial reminder right out your back door is a little strange. 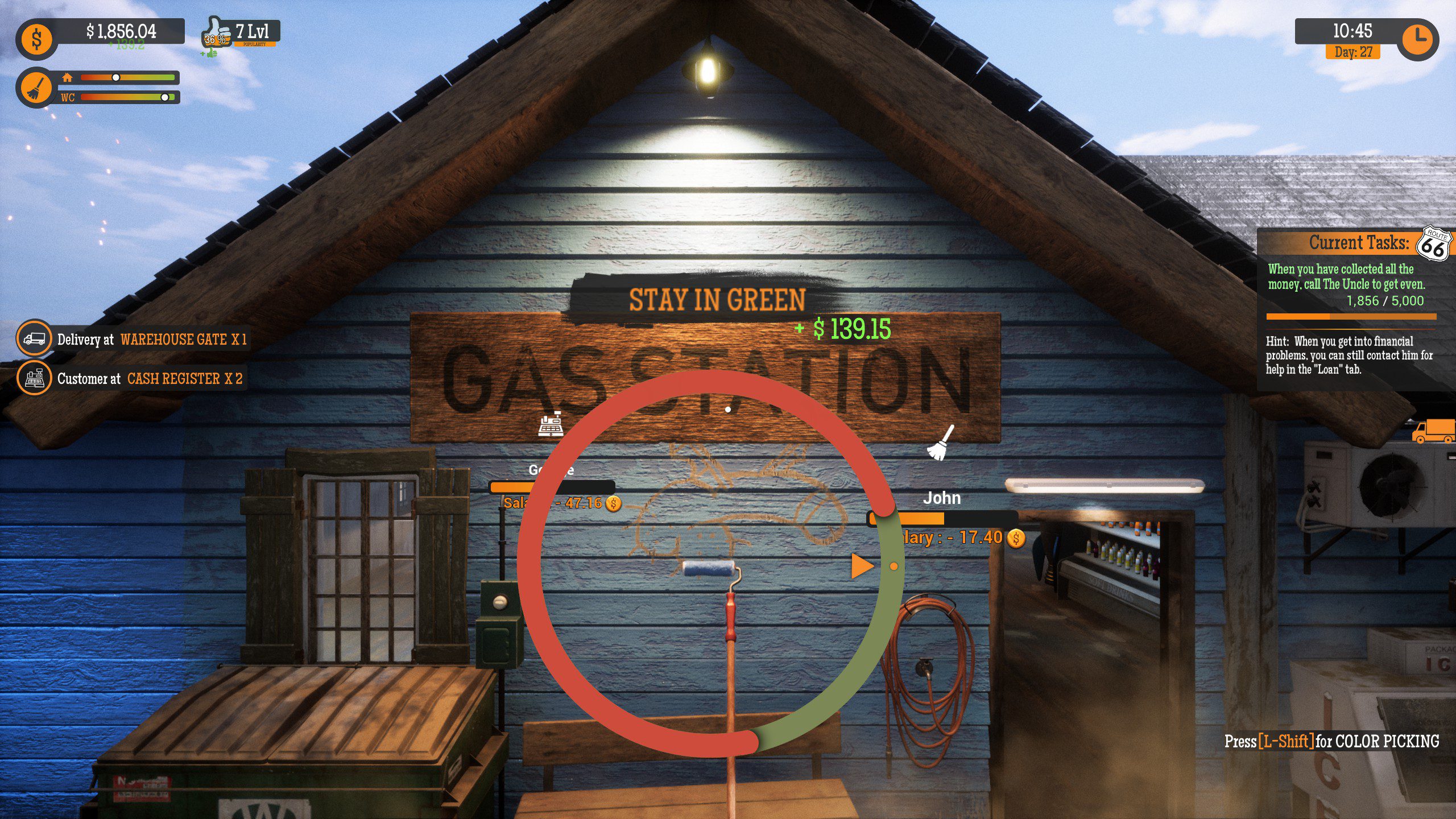 I had fun with Gas Station Simulator, mostly. While it helps get across the experience of running a highway petrol stop, it doesn’t feel like work. Sure, sometimes you’re run ragged, you might suffer some frustrating setbacks, and it’s hard to find good help, but it manages to stay entertaining through its runtime.

It’s sloppy, definitely. A lot of the jank is probably left intentionally to attract the aforementioned streamer crowd, but it’s entirely intrusive. The weirdies are there, but the experience isn’t cheapened because of it.

Overall, it hits its niche. It lands on the edges of the sweet spot for modern simulators. It manages to be fun and atmospheric. It’s a hard day’s work, but someone has to do it.

Before Your Eyes is clever, heart-wrenching, and a must-play – Destructoid

‘Beauty And The Beast’ Actor Says Without Belle…

Adopt Me Reveal All The Details For Upcoming Winter Update –…