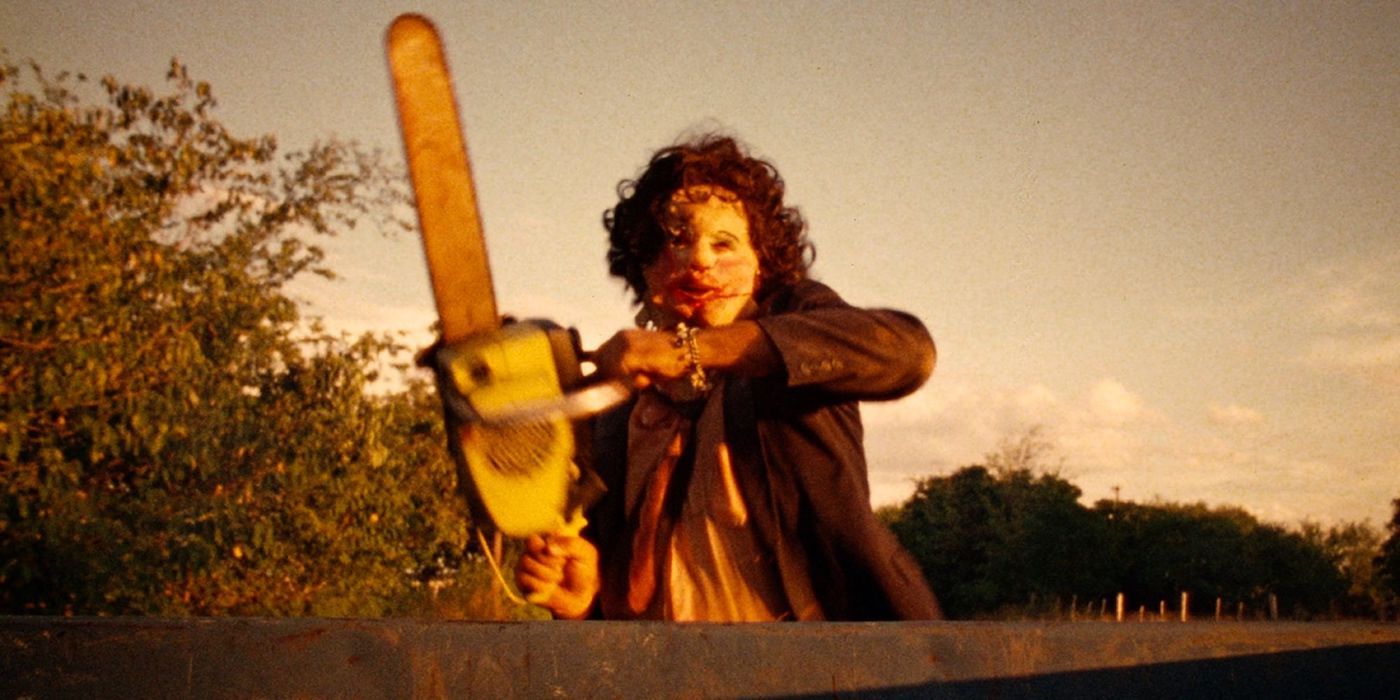 The Halloween season is upon us, and it’s time to break out all our favorite horror movies. While there is so much love for franchises like Halloween and Friday the 13th, one of the original slasher films that helped establish the genre is Tobe Hooper‘s The Texas Chain Saw Massacre. The 1974 slasher that introduced Leatherface to the world hasn’t lost its haunting power in its almost 50-year lifespan, and now the good folks at Fright-Rags are releasing a new collection based on the murder happy nightmare.

The collection features four designs, two reprints and two brand-new styles. The first reprint depicts the iconic ending of Texas Chain Saw which had Leatherface chasing the film’s “final girl” Sally Hardesty down a road on a sun-soaked Texas morning. To add to the eerie mood, Sally’s traumatized eyes are filling up the sky. The other reprint emulates a classic horror comic of the 70s and 80s similarly to another horror franchise Creepshow. The terrifying homage is called “Tales of Texas”. All the major characters are here including The Cook, Leatherface, Sally, the Hitchhiker, Franklin, Jerry, Kirk, and Pam.

In terms of the new designs, the first one sees Leatherface ready to strike with his chainsaw. The shape of Texas surrounds the iconic slasher with all the Sawyer family animal skulls lining the inside of the state. The last design sees Leatherface as he appears in the finale of the film. He was fancied up ready for dinner, but Sally ruined those plans by escaping. Like the first reprint design, this shirt has Leatherface chasing after Sally, but here characters like The Cook, The Hitchhiker, and Grandpa are around him. The design also features Pam’s gruesome hook scene before she gets stuffed in a freezer, and we see one of the final shots of Sally covered in blood as well.

RELATED: ‘Halloween III: Season of the Witch’ Gets 40th Anniversary Collection From Fright-Rags

The Texas Chain Saw Massacre to this day is one of the scariest films ever made. From the iconic opening narration voiced by John Larroquette to Hooper’s brilliantly twisted direction to the insanely disturbing atmosphere, this film will make your skin crawl. It’s one of the few films where you’re paralyzed in fear while watching it, too scared to move, because you’re afraid the imagery might cut you. That’s how terrifyingly sharp the film is. Hooper’s direction and Daniel Pearl’s cinematography satisfyingly feels like you’re failing at not trying to get cut on a barbed wire fence. Scenes like the swing set tracking shot and Leatherface’s “chainsaw dance” are some of the most memorable in horror history. These frightening shirts perfectly capture Texas Chain Saw’s funhouse of horrors.

Like any horror franchise, there have been countless sequels since the 1974 original that have struggled to recapture what made Texas Chain Saw great. There have been small franchise victories like the decent 2003 remake, and the reboot earlier this year, simply titled Texas Chainsaw Massacre, was just okay, but nothing has come close to matching the original. Texas Chain Saw is such an influential film that has inspired countless other genre filmmakers, including Ti West, who has recently taken the horror world by storm with X and Pearl.

How FromSoftware helped me learn to approach Tekken 7