Evil Dead: The Game Tips For Survivors And Kandarian Demons 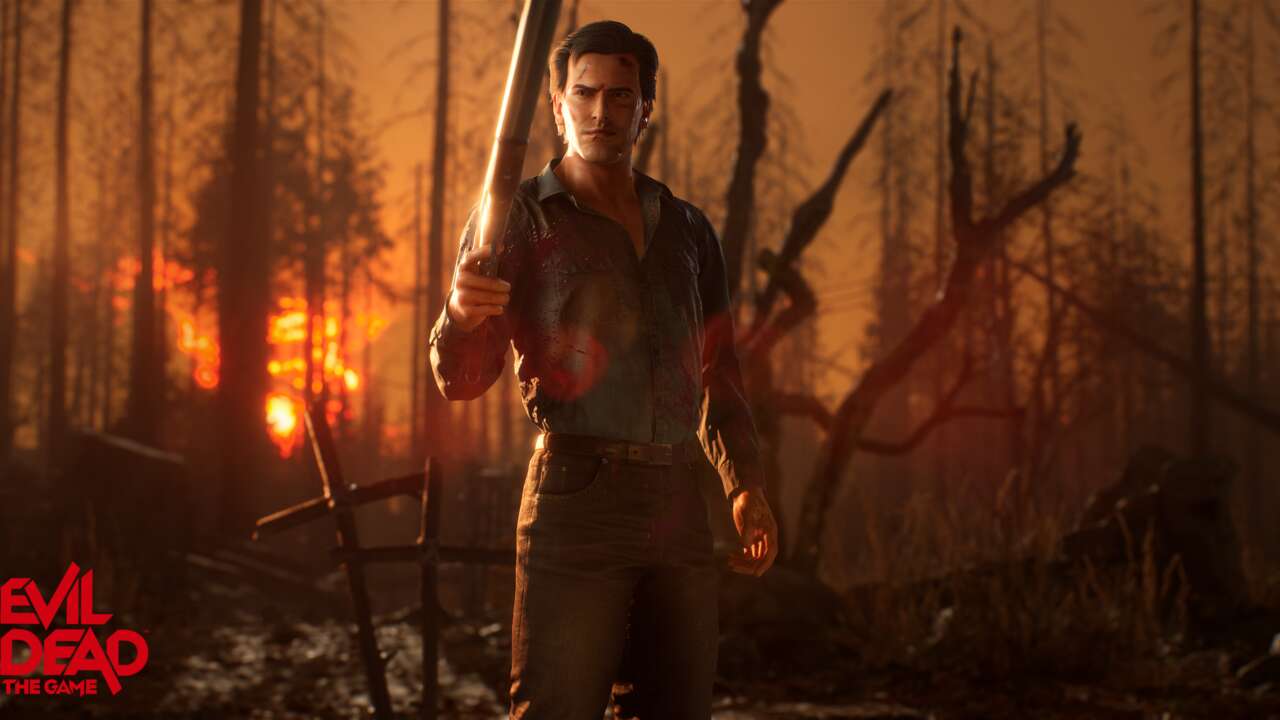 Evil Dead: The Game is finally here. Filled to the brim with demon slaying action, this PvP/PvE asymmetrical experience delivers all of the thrills the franchise is known for. Players will certainly need to work together if they hope to survive the night. Unless of course, they’ve chosen to take up the spirits of Evil Dead’s demonic entities. Then it’s all human possession and mean-spirited trees. Groovy!

Like most games of this ilk, the goal of the survivors is to best their overpowered rival. They’ll need to hunt down pages of the Necronomicon–the Book of the Dead–and use it to find a magical dagger needed to defeat the Dark Ones. This is easier said than done given how Evil Dead’s large maps are swarming with enemies, the most dangerous being those who are player-controlled. They’ll do everything in their power to stop the survivors at every turn.

No matter which side of the battle you’re on, Evil Dead: The Game has a ton of tools to help you achieve your goals. Knowing how and when to use them is key. Here are a few tips to keep in mind during your first several hours playing Evil Dead: The Game.

Evil Dead: The Game utilizes several horror-based mechanics/systems that need to be managed during play. This main one, when playing as a survivor, is the fear gauge. Located on the bottom left of the screen (right under your life bar) is a meter that slowly fills up over the course of a match. Certain stimuli and/or compromising situations–getting attacked by deadites, tripping a scare trap, being alone or in darkness–contributes to your rising fear.

The last thing you’d want to happen in a horror movie is to be targeted by the rampaging monster. The same thing applies here. If your character becomes too afraid, they’ll signal their whereabouts to the demon player by actively showing up on the map. This also makes you prone to possession; the demon can take over your body, forcing you to attack your teammates.

The good news is that there are several ways to combat your fear. Stay with your team. Use matches to activate light sources scattered about the map. If possible, don’t take on several enemies at once. And if you have a character that has fear-based buffs, don’t forget to use them. While this all might seem like obvious, we’ve won several matches as demons because players forgot to manage their fear. It’s a secondary thing that doesn’t directly contribute to a loss of health. Most just forget about it while running to and from their objectives.

When we say sneaky, we don’t mean crawling through tall grass ghillie-style. We mean don’t do things that’ll bring unwanted attention to yourself. Using a gun to take down enemies early on isn’t wise for instance. Every time you do, you risk the chance of alerting the demon player. It’s best to stick with melee weapons at the start of a match.

The demon will also know when you’ve gotten into a vehicle via a prompt informing them of your location and the direction you’re moving in. That doesn’t mean you should never use a car. Just be aware that it’s like sending up a signal flare.

Evil Dead: The Game has a handy ping system. You can ping unwanted weapons, health-based items, and more while running about. That said, the ping system is best used in conjunction with the game’s map. Because the play area is huge, it’s best to mark a desired location before running off.

You won’t necessarily get lost while playing, as anyone who pulls up the map will be able to spot your icon. The problem comes when navigating through these areas with a split team. And since a lack of mic usage can often leave teams disadvantaged, it’s quite possible for them to see your icon and yet, have trouble actually finding you during an attack. Are you on this hill overlooking a mine shaft or are you in the tunnels below?

Working as a team is key. To do that properly, you’ll need to stay with your teammates. Splitting up in hopes of finding the pages of the Necronomicon sooner than later will only lead to a rising fear gauge and possibly death.

That’s not to say that you can’t search different houses while rooting through an area. Just that you should be close enough to one another to help out if things go bad. Don’t be half way across the map expecting someone to find your remains during a deadite attack.

Make sure to dodge attacks. Too many players go into a fight, chainsaw swinging, expecting to win. While it does work most of the time against low level enemies, you’ll eventually take some damage during the scuffle. That damage adds up over time.

For instance, we noticed that a lot of players will attack and kill Deadite Berserkers head on, even after realizing that they explode upon death. They never think to hit the dodge button right after because the explosion doesn’t do a ton of damage. Those same players will have inadvertently used up all of their healing items right before one of the final segments of a match. This often results in a failed attempt/quick death. Again, it’s important to keep yourself healthy. Dodge!

One of the best things you can do during a scuffle is perform a finisher. These moves, prompted when an enemy is knocked off-balance after receiving a series of melee attacks, allow you to either deal a ton of damage or outright kill a foe. That isn’t the only reason you’ll want to use these moves though. For one, enemies killed by a finisher are more likely to drop an item. Need more ammo or some extra health? Try a finisher.

The other reason it’s a good idea to use these moves is because they lock you into an animation that can’t be interrupted. Meaning that you don’t sustain any damage while the attack is being carried out. We’ve been able to survive powerful boss attacks with low health by focusing on weaker enemies, timing a finisher so that it activates right before the boss moves in. The opponent’s blow didn’t land because we were too busy removing a deadite’s head to care.

If you’re playing Evil Dead: The Game on PC, it might be wise to temper your settings based on playing as the demons. While in third-person as a survivor, everything was fine on maxed out settings. That wasn’t the case when we transitioned to first person as a demon; we experienced frame issues/lag during some matches.

This wasn’t always the case, and cross-platform play and server issues might’ve been the culprits at the time. That said, if you are experiencing some of these problems when playing as a demon, we found that lowering the graphical settings helped things a bit.

In Evil Dead: The Game, there are three different Kandarian Demons to choose from. All of them work in a similar fashion at the start of a match–they are weak and need to upgrade their abilities in order to be a real threat. This is something that is done over time. You can speed up this process by scaring and attacking survivors.

Try your best to hunt down the survivors at the start of the match. As soon as you spot them, head in that direction. You won’t be able to summon deadites yet. You will, however, be able to set traps. Set as many as you can. The idea is to scare the survivors enough to adequately speed up the leveling process.

Once you’ve leveled enough to spawn enemies, try to set them in your enemies’ path. Possess trees. Steal their car. Basically, keep poking at them. Don’t worry about killing the survivors early on. The goal is to keep their fear up as you continue to level. This will give you a huge edge during the final battles.

Possession is a key mechanic in Evil Dead. Knowing what to do when you possess someone (or something) is important. Sometimes it’s best to avoid going for the kill. Instead, try splitting people up.

For instance, you can possess someone and walk them off the side of a cliff. That might be more devastating than trying to attack their teammate. Especially if you set summon-based traps at the bottom. Now the other survivors will need to get down there to help them. That’s when you possess their car and try to run some of them over. The more chaos the better; instead of focusing on the objectives, the survivors are forced to deal with these setbacks.

There will be times when you’ll be prompted to directly battle the other players. You won’t have to worry about gaining Infernal Energy–red orbs that are collected/needed to do just about anything as the boss demon–because it’ll be freely given to you. The goal during these times is to overwhelm them using a combination of random AI monsters, summons, and directly attacking as the boss demon. The problem here is that it’s easy to spread your forces too thin.

It can be tough to take down a full team of survivors. Even more so if you don’t time your summons. The Infernal Energy meter and cool down timers prevent you from spamming monsters. Because of this, it might be better to hold off on summoning, say, a sole Elite monster until you have the power to call on several weaker ones first. That way they won’t walk into a fight four against one. The same goes for joining the fray as the boss. Make sure you have some back up summons ready, power and cool-down wise, before directly taking on the survivors.

The Northman, Uncharted, and more new movies you can watch at home

WoW Cross-Faction Guilds Are Possible Thanks To A PTR Glitch, But Don’t Expect…