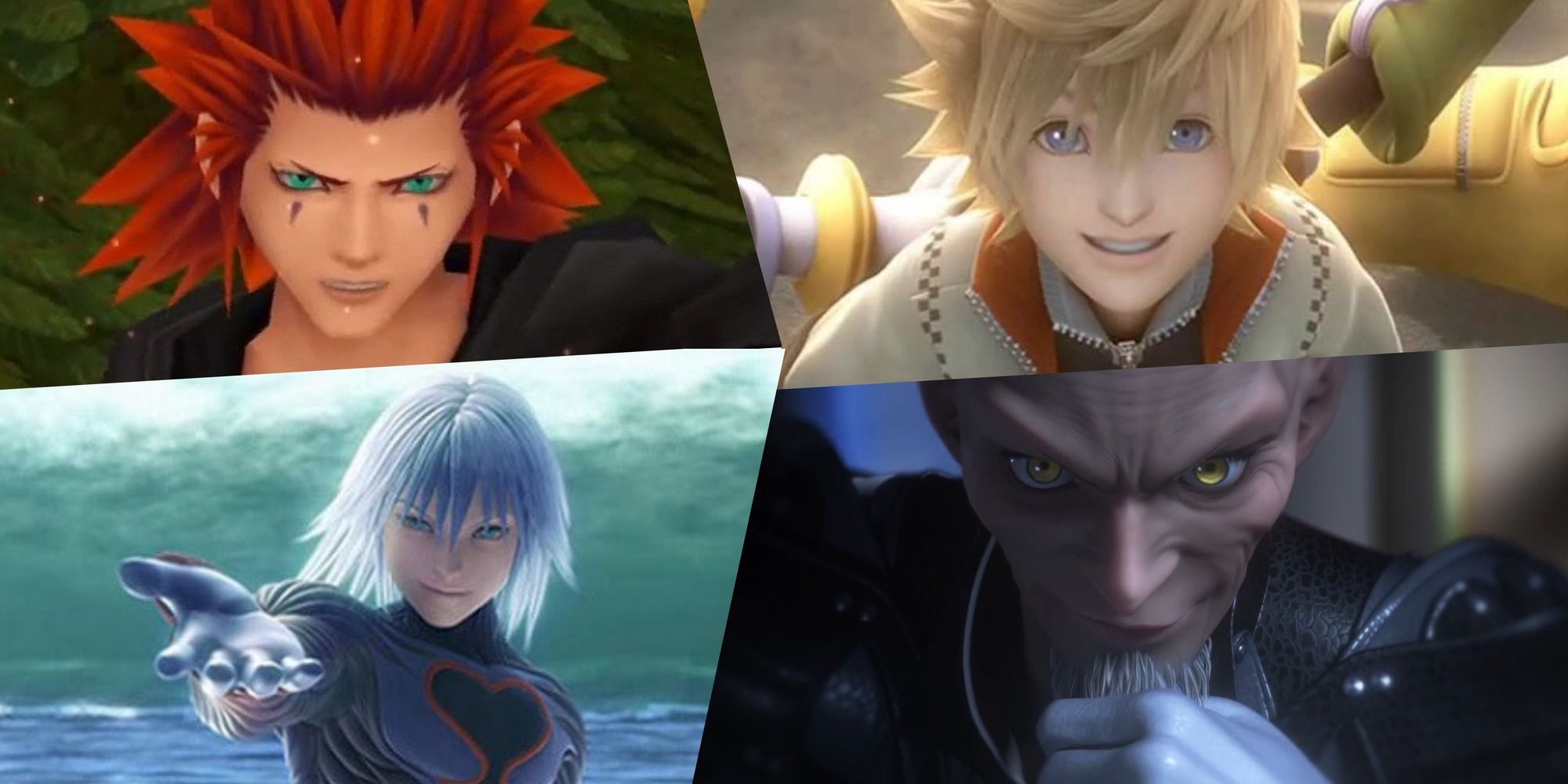 Organization XIII are a reoccurring group of villains in the Kingdom Hearts series. They initially appeared in Chain of Memories before being the main antagonists in 2. At that point in time, there were 13 members total, but more recent games have made the total count rise to 20.

This list will rank every Organization XIII member in the entire series based on how important they are, their writing quality, and how unique their fights are.

Many Organization members don’t have much backstory in the first game they appear in, but they usually get more lore in follow-up entries. That has yet to happen for Lexaelus, and the chances of fans learning more about the characters grows less likely as the series goes on.

Lexaelus is also very forgettable due to having very little screen time. His largest appearance is within Riku’s Chain of Memories story, and even then he is one of the least relevant villains. Additionally, his weapon is relatively basic compared to what other Organization members use.

Xaldin is another unimportant member of the Organization, but he is a little more memorable than Lexaelus. He appears fairly early in Kingdom Hearts 2’s main storyline. Xaldin acts as the final boss within the third world, the Beast’s Castle.

He fights with six axes that he can control from a distance. Like Lexaelus, the chances of Xaldin becoming a more interesting character have dwindled since the Dark Seeker Saga came to its conclusion in Kingdom Hearts 3.

Vexen is the highest ranking Organization member seen in Chain of Memories, but he isn’t considered the main antagonist of the game. Still, he does play a slightly important role. Vexen’s boss fight near the end of the game is one of the hardest in the main storyline, and he is the person who created Riku’s replica.

Most Organization members in Chain of Memories want to betray the Organization, but Vexen remains loyal until Kingdom Hearts 3. His growth is mildly interesting, but it happens almost entirely in the background.

He’s even mildly relevant for a world in Kingdom Hearts 3. Luxord fights using playing cards that can inflict unique status effects. He feels much more unique than some other members due to his fight being somewhat like a mini-game.

​Out of all the Organization members introduced in Chain of Memories, Larxene is the one with the most screen time. She isn’t the final boss, nor does she leave a large impact on the story, but her cold personality is very memorable.

Dance, water, dance! Both Demyx’s weapon and personality make him a stand-out member of the Organization despite having very little story significance.

Demyx is very chill, which makes him quite different from the often stone-cold brutes that make up the Organization. He fights using a guitar that can create many water replicas of itself.

Saix is another member that appears in both incarnations of Organization XIII. What makes him stand out from the others is his unique dynamic with another member. He and Axel were best friends when they were still human in Birth By Sleep.

Saix currently has the most potential to gain improved writing. He has a chance to have a redemption arc in future installments now that the Organization is defeated and since he has rejoined Axel by the end of Kingdom Hearts 3.

Xehanort may be the main antagonists of the entire series, but his young counterpart comes from a time when he has yet to commit most of his foul acts. He is rarely shown outside the Dark Road mobile game.

Despite being the same person, young Xehanort doesn’t have the same experience, iconic moments, or impact that his older counterpart has. This counterpart is still a good character, but he doesn’t quite live up to the present Xehanort’s impact.

Marluxia acts as the final boss for the second Kingdom Hearts game, Chain of Memories. Most final bosses in the series are in some way Xehanort, so this makes Marluxia stand out a lot.

Marluxia hasn’t returned to the canon storyline since his defeat, but his standout presence, design, and boss fight make him a very memorable part of the Organization.

Xion was first introduced in the DS title 358/2 Days, in which she is very significant. She acts as a potential replacement for Roxas if Xehanort deems him unusable. This makes her the secondary protagonist of the game.

Her death at the end is one of the most tragic moments in the entire series. Xion was eventually brought back in Kingdom Hearts 3 after fan demand to see her again grew, but her relevance in that game is vastly smaller.

There wasn’t much interesting about Xigbar when he was first introduced, but as the series progressed, he became exponentially more important. Birth By Sleep made his human counterpart a minor villain, and he returned to be in the True Organization in Dream Drop Distance.

The end of Kingdom Hearts 3 sets him up as one of the most important villains moving forward by giving him a connection to the Master of Masters. As-is, however, there’s still too much unknown about Xigbar to place him much higher.

Zexion is among the smartest members of Organization XIII. He used to be a scientist when he was human, and he fights using a book upon becoming a Nobody. After his Nobody is defeated, he returns to his human form.

Zexion becomes an ally of Sora nearly a year and a half later in the series’ overarching storyline. He returns to being a scientist and helps the hero team plan out how they’re going to defeat Xehanort.

The original Kingdom Hearts final boss is an iconic villain. Even after his initial defeat, Ansem stayed extremely relevant due to being Xehanort’s Nobody and due to his impact on Riku’s character development.

Ansem eventually returned as a member of the True Organization XIII in Dream Drop Distance, and he is one of the last members defeated in Kingdom Hearts 3.

Terra was one of the three protagonists in Birth By Sleep. At the end, he gets betrayed by Xehanort. Xehanort takes over his body and turns him into a True Organization XIII member.

While there are a few turncoat members of the Organization, most are villains that become allies. Terranort is the only example of a character that initially appeared as a hero before turning into a villain.

For most of Birth By Sleep, Vanitas is a mysterious masked figure. At the end, he is revealed to be an evil counterpart of Ventus and looks like Sora due to Ventus briefly connecting his heart to Sora’s at the start of the game.

His direct connection to two of the series’ protagonists makes Vanitas much more relevant than a lot of the other non-Xehanort members of the Organization.

Axel is the best written Organization member that became a good guy. Axel secretly helps Sora in every entry that he appears in, he prioritizes his friendship with Roxas, and he is the only member to unlock a Keyblade after becoming human again.

His bond with Roxas, Saix, Xion, and many other members makes Axel feel like the heart of the Organization. Axel has even started building connections with the hero team. He gets along very well with nearly everyone. Axel also has an iconic catchphrase: “Got it memorized?”

Riku was a character that struggled with the darkness ever since the very beginning of the series, but he eventually walked the path to dawn. Dark Riku is a replica that represents the evil he once held within his heart.

This makes him wonderful symbolism, but there’s even more to him. Dark Riku truly believes he is the real Riku, and he wants to prove it until he eventually realizes the truth.

The main antagonists of the entire series is a brilliant mastermind that played all of his cards right until the bitter end. Nearly every major plot line was a result of Xehanort’s schemes in some way.

His iconicness and relevance are both undoubtable, but he does have some notable flaws, the biggest of which is how easily he gave up from a few words at the end of Kingdom Hearts 3 after so much effort to succeed.

Xemnas is the Nobody of Xehanort, meaning he is merely the shell of what once was a full being. His character arc revolves around trying to become complete again, which makes him a more interesting villain.

Xemnas is the final boss of Kingdom Hearts 2 and one of the last bosses in 3. He doesn’t have as much impact as the real Xehanort, but he was more determined to see his goal met.

When Kingdom Hearts 2 was first released, players were puzzled by who the new protagonist was. As the story unfolded, it was revealed that Roxas was the Nobody of Sora.

Roxas would again return as the protagonist in 358/2 Days, become a minor background character in multiple other entries, and then reappear as an ally in 3. He is the only non-mind controlled protagonist within the Organization.

NEXT:What Order Should You Play The Kingdom Hearts Games?