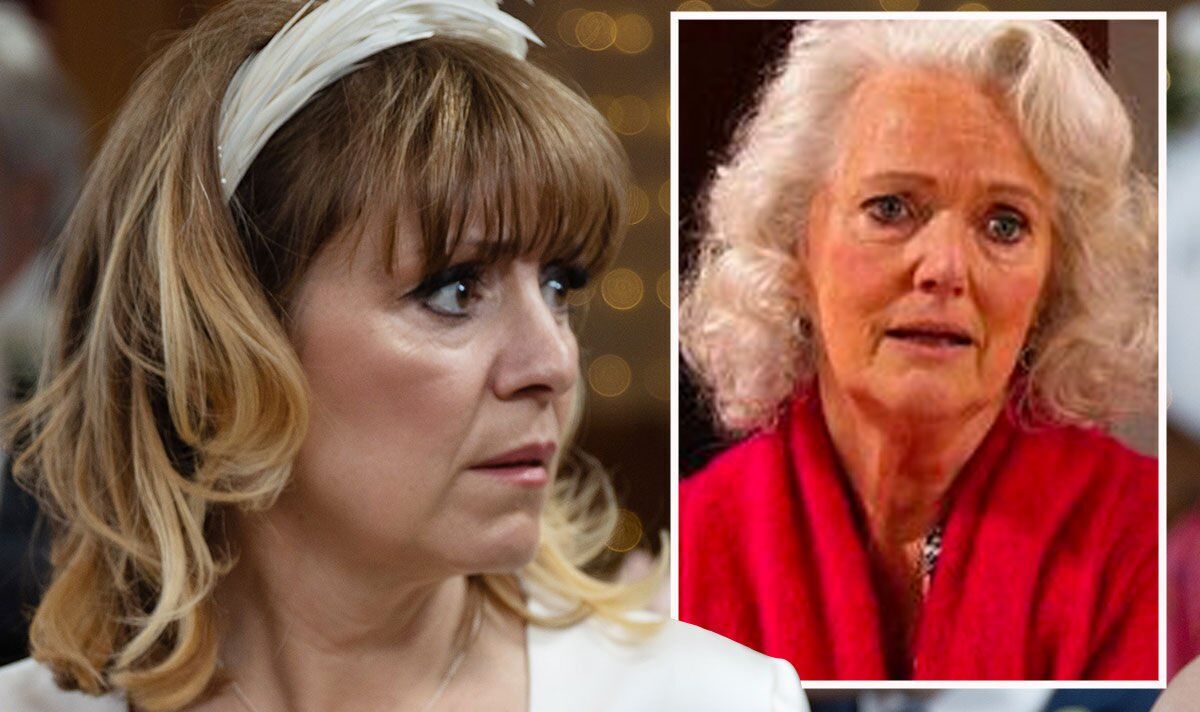 Rhona (played by Zoë Henry) has been waiting for months to marry the love of her life, Marlon (Mark Charnock) after he suffered a stroke earlier this year on Emmerdale. The pair have faced a whole lot of challenges over the past few months but they have been supported greatly by matriarch Mary Goskirk (Louise Jameson), who has been a comfort and a hindrance at times. However, in upcoming scenes on the ITV soap, her more deceptive side could get her in trouble and as a consequence, she could end up leaving the village.

The drama begins as Marlon is surprised by another stag do to celebrate his last few hours as a single man before he marries Rhona.

Having been doing great in his physiotherapy sessions with Kit (Thoren Ferguson), he tries to stand on his feet without any help or support.

Unfortunately, he falls to the ground as his legs buckle under him and Paddy Kirk (Dominic Brunt) demands his friend goes to get checked out at the hospital.

Although reluctant to, Marlon agrees to the demands but he tells his friend not to call an ambulance as he doesn’t want to worry Rhona.

As a result of this secrecy, the bride has no idea her future husband is being rushed to the hospital the night before their wedding.

Despite thinking he will be in and out within a few hours, Marlon is told by the doctors he needs to stay in the hospital overnight.

Having performed some tests on him, the medical professionals explain his blood pressure seems to be extremely high for some reason.

The hours tick past and by the morning of the wedding, Marlon is sure he will make it to the church on time, whilst Rhona is kept in the dark.

Once again, Marlon is dealt a blow when the doctors explain his blood pressure has not dropped and they cannot discharge him.

Paddy remains at the hospital with him and tries to stay calm but it’s clear they are both as stressed out as the other.

Back in the village, Mary is well aware of what’s going on and manages to convince her daughter there is absolutely nothing wrong.

Unfortunately, the bride has a feeling everything isn’t running to plan and Vanessa Woodfield (Michelle Hardwick) is on hand to reassure her Marlon will be at the church.

It could be Rhona is furious with her mother for blatantly lying to her face but before she can do anything, Paddy arrives with Marlon in his wheelchair.

The pair zoom down the aisle, which is not what Marlon wanted as he hoped to be able to walk towards his wife on his wedding day.

It suddenly dawns on Rhona there is something seriously wrong with her future husband but he explains he can continue with the ceremony.

All the guests are emotional as the couple finally ties the knot by exchanging their vows, something Marlon thought he would never do after having his stroke.

However, as the village celebrates the big day, it could be Rhona will have something to tell her mother for lying to her.

As the party is in full swing, Rhona could pull her mother to the side and tell her to pack her bags as she is no longer welcome.

Devastated she was lied to, Rhona could feel she won’t be able to forgive her mother for not telling her Marlon had been taken ill.

After months of supporting her daughter, this could be the end of the line for Mary as she finally makes her exit from the show.

Having reestablished her relationship with Rhona since arriving in the village, Mary could find herself estranged from her daughter once more.

With their relationship in tatters, Mary might not ever be heard of again as it seems Rhona is content with the family she has got.

It seems after this hiccup, however, Marlon will continue to recover and the actor who plays him, Mark, has promised his character will come back to top form.

The actor explained: “It’s a mountain to climb.

“For Marlon, I think in particular, because he’s such a mouthy character and physically expressive person, it’s reducing him down to his eyes, really, is how he expresses himself in the first few days and weeks.”

“There’s also a great deal of hope that things can only get better from where they are,” the soap star told Express.co.uk and other media.

“Also it will inspire them to get their lives back,” Mark added.

What Is The Wordle Answer Today? #409 Hints & Tips For Tuesday, August 2