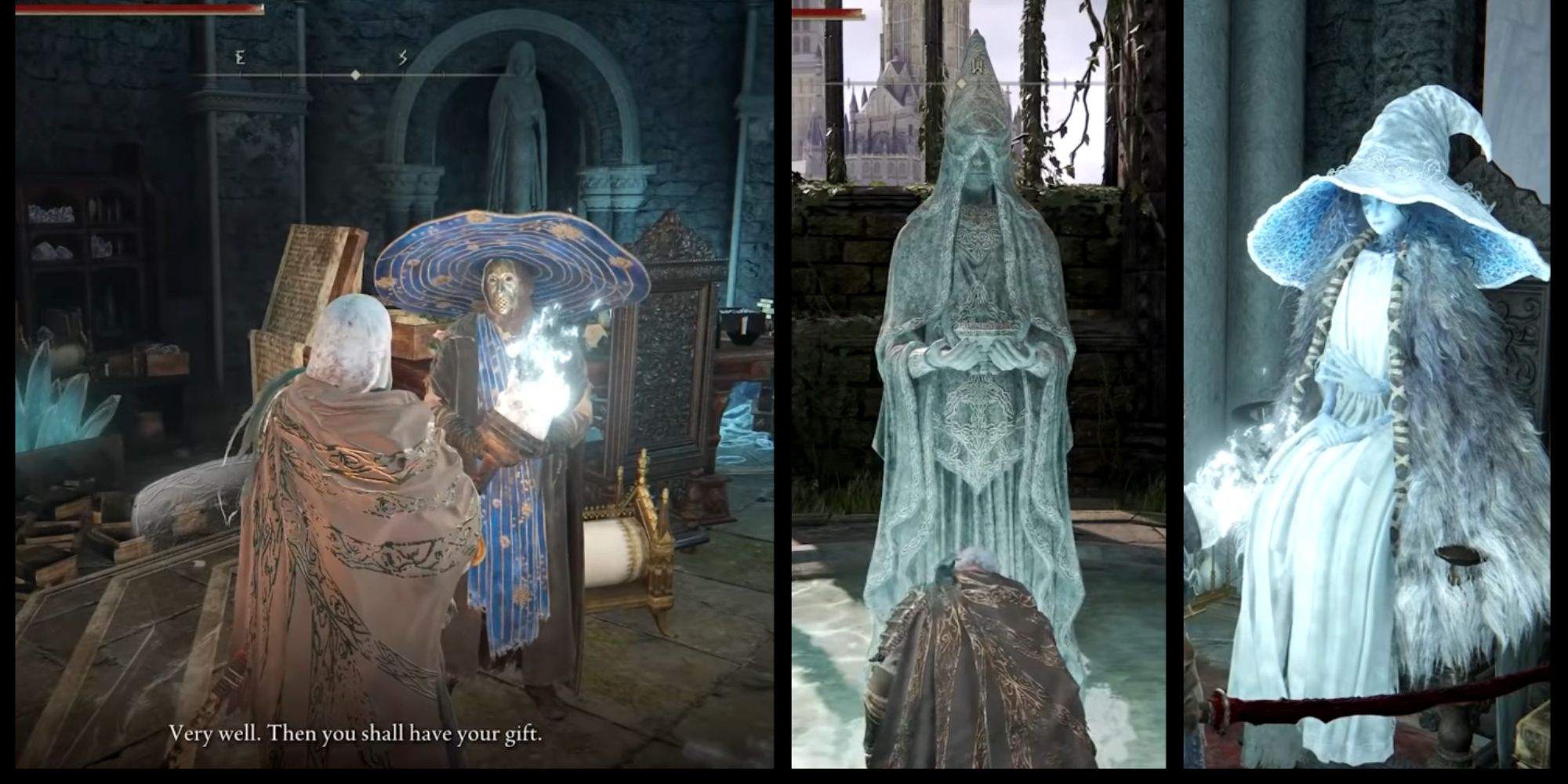 Elden Ring offers a plentiful amount of in-depth questlines. Along the way, you will meet a seemingly unlimited number of NPCs. Some of them you may see time and time again, while some you may never cross paths with again after completing a short request. Seluvis, however, is one of the most important NPCs in the Lands Between.

RELATED: How To Get To Moonlight Altar And Finish Ranni Quest In Elden Ring

Though his questline is treacherous and exacting in what it demands of the player, it is well worth the time and effort. At the end of his questline, you will be rewarded with the Magic Scorpion Charm Talisman, Seluvis’s Bell Bearing, his armor set, and some additional goodies along the way.

Where To Meet Seluvis

To meet Seluvis, you first need to speak to Ranni The Witch, who can be found in her tower in Caria Manor, located in northern Liurnia. Seluvis will tell you to meet him at his tower (Southeast of Rannis’s), where he will task you with finding Nepheli and giving her a potion of his design. Once you agree to go into Ranni’s service, she will have you go downstairs and meet with Blaidd, Iji, and Seluvis in their spectral forms.

How To Use Seluvis’s Potion? There Are Three Options

Once you receive Seluvis’s potion, you now have three options for what to do with it. Option one is to give the potion to Dung Eater (The disease-infested NPC who is originally located at the Round Table), once you have progressed to the point in his quest line where he is strapped to a chair. Option 2 is to simply undertake Seluvis’ request and give the potion to Nepheli. To provide Nepheli with the brew, you must progress her quest line until she is in the basement of the Round Table. Before speaking to her, you will have to speak with Gideon (Also located at the Round Table) and ask about her despair. Only then will you have the option of giving her the potion.

The third and final option is to show Gideon the brew while speaking with him and choosing the verbal selection to provide him with the tonic and dispose of it. Once you select an option, return to Seluvis’s Rise and inform him that you have completed his task.

The Outcomes Of Each Option

After letting Seluvis know that you have completed his task, you will need to locate his hidden chambers to progress through his questline. In order to do this, first, go to Ranni’s Rise and then travel northeast until you find a set of ruins not so far away. Roll around on the floors of the ruins, and a hidden staircase will present itself.

Climb down the stairs into the room and walk to the opposite side, where there will be a gold message that reads “Seluvis’s Puppet Do Not Touch” (if you gave the potion to Nepheli or Dung Eater, you would also find their puppet along with Seluvis’s). Upon reading the message, return it to him, and he’ll offer you a puppet.

Make sure you have a Starlight Shard in your inventory. You will need it to prompt the option to gain access to his puppet shop.Failing this, you’ll need to find an additional Starlight Shard out in Elden Ring’s vast open world (there’s one East of Oridys’s Rise in the Weeping Peninsula) and then return to him. You will now have access to his puppet shop, and if you chose option one or two in the previous step, their respective puppets will be available later on. In order to proceed through Seluvis’s questline, purchase one of his puppets, in addition to all the Sorceries he has available.

After Seluvis cleans out your pockets, you will then have access to the next step. Speak with him again and select the “About The Scheme” option. He will then request that you bring an Amber Starlight Shard back to him. You can find one in a crater northeast of the Altus Highway Junction Site of Grace, in the Altus Plateau (see image above).

Once retrieved, bring the Amber Starlight back to Seluvis. At this point in time, you can stop his little side story with no consequences for Ranni’s own questline. You will have to speak with him twice to get the Magic Scorpion Charm Talisman, which boosts your magic damage at the cost of lowering your defense. The other option is to complete his side story and repair the damage done with Ranni, but you will need some Celestial Dew to do that.

Give Amber Draught To Ranni

After giving Seluvis the Amber Starlight, rest at a Site of Grace and return to him to receive the Amber Draught. Bring the Draught to Ranni and attempt to give it to her. She will be most displeased, and will tell you to leave immediately. At this point, it is advised that you hurry right away to the Church of Vows and perform an Absolution ritual in order to get back in Ranni’s good graces (this is why you’ll need the Celestial Dew).

The deadly end of Seluvis’s questline occurs in one of two ways. If you go to the Church of Vows to absolve yourself of your actions and get back in Ranni’s good graces, she will return to the state she was in before you tried to sabotage her. You’ll also coincidentally find the remains of Seluvis in his Rise, where you can collect his armor set and his Bell Bearing. Note that this will also happen when you’ve given the Finger Slayer blade to Ranni as you complete her questline, so it is definitely worth doing this beforehand so that you can receive the Magic Scorpion Charm.

Once you have completed his quest line, it is recommended that you find the Carian Servant, Pidia, who can be reached by jumping down to a rooftop northeast of Seluvis’s Rise. The servant will drop his Bell Bearing in addition to a doll’s spirit summons. If you gave the potion to Nepheli at the beginning of this quest, you would receive the Nepheli puppet, but if you gave the potion to Dung Eater or Gideon, you would receive the Dolores puppet.

Note that you can still access Seluvis’s shop by examining his dead body, which is distinctly morbid but certainly handy.

NEXT: Elden Ring: How To Enter Lenne’s Rise

PlayStation 5 Firmware 4.03 Has Been Jailbroken