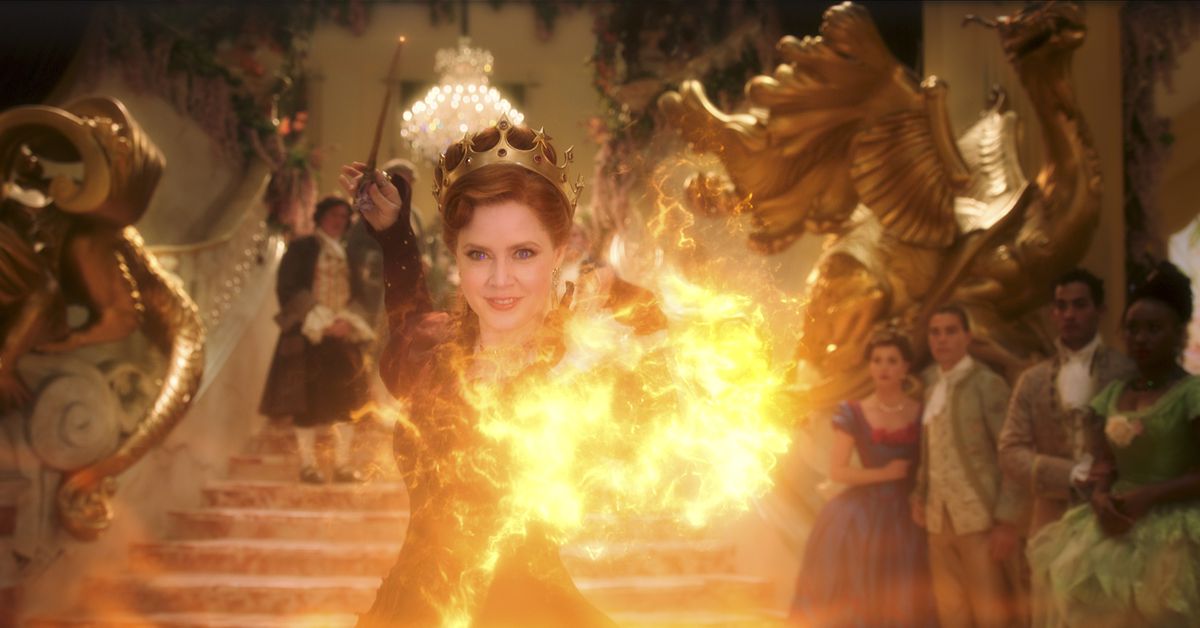 2007’s Enchanted was a cultural reset for Walt Disney Pictures. After years of live-action movie misses, the studio finally just leaned into the fairy tales and sweeping romantic musicals that defined the Disney Renaissance — but this time, with some tongue-in-cheek jokes about the ridiculousness of people bursting into song and dance in the middle of the street and princesses marrying men they met three seconds ago. Enchanted was a delight, and even though its protagonist, Giselle, was never officially added to the Disney Princess lineup (the company would have had to pay Amy Adams in perpetuity for an animated likeness of her, so it backed out), Enchanted certainly influenced the tone of Disney princesses to come.

The sequel has big shoes to fill, especially given the difficulty of focusing on the central couple’s life after their happily ever after. Enchanted’s epic high point, in which Giselle ropes all of Central Park into an infectiously catchy song-and-dance sequence, seems like something that can never quite be matched.

And Disenchanted never fully does. The new sequel on Disney Plus has some fun moments, but it can’t capture the first movie’s originality and magic. Part of that is because director Adam Shankman and screenwriter Brigitte Hales pack too much into the movie. But mostly, the filmmakers never firmly decide whose story this is, and they shift the movie’s emotional arc to a relationship that never quite earns a happily ever after.

[Ed. note: This review contains some setup spoilers for Disenchanted.]

Years after the first movie, fairy-tale princess Giselle (Adams, returning to the role) is feeling a bit unsatisfied with her life in New York City. After the birth of her child, she and her family decide to move to the suburb of Monroeville. While her husband Robert (Patrick Dempsey) is supportive, her teenage stepdaughter Morgan (Gabriella Baldacchino) is upset about the move.

Giselle wants her life and family to be as happy as a fairy tale, but finds that moving to a new home isn’t enough to fix her problems. The town’s most dedicated (and obnoxious) citizen, Malvina (Maya Rudolph), feels threatened by Giselle, and Giselle ends up accidentally embarrassing Morgan in front of her new classmates. After a fight with Morgan, Giselle uses a magic wand to wish their life was like a fairy tale. And poof! The next morning, she wakes up to birds singing, appliances talking, and everyone decked out in medieval fantasy garb. Monroeville is now the fantastical “Monrolasia.” And no one except Giselle seems to remember their past lives.

Everything seems wonderful, until Giselle realizes her fairy-tale wish is slowly turning her into an evil stepmother — the villain in Morgan’s story. Each time the clock strikes a new hour, Giselle’s alter ego starts to take control, in a pixie-dusted twist on Strange Case of Dr. Jekyll and Mr. Hyde. If she can’t reverse her wish by midnight, she’ll be stuck as the villain, making Morgan’s life miserable, and any attempt to repair their family bond will be completely lost. Meanwhile, Malvina, who has naturally become the evil queen in this fantasy version of the town, is out to steal Giselle’s magic wand for herself, so she can continue to be the most powerful person in town.

Also, if the wish becomes permanent, then all the magic will be sucked out of Giselle’s homeland of Andalasia, meaning Giselle and her Andalasian friends will cease to exist. That’s a lot to pack into one movie, which means that Robert is reduced to wandering around town waving his sword and looking for fantasy creatures to fight. He takes a huge back seat in this movie, which is more about Giselle coming to terms with her relationship with Morgan.

But for a movie that’s so intrinsically tied to the mother-daughter relationship, Disenchanted doesn’t do a good job of showcasing it. For one, Morgan never really gets to be her own character or share her side of the relationship. She’s just a surly teen who dislikes her stepmother for an unspecified reason, even though they were once close. It would be one thing if the movie just focused on Giselle trying to rebuild that connection, but Giselle warps into her evil stepmother persona about halfway through, making Morgan the protagonist.

From there, the movie splits: Morgan tries to find a magical solution in Andalasia, and Giselle tries to usurp Malvina as the big bad villain of the story. The latter plot line is stronger: When Giselle and Malvina get to be gaudy villains, belting out big evil songs and openly scheming, the movie is good fun. It’s been a while since Disney has committed to putting a proper old-school singing villain on screen, and both Adams and Rudolph absolutely commit to their roles. Adams in particular does a fantastic job of switching between her sweet, kind princess persona and her scheming stepmother personality.

While the villain song is a jazzy good time, all the other numbers more or less fade into homogeneity. None is as particularly grating as Idina Menzel’s big solo, which takes place when Morgan is in the animated world. For one, it’s incredibly generic and corny, and frankly, a waste of Menzel’s powerful voice. But the greater crime is just how bad the animation looks. In the first movie, the animated scenes were on par with a Disney theatrical release. But this time around, they’re janky and look more like the Carrie Underwood scenes in the music video that came out with the first movie. It’s not just a quick scene either; this is where one of the biggest most emotional points of Morgan’s arc happens, and the choppy animation undermines what could be a moving moment about the power of memories.

In “Monrolasia,” though, everything from the costumes to the set design is charmingly over-the-top. Filtering regular suburbia through a fairy tale makes for some puckish moments. The gossipy barista becomes the magic mirror, and the town festival becomes a ball, naturally. Morgan’s room becomes a tiny hovel at the top of a tower, because as the stepdaughter, she’s the mistreated, big-hearted heroine of the story. When the filmmakers play around with these fantasy conventions — particularly the superficial elements that make a villain a villain and a hero a hero — the movie is delightful.

Unfortunately, when Disenchanted pivots to Giselle and Morgan’s relationship, it doesn’t go deep enough to really pull the ending together. And that’s a great pity, considering what a bad rap stepmothers get in fairy tales. The first movie focused on dismantling storybook-romance conventions like love at first sight, so shifting the focus to the evil stepmother trope and the mother-daughter relationship would be a great evolution. But that arc is never explored at the depth it needs in order to land emotionally. Instead, the focus is more on the superficial suburban squabbles.

Disenchanted has some wonderful moments, but it all feels surface-level and uneven. If the story was just about Giselle trying to find her place in this new community and butting heads with Malvina, the more superficial aspects would make sense — after all, those are the shallow reasons Malvina feels threatened by Giselle in the first place. But the intended-to-be-moving family arc misfires, simply because we never actually see much of that relationship. In the end, Disenchanted is just an echo of Enchanted — the songs sparkle less, the emotional climax doesn’t hit as hard. The magic sputters, bringing back some of the original movie’s fun, but definitely not enough of its heart.

Disenchanted is out on Disney Plus now.