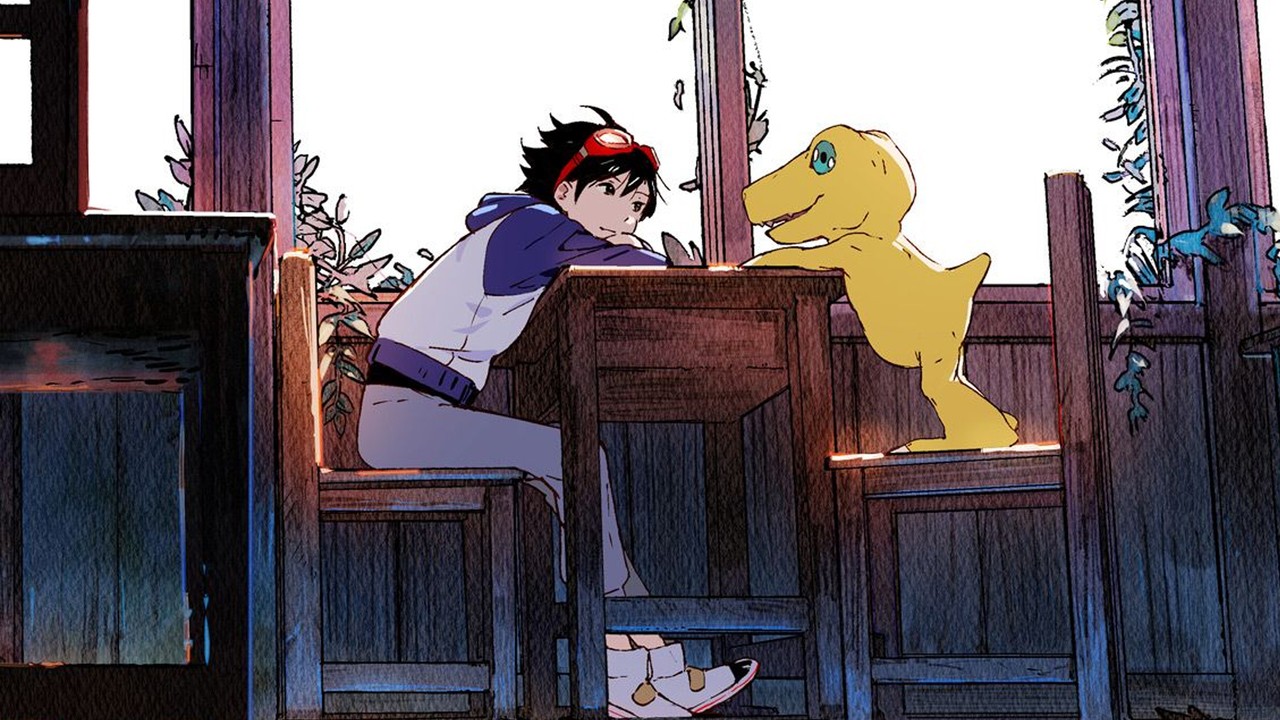 Digimon Survive is not the RPG that some fans wanted it to be. Recruiting, training, and battling Digimon takes a backseat in favour of a very text-heavy story that unfolds through largely static scenes. In short, this is a visual novel first and foremost, to the point where some of the title’s RPG elements almost start to feel like they’re tacked on.

You’ll probably know whether Digimon Survive is for you from that opening paragraph alone — but even if you have been waiting on an experience that’s more in line with past titles, like Digimon Story: Cyber Sleuth, you shouldn’t write Survive off completely. As far as Digimon games go, this is a fairly unique take on the property, honing in on a darker story that often surprises with its sinister themes. Get through the plodding first few chapters, and you’ll find an engaging narrative.

The plot, of course, revolves around a group of high school students who find themselves trapped in a mysterious ‘otherworld’ — which just so happens to be inhabited by the titular monsters. Fortunately, the hapless teenagers are quickly partnered up with friendly Digimon, who swear to protect their new masters. Fans of the animated shows will immediately recognise this premise, but in not being bound to 20-minute episodes, the game is able to take its time in establishing its characters and their relationships with one another.

The ways in which the students’ personalities bounce off their Digimon is a highlight. The creatures are a quirky, inquisitive bunch, with only a limited understanding of how humans live — yet they’re committed to ensuring that their newfound allies, er, survive, and find a way home. In truth, the partner Digimon steal the show, with dialogue that’s often comically blunt or endearingly daft. The enjoyable dynamic that forms between the beasts and the teenagers only gets better as the game goes on.

The plot itself will keep you guessing, even though the pacing can feel glacial at times. In typical visual novel fashion, the writing can seem longwinded — especially in scenes where every character feels the need to chip in — but it’s the game’s exploration sections that really start to grate. In order to progress the story, you’ll often have to point and click your way through environments, picking out details or talking with specific characters. There tends to be a lot of backtracking during these scenarios as you check every little thing just to make sure that you didn’t miss a vital clue or a secret that might alter upcoming events. Slow, but bearable at best — frustratingly tedious at worst.

There is some welcome player choice peppered throughout the adventure, though, which helps keep things interesting on an interactive level. Your main character, Takuma, is a bit of a blank slate in terms of personality — a distinctly average high school student, as described by the game — so you get to shape his outlook through your actions. Alongside decisions that impact the story directly, you’ll increase individual friendship levels with your fellow students by siding with them during debates. What’s more, your choices typically influence three traits that determine Takuma’s state of mind, and in turn, the new forms that your Digimon can take.

Digimon evolution — or digivolution — is a concept that’s introduced early on, and it plays a major role in combat, where temporary evolution leads to significantly increased stats and better attacks. Discovering new digivolutions is a highlight as you progress, and adds some weight to your aforementioned dialogue decisions. It’s a good system, but unfortunately, it gets a bit buried beneath bog-standard tactical battles.

Combat takes place on a grid, with your Digimon team facing off against less amicable monsters. Everything’s turn based, and positioning is important, as attacks from the side or behind deal additional damage. It’s all quite straightforward, and seeing your digital pals gain experience and grow stronger is as addictive as you’d expect, but the system as a whole ends up feeling somewhat stunted. It never branches out from the basics, with digivolution being the only aspect that adds genuine spice to proceedings.

And it doesn’t help that encounters are so few and far between. There are optional battles that you can attempt at any time, but they’re rather mindless — little more than a way to boost your Digimon’s levels in between story-based brawls. As it stands, combat mostly serves its purpose in providing respite from the dialogue-heavy plot, but it very rarely excites, and certainly shouldn’t be considered a key selling point of the experience.

Digimon Survive’s uniquely dark take on the standard Digimon storyline is enough to carry a title that’s sometimes poorly paced and basic in its approach to gameplay. A visual novel with RPG elements bolted on, it’s difficult not to feel as though the creature taming and combat aspects of Survive could have been bigger and better. But ultimately, a mix of endearing characters and eye-opening plot points make this another worthwhile adventure in the digital world.

Christina Ricci says she “regrets so much” about the ‘90s

Day Shift review: Netflix’s vampire movie has some of the year’s best action

Arcade Paradise review: wash clothes and play games in this feat of grime-caked…