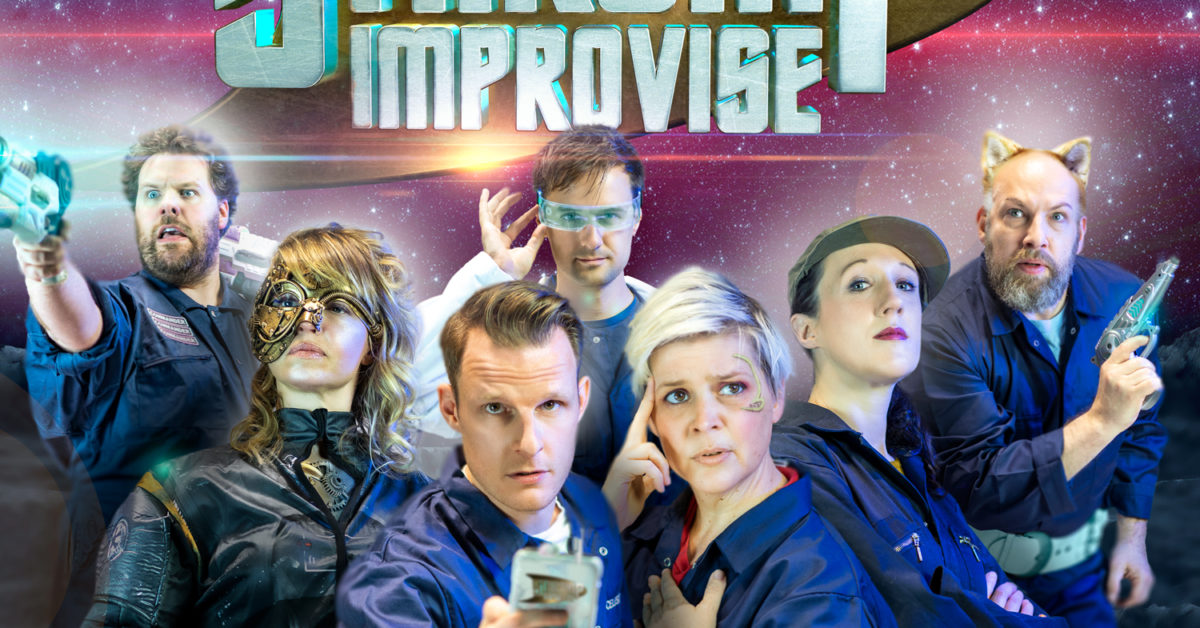 So, I am a hell of a fan of Mischief Theatre, the folks behind the Goes Wrong shows, A Comedy About A Bank Robbery, Groan Ups, Mischief Movie Night and more. I have also thoroughly enjoyed the Jane Austen improvisation show Austentatious in its various forms, in which they stage an adaptation of a newly discovered Jane Austen novel every night. And while I haven’t seen the improvised musical show Showstopper The Musical, I have only heard good things.

Tomorrow they all come together in what Bleeding Cool is dubbing the Avengers Of Improvisation Shows, as a super-improv-group of stars from all three productions assemble for a new improvisation show for the Edinburgh Festival Fringe, Starship Improvise, starting tomorrow. And I got to talk to Mischief Theatre founder member and star Dave Hearn about the show and his role in it.

CELESTIA 7 was a long-running, smash-hit, science-fiction TV show. Some of the cast became international celebrities, others faded into obscurity. Now, headlining at a fans’ convention, the actors reassemble to share memories of everyone’s favourite episodes. Improv superstars from Mischief, Showstopper! and Austentatious, all experts in the form, will join together to create a different episode of a Star Trek-style-drama, inspired entirely by audience suggestions. Which planet will they go to? Which aliens will they encounter? What adventures will they have? Conflict with cyborgs? Sent back in time to Victorian London? Clones? The audience decides, and a full episode is played out before their very eyes.

All the while the actors at the convention offer commentary upon how that night’s episode was made, and we get to see how backstage politics and tensions spilled into the show itself. While CELESTIA 7 followed its plucky crew on their adventures through time and space, the real drama often lay behind the scenes. In-fighting, relationships, break-ups, sexual tensions, ego… it was years and years of science friction. Boldy pushing the improv envelope to a place it’s never been before, each show is a stand alone episode AND recurring characters will develop relationships throughout the run as the soap opera unfolds. Audiences can return to multiple shows to catch up with favourite characters and all the gossip that has happened along the way.

And it was that aspect that most fascinated me. With the improv shows Austentatious and Mischief Movie Night, they start afresh with every show, but with Starship Improvise, there is a continuity set up between each show, what Dave Hearn describes as “soap opera elements” beginning with the London rehearsals and following into the Edinburgh shows. If you see multiple shows, not only will you get a story reflecting audience suggestions of that night, but they will reflect what happened in previous improvised sessions. “So each episode isn’t directly leading on from the previous one, but everything that’s happened in the episodes before is part of the world we have created, and we can use it for future episodes… if you see multiple shows, you will get a greater, fuller narrative.”

I worried how they could keep all this in their heads. Improvising in the moment is hard enough, but to carry an increasing and growing back story with them, is Dave mentally ready for this?

“Oh, always”. Dave told me that director and co-star Adam Meggido, creator of Showstopper and director of many Mischief productions, “typed up synopses of each episode, to remind us of the different alien races, the people we’ve met, what we’ve done, each episode you can just kind of gently remind yourself, which is nice as improvisers, you have stuff you can call upon, while at the same time generating something new. It’s just a different style… I said to Adam, looking back at the synopses, these look like genuine episodes of something, it’s amazing.”

So who is his character – and the character his character plays in the show? “I play the actor Dave Heron, who is basically me, they are always basically me, who plays Doctor Richard Vitamins, and ex scavenger and pirate, happy go lucky, a bit like Marvel’s Star-Lord, who is rescued by the crew of the Celestia 7 and becomes their doctor but who has no medical knowledge whatsoever, he just relies on sci-fi technology.”

I asked if the show would reflect the warring egos of actors familiar in the Goes Wrong shows, and there appears there will be less of that, reflecting a gentler tone to the show than in some of Dave’s previous work. “We keep going back to the actors, who can comment that someone was moving house or going through a nasty divorce during this scene. In rehearsals, Charlotte [Gittins from Austentatious] had jet lag, so we incorporated that into a scene, saying that while she was recording that scene, she clearly had jet lag, and she played up to it.”

I wanted to know more about this change of style and if it was anything to do with working with other long-established improvisers from different shows, a kind of supergroup or Avengers of improvisation. “Well, Adam taught us improvisation, so we are on stage with our mentor, as well as others we admire. I think coming out of this, we will be more mature performers. I spend most of my life trying to wind up [fellow Mischeif founder] Henry Shields, this is more story and character-focused, a chance to work differently. We returned to Mischief Movie Night in a more relaxed way; I’ve learnt from Bruce, Adam and Charlotte to sit in scenes longer and let them breathe. In Mischief Movie Night, you have so many ideas, and then you never have a way to end it; you have to rush the last ten minutes to find a perfect ending.” While Starship Improv is less frantic, and gives greater scope for the cast to find that perfect ending.

This is not Dave Hearn’s first foray into science fiction, of course. JJ Abrams of Star Trek and Star Wars became a big fan of the Goes Wrong shows and co-produced The Play That Goes Wrong when it came to Broadway, as well as the original London version of Magic Goes Wrong. And when he is in town, he often meets up with the Mischief Theatre mob. So Dave and others asked Abrams if there could ever be a part of them on Star Wars, though “maybe you don’t want f-cking clowns.” The call came for Star Wars and Dave was available. JJ Abrams had written a comedy scene for Stormtroopers. “I didn’t know I had a scene until the day; I was happy just background gun acting. We talked an hour or two before the shoot and broke down the comedy beats.” And oh, look, it’s on YouTube. I think that’s Dave on our left, his right.

So what continuity has been set up so far? What previous shows have been seen that might factor into the Edinburgh shows? “My character has a bounty on his head, hunted by the Imperium, race of judge, jury, executioners. And they are called Judge, Jury, Executioner… and Steven. There was an alien planet with sentient plant life that heightened emotions. The ship was taken over by science, who made the air sentient and a bit like Gene Kelly. It removed itself from parts of the ship, to hold the crew hostage. There was the planet run by a god who took people’s DNA to shapeshift, along with their memories.” What show you’ll get, if you see it, will be something else entirely. The anomaly or holograph deck period of your choice!

Starship Improvise runs at the Edinburgh’s Pleasance Dome (King Dome) from tomorrow at 3pm every day, from Saturday the 6th of August until Sunday the 21st of August, with no days off. That’s sixteen shows worth of continuity to catch up on if you are in town. Tickets can be booked here. This may also be your only chance, Dave tells me that the show is more of an experiment, it may be hard to get this group of performers together again. “We’d need someone to come along with the money”. Um… JJ Abrams? This one is for you.

Dave and the rest of the Mischief Theatre have an even busier Edinburgh than this, Dave is taking part in the Mischief Movie Night every evening, Henry Lewis and Jonathan Sayer have a Mind Mangler: Member Of The Tragic Circle show reviving the character from the Magic Goes Wrong show with 80% new material, and Charlie Russell has her own show, Charlie Russell Aims To Please which Dave describes as “remarkable, a new style of comedy, that’s charming and heartbreaking, a brave, intelligent show.” Basically, if you are in Edinburgh, Mischief and friends have you covered. Set your improvisation to stun…

Adam Meggido (Showstopper!) is director of Mischief Theatre’s best known and Olivier nominated comedies such as Peter Pan Goes Wrong and Magic Goes Wrong and consultant on Mischief Movie Night and A Christmas Carol Goes Wrong (BBC). Ruth Bratt (Showstopper!) is in all three series of BAFTA-winning show People Just Do Nothing (BBC2). She is a regular guest with The Comedy Store Players, is part of The Glenda J Collective and guests with Whose Line Is It Anyway? Live and Paul Merton’s Impro Chums. Henry Shields (Mischief), co-wrote and has appeared in many Mischief Theatre shows including Olivierwinning The Play That Goes Wrong and Olivier nominated The Comedy About A Bank Robbery, he also appeared on screen in The Goes Wrong Shows. Nell Mooney (Showstopper!), has appeared in Humana Festival of New Plays (Actors Theatre of Louisville), Diary of a Teenage Girl (Off Broadway); film credits include: Enchanted, Hyde Park on the Hudson; television includes: The Eichmann Show (BBC2). Dave Hearn (Mischief) is a founding member of Mischief Theatre. Recent credits include: The Play That Goes Wrong, The Comedy About a Bank Robbery, Peter Pan Goes Wrong, The Goes Wrong Shows (BBC1). Henry Lewis (Mischief) is artistic director of Mischief Theatre. Recent credits include: The Valiant Quest of Prince Ivandoe (Cartoon Network), Mischief Movie Night-In (format co-creator/producer – live stream). Outside of Mischief Henry produced and performed in the critically acclaimed West End revival of Philip Ridley’s Mercury Fur and is the creator and founder of The Mystery Agency. Charlotte Gittins (Austentatious) is an actor, documentary-maker and BAFTA Rocliffe-winning writer. A seasoned improviser she is half of critically acclaimed double act Folie à Deux, and on

Square Enix Is Potentially Looking To Sell Stakes In Its Studios

Brian Bendis’ League Of Extraordinary Mythological Figures, The Ones