Chex Quest is a nutritious part of this balanced breakfast

Breakfast cereal marketing is a brutal battleground. At least it was in the ‘90s when I’d wake up to watch my Saturday Morning ads, briefly interrupted by cartoons. The commercials themselves often depicted violent acts of robbery and betrayal, as well as straight-up prejudice against adults, leprechauns, and lagomorphs. We watched heartbreak televised every morning.

It was a lot of childhood seduction. This competition to try and lure children to a particular concoction of fortified grains and sugar. The most entertaining characters, the slogans that burrowed the furthest into our grey matter, the concept of having fun at breakfast. Cookies for breakfast? Reese for Breakfast!?

Then there were prizes, and while they were normally very lame during my childhood, that all changed in 1996 when someone at Ralston got a genius idea: video games in cereal.

Imagine it: mom or dad comes home with the groceries, you check what cereal she got, and there it is: Chex Quest. This wasn’t some box-top that you had to mail in, it was a CD! In the box of Chex!

I never ate Chex. To this day, I’m not sure if I have ever tried Chex, but when those commercials for Chex Quest hit, I needed a box. My mom didn’t fall for it, though. That’s fair, I guess, because I really only wanted the game, so she might have been throwing out a perfectly good box of cereal.

The point is, it worked. I was obsessed with Doom in my pre-adolescent days, and this game looked sort of like it. There’s no wonder; it was a total conversion, featuring five levels. The whole thing was dressed up to be family-friendly. None of the weapons resembled actual guns, though their usage was directly pulled from Doom. You didn’t kill enemies, you “zorched” them back to their own dimension. It largely still plays like Doom, just with the difficulty dialed back a bit.

The story involves a race of snack-eating monsters called Flemoids invading some sort of space laboratory. You’re the Chex Warrior, who must use their zorchers and a well-balanced breakfast to send the Flemoids back to their own dimension.

I feel like Chex Quest is a bit of a breath of fresh air compared to Doom. Don’t get me wrong, I love that ray-casted, demon-busting FPS with all my heart, but I was never a fan of its aesthetic. The levels were very abstract, just a bunch of corridors and open spaces with grimy wallpaper. Sure, you were in a lab built on Phobos, but it didn’t look that way at all. You could have told me it was the stockroom of a 7-Eleven, and I’d have said, “yeah, that makes sense.”

Chex Quest not only delivers a blast of color, it also has context for its levels. A spaceport, a lab, an arboretum. Despite the fact that the premise of fighting snack fiends on a distant planet is ridiculous, it added a level of believability to it that wasn’t present in Doom. Whether or not the level design is comparable is a bit more debatable, but for the purpose of appearance, I’m not complaining.

Five levels don’t last very long, even if you crank up the difficulty. But it was free! In 1997, the same marketing company, Digital Café, put out a second episode, free to download from the Chex website. This one takes place in Chextropolis, which allows for some interesting city levels that, once again, aren’t as abstract as what you’d find in Doom II (that was supposed to be Earth?) Apparently, when it was first released, the second episode’s level design was butt, but it was revised when the third episode was released.

Yep, there was a third episode, it just arrived a bit late. The Chex Quest promotion technically ended not long after the release of the second episode, which I presume had something to do with General Mills buying up the product line in ‘97. Nonetheless, the developer reunited and released a third episode in 2008 as a gift to the passionate fanbase.

This one was set 10 years after the second episode. Planet Ralston gets invaded by the Flemoids and its up to Chex Warrior to save the day, yet again. It feels pretty true to the previous episodes but seems a bit more spiffy. This is probably because it was built in the ZDoom sourceport.

Don’t let me oversell Chex Quest’s gameplay. It’s a shadow of Doom, but it’s still weird fun. It’s not as ambitious as something like Strife, but it was also made as a cereal box prize. With that in mind, it’s a lot better than it has any right to be. It’s obvious the people developing it had aimed higher than “good enough for cereal” and made something that’s actually fun.

This was also only the beginning of a trend of putting PC games on cereal boxes. Out of curiosity, I hauled my old CD wallet out and found a trove of the Cereal Box games. Clue, Scrabble, Life; maybe not very exciting, but it progressed to games like Monopoly Tycoon and I’m pretty sure you could get Roller Coaster Tycoon and Age of Empires for a time. It faded out, but around the turn of the millennium, you couldn’t walk down the cereal aisle without seeing these things plastered to the front of boxes. 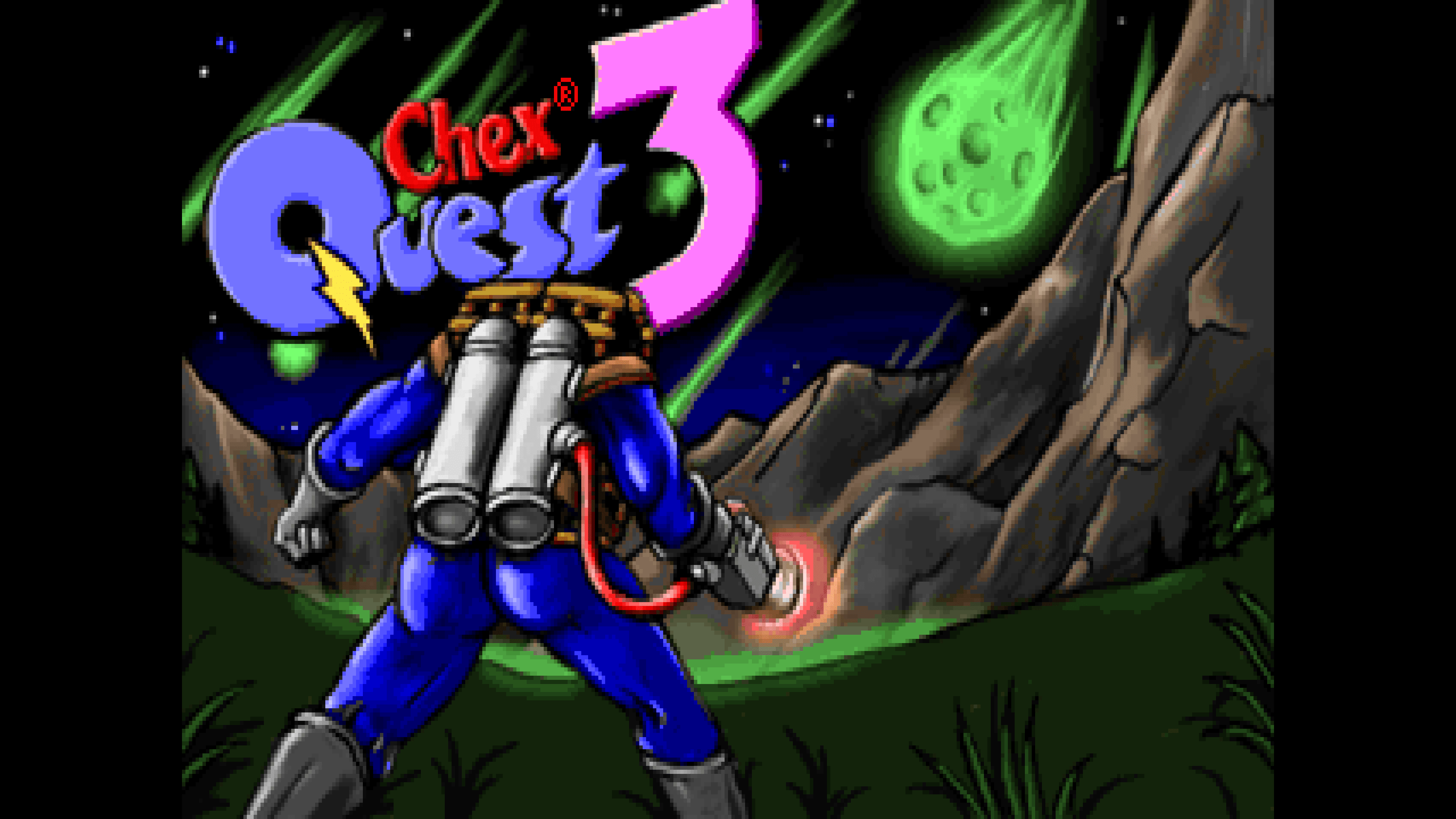 I didn’t actually play Chex Quest until my Doom-obsessed college days. I was cramming WADs onto my USB drive to play in between classes, and if it wasn’t The Battle for Helms Deep or Ghostbusters Doom II, it was Chex Quest.

While the third episode was considered “unofficial” originally, General Mills relaunched it in an official capacity. It’s the easiest way to play it now, but you can also take the WAD files and load them into GZDoom or, as the community likes to do, Brutal Doom. However you play it, it’s worth the afternoon it takes to blaze through the episodes.

An HD remake was released in 2020 with the permission of General Mills called, predictably, Chex Quest HD. Like the original, this one is free and consists of five levels. Built on Unreal Engine 4, it certainly looks the part, but it’s maybe a bit less exciting than its 1996 counterpart. It still gets updated, and now there’s a co-op multiplayer mode, so that’s nice. Still, you can’t argue with free, and it’s a nice homage if nothing else. Something’s missing, though. It feels like it needs to be printed on a DVD and stuffed into a box of cereal.

Zoey is a gadabout gaming hobbyist. She’s been playing video games all her life and is a lover of both new and retro games. She enjoys digging in the dirt and picking out the games that are perfectly fine if you clean them up a bit.

The Science Behind Grilling the Perfect Steak |Innovation