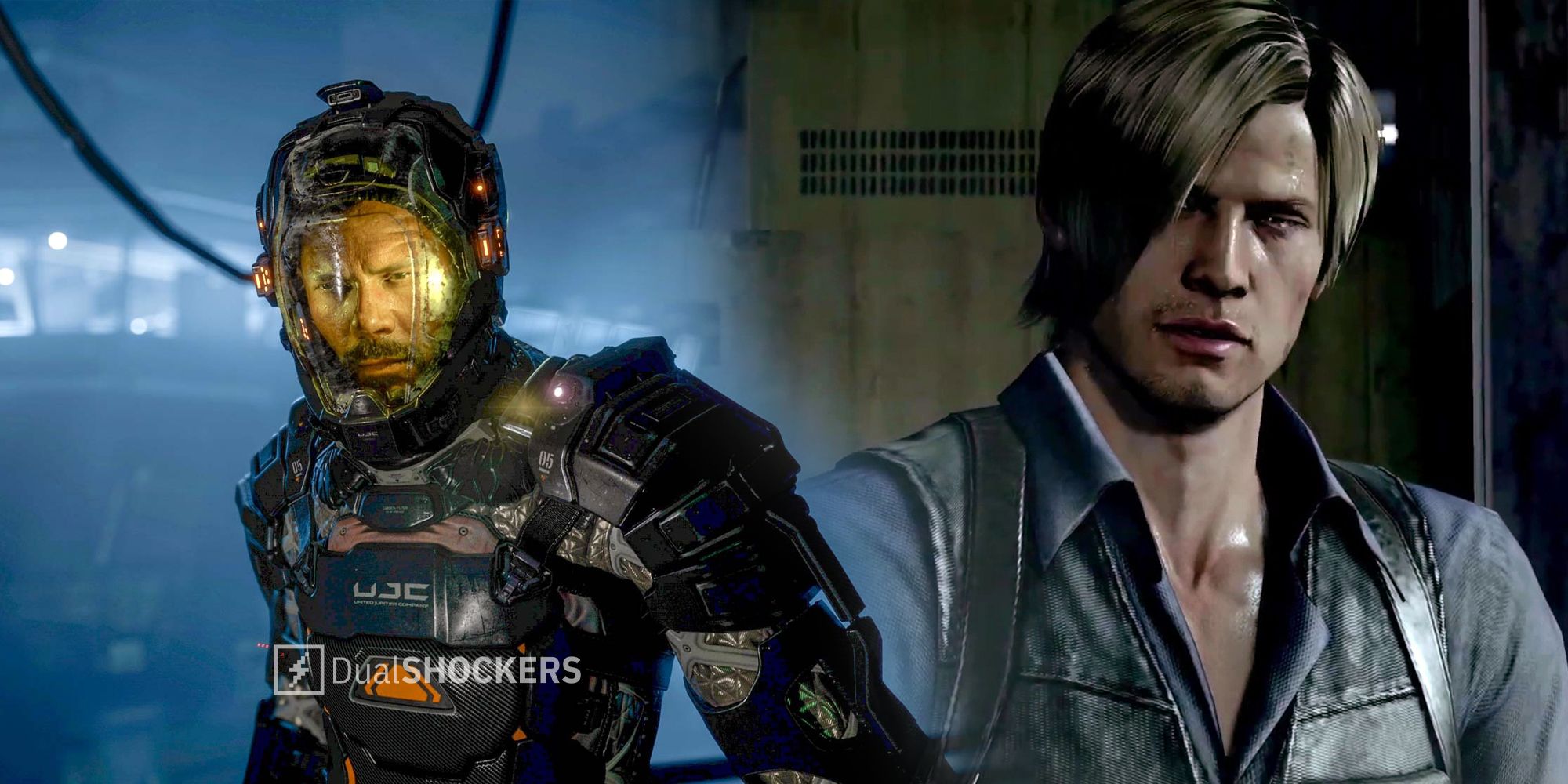 It’s no secret at this point that I did not care for The Callisto Protocol. Yet despite this, I was fixated on it in the back of my mind, my inner Benoit Blanc unable to let it go. Such a misshapen, poorly designed game from the minds of Visceral Games’ founders… it confounds me, and compels my inner critic in equal measure. Though replaying several hours of it didn’t make me like The Callisto Protocol, the experience was illuminating. I even devised a way to make it fairly playable, if not profoundly engaging.

That’s the trick with The Callisto Protocol. The one sentiment that’s echoed across every conversation I had on it – that you can’t just patch The Callisto Protocol into being a good game. Why, though? What’s missing? Well, a central core, which it lacks. There are a bunch of ideas thrown around, but they don’t congeal into something engaging. Instead, they weirdly echo, and miss the point, of a game I coincidentally played last year: Resident Evil 6.

Think about it. The mixture of melee and ranged combat, the linear level design, over-the-top conspiracy plot carried off by scene-chewing villains, a holographic HUD with minimal inventory space, dodges, takedowns, and even a more scripted version of the quick-shot system. The difference here is that none of it adds up to anything. Resident Evil 6, on the other hand, while not scary in the slightest, holds up marvelously. It’s a beautiful seed of action-survival gameplay that flourishes into four distinct campaigns.

Meanwhile, The Callisto Protocol never really presents a single thesis. None of its elements feed into the central loop of dynamic third-person action. Other than a scripted prompt to tap the fire button after finishing a combo, the guns and your baton are two totally different styles of combat that require a deliberate swapping animation before switching. The dodge system tries to be simple but relies on far twitchier enemy animations, while making Jacob move like a geriatric Geralt of Rivia. Healing, even with the sped-up animations, requires you absurdly sit in place to apply a medkit clearly made to be used while mobile. Everything is clunkier, operating off the assumption that horror games have to be clunky and awkward to be scary.

To be clear, there’s absolutely something to be said for horror games that disempower the player. The reticule sway of The Evil Within and The Last of Us, stamina meters, fixed camera angles, and tank controls are all valid, but those games are built with those hindrances in mind. Enemies in Dead Space certainly charge you, but they’re often spawning twice as far away from Isaac than the Phage do from Jacob. Even the level of linearity on display isn’t necessarily a bad thing, but there’s no masterfully crafted encounters that couldn’t have been achieved with a few side hallways to give the player incentive to explore. There’s no clear purpose for these additions.

Compare just the core combat loop here with Resident Evil 6. Each has you managing limited ammo across several weapons by engaging in melee whenever possible, and dodging enemy attacks skillfully. Resident Evil 6’s melee combat isn’t about combos, but stunning enemies into very clear animations to chain into takedown moves. It’s not about how many times you punch them, but if you press a single button prompt at the right angle, which is easy to accommodate since you move very quickly. You can even chain one move to hit several enemies if you’re really clever, making for a potent, valuable system.

Except you can’t abuse it – you’ve only got so much stamina, and if you burn through it all, it takes even longer to regenerate. So even though you technically have unlimited melee attacks, there’s a limit to how many quick attacks you can pull off in succession. Each character carries a melee weapon they can use regardless, some even featuring additional attack options like Sherry’s stun baton, but you’re slower and more vulnerable using a weapon without burning stamina.

In The Callisto Protocol, if you swing your baton like a maniac for long enough, Jacob will briefly get tired, but will for the most part keep wailing constantly. I had a room where over six enemies spawned in one go, and mashing my right trigger while I waggled my left stick hectically got me through. Yet if you dodge in Resident Evil 6, it’s also a committed action, sending you prone to the ground, granting you new options – like rolling left or right and opening up with your firearms. This isn’t even getting into how you can chain a sprint with a dodge to slide, giving you additional breathing room. While it technically requires two buttons to achieve, enemy attacks are timed accordingly, giving you enough time as they wind up for you to make a snap judgment.

Tying this all together in Resident Evil 6 are your guns, which you can swap between rapidly, but are still precious to you because of how they each lean into specific specialties. The elephant gun and the standard pistol might both be handguns, but the former is a mini-boss breaker with precious few rounds, while a regular sidearm is just that – a decent all-around weapon. They might lack the flair of Dead Space’s sci-fi weaponry or the weirdness of Fatal Frame’s camera-centric arsenal, but the weapons in Resident Evil 6 have roles to serve.

The Callisto Protocol has… two shotguns, two pistols, and an assault rifle. If you consider that the second pistol is a midpoint between your starting pistol and the assault rifle, it’s not unreasonable to view the rifle as an endpoint upgrade for the pistol’s function as the rapid precision weapon. That means, regardless of if you’re using every gun available, you’re really choosing between two options the entire game when it comes to ranged combat.

That limit in scope extends to your opponents, who evolve like Resident Evil’s J’Avo, except instead of new forms with unique abilities, the Phage just regrow their limbs and take more damage if you don’t kill them quickly enough. I’m not exaggerating, that’s all they do. A J’Avo can grow wings if you shoot out their legs, a shield or tentacle arm, or even mutate into an entire new organism, while still capable at times of wielding modern weapons, and all they have is a modified strain of the T-virus. The Phage have an alien virus that forces rapid evolution, yet just creates the same zombie with slightly different characteristics.

It all begs the question of Callisto Protocol: Why are we here? What does it all add up to? I’m reminded of how Yahtzee Croshaw described The Evil Within when it was first released – when he pictured a developer asking the project lead what sort of horror The Evil Within was supposed to be, only for the lead to respond “Didn’t you hear me? Horror! Horror! Horror!” Yet even Tango Gameworks’ most troubled project had a goal it worked towards, it’s just kept out of reach as a twist for the end of the first game. There’s nothing like that for The Callisto Protocol. The sole revelation about attempts to force human evolution doesn’t tie into anything else you engage with.

The result is a shell of a game with systems stapled on rather than integrated. All the worst options of action and horror melded together when a perfectly good template already exists. That’s why I, and others like me, fear that even the planned DLC expansions won’t be enough to fix up. Even a middling game typically has a strong foundation, but if The Callisto Protocol is to keep evolving… it needs to figure out what it’s even about before there’s any further talk of being a franchise.

NEXT: The Death Of Scavengers Shows You Need Identity To Survive

A Space for the Unbound Review (Switch eShop)

Will We Get Punisher Vs The Marvel Universe In Two Months? (Spoilers)