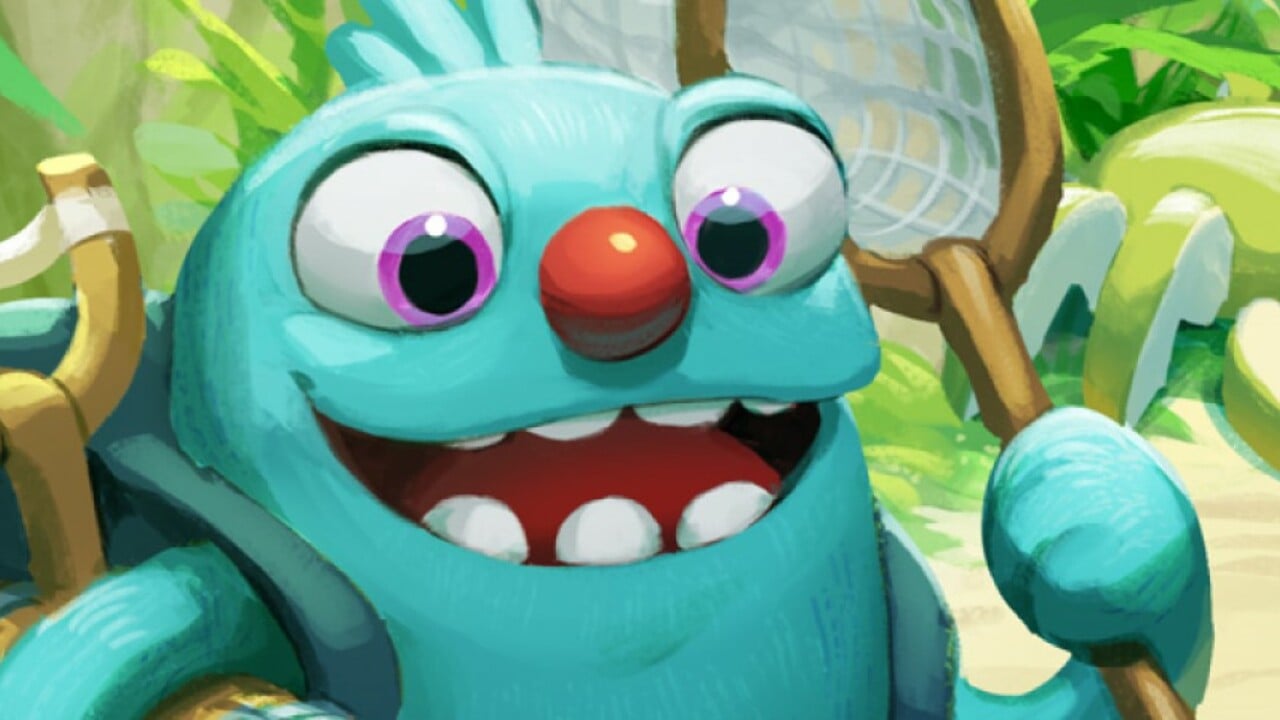 Ever since Bugsnax was announced for PlayStation systems back in 2020, the game has grabbed people’s attention like few others. With plenty of merchandise and its catchy theme song, it seemed as though the googly-eyed strawberries were everywhere despite being Sony-exclusive at the time. Now, a year and a half later, the game has finally made the jump to Nintendo’s console, launching alongside the free Isle of BIGsnax DLC. However, despite all the excitement, Bugsnax unfortunately doesn’t quite stick the landing on Switch.

In Bugsnax, you play as an unnamed journalist on the verge of being fired. After receiving an invite from an explorer named Lizbert to visit the mysterious Snaktooth Island, you set out to discover the island’s secrets for an exclusive scoop. As you explore the island, you come across Filbo, the Snaxburg mayor. Filbo informs the player that Lizbert has gone missing, and the town has disbanded after a series of earthquakes and disagreements among each other. You’re asked to bring the disgruntled townsfolk back to Snaxburg to help piece together the history of Bugsnax and find out exactly what happened to Lizbert. 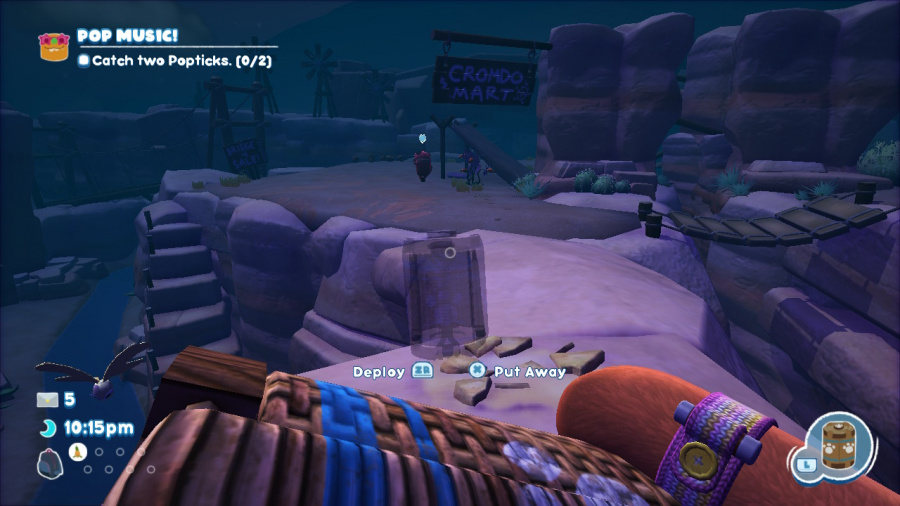 The plot, while simple, does its job nicely, especially in the game’s finale, and each of the characters you meet along the way are expertly voiced. However, oftentimes it’s the writing that misses the mark. Up until the very end of the game, the characters are incredibly one-note, which is disappointing as such a large emphasis is placed on them and their backstories. There are a few instances where the game tries to force you to spend time with these characters at parties in between the game’s chapters, but it comes off as far more intrusive than charming. It is only in the game’s final moments where the story picks up and the characters start to show any sort of uniqueness. It’s clear the developers wanted you to fall in love with these inhabitants, but in execution, they were far too generic to care about.

For those confused about what a Bugsnax even is, they are a group of snack-themed creatures with googly-eyes that inhabit the Island. Each species is designed excellently, and they range from the Crabble, a crab-apple hybrid, to the Weenyworm, which is just a hot dog with googly-eyes that acts like a worm. Eating a Bugsnax turns the limb of whoever eats them into a piece of food. While eating Bugsnax is a central theme of the game, it is largely a superfluous addition that boils down to some glorified townsfolk customization, which was very disappointing for one of the game’s biggest selling points.

There are over 100 species of Bugsnax to catch, each behaving in a unique way, making capturing them a puzzle in itself. Despite the large number of Bugsnax, it’s frustrating to see such a large number of recolored Bugsnax. For instance, the Peelbug, which is citrus peel-themed, has four different variants (green, orange, yellow and red). In reality, the number of truly unique Bugsnax you’ll encounter is far fewer than 100, which is a real shame. 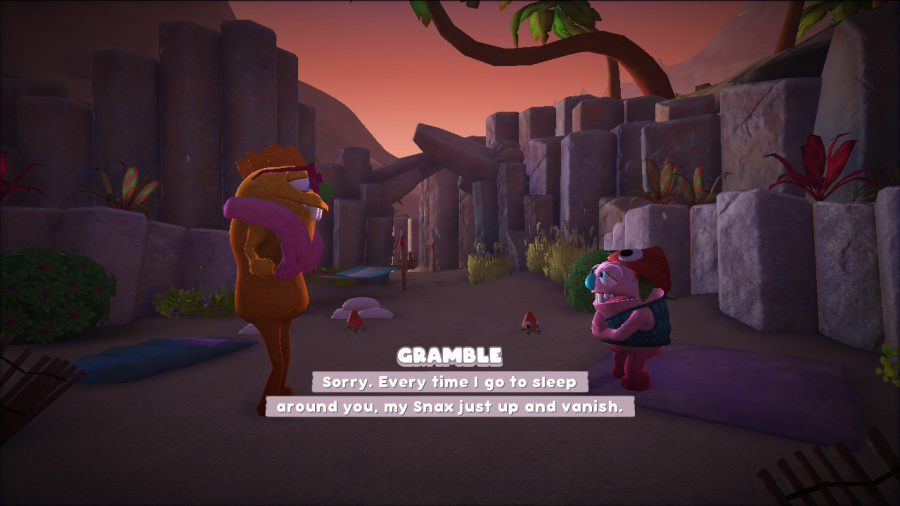 As you explore Snaktooth Island, you’ll find beaches, forests, deserts, and frozen tundras. Each locale has unique species to find, and you’ll need to use a variety of gadgets to capture them all. You can use your SnaxScope to scan wild Bugsnax to add them to your journal, and doing so also reveals the general path they follow, giving you an edge in your Bugsnax hunt. As you progress through the game, you’ll gather more tools, like a slingshot and a portable spring. The vast majority of Bugsnax you see in the wild are not required to complete the game, only the ones requested by certain townsfolk to convince them to return to Snaxburg. Since most of the quests follow the exact same formula of catching one and turning a body part of a character into a snack, things can quickly get stale and repetitive.

Despite the prospect of catching 100 different Bugsnax, the game never fulfills its true potential in the gameplay department. It’s relatively short, taking roughly 5 to 6 hours to clear the main campaign. While the included free DLC content adds another land to explore, as well as some new content in the form of new side quests, a customizable home, and an adorable hat mechanic for your Bugsnax, the package still feels as though it is lacking in substantial content.

Another lackluster element comes from the nauseating controls. Movement and general control feel very loose, worsened by the fact you’re playing in first person. At times, it feels as though the movement is coming straight from an early 3D platformer or a tech demo, with no environmental feedback and unrefined physics. Gadgets, while fun to use, are often more of a headache to get working the way that you’re expected to use them. For instance, one mission has you using a laser pointer to lead a Strabby in a hamster ball through a race track. The lack of precision in the control scheme made this challenge incredibly frustrating, despite how simple the task at hand was. Combine the aggravating controls with a far too vague hint system on how to catch certain Bugsnax and you get a game that we enjoyed in short bursts with an incredibly patient mindset. 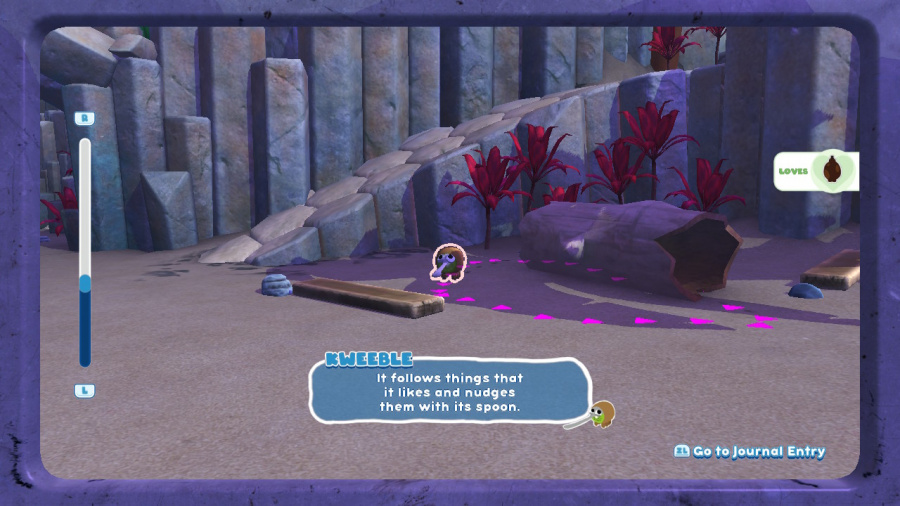 The Nintendo Switch version is also prone to some serious performance issues. Objects are constantly popping in, which can get incredibly jarring for some of the game’s more open locales. Similarly, the game’s loading times in between areas are incredibly long, sometimes over 30 seconds, completely destroying any sort of flow. It is also worth noting that the game soft-locked several times during our time with it, forcing a reload of a previous save. And while not a dealbreaker, textures are also much lower resolution than you might expect, especially on the environment and shadows. While these issues may be a suitable tradeoff for some in order to have Bugsnax on-the-go, the technical issues here may be enough to look at playing the game on other platforms besides the Switch. We’re told the team is aware of some graphical and physics issues with the non-PlayStation versions, so hopefully some of these will be addressed with patches.

Bugsnax is a game that is brimming with potential, but struggles in actual execution. Capturing hundreds of adorable snack-themed creatures sounds like such a great idea, but the lack of memorable characters, a frustrating control scheme, repetitive gameplay and numerous technical and design problems, particularly on Switch, makes for a somewhat lukewarm experience. There is certainly fun to be had here, but once you’ve played for a few hours, the magic fades and you’re left with a disappointing game that doesn’t live up to expectations.

How to unlock the Garden of Endless Pillars domain