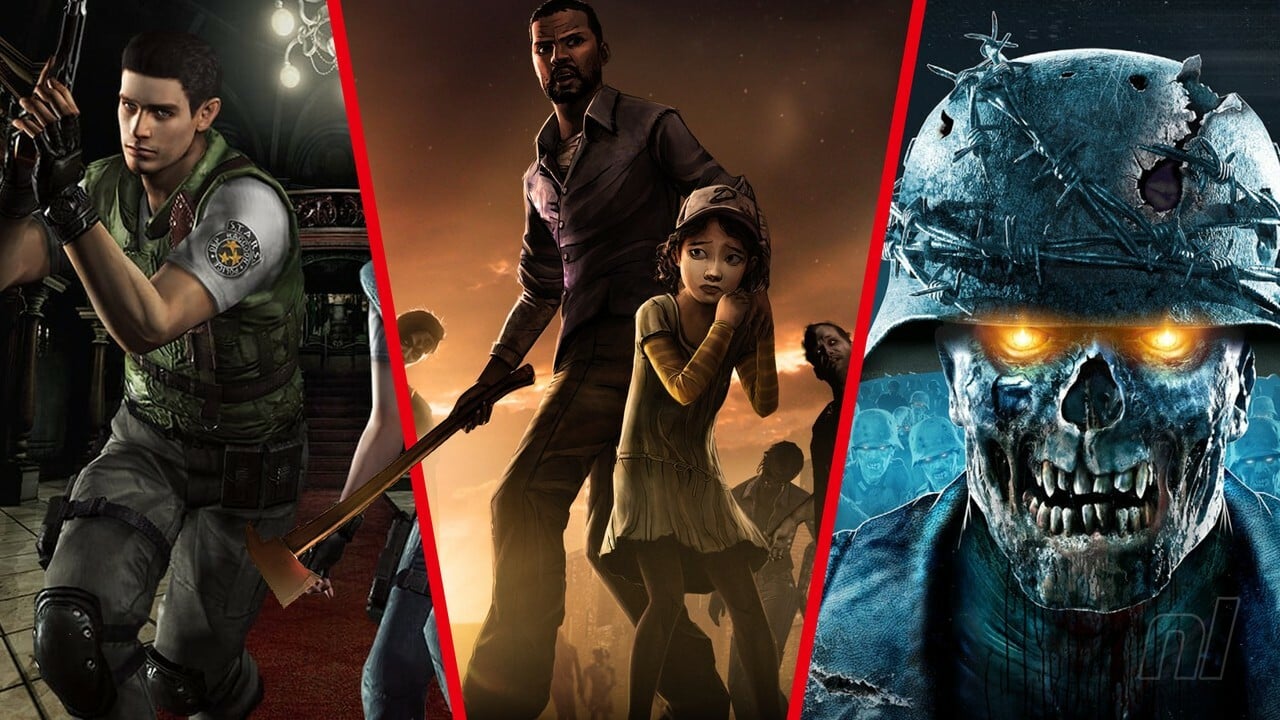 Every decade or so, something big happens to bring zombies back into our lives. Whether it was the release of George A. Romero’s Dawn of the Dead in 1978, the publication and subsequent adaptation of The Walking Dead, the hugely popular ‘Zombies’ mode in the Call of Duty series, or the meteoric rise of The Last of Us, we love a date with the undead.

This fascination with these brain-munching beings has inspired games by the boatload. Yes, there are the two aforementioned series, but the list of great zombie games goes on. The Switch, for the most part, has steered clear of these big titles. There are a lot of zombie games on the console for you to sink your teeth into, but the number of them that we would actually recommend playing? That’s a much shorter list.

A zombie invasion is all about preparation work, so we are going to hammer up the following boards across the doorway before we bunker down. Firstly, what do we mean by a ‘zombie game’? There was a lot of debate on this one, but we decided that we were only going to include games where the zombies are the focus. If we started banging every game with zombie-like creatures onto the list then we would be here for days and we couldn’t, with good conscience, go saying that something like Minecraft is one of the best zombie titles on Switch now, could we?

This leads us on to our second board: what do we mean by ‘zombie’? We can’t just focus on the green, peeling skin kind, but, again, if we were to add anything that staggers after you with its arms stretched out front then we could go on forever. So, we have chosen to focus only on titles where the enemy is indisputably zombified. Reanimated corpses or infected living hosts, we need to look at these guys and say, undeniably, “yep, that’s a zombie”

With the bunker prepared, it’s time to dive right into the crème de la crème (or should that be ‘braín de la braín’?) of zombie games on Switch: 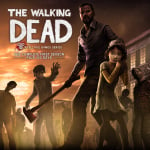 The Walking Dead might just be the most prominent piece of zombie media of the past decade. Between the comics and the series, the franchise has long held the genre in the palm of its decaying hand. While the Telltale series of games may have always seemed like the younger brother of the trio, they are no worse because of it. Set in the same universe as Robert Kirkman’s Rick Grimes, The Complete First Season is awash with fantastic storytelling, voice acting and character development and it plays beautifully on the Switch. Based on the technically-improved version that came to PS4 and Xbox One, this is the best version of where the Telltale series all began, and what a ride it turned out to be. 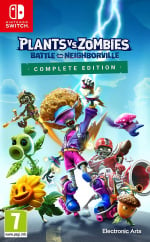 Who says zombies can’t be fun for kids? Well, give them a novelty weapon and send them into a war against a team of plants (the zombies that is, not the kids) and we dare you not to have a good time. The online shooter model wasn’t the first expansion that sprung to mind when we were playing the original Plants vs. Zombies mobile game back in the day, but hey, if the shoe fits. The game plays about as well as you would expect it to on the Switch, but with heaps of content and customisation options, this is a great choice for those who want to see zombie games from the other side of the line. 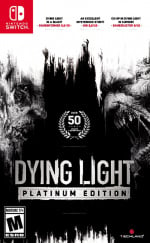 Dying Light Platinum Edition is one of those Switch ports that you never thought would be possible. While it might not play quite as well as some of the bigger boys in console gaming, it does work on the Switch and it is still great. The world is absolutely packed full of zombies, making it a genre entry unlike any other on the console. Whether you are fleeing from a hoard or using any blunt object imaginable to maintain an element of stealth, there is a real tactility to the undead on display and a masterful feat of bringing a big ol’ game to a portable device. 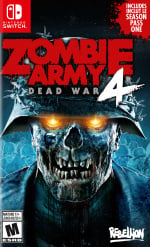 You know exactly what you are getting with Rebellion Switch ports and Zombie Army 4: Dead War is no exception. This is yet another port that feels like it shouldn’t work on the Switch, but actually runs remarkably well. You’ll be taking on hoards of zombies from all angles in any method that you see fit. There is guts and gore a-plenty so this isn’t one for the faint hearted. If, however, you wanted to boil the genre down to its basic components (zombies and killing them) then you need look no further.

It seems only fitting that this list should cover both where the Telltale TWD series starts and where it ends. The Final Season might not pack quite the same punch as its predecessors, but it still serves as a clear reminder that when it comes to all-things zombie, in Kirkman’s material we trust. This last entry continues the choice-driven gameplay to the bitter end and it therefore lacks some of the trigger-mashing action that many look for in the zombie genre. If, however, you are in for a story about life in the apocalypse, then this series is a must-play.

This is yet another example of a game that lets you live through a zombie apocalypse rather than simply just shoot your way out of it. Death Road To Canada is all about making a life for yourself as you attempt to escape the zombie-infested country. There will be supermarket dashes and human clans to negotiate with, but where the game really succeeds is how it lets you shape the narrative to your satisfaction. With an endless number of possibilities in character perks and team builds, this is one for those who want to see the apocalypse from all angles. 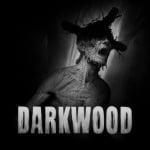 Darkwood is perhaps the scariest game on this list. The number of jump scares and disturbing images are kept to a minimum, but where this game really succeeds is in getting under your skin and sitting there throughout the entire playtime. You will be peering into dark corners (did something just move over there?) and listening to painful silences that come in-between the moments of tension. Don’t get us wrong, when Darkwood gets disturbing it really goes whole hog, but it’s the chills that make this one to remember. 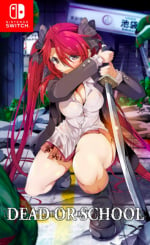 It is true, the mutant antagonists in Dead Or School might not be your typical zombies through and through, but with their stumbling hoard movements, bite-y tendencies and physical appearance, they very much give off the zombie vibes that we are after. Combine this with a combat system that is all about taking these monsters out head-on and you have a title which can easily fall into the category of ‘zombie games’ without much hesitation. The game itself is janky and suffers with some performance issues it is true, but the fun that can be had with this one makes its shortcomings easy to overlook. 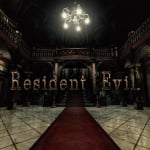 You didn’t think we’d forget this one, did you?

For many, the first Resident Evil is the definitive zombie game. This 2019 Switch port (leaning heavily on 2002’s GameCube ‘REmake’) has all the hallmarks of a classic survival horror and that’s arguably because it invented them in the first place. Long corridors, quick-solve puzzles, B-movie vibes and an overwhelming number of zombies make this a prime candidate for the Granddaddy of the genre. Yes, the tank controls are still tricky to get your head around and some hair-pulling inventory management may be more off-putting than the zombies themselves to many, but it’s worth bearing in mind that this isn’t a modern game. It is a product of its time and we love it all the more because of it.

There are, of course, a number of games that deserve an honourable mention in this category. 2022’s brilliant survival horror Signalis has all the hallmarks of a great zombie game, albeit with a focus on robots rather than flesh and bone. On the other end of the spectrum sits Inside, a title which has zombified sections with the best of ’em, but there is too little there for it to be a ‘zombie game’. Then we have the likes of Dark Souls and Minecraft. which are both packed with zombies and the undead. We cannot pretend, however, that either one fits the bill of a ‘zombie game’.

Well there you have it, our rundown of the very best zombie games on Switch. While the console might not be the first port of call for spending some time with the undead, there remain plenty of titles that you can enjoy nonetheless.

Grab your baseball bats and shotguns and let us know of your favourite zombie game on Switch in the comments below!

WWE 2K23 Will Reportedly Be Announced Later This Month