BATMAN: BEYOND THE WHITE KNIGHT #1 & #2 COLLECTED IN SHOWCASE EDITION

**SPOILER ALERT!** The Joker is alive AND Harley Quinn is married to Bruce Wayne?! A lot has happened in the first two issues of Batman: Beyond the White Knight from writer and artist Sean Gordon Murphy.

After fan excitement led to sell-outs of two printings of the first issue and the recently released second issue, DC will be collecting the two issues for fans to get caught up on the series in a Showcase Edition in prestige format. The new printing, available at local comic book shops on Tuesday, May 31, features a new cover done by Murphy that will be revealed the week of May 2.

Batman: Beyond the White Knight #1: A lot can change in 10 years, especially in Gotham! Batman, a.k.a. Bruce Wayne, may be behind bars, but the real criminals are still out there. Gotham Motors CEO Derek Powers has seized control of the Wayne family’s assets and is using them to transform the GTO and the city they’ve sworn to protect. Crime is down, but at what cost? A new Batman has emerged in Powers’s city, and only Bruce is fully aware of the dangers to come. It’s time to destroy the mantle for good, but he’ll need one of his forgotten sons’ help to do so. Enter Jason Todd…the first Robin?! In this thrilling sequel to the blockbuster comic book hits Batman: White Knight and Batman: Curse of the White Knight, writer/artist Sean Murphy invites the audience to go beyond the Gotham they know to discover an engrossing new take on the city and its heroes. Welcome to Neo-Gotham and the world of Beyond the White Knight!

Batman: Beyond the White Knight #2: The humble beginnings of Terry McGinnis are revealed as Bruce Wayne becomes Gotham’s most wanted man! With the GTO on the case, does Captain Dick Grayson have what it takes to bring down his old mentor? It’s father versus son in the next chapter of this fan-favorite series! Plus, an unexpected ally from Bruce’s past could hold the key to saving the future. Harley Quinn is back and ready to knock you out! Go beyond the Gotham you know to discover an engrossing new take on the city and its heroes. Welcome to Neo-Gotham and the world of Beyond the White Knight! 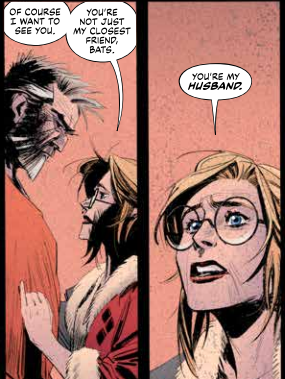 The third issue of Batman: Beyond The White Knight will be available at local comic shops on Tuesday, May 24.

Batman: Beyond the White Knight #3: The future of Gotham is coming to destroy its past! Batman…murderer? After discovering Bruce Wayne facilitated the murder of his father, Terry goes on the hunt, ready to unleash as Batman Beyond. The clock is ticking for Bruce in more ways than one after Harley Quinn’s daughter goes missing. And if she takes after her father, the fate of the city is in her hands! Can the former Batman find and stop her before the police do?

BATMAN: BEYOND THE WHITE KNIGHT SHOWCASE EDITION
Issues 1 and 2
Written by Sean Murphy
Art and Cover by Sean Murphy
Colors by Dave Stewart
5.99 US | 48 PAGES

For the latest information on BATMAN: BEYOND THE WHITE KNIGHT, visit the DC website at www.dccomics.com and follow @DCComics and @thedcnation on social media. The DC UNIVERSE INFINITE digital subscription service is your one-stop spot for a host of classic and memorable stories featuring Batman; for more information and to subscribe, check out the website at www.dcuniverseinfinite.com.

This is How FFXI Prishe Will Look in Granblue Fantasy