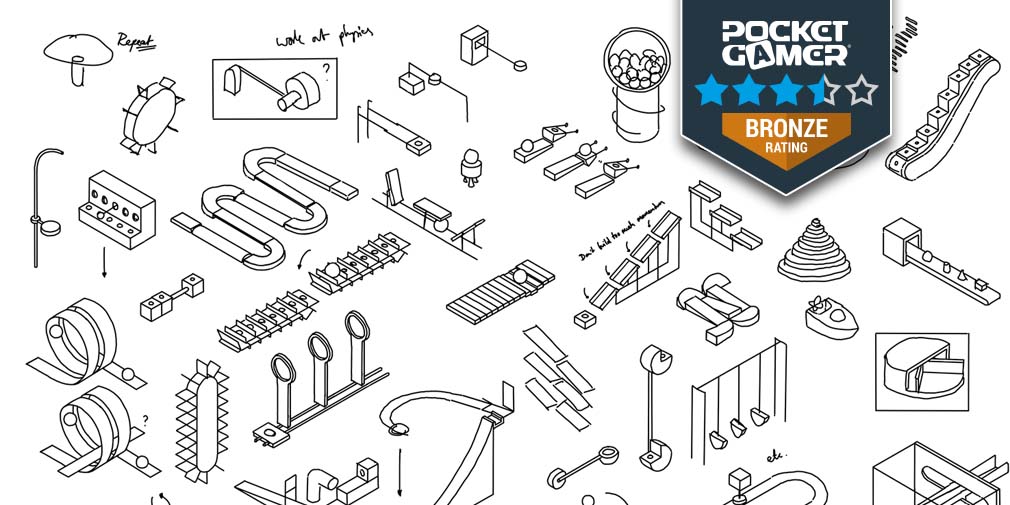 When the servers are down and the power is out, finding a toy to tinker around with until your internet connection pops back up is nearly impossible these days. Back then, tabletop toys were all we really had, and in Automatoys, you’ll get that rare chance to turn back time to the simpler days of tactile fun – clicking and clacking included.

Laid out like an actual toy made of cheap plastic and loaded with nostalgic vibes, Automatoys looks (and feels) absolutely stunning. The graphics capture the essence of these seemingly simple yet complex mechanisms optimised for mobile, and all you have to do is tap the screen to quite literally get the ball rolling.

Each machine or level features a single goal of getting your ball from Point A to Point B, but all the obstacles along the way are designed so meticulously that you’ll really have to pay close attention to every single lever, screw, pinball flipper and rotating circle thingy. The variety of mechanisms to figure out and experiment with as you go along really does tap into your inner child, wide-eyed and curious and laser-focused on discovering what this shiny new thing does or doesn’t do.

In that sense, the visuals are so darn effective that they’ll make you feel like you’re playing with a physical toy as opposed to just pixels on a screen.

When it comes to the actual mechanisms, you’ll start off the first three levels with simpler what-have-yous, while the rest of the game requires $2.99 or your local equivalent to unlock. There are only 12 levels in total, with each new machine offering something fresh and exciting to tease your brain cells.

Tapping on the screen helps you navigate through intricate pathways, whether you’re tilting a ramp or practising the art of precision timing with mini-catapults. The puzzles come with frustrations, of course, as one wrong move might send you spiralling down into the abyss where you’ll have to start all over again. These can either make you ragequit or set you back on track with a more determined outlook – either way, you can aim for three stars if you’re a completionist or cruise on by just getting through from one level to the next.

The tactile experience is really the star of the show here. There were plenty of times when I found myself tilting my phone and craning my neck to see if I could rotate the thing around like I would an actual toy. It’s this kind of immersion that makes the game shine – although I do wish you could freely move the angle around to get a better perspective of where your ball is going.

Thankfully, you can easily check if it’s your cup of tea with the first free levels. The casual physics-based puzzler also serenades you with a lo-fi soundtrack in the background (which you can listen to on Spotify), so if you’re looking for a nostalgic time-waster, Automatoys might just be worth the extra penny.

Where To Find Ghost Glovewort 8