It doesn’t matter how well you hide, there’s just no escaping the stealth genre these days. In addition to a steady deluge of dedicated stealth games, it seems like every other AAA adventure has the player creeping around at some point. Despite this stealth oversaturation, the indie ninja game Aragami managed to make a bit of a name for itself back in 2016 thanks to its old-school charms and a few clever twists on the standard sneak-and-stab formula.

Five years later, the stealth market is as flooded as ever, and yet, here’s Aragami 2 hoping to carry on the original game’s surprise success. Does Aragami 2 have what it takes to slice through the competition or are its weaknesses all-too-visible this time? No sneaking around, time to tackle this one head on…

Aragami 2 ostensibly happens in the same universe as the first game, but this is largely a soft reboot, taking place 100 years after the original with a new cast of characters. While the first game cast players as a specific character named Aragami, now you’re simply an aragami, a warrior who has gained immortality at the cost of a piece of their soul. There’s a whole village of aragami now and more who are being enslaved by the Akatsuchi Empire, who are looking to take over the Rashomon Valley where aragami live. It’s up to you to stop that while uncovering the Akatsuchi Empire’s aragami-related schemes. The story serves up a decent number of twists, turns, and machinations, but neglects to provide a reason to actually care about what’s happening. Aragami 2 is much less character-driven than its forerunner, and as a result, it never really got its hooks in me.

Aragami 2’s visuals are unquestionably a step up on a technical level, featuring larger environments, sharper textures, and more advanced lighting, but honestly, I liked the more stylized look of the previous game a bit more. And, of course, “step up” is a relative term – this still largely looks like an HD PS2 game. At least the game’s Japanese-inspired soundtrack is once again excellent. 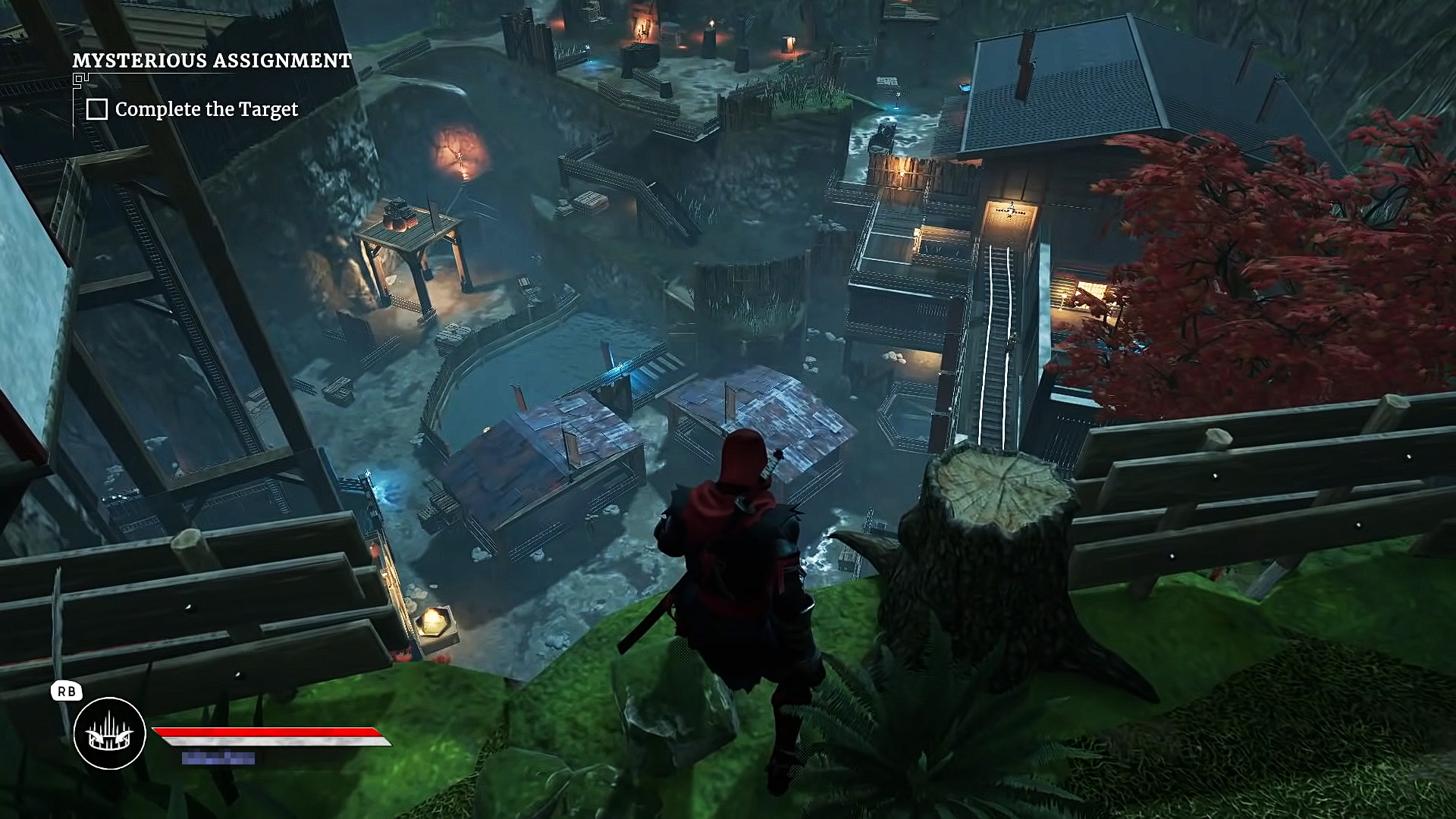 At first glance, Aragami 2 may seem a lot like its predecessor in terms of gameplay, but it actually feels quite different. The first Aragami limited your basic abilities, forcing you to focus heavily on your inventory of special skills, but now you’re much more capable. For starters, you can actually jump this time around! Heck, you can double jump and perform a mid-air Shadow Leap, allowing you to instantly grapple onto the edge of buildings, fences, and other convenient ledges. It definitely feels like the folks over at Aragami developer Lince Works played a bit (or a lot) of Sekiro: Shadows Die Twice while making this sequel.

In addition to the added mobility, certain abilities you had to unlock in the original game like your ninja radar vision and ledge kills are now standard issue alongside other welcome improvements like being able to easily pick up and stash bodies. All these skills are now tied to a quickly-regenerating stamina bar or a simple cooldown timer, replacing the old system where you had to lurk in the darkness to recharge your “Shadow Essence.” A few new skills have been added, like the handy Warp Strike that lets you immediately jump to and dispatch an enemy, and some favorites like Shadow Kill return, but overall, the game is less about combining powers and more about thinking fast on your feet. 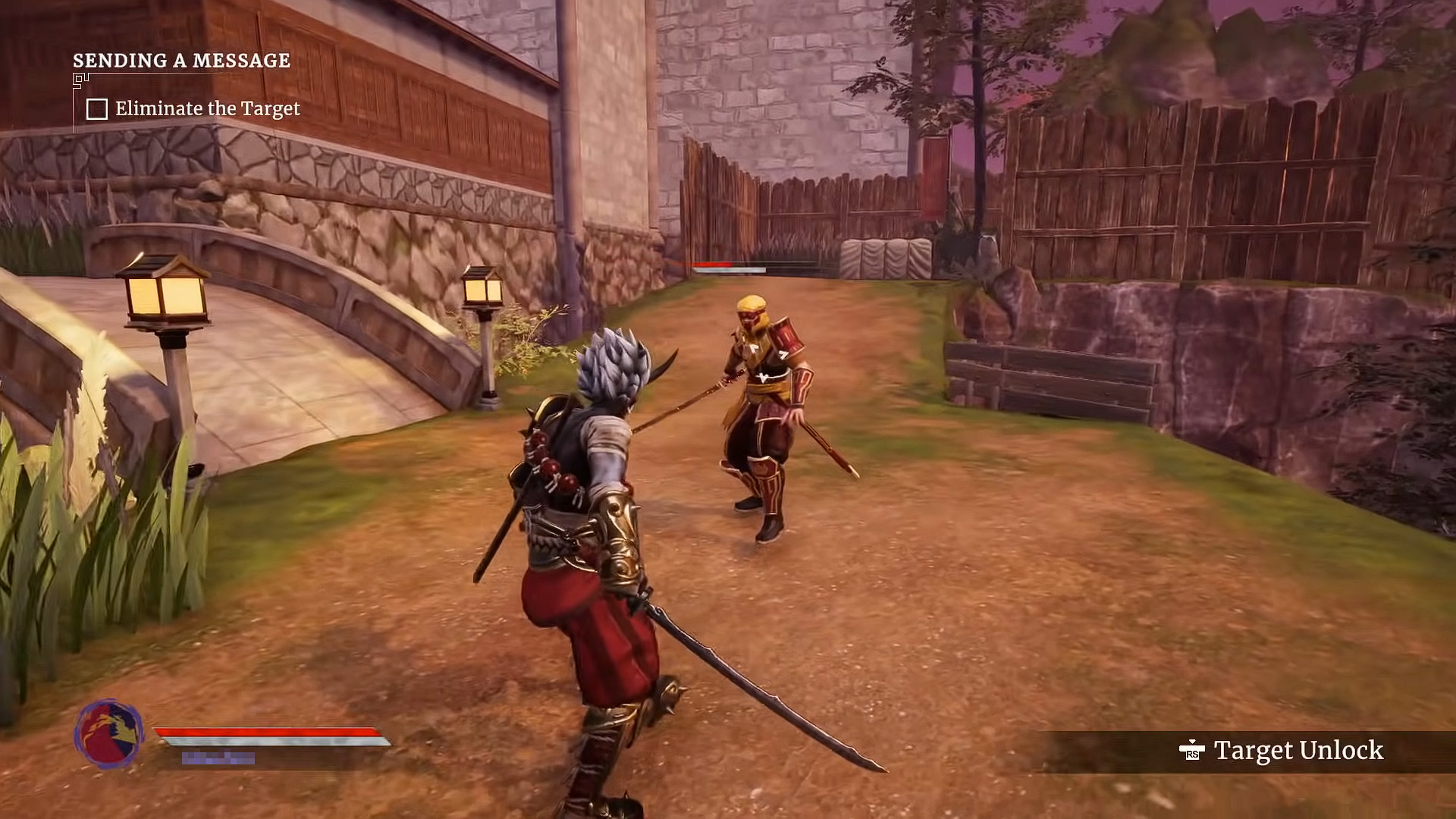 Speaking of which, yes, when the bad guys spot you, you now have the option to fight back. The combat is essentially a dumbed down version of Sekiro’s system, as you’re aiming to deplete an enemy’s stamina in order break through their guard and land a killer strike. Honestly, it’s not terribly fun, but it works in a pinch and makes Aragami 2 more forgiving and less frustrating that its predecessor.

This somewhat more lenient approach also applies to Aragami 2’s mission structure and checkpoints. While you can expect around the same number of levels as the first game, you’ll now revisit each one multiple times. Lince Works has come up with an impressive array of objectives for these missions and the levels are designed to be tackled from multiple angles, which keeps things feeling fresh. Death sends you back to where you entered the level, but in another Sekiro-inspired touch, you now get two chances to complete any mission. When you die the first time, all your progress and kills are retained, and it’s only after two deaths that it’s truly Game Over. It’s a smart twist, that takes some of the bite out of the usual stealth formula as you’re given a chance to potentially rethink your strategy from a new angle. 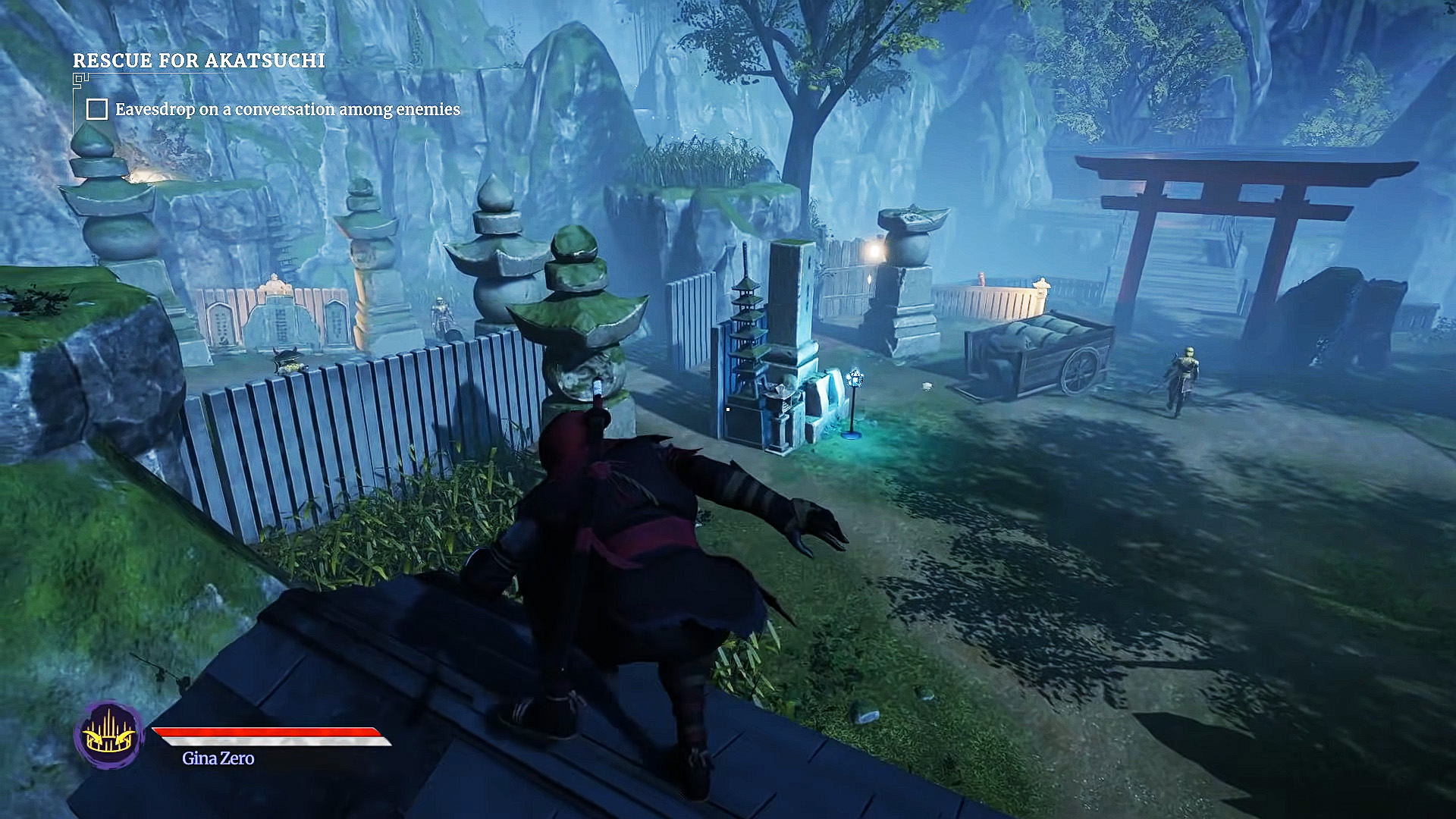 So yes, Aragami 2 does bring a number of new things to the table, but at its core, it’s still a pretty typical stealth game. You hide in tall grass and shadows, watch bad guys walk their paths, and pick them off one by one. Unless you just took up gaming last week, you’ve done this before. Lince Works has promised Aragami 2’s AI is smarter than before, and it is, but let’s be real… it’s still pretty dumb. Enemies still seem to have no peripheral vision, never look up, and don’t notice when their friend dies a horrible bloody death five feet behind their backs. They will give you a bit of a chase if they spot you, but “climb up on a roof” is usually a foolproof escape plan.

These may sound like complaints, but they aren’t necessarily. Gullible enemies are a time-honored stealth tradition and taking out half-a-dozen of the dummies before they know what’s going on is empowering. Honestly, a lot of modern stealth games ruin the fun by making their bad guys too smart. Aragami 2 also does a good job of rolling out a steady stream of new levels, objectives, and enemy factions so that things never become too predictable or easy. 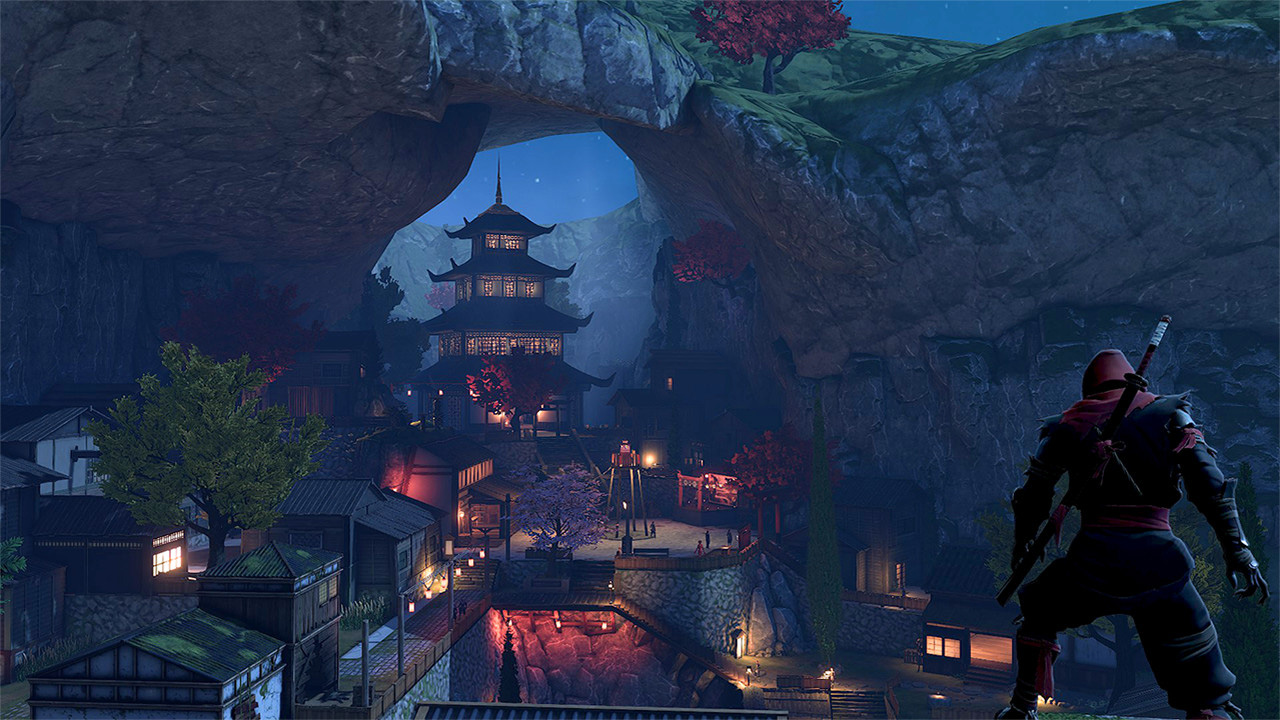 I certainly had fun with Aragami 2, but I can’t say I was ever surprised by the game. I never felt particularly connected to its world. After playing through way too many half-baked AAA game stealth sequences, the basic competence on display in Aragami 2 was refreshing, but the genre is in the same place as 2D platformers at this point – you have to do more than just get the basics right to score top marks when there’s so much competition out there.

But hey, if retro-flavored stealth is what you’re looking for, you’ll get plenty of it here. Aragami 2 felt around twice as long as the original game, and there are plenty of collectibles, cosmetics, and high scores to go back for. You can also play Aragami 2 with two other players co-op style (the first game only featured 2-player co-op), which is a bit chaotic, but fun in its own way. You’ll be well-acquainted with death by the time you wrap up everything this one has to offer.

This review was based on a PC copy of Aragami 2 provided by publisher Lince Works. You can grab the game at a small discount pre-launch.

Aragami 2 is another enjoyable sneak ‘em up and a solid improvement over its predecessor, but an overfamiliar world and mechanics make it hard to get too excited about the game. Aragami 2 gets the job done cleanly and efficiently, and is worth a shot if you’re into old-school stealth, but its memory may quickly fade into the shadowy recesses of your mind.

Pokemon GO could be the best game in the metaverse