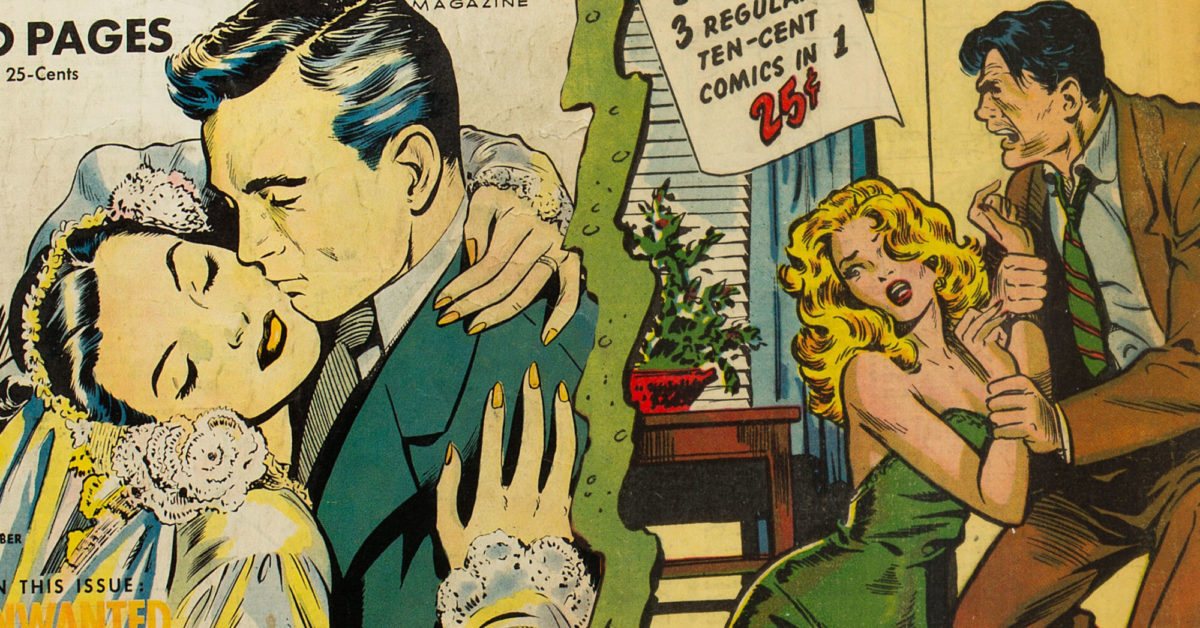 Giant Comics Editions was certainly not the only giant-sized square-bound rebound material series that St. John Publications released.  The publisher must have had some success with such repackaging, as they went back to the technique often.  In 1952, St. John somewhat confusingly used various permutations on “All Picture” and “All True” branding for a number of rebound giant-size issues.  These included All-Picture All-True Love Story, All-True All-Picture Police Cases, and All-Picture Adventure Magazine. Each of these weighed in at 100 pages of material with a cover price of 25 cents.  Like Giant Comics Editions, none of these are particularly easy to get, but one of them is so tough that even the Overstreet Price Guide didn’t know it existed for 30 years.  But All-Picture All-True Love Story #2 does exist, and you have an incredibly rare chance to get an All-Picture All-True Love Story #2 (St. John, 1952) Condition: GD- as well as the other Baker-related 1952 St. John rebounds up for auction in the 2022 August 11 The Matt Baker Showcase Auction #40190 at Heritage Auctions.

As told in a 1999 issue of Comic Book Marketplace, All-Picture All-True Love Story #2 came to the attention of the collecting community at large when a copy appeared at an auction held by Dark Adventure Comics sometime shortly prior.  The auction went “straight through the roof”, according to the winning bidder Michael Browning, who then contacted Bob Overstreet and other vintage experts to document the find.  In the 23 years since then, only two copies have been graded by CGC.  The one at auction here is an ungraded raw copy.  There is also an All-Picture All-True Love Story #1 (St. John, 1952) CGC GD/VG 3.0 Off-white pages available, with only eight copies of that issue on the census.

While published details on issue #2 are scant, according to Browning’s original article on the matter, the issue contains “all-Baker reprints from Wartime Romances.” As for the cover artwork, this is another case for which expert opinion has varied. Many collectors think it’s a Baker cover, while some disagree.  This one is also a little trickier than most to identify stylistically because it’s essentially a portrait shot, without some of the clues that full-body drawings can provide.  And an awful lot that we see here — the hair, the details of the flowers, and the wedding dress — is likely down to the inker.  That said, while it’s a different sort of style than is found on something like the cover of Giant Comics Editions #15, for example, this All-Picture All-True Love Story #2 cover has the slick, elegant, somewhat minimalist inking style that looks very similar to the one used by regular Baker inker Ray Osrin on It Rhymes With Lust.  It may also have the earmarks of interior panel art that has been enlarged and reinked.

Absent definitive records of some sort, stylistic analysis is highly subjective and can only take us so far.  It also tends to evolve over time regardless.  So what does the publishing context of this issue tell us?  According to St. John general manager Richard E. Decker in the October 10, 1949 issue of Advertising Age, the company was set to release the first of its planned line of “picture novels” around December 30 of that year.  But it seems unlikely that It Rhymes With Lust was released anywhere close to that date.  Either The Case of the Winking Buddha came first at that time, or the schedule for It Rhymes With Lust slipped.

Given what we can deduce about Baker’s workload while at St. John, It Rhymes With Lust understandably disrupted his regular comics assignment levels for a significant period of time.  This disruption appears to have taken place from late 1949 through at least the first six months of 1950.  But by the time that was done and scheduling got back to normal as 1951 approached, Archer St. John and editor Marion McDermott unquestionably understood that Baker was their star.  Baker’s cover and interior work became very steady.  Through 1951 and beyond, St. John comic books that contained Baker interior artwork but did not also have Baker covers became rare.  It happened, but not often.  Because what’s the point of having your star work on the interior story but not the cover?  Taking the notion that All-Picture All-True Love Story #2 contained a significant amount of Baker material at face value, there would seem to be a high likelihood that St. John would have wanted a Baker cover on this issue. Of course, other factors can always come into play.  Schedule crunches happen, and other unknown issues can occur, but the context suggests a reasonable likelihood of Baker work underneath Ray Osrin inks or similar.

All-True All-Picture Police Cases #2 is the other stand-out among these 1952 St. John giants.  While this one seems to have some undeniable Bakerish elements, there’s clearly something else going on here too.  Also a case of reused/reinked interior art?  It’s impossible to say for sure.  This one does appear to be gaining traction among Baker collectors, however, and there are only four copies on the CGC census.

As with the earlier Giant Comics Editions, these 1952 St. John giants are tough to get and desirable, and there’s an All-Picture All-True Love Story #2 (St. John, 1952) Condition: GD- as well as the other Baker-related 1952 St. John rebounds up for auction in the 2022 August 11 The Matt Baker Showcase Auction #40190 at Heritage Auctions. New to collecting Matt Baker or want to learn more?  Bleeding Cool is doing an ongoing deep dive into the history behind Matt Baker’s comic book artwork in the run-up to this auction. If you’ve never bid at Heritage Auctions before, you can get further information, you can check out their FAQ on the bidding process and related matters.

All-Picture All-True Love Story #2 (St. John, 1952) Condition: GD-. Perhaps the rarest of all Matt Baker comics — we have only seen one copy prior to this, and that was way back in 2006! In fact, this book is so scarce that the Overstreet Price Guide was published for thirty years before they were even aware that it existed and added its values to the Guide! Baker cover and art. Contains 100 pages. There is a 2″ piece missing from the bottom of the spine. Overstreet 2022 GD 2.0 value = $77.

7 Cult of the Lamb Tips & Tricks for Beginners

Snyder & Francavilla’s Night Of The Ghoul Out Tomorrow, Gets Film Deal

Suit Yourself: Everything You Need to Know About Hardware